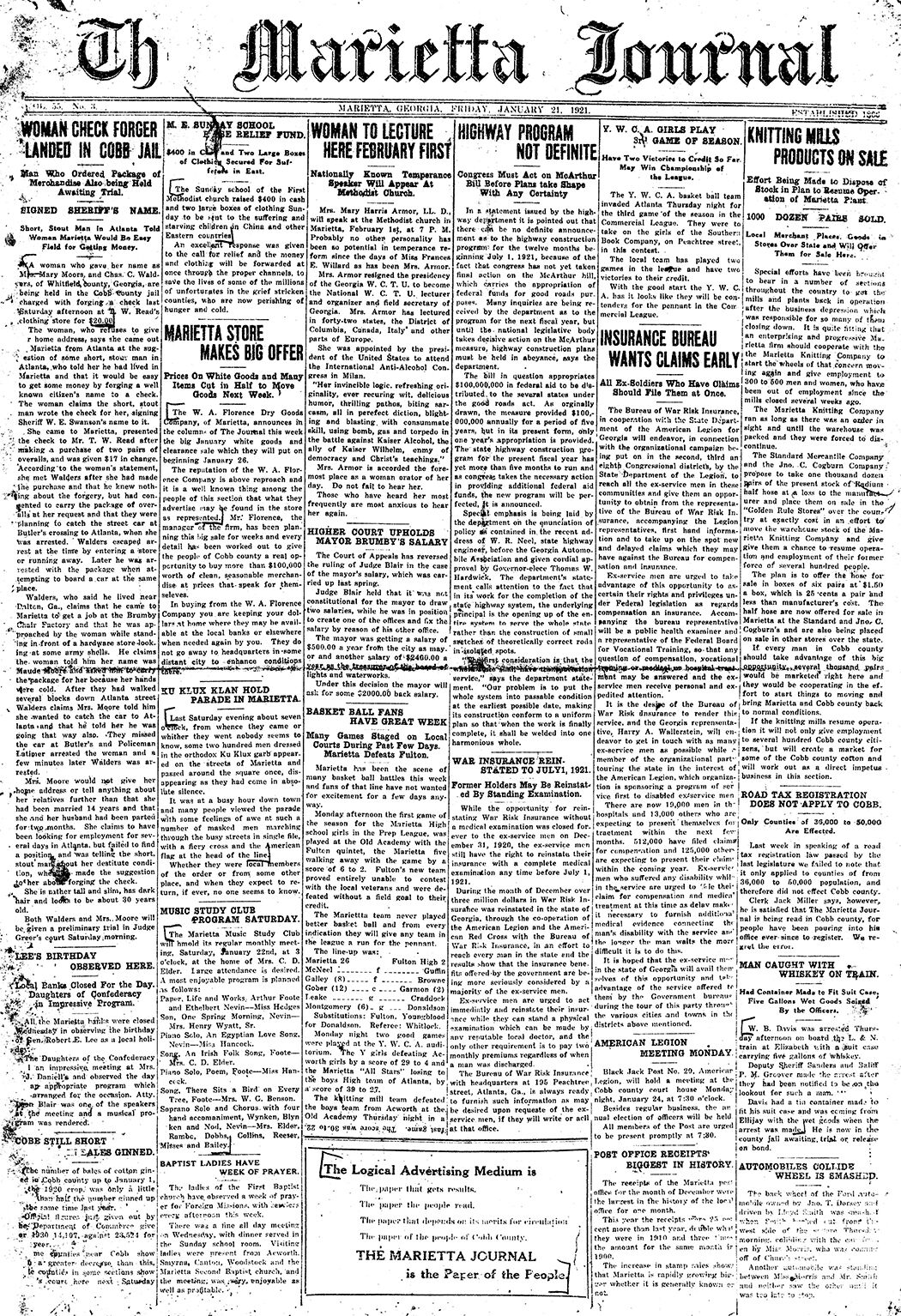 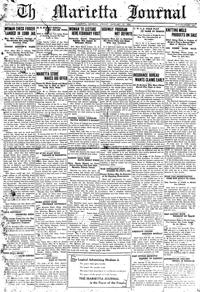 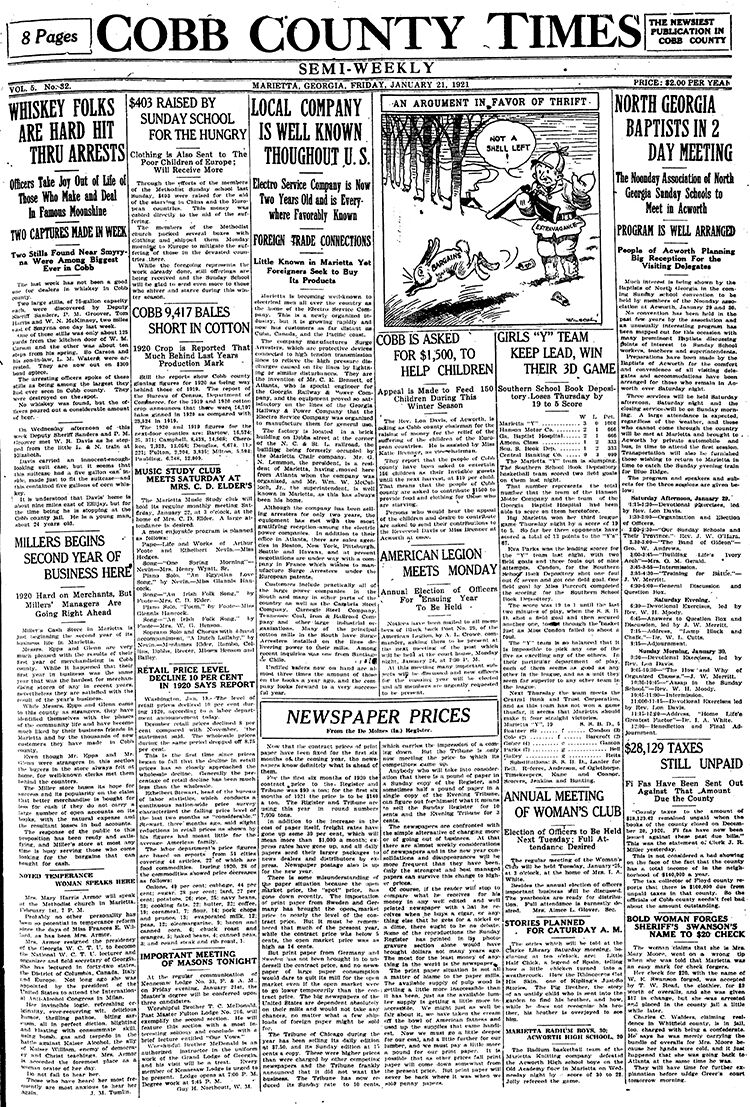 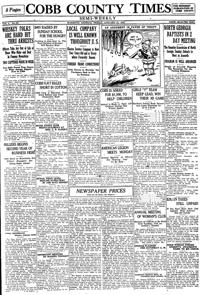 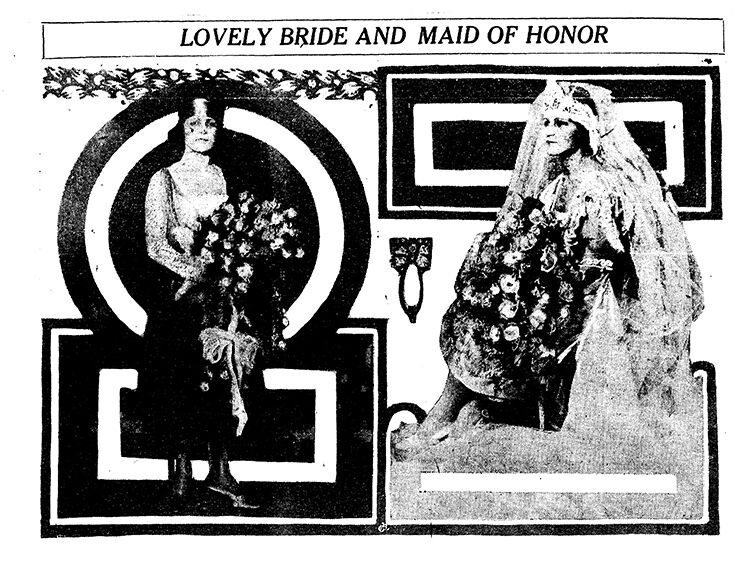 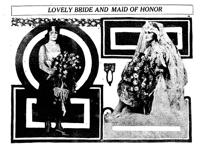 The Tuesday, Jan. 18, 1921, edition of the Cobb County Times had the above picture featuring Mrs. Robert Lynn Baker, right, whose marriage was “a brilliant event” of Saturday, Jan. 8, 1921, at “El Sitio,” her home near Marietta, and her sister, Miss Isabel Amorous, left. Mrs. Baker was Miss Rosalyn Amourous, daughter of Mr. and Mrs. Martin Amorous, and “one of a group of sisters who are numbered among the most beautiful young women in Georgia.” 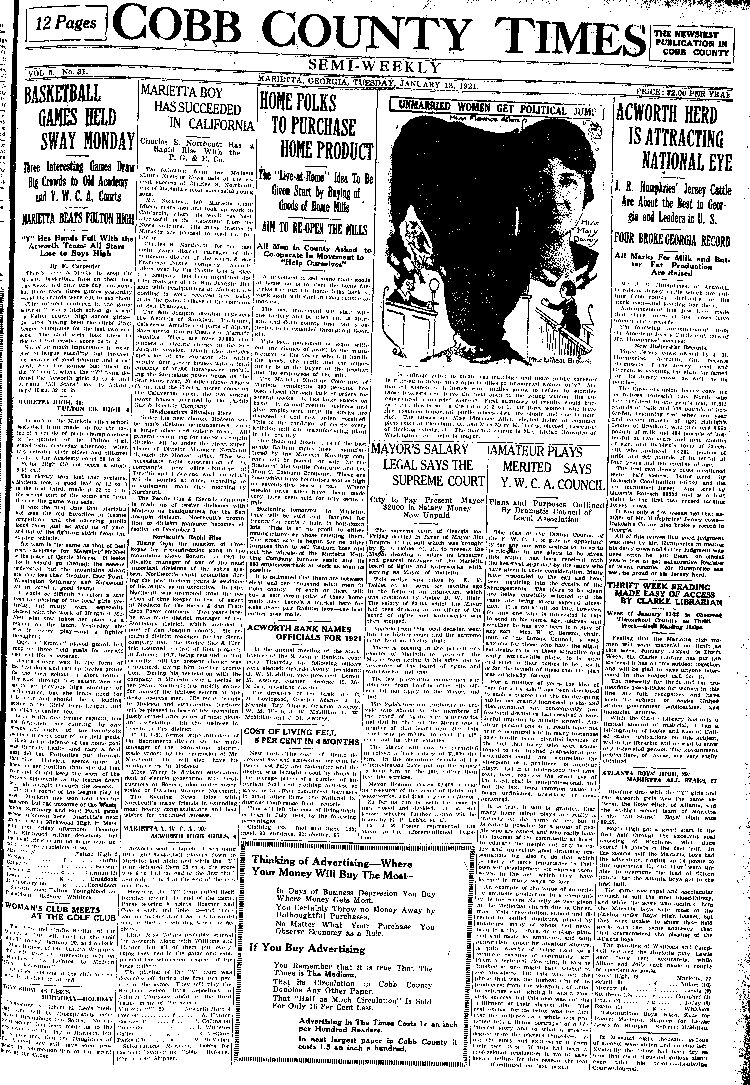 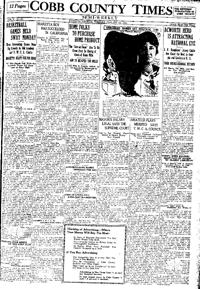 The Tuesday, Jan. 18, 1921, edition of the Cobb County Times had the above picture featuring Mrs. Robert Lynn Baker, right, whose marriage was “a brilliant event” of Saturday, Jan. 8, 1921, at “El Sitio,” her home near Marietta, and her sister, Miss Isabel Amorous, left. Mrs. Baker was Miss Rosalyn Amourous, daughter of Mr. and Mrs. Martin Amorous, and “one of a group of sisters who are numbered among the most beautiful young women in Georgia.”

The Tuesday, Jan. 18, 1921, edition of The Cobb County Times carried a story from The Modesto Evening News in California about the success of Charles S. Northcutt, who left Marietta 15 years earlier. He was recently appointed the district manager of the San Joaquin Division of the Pacific Gas & Electric Company, formerly known as the Sierra & San Francisco Power Company.

The Bureau of War Risk Insurance compiled some facts regarding the soldiers that made up the U.S. Army during World War I. There were 4,767,071 men in the armed forces. The first name on the index files was Bartholdt Otto Aabel of Nebraska and the last was Wladysslaus Chas. Zykes of New York. The longest name in the list was Harry Aolph Thomas Richard Eugene Bullock.

The Friday, Jan. 21, 1921, edition of The Cobb County Times reported that two large 75-gallon capacity stills were found by Deputy Sheriff Sanders, P.M. Groover, Tom Harris and W.N. McKinney two miles east of Smyrna the week before. One of the stills was 125 yards from the kitchen door of W.M. Carson and the other was 10 steps from his spring. The stills were destroyed on the spot, but no whiskey was found.

The Wednesday before, Sanders and Groover met and arrested W.R. Davis, 24, of Ellijay as he stepped off the Louisville & Nashville train at the Elizabeth station. Davis, who was arrested, had a suitcase that held a five gallon can of corn whiskey inside.

Mrs. Mary Moore forged a $20 check under the name of Sheriff W.E. Swanson. It was accepted by Marietta clothier T.W. Read for $3 worth of overalls and she was given $17 in change. She was arrested a little while later.

Over 800 veterans from Marietta and surrounding towns were reported in the Wednesday, Jan. 16, 1946, edition of the Marietta Daily Journal as meeting at the Larry Bell recreation center the night before to hear Lt. Col. J.C. Bishop outline his plans for a corporation to manufacture prefabricated houses in Marietta. A new organization comprised of veterans would build houses priced to sell for about $6,000, complete and ready for occupation. Bishop predicted that the enterprise would become a million dollar business by the end of the year.

The nation’s most feared strike — steel — was reported as becoming a reality in the Monday, Jan. 21, 1946, paper. Across the nation, some of the 750,000 United Steel Workers began picketing 1,300 huge, sprawling steel mills in 30 states. The walkout, which was the greatest in the country’s history at the time, was the Union’s answer to the giant United Steel Corporation which rejected President Harry S. Truman’s proposal of a $1.48 daily pay boost. Estimates were the steel strike would cost the nation 200,000 tons of steel a day, or enough to build 1,750,000 refrigerators.

In the Friday, Jan. 15, 1971, paper it was reported that illegal dumping in Cobb County was worse than ever. The county had already hauled away 126 dump truck loads from Ivy Road, Allen Road and North Cooper Lake Road and had begun work in the Black Hawk Hills subdivision. Over 200 cases had been made this year against people caught dumping illegally. Assistant District Attorney Anthony Arnold said the main excuse offered by offenders was that “everybody else does it.” Fines were ranging from $35-$100.

A lone gunman was reported in the Sunday, Jan. 17, 1971, paper as having hit the grocery department of the Richway Store on the South Four-Lane Highway just as the store was closing the Friday night before. The brazen bandit, who escaped with an undetermined amount of cash, walked into the store office confronting the night manager and four other employees with a pistol and had him fill up a pillowcase. The manager was taken hostage and forced to leave the store with the thief and his getaway driver. The manager was then let out unharmed in a wooded area near Windy Hill Road.