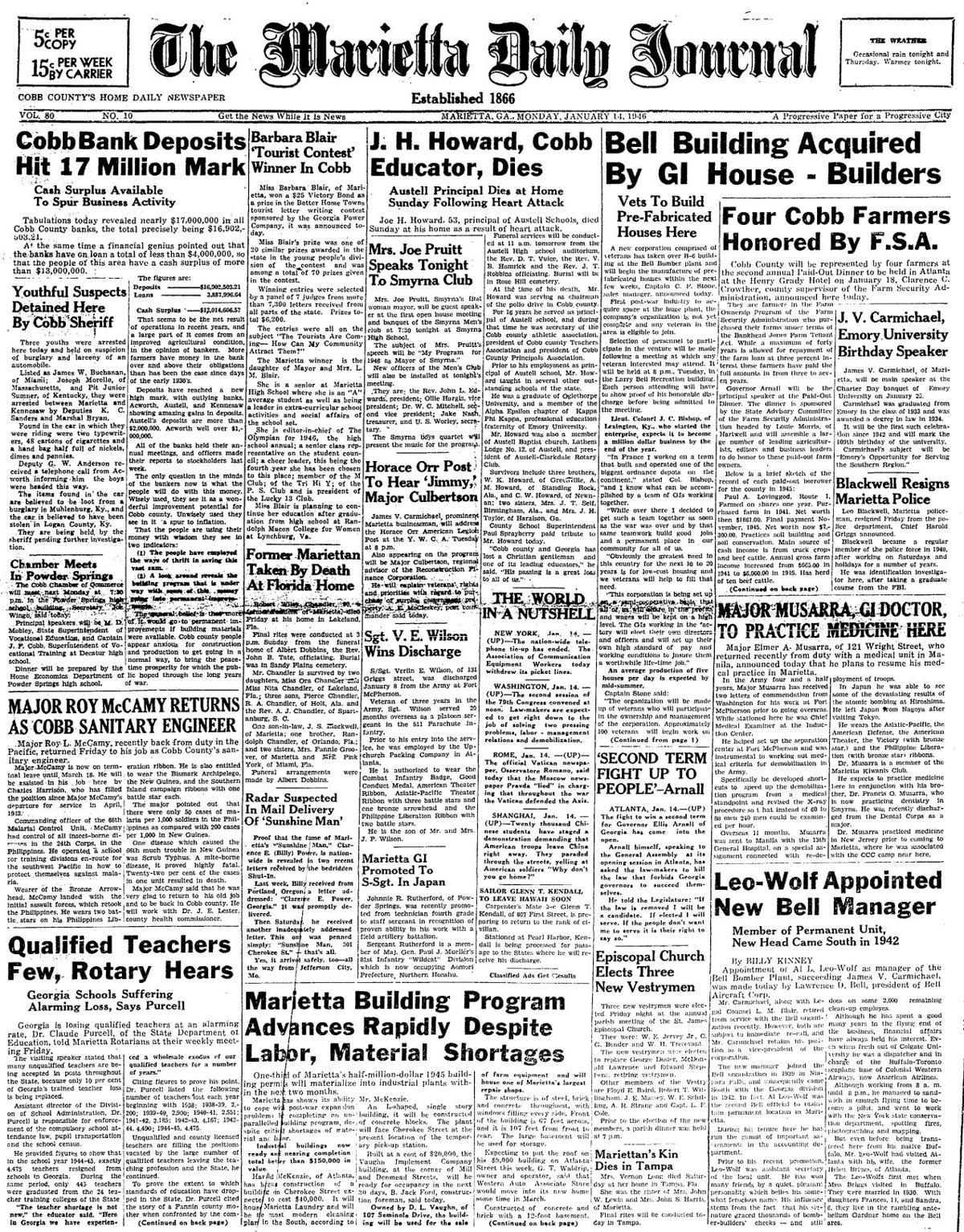 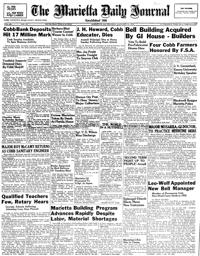 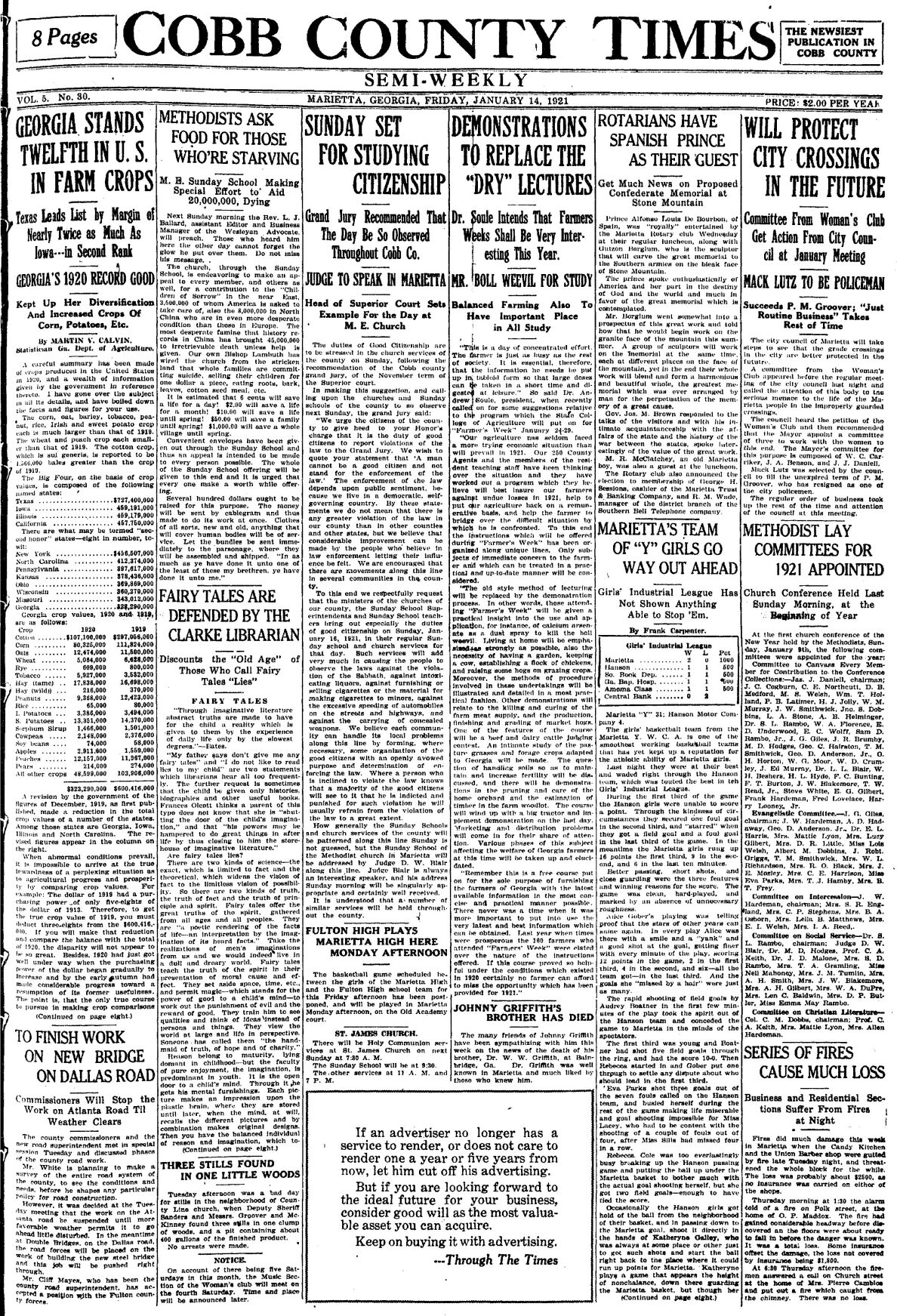 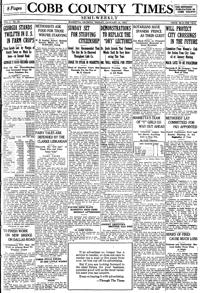 The Friday, Jan. 14, 1921, edition of The Cobb County Times reported that a member of the royal family of Spain was one of the Marietta Rotary Club’s guests at their luncheon the Wednesday before.

Prince Alfonso Louis De Bourbon, sculptor Gutzon Borglum and a number of the sponsors of the Stone Mountain Confederate Memorial visited Marietta. The group discussed a plan to raise money for the Confederate memorial by making a motion picture of the South and other parts of the country written by Prince Alfonso, who was a successful author.

The trip to Marietta included visiting the Federal and Confederate cemeteries in Marietta, Kennesaw Mountain and other battle sites in the area.

Deputy Sheriff Sanders and two others found three stills and a pit containing 400 gallons in one clump of woods in the neighborhood of County Line Church the Tuesday before.

The Candy Kitchen and the Union Barber Shop in Marietta were gutted by fire the Tuesday night before and the flames threatened the whole block for awhile. The loss was listed at $2,500 and neither shop had insurance.

A fire happened the Thursday before at the home of O.P. Maddox on Polk Street. The floors were about ready to fall in before the blaze was discovered. The home was a total loss. Later that afternoon, Marietta firemen also responded to a chimney fire at the home of Mrs. Pierre Cambloe on Church Street.

In the Tuesday, Jan. 8, 1946, edition of The Marietta Daily Journal the following items were reported:

♦Dr. W.H. Perkinson was installed as the new president of the Cobb County Medical Society at a dinner meeting of the group at the Marietta Country Club. He succeeded Dr. L.L. Welch.

♦The body of James R. Taylor, a black man from Acworth, was found on a railroad sidetrack near a boxcar in Acworth. It was believed that Taylor was hit by a north-bound train, which knocked his shoes off his feet and threw his body about 20 feet onto the sidetrack.

Lt. Gen. Lucius Clay of Marietta, who was the deputy military governor of the U.S. Occupation zone in Germany, was reported in the Thursday, Jan. 10, 1946, paper as ordering German minister-presidents to put a stop to the public criticism of the policies affecting the country. Clay’s action followed a disclosure that German socialists were taking advantage of the new-found democratic freedom of speech to denounce the Potsdam Declaration.

In the Monday, Jan. 14, 1946, edition of The Marietta Daily Journal the following items were reported:

♦Three Kentucky youths were arrested in Cobb County and held on suspicion of burglary and larceny of an automobile. Two typewriters, 48 cartons of cigarettes and a handbag half full of nickels, dimes and pennies were found in the car in which the suspects were riding. The items were believed to be loot from a burglary in Muhlenburg, Kentucky, and the car stolen from Logan County, Kentucky.

♦Maj. Roy L. McCamy, recently back from duty in the Pacific, returned to his job as Cobb County’s sanitary engineer. McCamy was to be assisted by Charles Harrison, who filled the position following McCamy’s departure for service in April 1943. During WWII, McCamy was the commanding officer of the 66th Malarial Control Unit. He operated a school for training divisions en route to the southwest Pacific in how to protect themselves against malaria.

James Earl Carter was reported in the Tuesday, Jan. 12, 1971, paper as being inaugurated as Georgia’s 76th governor. Carter immediately issued an appeal to the citizens of Georgia under a gray January sky at the State Capitol to assume responsibility for the quality of government, saying that this was “a time for greatness.”

Carter declared that Georgians “are determined to overcome the handicaps of the past and to meet the opportunities of the future with confidence and with courage.” During other parts of his short inauguration speech, Carter urged an end to illiteracy and racial discrimination, called for protection of natural surroundings, promised support for law enforcement officers and encouraged swift arrest, trial, fair punishment and improved rehabilitation for law breakers.

Also that day, Marietta Police shared some of the horrible details of torture and gang-rape told by a 15-year-old girl who was “sentenced to death” last week by the Marietta-based motorcycle gang “The Prophets.” The girl, who had been living with the gang, escaped the Marietta home while the gang was holding a meeting.

The girl claimed she met the gang in South Carolina where she had been working in a penny arcade. After a few days of living with them, she tore a patch off one of the gang-member’s jackets and according to the gang’s laws was sentenced to death for it. The girl stated that she was then gang-raped, cut with a knife and had darts thrown at her before she managed her escape.