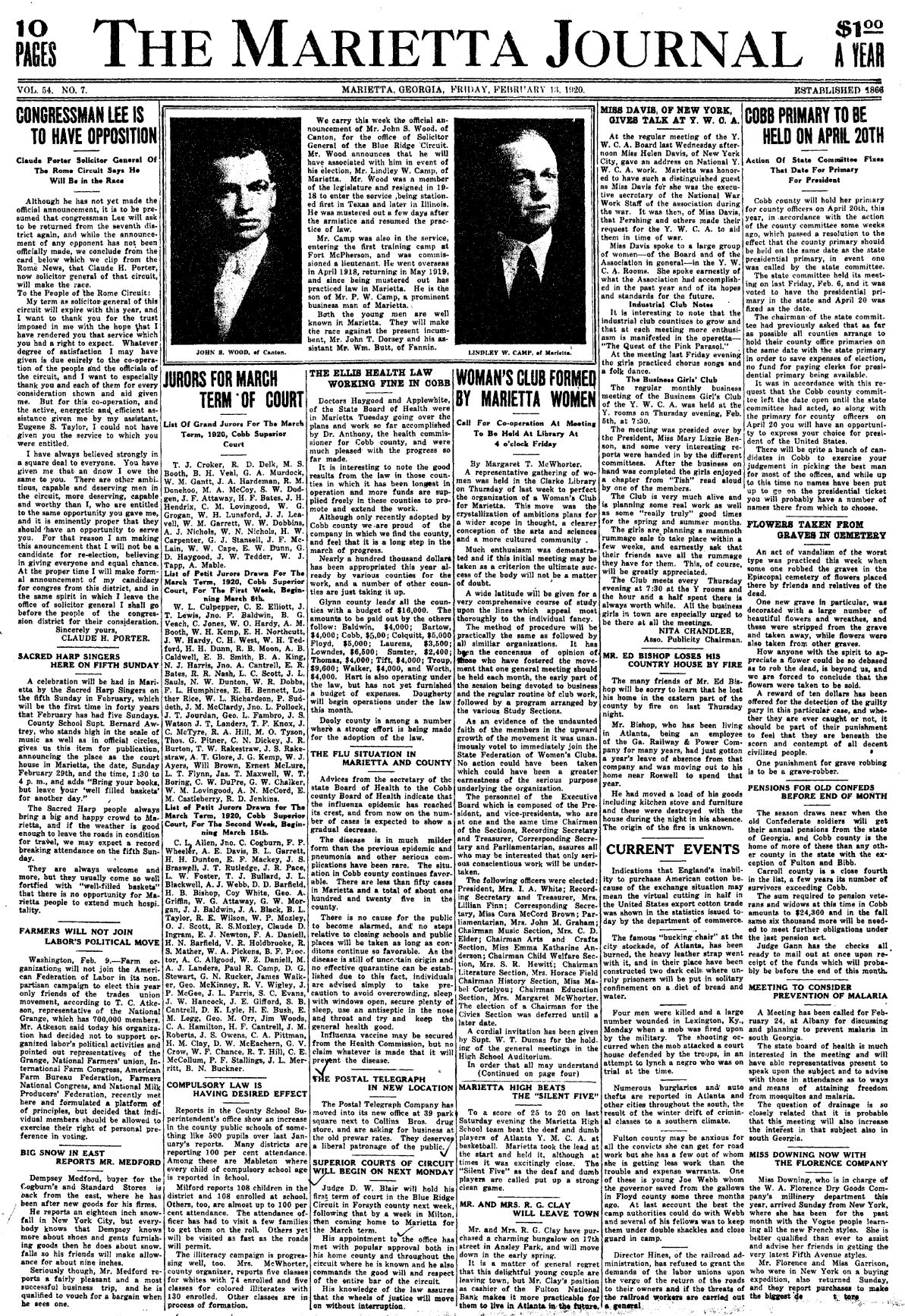 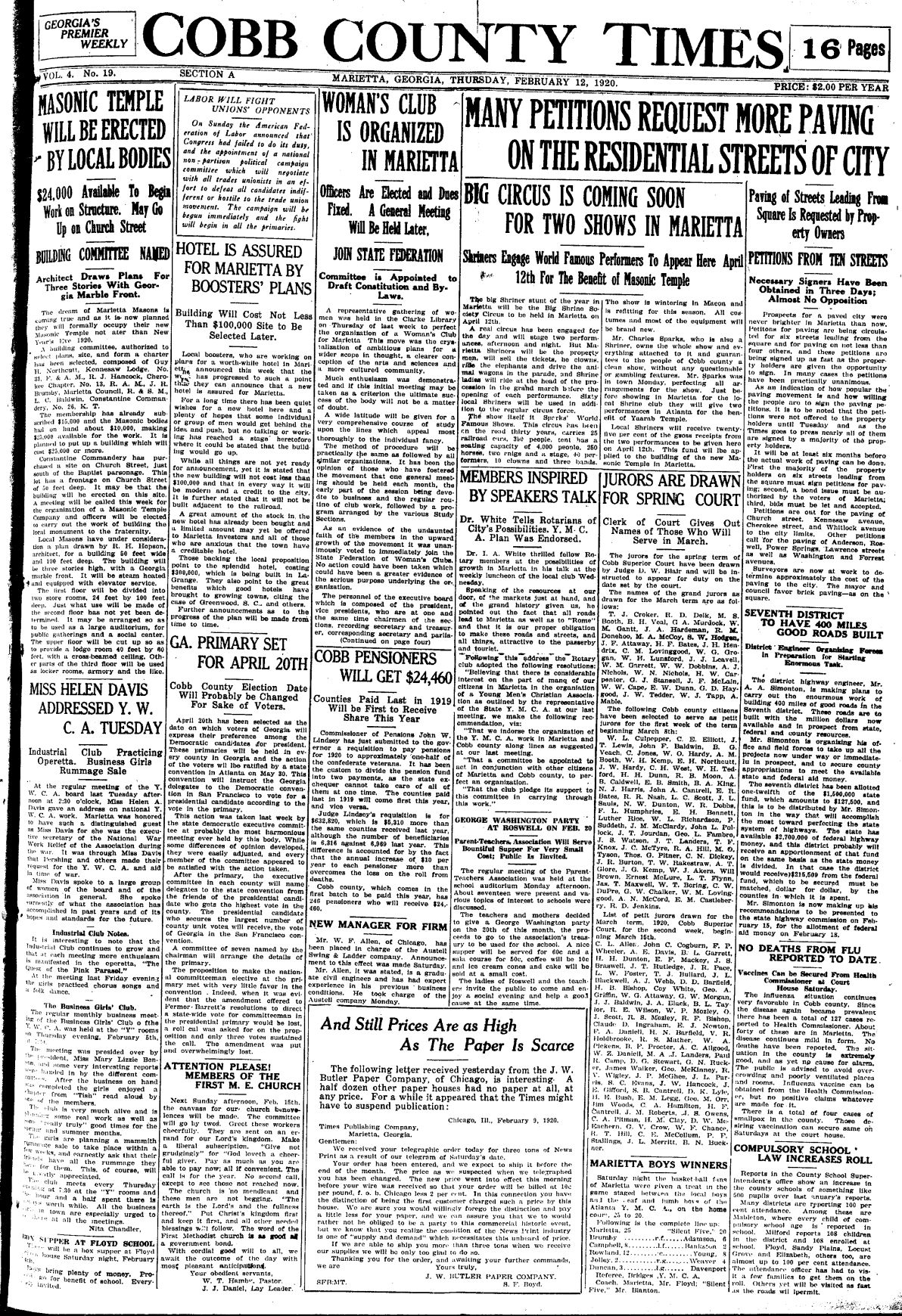 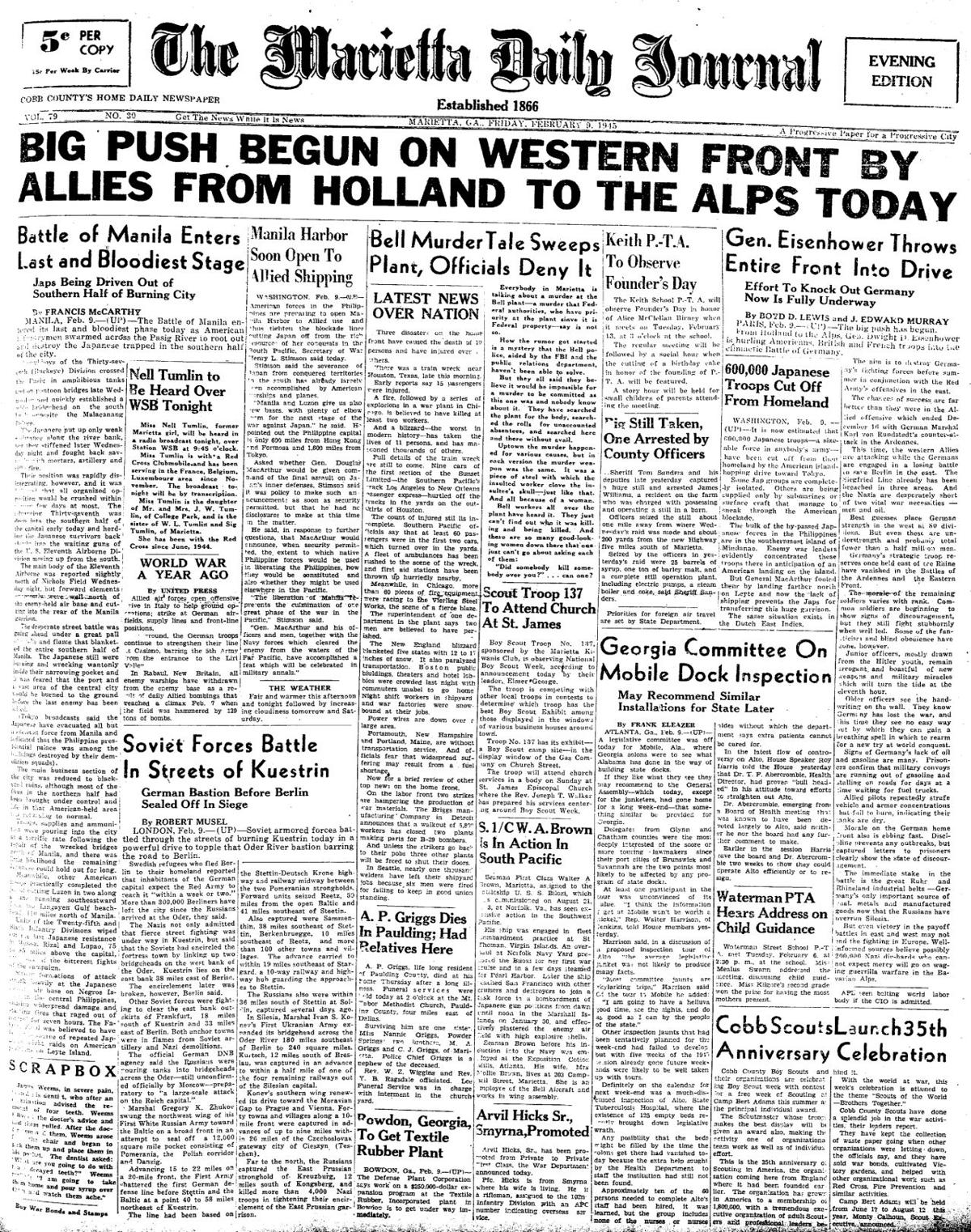 The Thursday, Feb. 12, 1920, edition of The Cobb County Times reported that the Marietta Masons were going to erect a Masonic Temple, possibly on Church Street.

A building committee was named and $24,000 was said to be available to begin work on the structure. Architectural plans showed the building as being three stories with a Georgia marble front.

The Big Shrine Society Circus was also reported as coming to Marietta on April 12, 1920, for two shows that would benefit the building of the Masonic Temple.

Cobb County, which had 246 living Confederate veterans, was reported as receiving $24,460 in pensions to be divided among the men.

An advertisement for the McKinley-Groover Motor Co. announced that the company had opened for business on Atlanta Street and was “the agency for the Briscoe and Kline cars.” For tires, it carried “the Goodrich, Racine, Miller and Pennsylvania” brands. Another advertisement announced that the E.C. Gurley Auto Co., in a new location on Atlanta Street at Delk’s Garage, was the dealer for Chevrolet automobiles and Goodyear tires. They were also selling a “Model No. 490, 5-Passenger Touring Car, fully equipped” for $829.35.

On the Editorial Page, the Times editors printed Dr. Frank Crane’s column, titled “What’s the Matter With America.” Some of the items were:

The Friday, Feb. 13, 1920, edition of The Marietta Journal reported that someone had stolen the flowers placed on several graves in the Episcopal cemetery. A $10 reward was being offered for the grave robber.

In the “Current Events” column on the front page, four men were reported as being killed and a large number wounded in Lexington, Kentucky, the Monday before when a mob was fired upon by the military. The shooting happened when the mob attacked the courthouse that was defended by the troops in an attempt to lynch a black man who was on trial.

In the Wednesday, Feb. 7, 1945, Marietta Daily Journal it was reported that Jean Medford of Marietta received a piece of a parachute and ripcord as the wrapping for a bottle of rare French perfume and powder sent by Staff Sgt. Danforth Jerome Blair, who was with the Army Engineers of the Third Army in Europe.

Also that day, G.L. McIntosh, 20, was reported killed in Belgium on Jan. 12, 1945. A former Bell Bomber Plant employee, he was with the 26th Infantry First Army and was part of the invasion of France.

There were two interesting front page items in the Thursday, Feb. 8, 1945, paper.

The first announced that a 15-year-old Marietta boy was arrested for throwing a quart of ice cream through the $500 motion picture screen at the Cobb Theater and just missing several patrons.

The second reported that “Cobb County’s ghost still has vanished again,” but Sheriff Tom Sanders was holding Herman Logan, a south Cobb farmer, and “confiscated 12 bags of barley meal, a ton of coke, 5,000 gallons of molasses and 50 cases of glass jars.” Officers raided Logan’s farm looking for a mysterious large still that had been producing large quantities of illegal liquor. They found evidence that the still had been there, but it had been moved prior to the raid. The still was reported captured the next day, one-mile away from the farm.

The front page of the Friday, Feb. 9, 1945, paper reported that “everyone in Marietta is talking about a murder at the Bell (Bomber) plant,” but Federal authorities said it wasn’t true.

The rumor claimed that an unidentified someone took a piece of steel and bashed in the head of someone else after they insulted one of the women working at the plant. The Bell police force, aided by the FBI, searched the plant for a body and searched the rolls for unaccounted absentees, but did not find anything.

In the Wednesday, Feb. 11, 1970, paper a Cobb County detective “stumbled onto” evidence that led to a raid the day before that broke up a pornography operation involving kids as models. The raid took place three-quarters of a mile over the Cobb-Bartow County line. Numerous Cobb people were said to be on the mailing list, which was described as having clients all over the world.

Argument between motorists in Eastman ends in gun shots