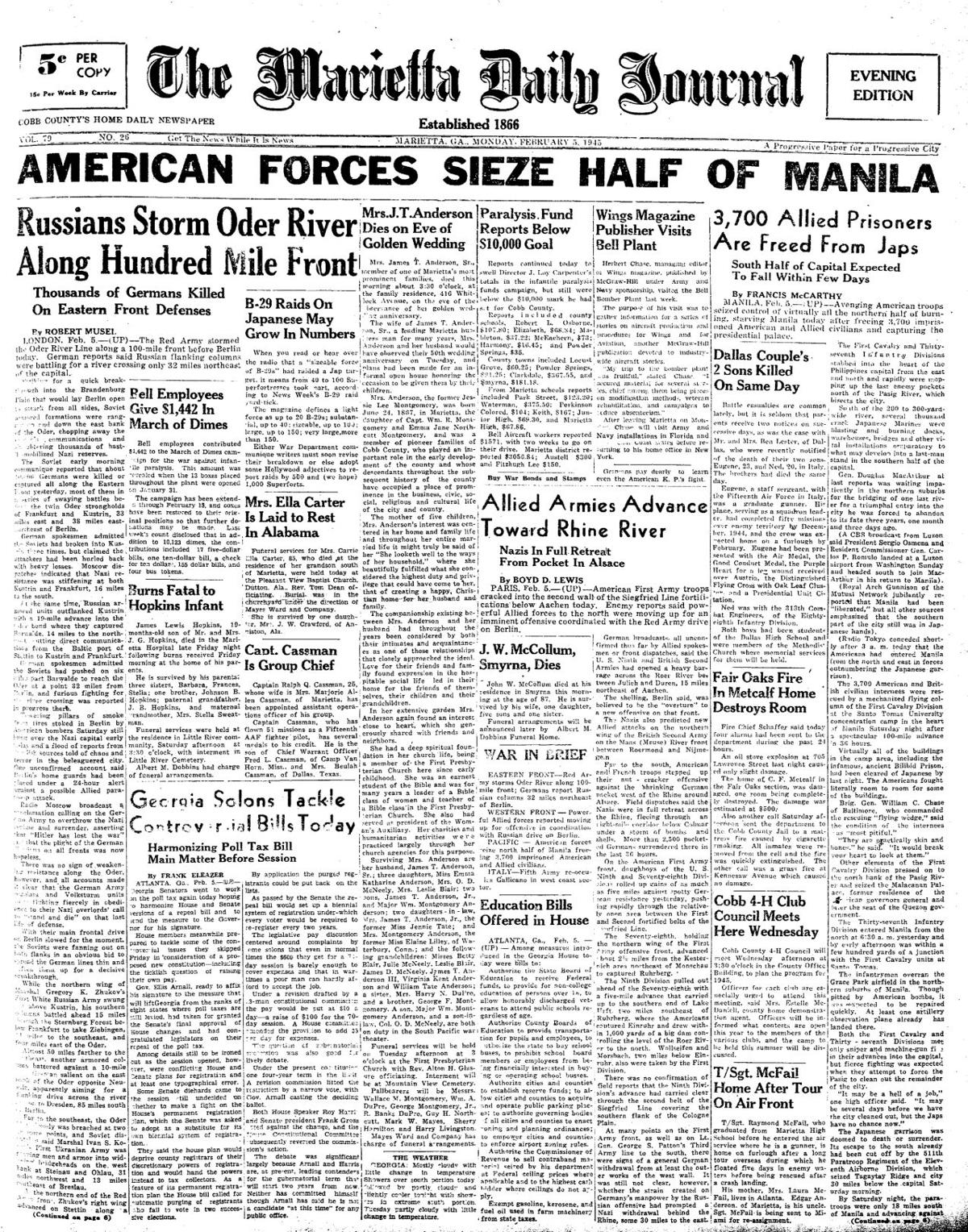 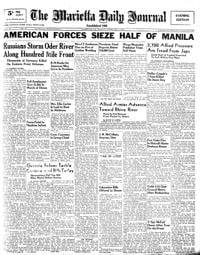 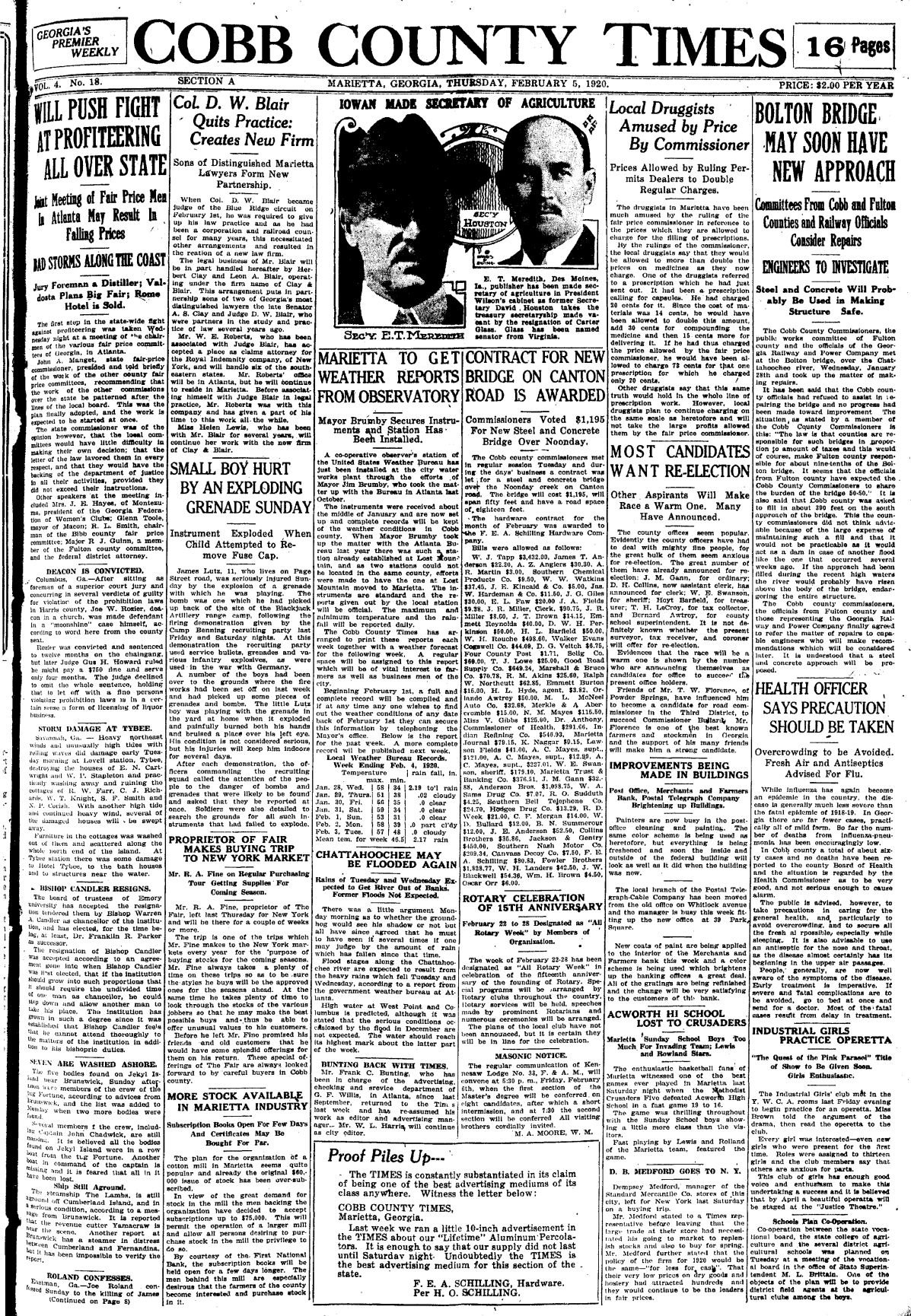 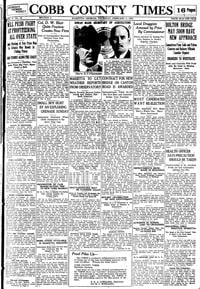 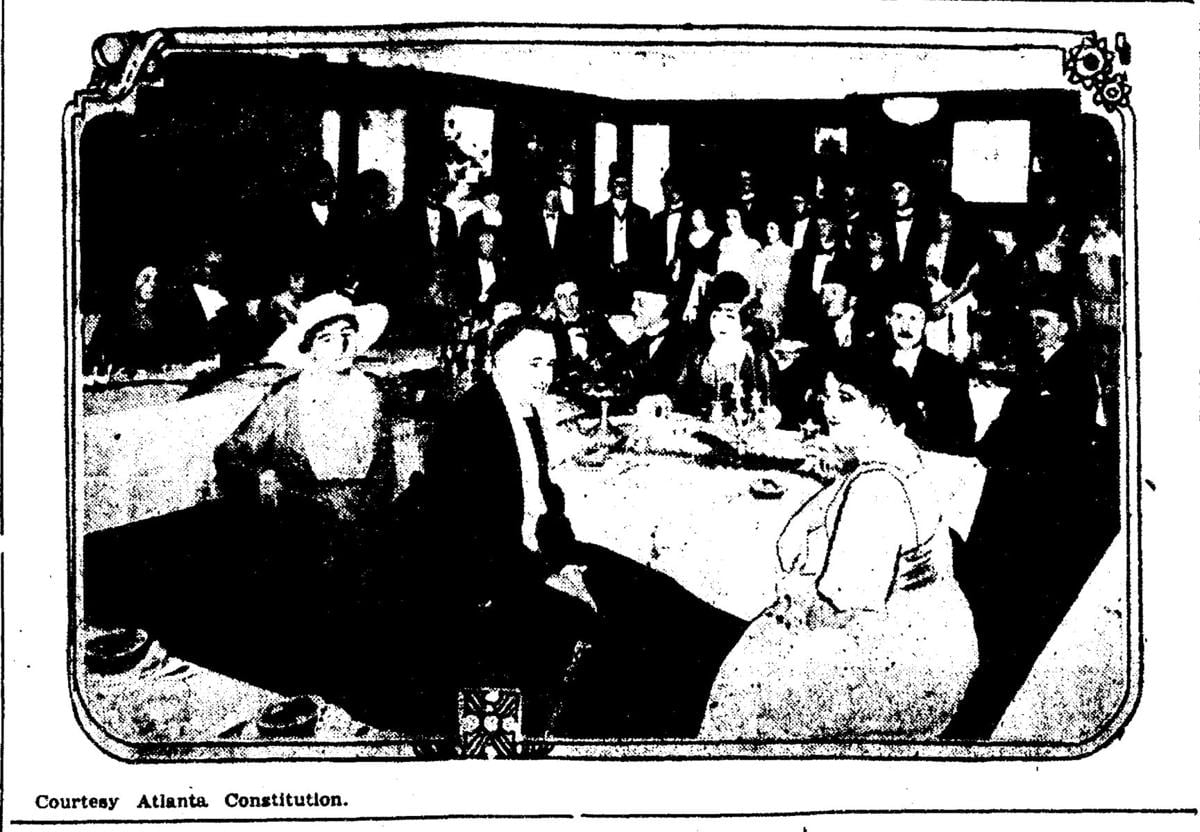 From the Thursday, Feb. 5, 1920, edition of The Cobb County Times. Pictured is a photograph, courtesy of The Atlanta Constitution, showing the Marietta Shrine Club staging an elaborate dinner at the Marietta Golf Club the week before for newly elected officials of the Yaraab Temple. Potentate Henry C. Heinz, Mrs. Heinz and other nobles and their wives from Atlanta were guests of honor. 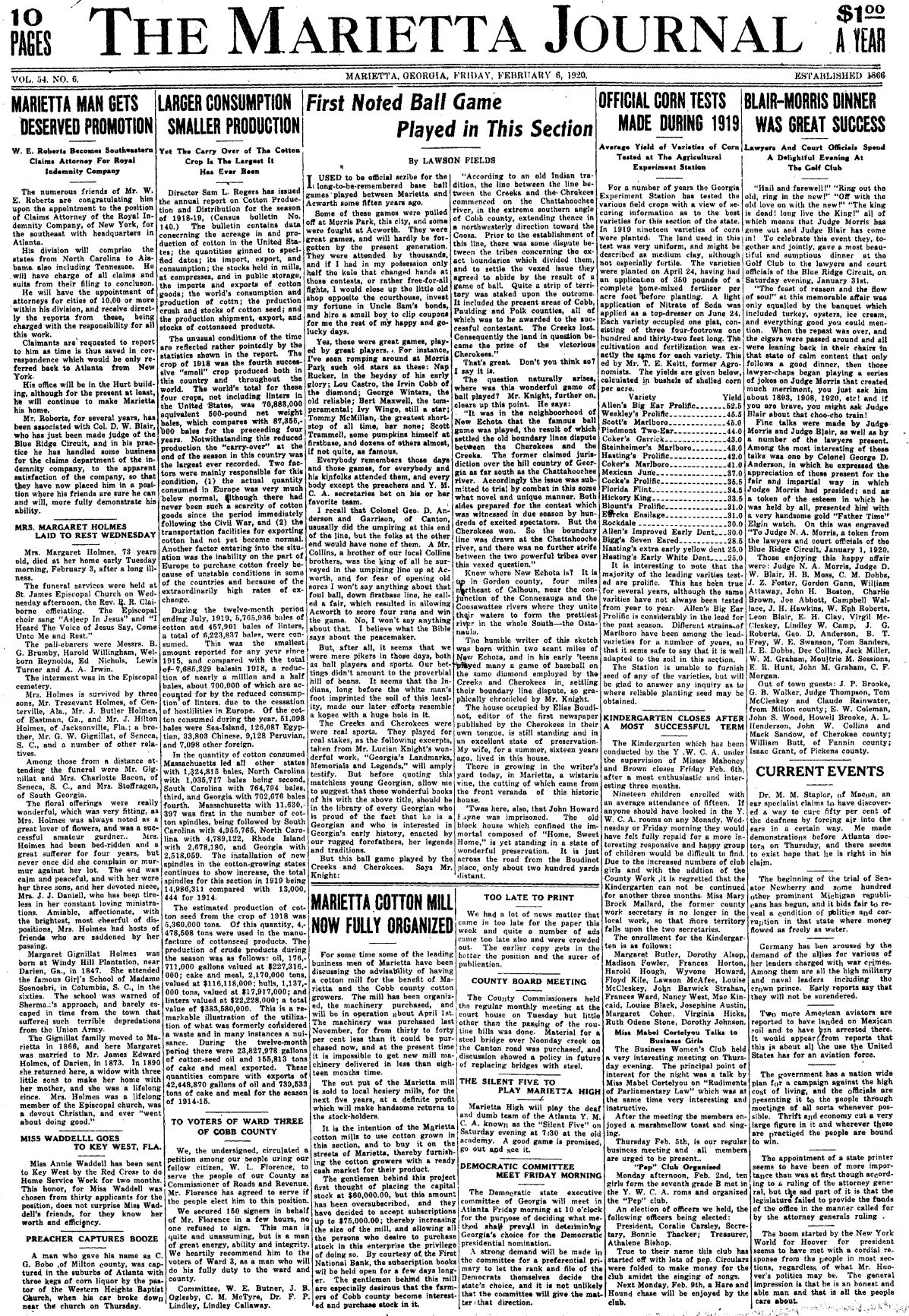 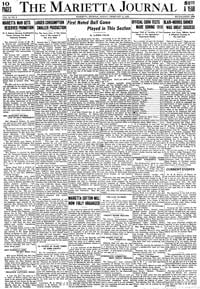 From the Thursday, Feb. 5, 1920, edition of The Cobb County Times. Pictured is a photograph, courtesy of The Atlanta Constitution, showing the Marietta Shrine Club staging an elaborate dinner at the Marietta Golf Club the week before for newly elected officials of the Yaraab Temple. Potentate Henry C. Heinz, Mrs. Heinz and other nobles and their wives from Atlanta were guests of honor.

The Thursday, Feb. 5, 1920, edition of The Cobb County Times reported that James Lutz, 11, of Page Street in Marietta, was seriously hurt the Sunday before when the grenade that he was playing with exploded in his hands.

Lutz found the grenade at the site of the Blackjack Artillery range camp after the firing demonstrations of World War I ordinance by the Camp Benning recruiting party, which had been in town the week before. The boy was in the yard at his home when the explosion occurred. He was listed as having "painfully burned both of his hands and bruised a place over his left eye."

In addition to Lutz, several other boys were said to have been out to the range and had picked up pieces of grenades and bombs. Soldiers were dispatched to sweep the range and collect any other unexploded ordinance.

A co-operative observer's station of the U.S. Weather Bureau was reported as being installed at Marietta's water works plant through the efforts of Mayor Jim Brumby. The Times also arranged to print the weather reports each week with a weather forecast for the following week.

John Rayburn, a bailiff of Carroll County, was reported as being arrested the Monday before by U.S. Deputy Marshal C.G. Barber of Newnan with violation of the liquor laws. According to reports at the marshal's office in Atlanta, a still was found in operation at the rear of Rayburn's home.

In the “News From Our Correspondents” column were two interesting Roswell items:

♦ The first reported that A. Motz was elected mayor for the coming year. The councilmen were W.Y. Smith, Ernest Coker, Mr. Medley, J.G. Adams, H.L. Weaver and H.M. Broadwell.

♦ The second item reported that an ice plant, owned and operated by Mr. Conway, was to be erected in the city.

The Friday, Feb. 6, 1920, edition of The Marietta Journal reported in the "Current Events" column on the front page that Dr. M.M. Stapler of Macon, an ear specialist, claimed to have discovered a 50% chance cure for deafness by forcing air into the ears in a certain way. Dr. Stapler demonstrated the technique in Atlanta the day before.

On the Editorial Page, the Journal editors wrote about how Prohibition officers arrested a Chicago banker, who had a pint of whiskey in his trousers pocket, and wanted to confiscate the trousers as the "vehicle" that transported the contraband. The editors said, "We'll bet the banker had rather give up the pants than the pint."

In the Thursday, Feb. 7, 1945, Marietta Daily Journal it was reported that Cobb merchants received paper-saving pledge cards to display in their windows. Under the pledge, a merchant would not wrap anything in paper that could be safely carried without a wrapping.

Mrs. James T. Anderson Sr. was reported in the Monday, Feb. 5, 1945, paper as having died that morning on the eve of her golden wedding anniversary.

Mrs. Anderson, formerly Jessie Lee Montgomery, was the daughter of Capt. Wm. R. Montgomery and Emma Jane Northcutt Montgomery. She was a member of the pioneer families of Cobb County that played an important role in the early development of the county.

Also that week, the deaths of three service members were reported in the fighting of WWII.

The wife of Pvt. Marion W. Taylor, 30, of Smyrna was reported in the Friday, Feb. 2, 1945, paper as being advised by the War Department that her husband was killed in action in Belgium on Jan. 6, 1945. Taylor was a member of the Parachute Infantry.