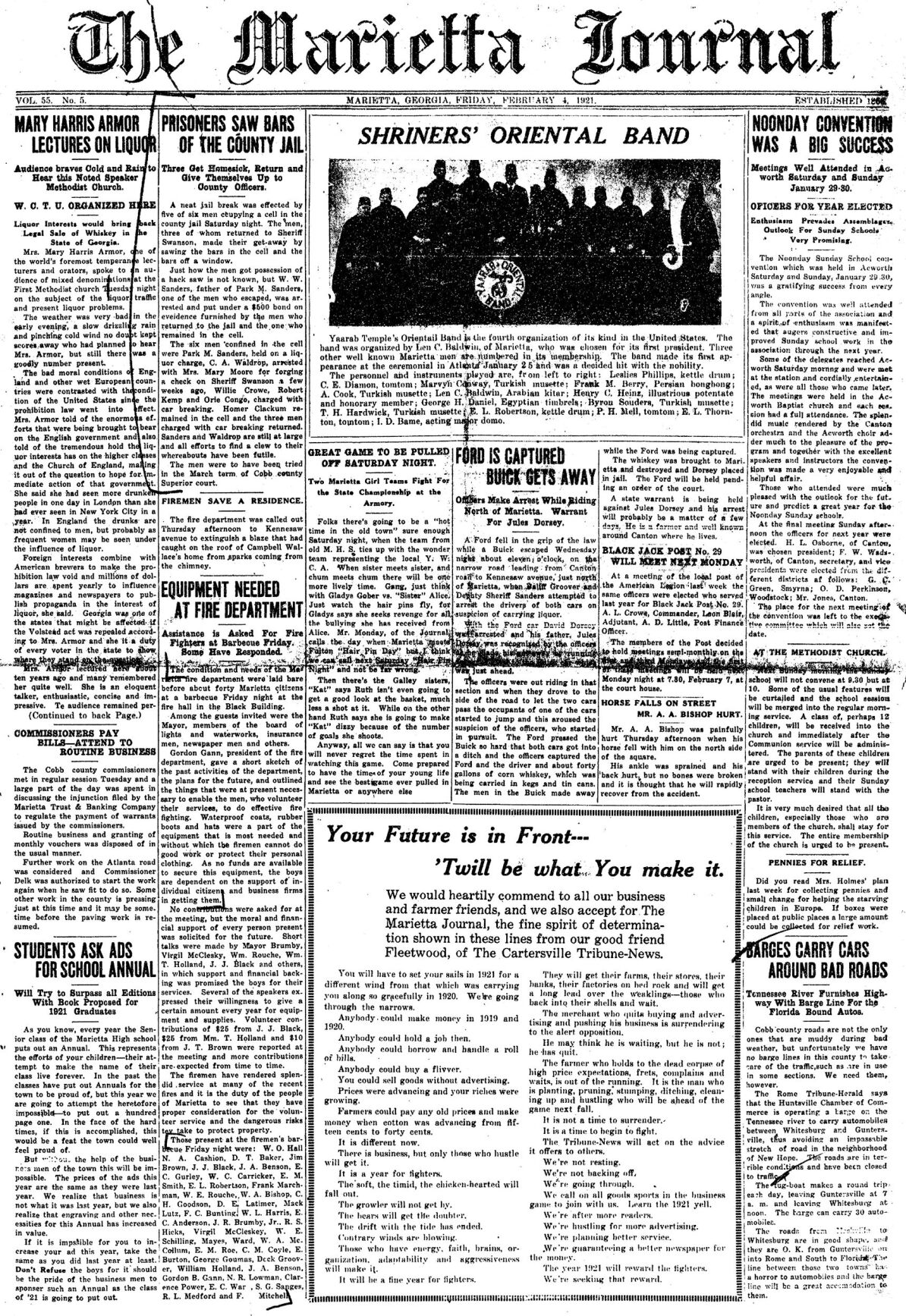 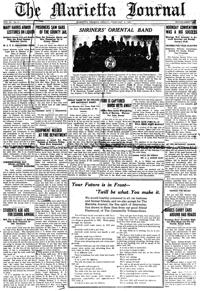 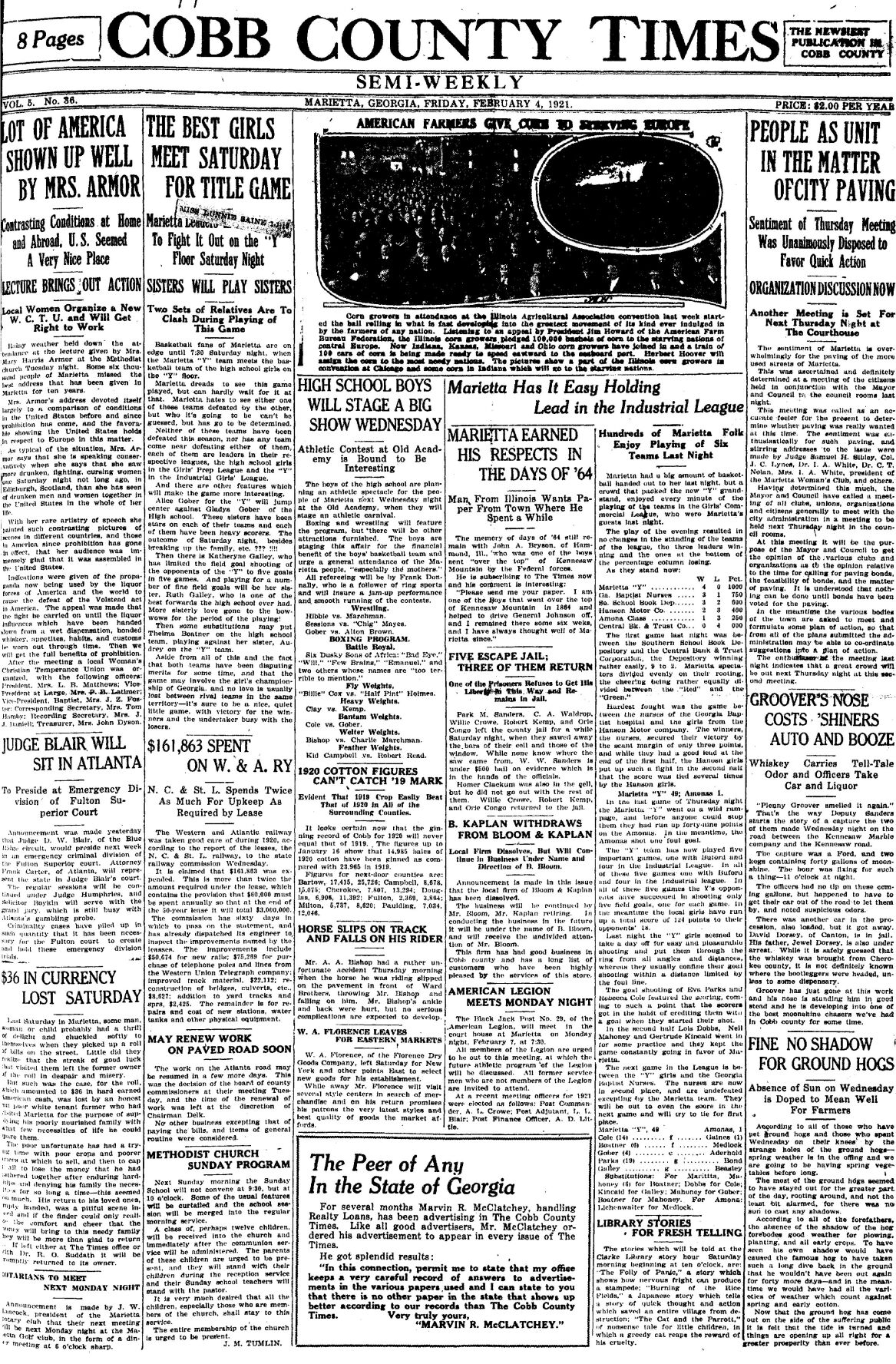 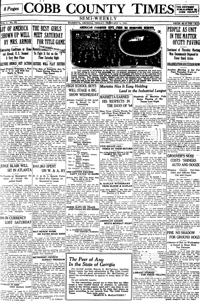 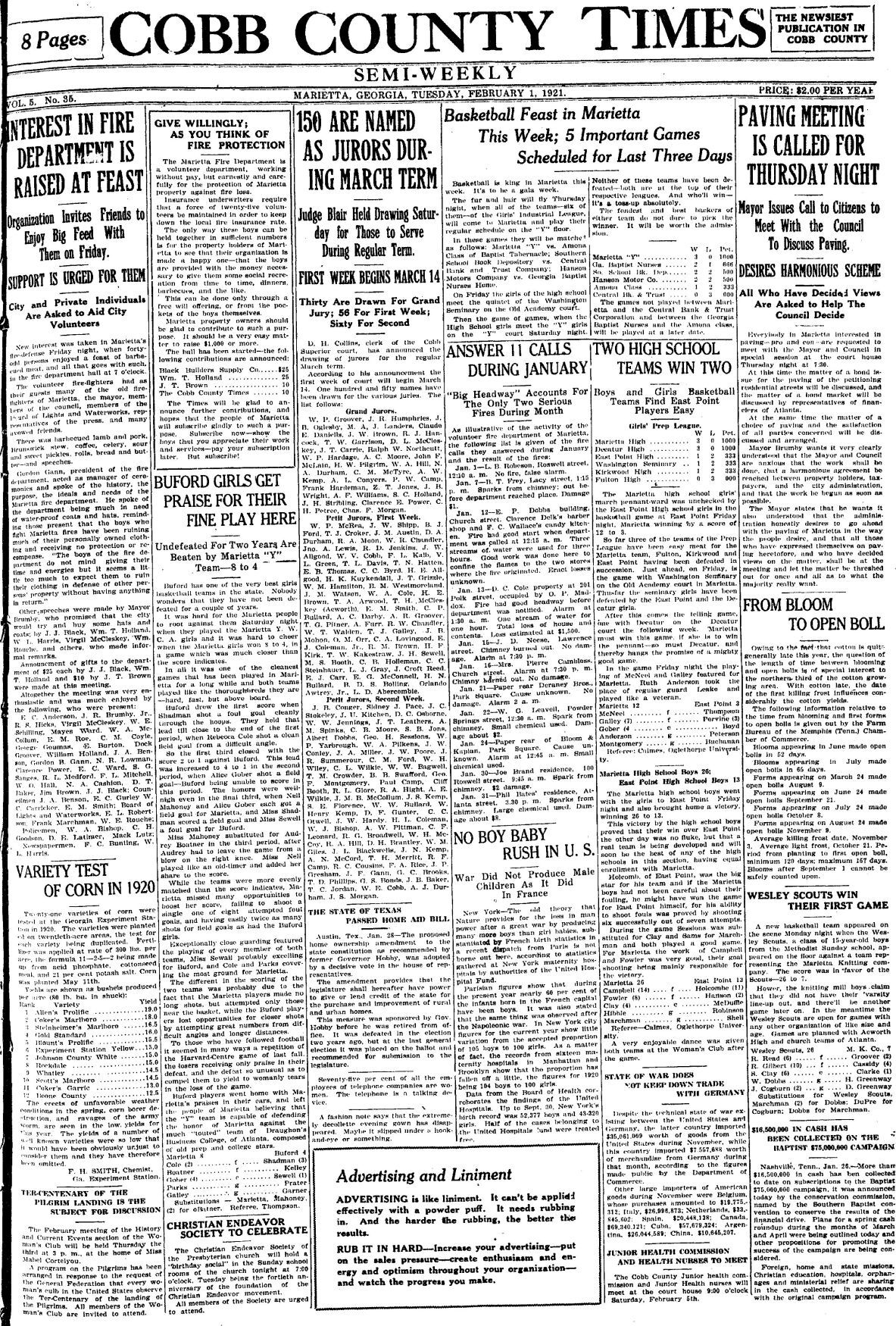 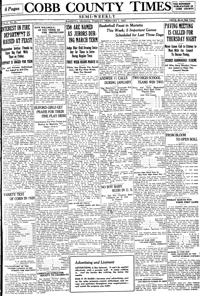 The Friday, Feb. 4, 1921, edition of The Cobb County Times reported that Park M. Sanders. C.A. Waldrop, Willie Crowe, Robert Kemp and Orle Congo escaped the county jail the Saturday night before when they sawed away the bars of their cell and those of a window. The source of the saw was unknown. A sixth man, Homer Clackum, was also in the cell but did not leave the jail. Later that night Crowe, Kemp and Congo were captured and returned to the jail.

A.A. Bishop had an unfortunate accident the Thursday morning before when his horse slipped on the pavement in front of Ward Brothers. The horse threw its rider and then fell on him, causing Bishop some non-serious injuries.

Two moonshiners in a Ford with two kegs containing 40 gallons of moonshine were reported as being captured the Wednesday night before on the road between the Kennesaw Marble Company and Kennesaw Road. The officers were tipped off by the suspicious smell of the other car as they got out of the road to allow it to pass through. A second car in the procession, similarly loaded, managed to get away.

The Friday, Feb. 4, 1921, edition of The Marietta Journal reported that despite bad weather, Mary Harris Armor, one of the world’s foremost temperance lecturers and orators, spoke to an audience of mixed denominations at the First Methodist Church in Marietta the Tuesday before on the subject of liquor traffic.

In the Friday, Feb. 1, 1946, edition of The Marietta Daily Journal the following items were reported:

♦Marietta Mayor L.M. Blair’s condition was described by his wife as “very satisfactory.” Blair had been taken to Piedmont Hospital the Tuesday before when he thought he was a having a heart attack. Doctors instead diagnosed him as having spontaneous pneumothorax.

♦Final rites were held for Hubert J. Booth, 36, a former Marietta native, the Tuesday before. A brakeman for the Seaboard Air Line Company, Booth was killed when he was crushed between a freight car and a platform.

Two Cobb County men were reported in the Monday, Feb. 4, 1921, paper as being fined $1,000 each by Judge Hawkins on charges of owning apparatus for manufacturing illegal whiskey. The men were arrested on Jan. 22, 1921, by Sheriff T.M. Sanders as the result of a raid on a huge steam type still on Cooper Lake Road in the southwestern part of the county. Sanders found twenty 500-gallon barrels, a number of smaller barrels, 200 pounds of malt, and an electrically operated water pump that pulled water up from a spring to the still.

The Monday, Feb. 1, 1971, paper reported that David Henry Gambrell, 41, an Atlanta attorney and chairman of the state Democratic Party, was selected by Gov. Jimmy Carter to fill the Senate seat left vacant by Sen. Richard B. Russell’s death 11 days earlier.

Former Gov. Ernest Vandiver announced in the Tuesday, Feb. 2, 1971, paper that he intended to run for the Senate seat that Gov. Carter appointed David Gambrell to the day before.