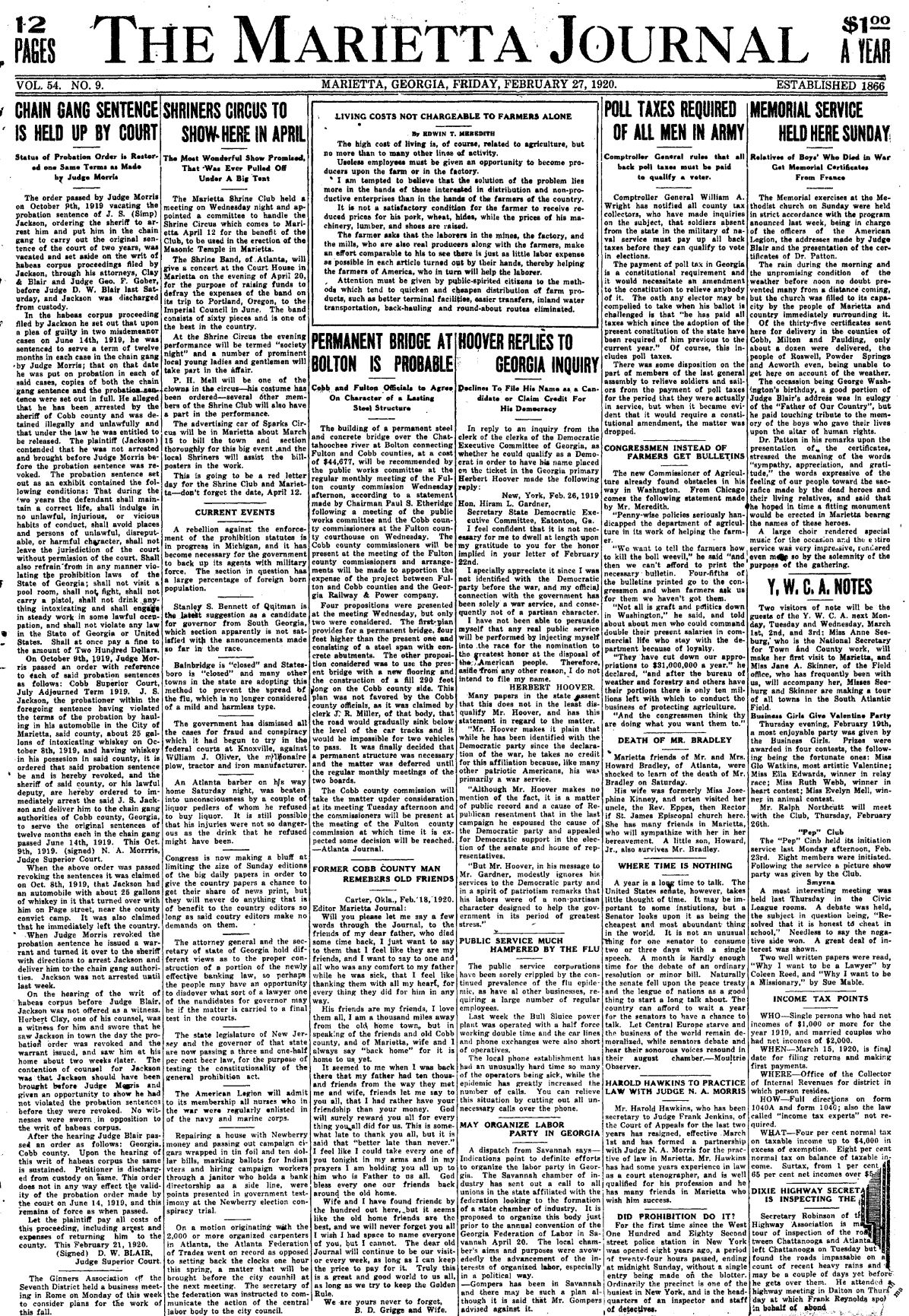 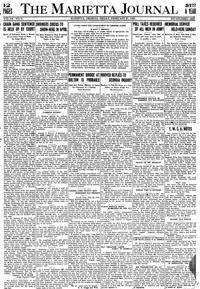 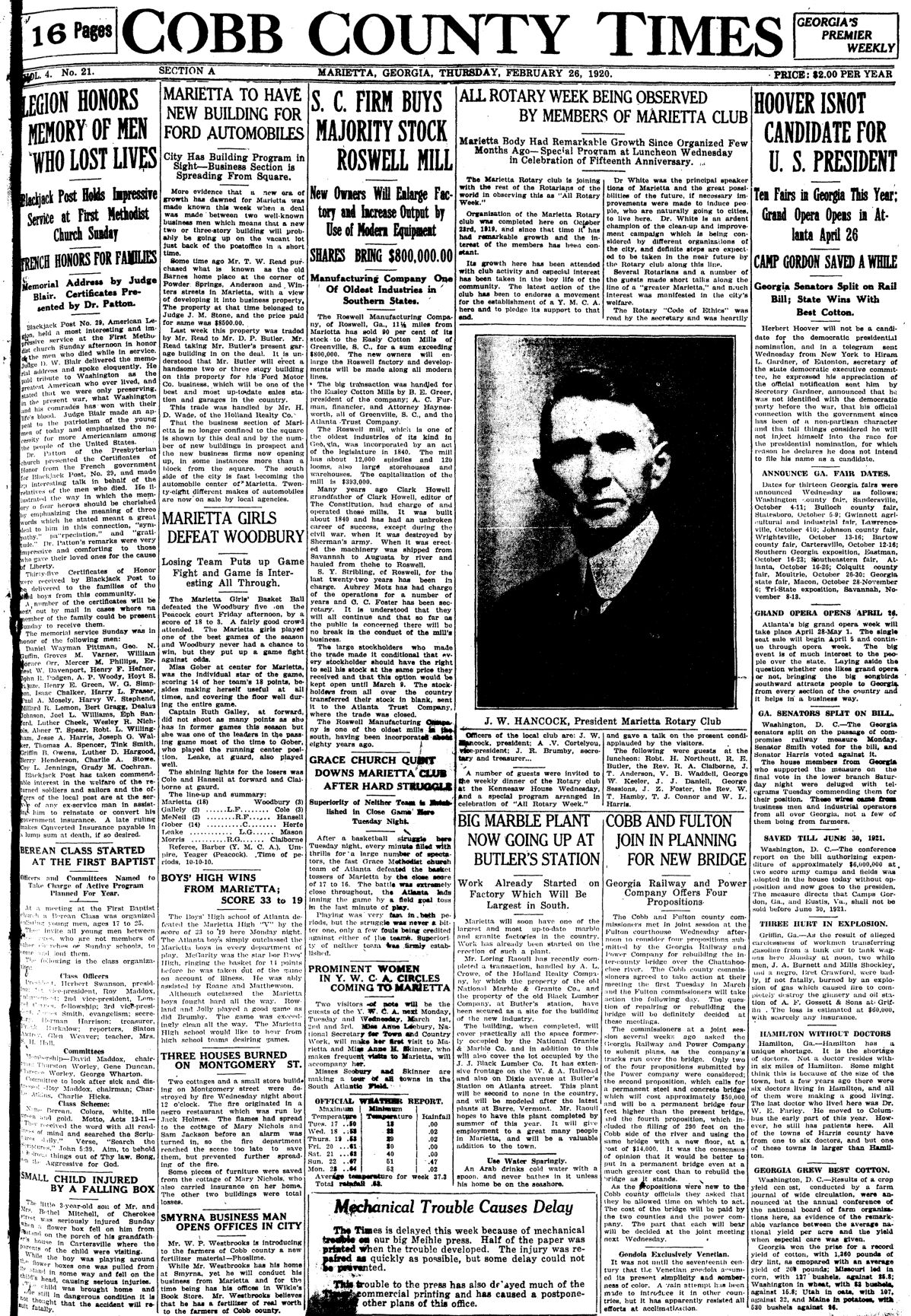 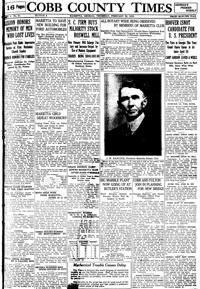 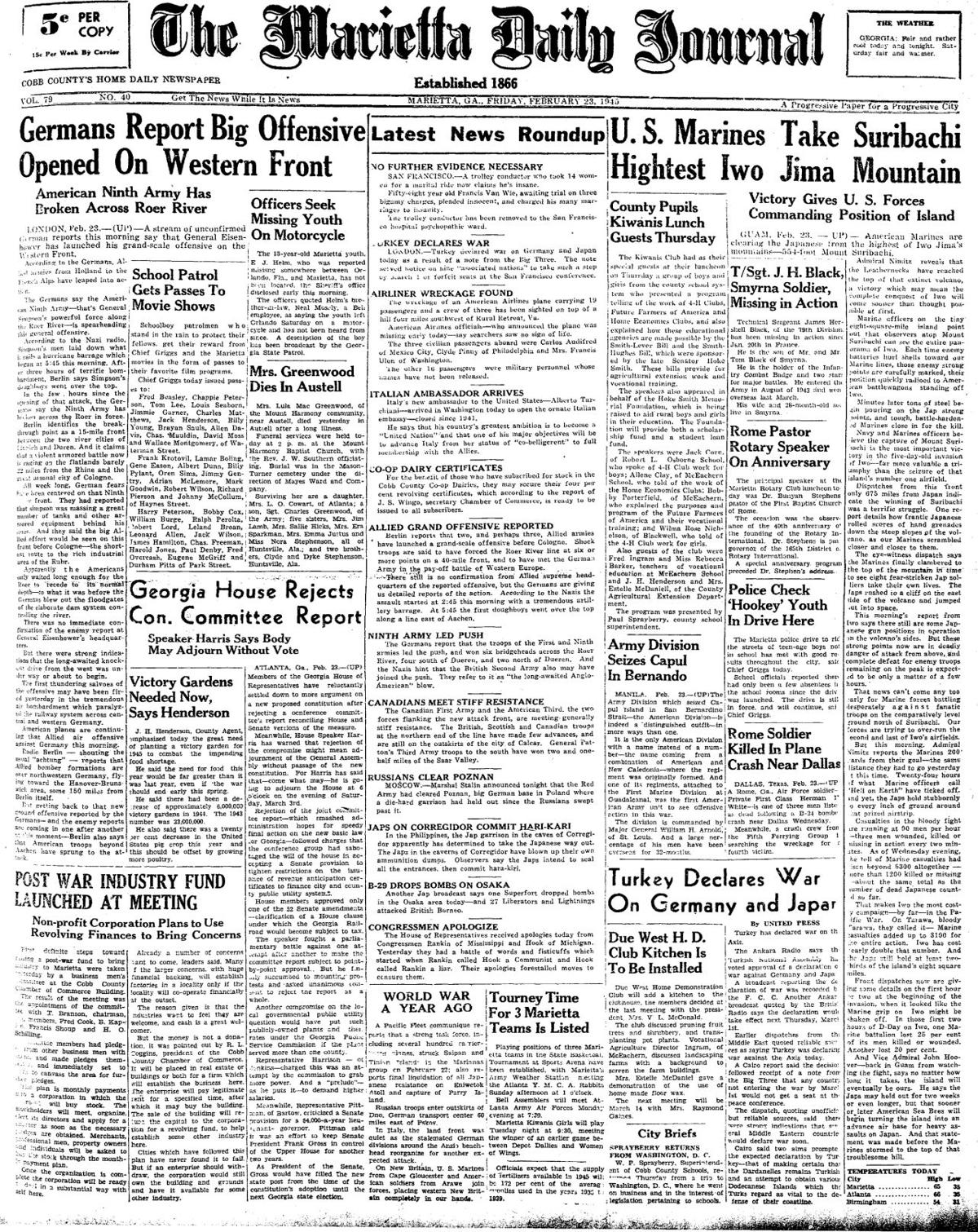 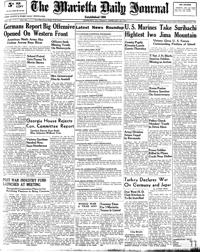 The front page of the Marietta Daily Journal from Thursday, March 1, 1945.

The front page of the Marietta Daily Journal from Thursday, March 1, 1945.

100 years ago …The Thursday, Feb. 26, 1920, edition of The Cobb County Times reported that the Roswell Manufacturing Company of Roswell, 11 1/2 miles from Marietta, sold 90% of its stock to the Easly Cotton Mills of Greenville, South Carolina, for over $800,000. The new owners were expected to enlarge and modernize the factory.

The old National Marble & Granite Co. and the property of the old J.J. Black Lumber Company, with extensive frontage on the Western & Atlantic Railroad and Dixie Avenue at Butler’s Station, were reported as having been bought by Loring Raoult for “one of the largest and most up-to-date marble and granite factories in the country.” The plant was to be modeled after “the latest plants at Barre, Vermont,” and “be second to none in the country.”

Two cottages and a small storage building on Montgomery Street in Marietta were reported as being destroyed by fire the Wednesday before. The fire originated in a black restaurant run by Jack Holmes. The flames then spread to the cottage of Mary Nichols and Sam Jackson before an alarm was sounded.

The three-year-old son of Bethel Mitchell of Cherokee County was reported as being seriously injured when a flower box fell off the porch and struck him at his grandfather’s house in Cartersville the Sunday before. At the time of publication, it was believed the boy’s injuries would eventually be fatal.

On Page 6, the Times also reported on “Cobb County’s Only War Bride.” Jesse Barswell was a young, well-known farmer near Powder Springs, who served with the American Expeditionary forces in Paris during World War I. While overseas, he met his 17-year-old bride, Mile Suzanne Palk of Nuelly, France, who had been serving her country as a munition worker from the start of the war with Germany. After a few months of courtship, they were married on Aug. 30, 1919.

“John Pomeroy, the noted New Zealand scientist and explorer,” was reported as having visited Atlanta and drew a large crowd the week before to Jacob’s Pharmacy, where participants learned more about “his famous medicine Puratone.”

The Friday, Feb. 27, 1920, edition of The Marietta Journal reported in the Mableton section of the “News From Our Correspondents” column that V.R. Holbrook and his wife went to Atlanta for about four hours one day the week before and returned to find their house full of smoke and a bed on fire. The only damage was the loss of three or four quilts, a pair of blankets and a burned part of the mattress.

75 years ago ...In the Friday, Feb. 23, 1945, Marietta Daily Journal it was reported that Technical Sgt. James Hershell Black of Smyrna, serving with the 79th Division, had been missing in action since Jan. 20, 1945, in France.

A Boy Scout paper pick-up drive, headed by Henry Kemp, was reported in the Tuesday, Feb. 27, 1945, paper as having salvaged 1,600 pounds of paper the Saturday before.

Lt. J.H. McCollum was reported in the Wednesday, Feb. 28, 1945, paper as having been killed in a plane crash in India. McCollum’s mother held out hope that he would return to base. McCollum, “a first-rate pilot,” had crashed once before in India and it took a week for him to return to his base with the help of “friendly natives.”

Also that day, Marietta’s crime detection department was reported as installing a modern photographic laboratory. Leo Blackwell, who made fingerprinting and photography his specialty at the FBI school, would operate the lab.