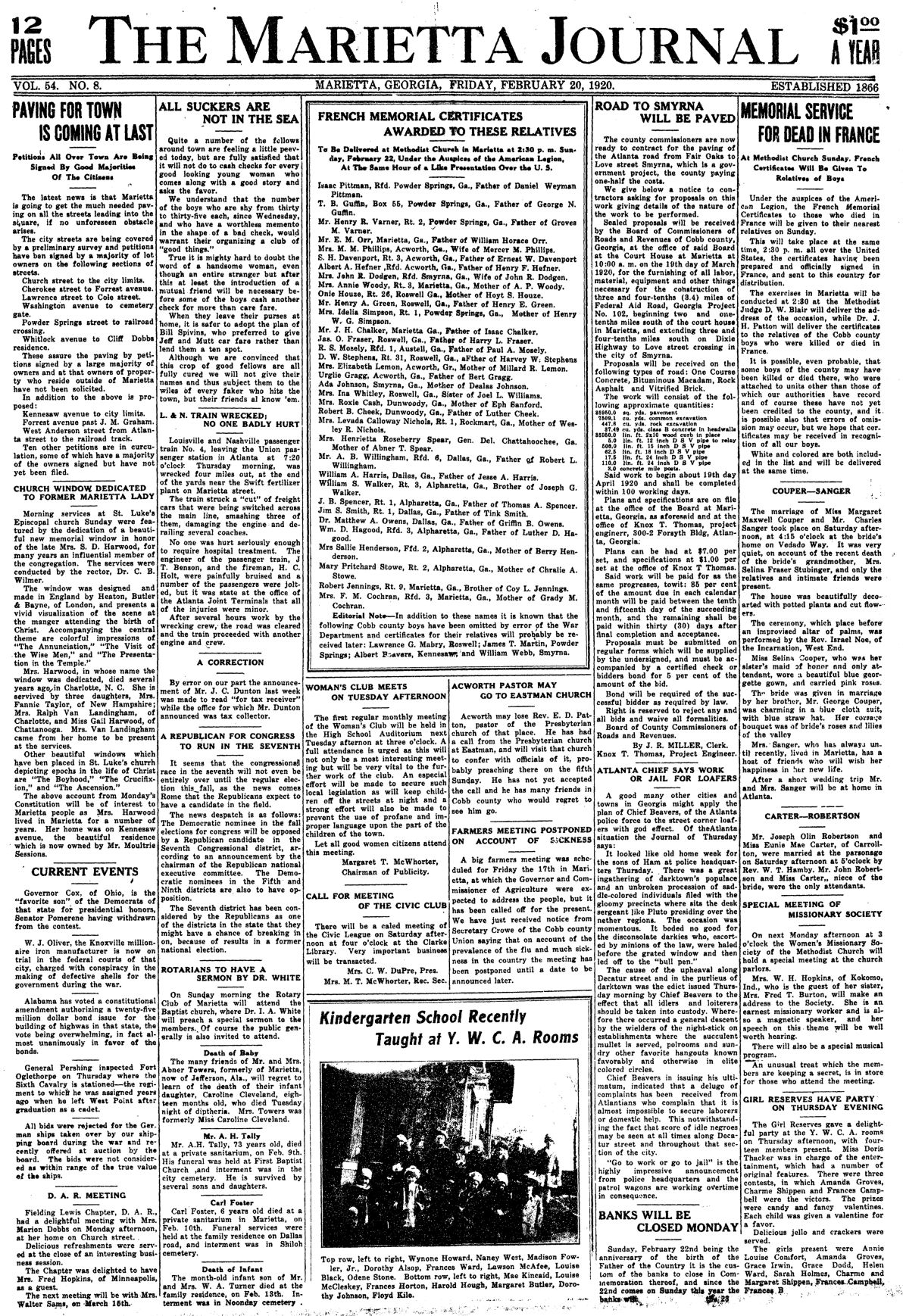 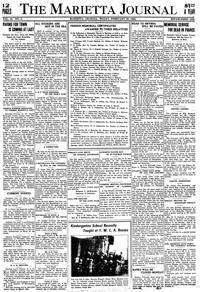 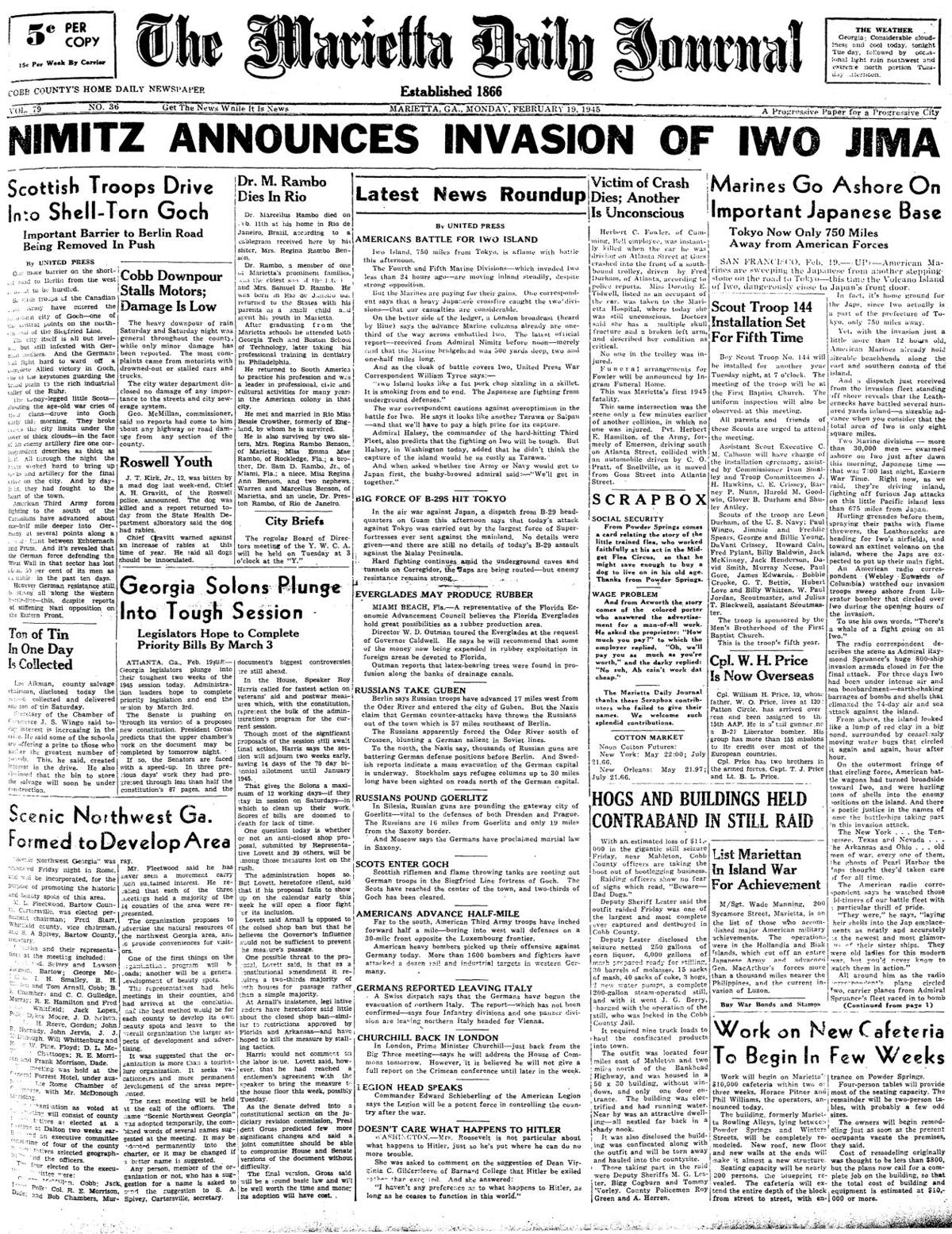 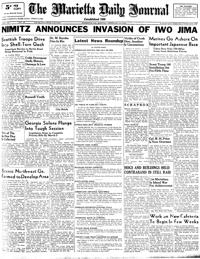 The Thursday, Feb. 19, 1920, edition of The Cobb County Times reported that the Blackjack Post, No. 29 of the American Legion was to give the first tribute to Cobb County’s WWI dead soldiers the following Sunday at the Methodist Church in Marietta. Judge D.W. Blair of the Superior Court of the Blue Ridge Circuit was to deliver the memorial address and Dr. J.H. Patton was to present the Certificates of Honor from the French government to the men’s next of kin.

Hundreds of young men were reported as taking advantage of the vocational school established at Camp Gordon for training young men in various trades. The camp was allotted $40,000 of the $2 million appropriated by the War Department for conducting the schools. A recent count showed that 12,000 young men had already enrolled in the schools.

The Marietta Fire Department had a busy week with three calls.

The third, occurring the Sunday before, was at Lake Street where Rena Rudisel, 50, a black woman, was fatally burned after her clothes caught on fire. “An invalid from paralysis for several years,” Rudisel was alone in a room and her screams were not heard until “her clothing was practically burned from her body” and she suffered severe burns in several places.

The Friday, Feb. 20, 1920, edition of The Marietta Journal reported the Louisville and Nashville passenger train No. 4, leaving the Union passenger station in Atlanta, was reported as having wrecked four miles out at the end of the yards near the Swift fertilizer plant on Marietta Street. The train struck some freight cars that were being switched across the main line and smashed three of them, damaging the engine and derailing several coaches. No one was seriously injured.

Several men around Marietta were reported as having been suckered by a pretty young woman with a good story and asking them for a favor the Wednesday before. Each of the men were out $30-$35 after they gave the woman cash in exchange for what turned out to be a bad check.

Services at St. Luke’s Episcopal Church the Sunday before were reported as featuring the dedication of “a beautiful new memorial window in honor of the late Mrs. S.D. Harwood” for her years as an influential member of the congregation. The window was designed and made in England by Heston, Butler & Bayne of London and presented “a vivid visualization” of the manger scene at Christ’s birth.

In the “Current Events” column, it was reported that W.J. Oliver, a millionaire iron manufacturer, was on trial in Knoxville’s federal court for “conspiracy in the making of defective shells for the government” during WWI.

In the “News From Our Correspondents” column, the Olive Springs correspondent wrote that James, the son of H.L. Martin, had swallowed a “tobacco tag while playing,” but was doing fine at the time of the report.

James V. Carmichael, general manager of the Georgia Division Bell Aircraft Corporation, was reported in the Friday, Feb. 16, 1945, Marietta Daily Journal as having bought “Ivy Grove” — the Morgan McNeel home on Cherokee Street. Ivy Grove was “one of the most handsome residences in the state” and known for its extensive gardens.

In the Monday, Feb. 19, 1945, paper it was reported that with an estimated $11,000 loss in a gigantic still seizure near Mableton the Friday before, Cobb County officers were “taking the boot out of (the) bootlegging business.” Deputy Sheriff Lester said the outfit raided that day was “one of the largest and most complete ever captured and destroyed” in Cobb. The raid netted 250 gallons of corn liquor, 6,000 gallons of mash prepared for stilling, 30 barrels of molasses, 15 sacks of mash, 40 sacks of coke, 3 hogs, two new water pumps and a complete 200-gallon steam-powered still. It required nine truckloads to haul the confiscated products into town.