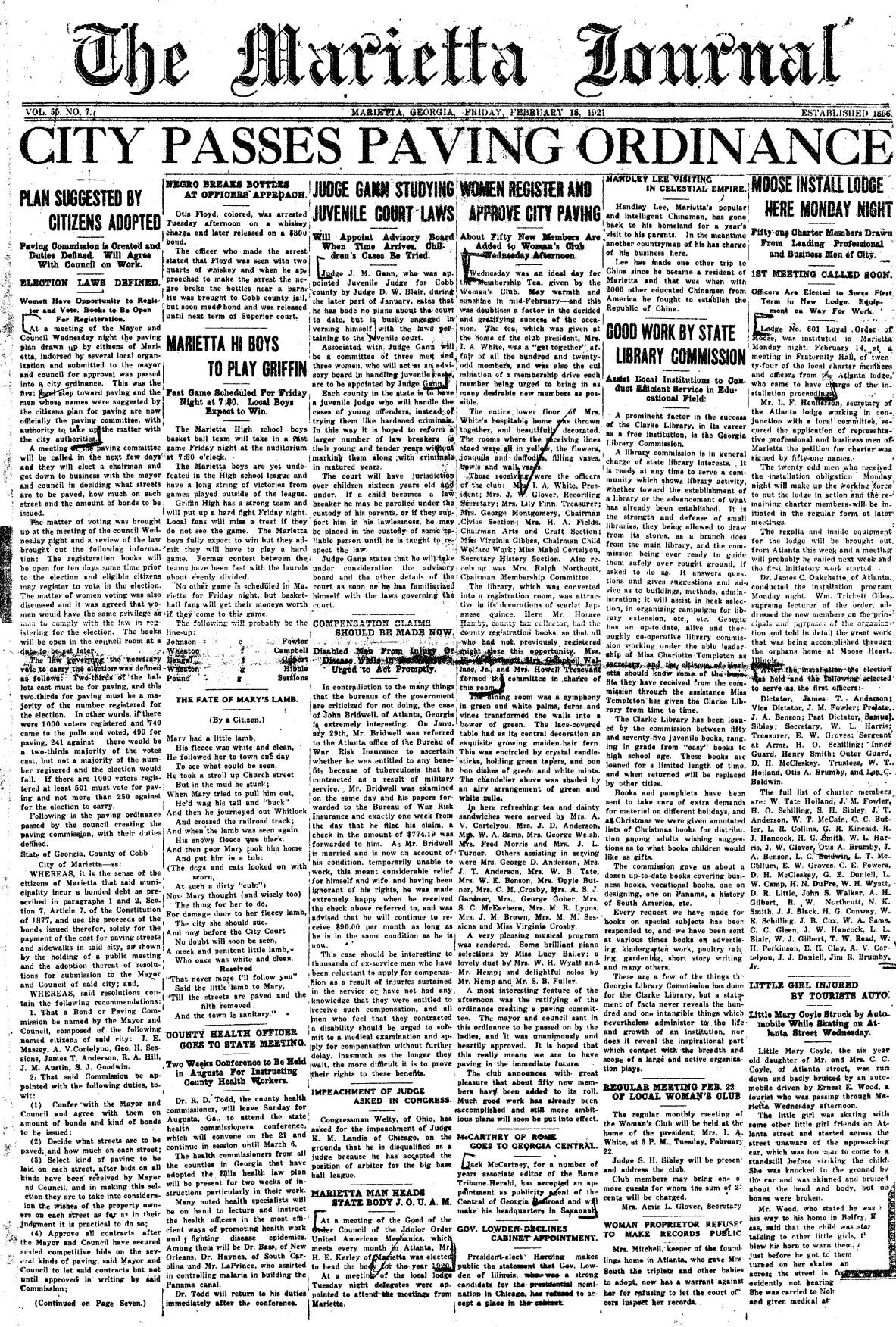 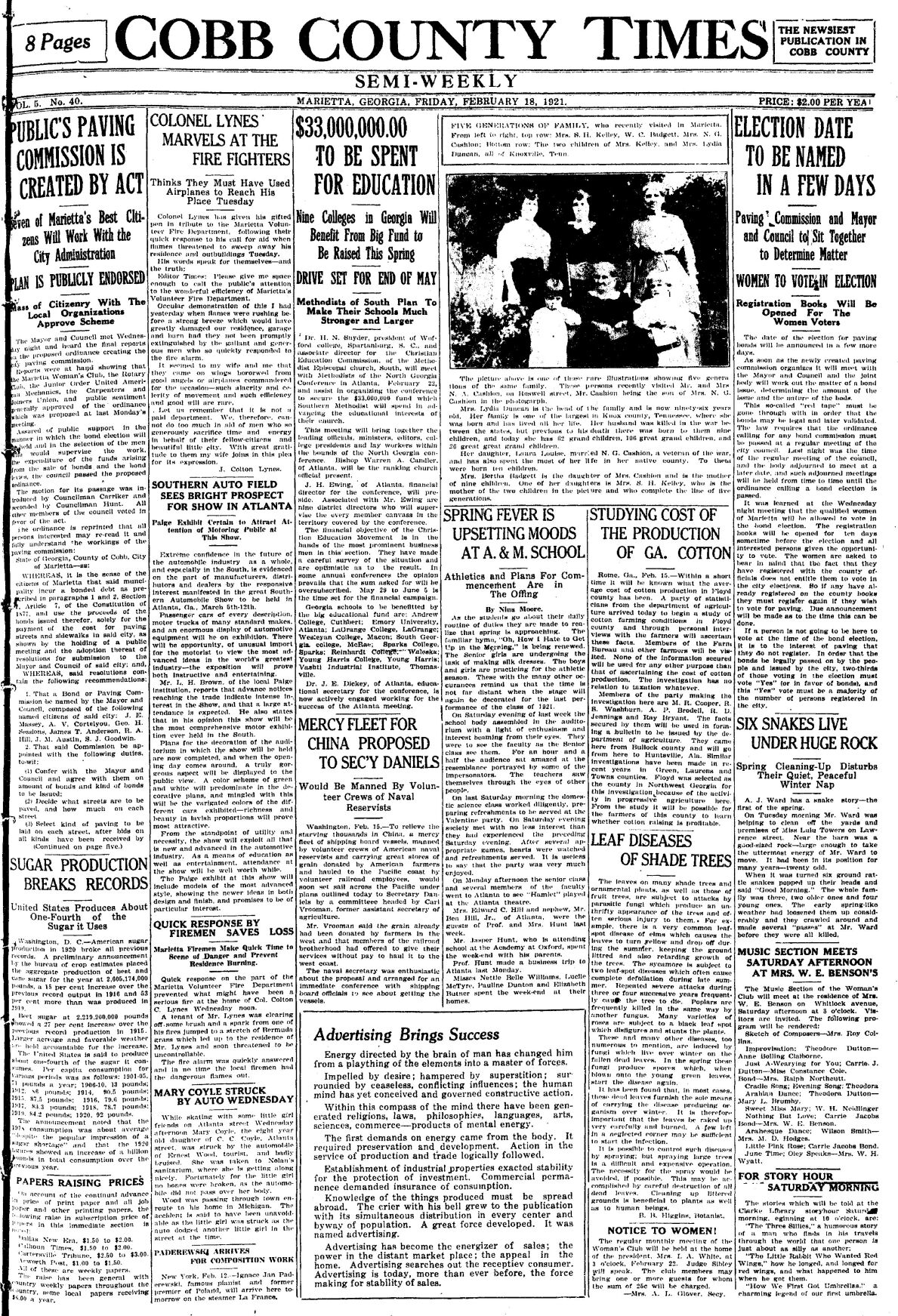 The Friday, Feb. 18, 1921, edition of The Cobb County Times reported that the Marietta Volunteer Fire Department saved the home of Col. Colton C. Lynes the Wednesday before. A tenant of Col. Lynes was clearing off some brush when a strong breeze carried a spark from one of the man’s fires to a stretch of Bermuda grass and sent flames rushing up to the residence. Following the event, Col. Lynes wrote to the Times editors and had his letter printed on the front page calling attention to “the wonderful efficiency” of the department.

A.J. Ward told a snake story on the front page of the paper. The Tuesday before, Ward was helping clean off the yard of Miss Lulu Towers on Lawrence Street. Near the barn was a large rock that had sat there for 20 years. Moving the rock, Ward was surprised when six rattlesnakes popped up their heads and made several “passes” at Ward before they were killed.

The editors picked up a national story that said the amount of money American women were spending on “beautifiers, candy and foibles” could finance the nation’s naval program, including construction of new ships. In 1920, women spent approximately $500 million on perfumes, cosmetics, scented soaps, jewelry, diamonds and ostrich feathers for fans and hats. The cost for the Navy for 1921 was going to be $343 million. The article said “that little habit of Milady America of powdering her nose during 1920” cost approximately $50 million or enough to build a giant dreadnaught with $15 million left over.

The Friday, Feb. 18, 1921, edition of The Marietta Journal reported at a meeting of the Mayor and Council the Wednesday before, the paving plan drawn up by Marietta residents and endorsed by several local organizations was submitted for approval and passed.

Mary Coyle, the six-year-old daughter of Mr. and Mrs. C.C. Coyle of Atlanta Street in Marietta, was reported as being run down and badly bruised by an automobile driven by Ernest E. Wood, a Kansas tourist that was passing through the city Wednesday afternoon. Mary was skating with some other girls and was unaware of the approaching car. She was knocked down, skinned and bruised about the head and body, but no bones were broken.

“The town (Marietta) is so full of measles that it is impossible to name the many youngsters ill with them. It seems as though every small girl or boy in town is either just getting over the measles, or, wort of all, just in the midst of measles. The paper would itself, positively break out with measles if we said any more about them.”

In the “News From Our Correspondents” column, the Kennesaw correspondent wrote that Arthur Trippe, 18, son of Mr. and Mrs. William Trippe, who live on the Etowah River at Gault’s Ferry, was drowned the week before and his body had not been recovered.

Construction on the Allatoona Dam was reported as having begun the day before in the Tuesday, Feb. 19, 1946 edition of The Marietta Daily Journal. Once completed, the project would furnish some 20 miles of lake front in Cobb County near Acworth. The blast of dynamite, which opened the way for work on the dam, tore a huge gap in the north side of Allatoona Gorge in the center where the dam was going to stand.

Lt. John E. “Jack” Lowry Jr. of Smyrna was declared in the Wednesday, Feb. 20, 1946 paper as dead by the War Department. Lt. Lowry was co-pilot on a B-2 Liberator bomber, which departed Nanumea Ellice Islands on a strike-reconnaissance mission to the Marshall Islands on Dec. 21, 1943. His plane sustained damage from enemy anti-aircraft shortly after leaving the target. After dropping behind the formation and losing altitude, the plane was seen crashing into the sea 95 miles from Naloelay Atoll in the Marshall Islands. He had been listed as missing in action since Dec. 21, 1943.

Cobb County Civil War veteran widows were reported in the Thursday, Feb. 21, 1946 paper as receiving $20 more per month beginning March 1, 1921. The pension that had been paid by the State of Georgia was $30 month.

♦The home of J.C. Clevenger, off Roswell Road near Camp Ground, was completely destroyed by fire the day before. The source of the fire was an oil stove explosion that scattered burning oil throughout the house. No one was home at the time. Clevenger was at work on his nearby airfield and his wife was shopping in Marietta. The hangars near the home were not damaged by flames, but the airplanes were removed to the runway for safety.

♦Army Air Force officials inspected Rickenbacker Field at the Bell Bomber Plant the day before with an eye on possibly taking over the field and abandonment of the 27 acres occupied at the municipal airport in Atlanta. Col. C.G. Woolley, representing the office of Brig. Gen. Robert Kauch, of the Army’s Air Installation Division, Washington, made the inspection. He was accompanied by Lt. Col. Clayton Scott, commander of the Army’s base at the Atlanta field.