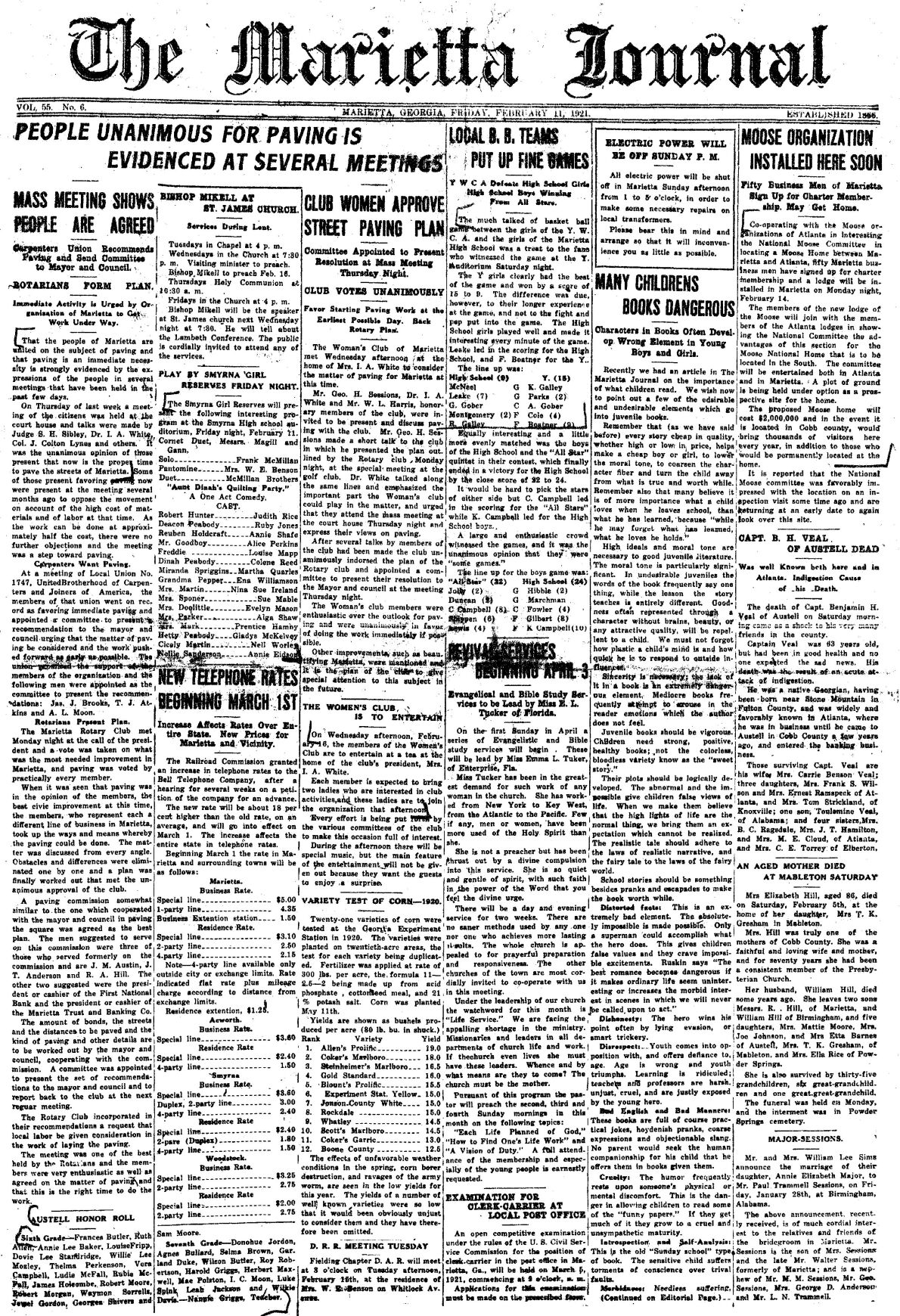 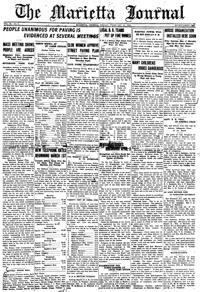 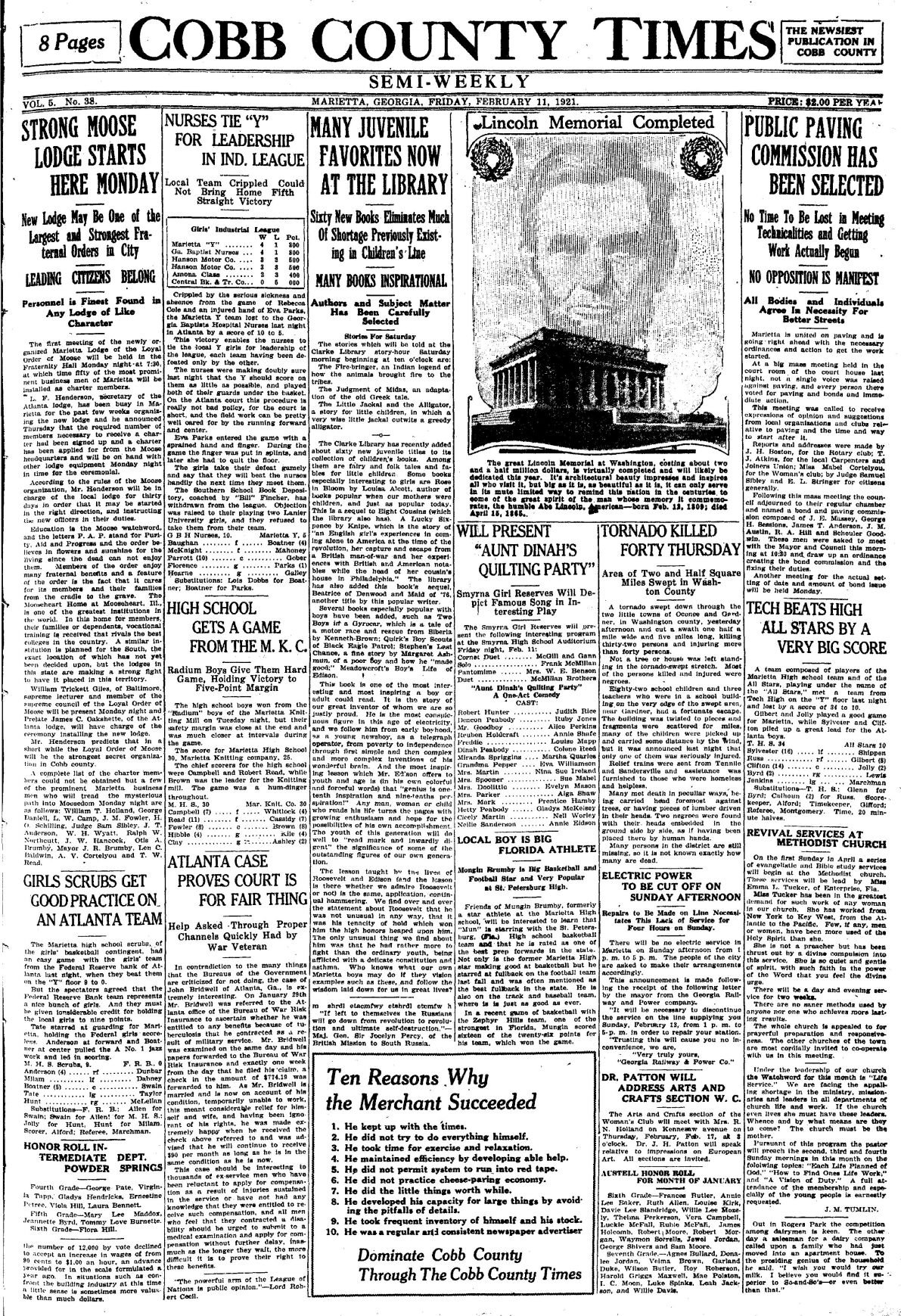 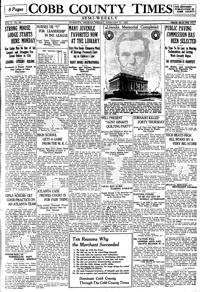 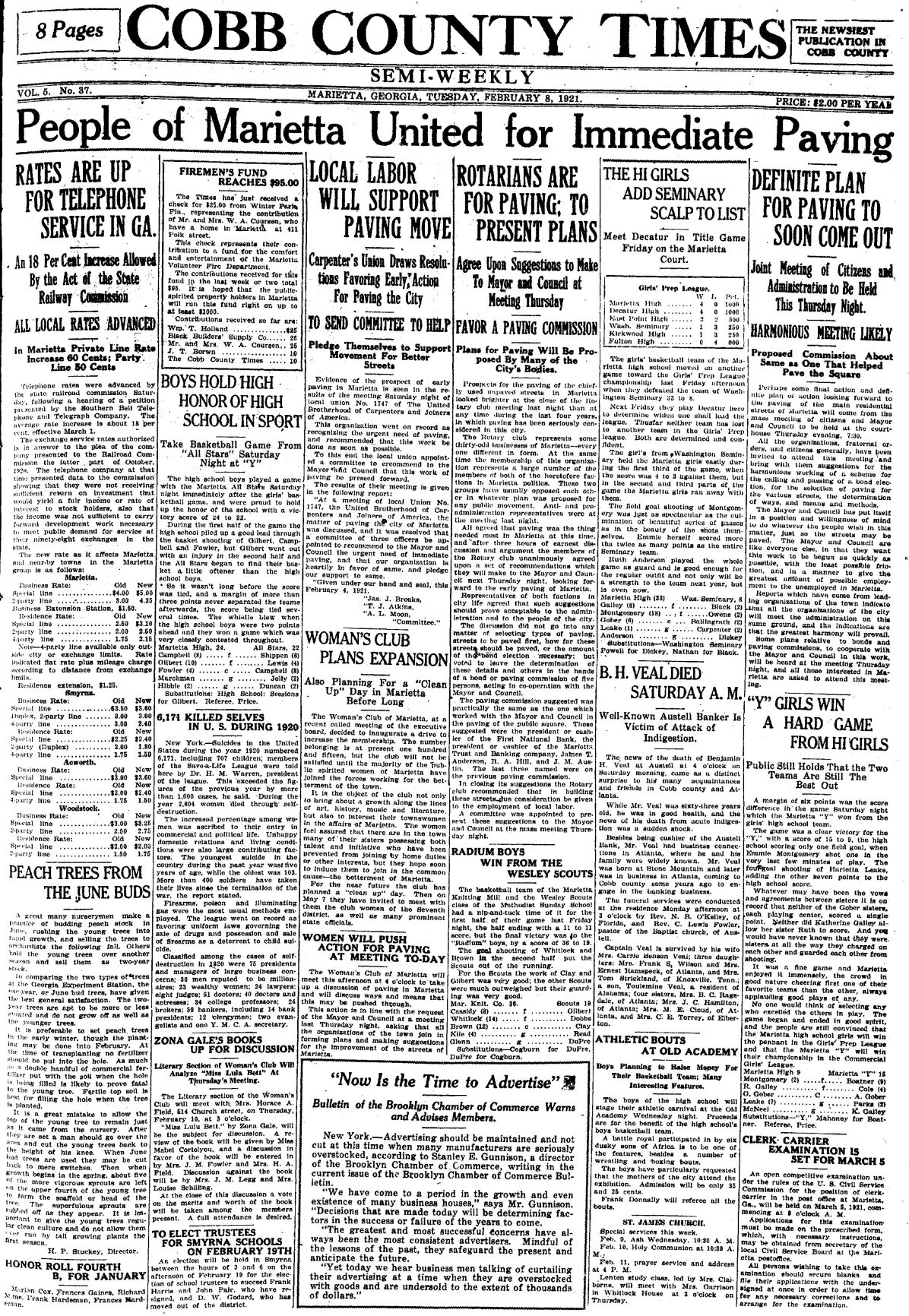 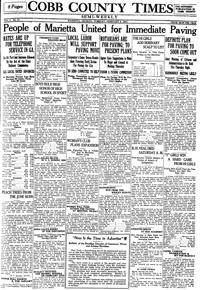 The Tuesday, Feb. 8, 1921, edition of The Cobb County Times reported that the local union No. 1747 of The United Brotherhood of Carpenters and Joiners of America went on record the Saturday before as recognizing the urgent need of paving streets in the city. At the close of their meeting the night before, the Rotary Club of Marietta also wanted serious consideration of paving the “chiefly used unpaved streets” in the city. Street paving had become a major issue of the last four years.

The Friday, Feb. 11, 1921, edition of The Cobb County Times reported that following various bodies and individuals agreeing that better streets was a necessity, the city of Marietta became united on paving and began the necessary ordinances and action to get the work started. At a mass meeting held in the court house the night before, there wasn’t a single voice raised against the paving issue and everyone in attendance voted for paving, bonds and immediate action.

A deadly tornado was reported as sweeping through the towns of Oconee and Gardner in Washington County the afternoon before and cutting a one-and-a-half mile wide and five-mile-long swath that erased every tree and house in its path. The tornado was responsible for the deaths of 32 people and more than 40 injuries. There were also many people reported missing.

The Friday, Feb. 11, 1921, edition of The Marietta Journal reported in the Orange Hill section of the “News From Our Correspondents” column, on the death and funeral of T.S. Clay. The funeral was held in Mt. Harmony the Saturday before. Clay had been discovered sitting dead in his chair the Friday morning before his funeral by neighbors. He passed just 10 days after his sister, Rebecca.

The following items were reported in the Monday, Feb. 11, 1946, edition of The Marietta Daily Journal:

♦Allatoona Dam, according to Col. Mark M. Boatner, Mobile District Army engineer, would require more than eight million pounds of steel for its construction. In addition to the steel, over a half-million cubic yards of concrete and 500,000 barrels of cement would go into the building of the structure.

The dam, located on the Etowah River approximately 25 miles upstream from Rome and five miles east of Cartersville, was to be a gravity type that was curved in plan to fit foundation conditions, with a maximum height of approximately 200 feet and a total length of 1,325 feet.

♦James Gilbert Patterson, 25, was reported as having died instantly after the car in which he was riding plunged off the highway near LaFayette and crashed into a telephone pole.

Patterson was a veteran discharged from the Army in January 1946 at Fort McPherson after 30 months of overseas duty with the 130th infantry. A member of the Marietta National Guard, his military service saw him awarded the American Theater Ribbon, the Asiatic-Pacific Ribbon with two bronze stars, the Good Conduct Medal, the Combat Infantry Badge and the WWII Victory Medal.

♦A huge column of smoke rising from the Bell Bomber plant in Marietta sent a flood of calls into the Marietta and Bell fire departments. “Smoky Joe” Dunbar, fire chief at the plant, quelled citizens’ fears by explaining that the salvage department was disposing of several hundred gallons of used oil. The fire at the disposal plant was a half-mile south of the main building.

The perfect fire record at the mammoth installation remained unblemished. Only one major fire took place during the two years of production and that was caused by faulty wiring in a B-29.

♦Georgia was reported as having its first Congresswoman in Helen Douglas Mankin.

Mankin, who had an officer son in the Merchant Marines, beat 17 male candidates in the special election for the Fifth District Democratic post vacated by Rep. Robert Ramspeck, who was leaving for “a more lucrative position.” Mankin’s principal opposition had come from Thomas Camp, who was Ramspeck’s secretary for several years. Mankin won 10,992 votes to Camp’s 10,144.

Carriker, born in Pike County in 1873, came to Marietta in 1902 and was employed as cashier and head bookkeeper at the Marietta Chair Company. He later held the same job with McNeel Marble Company and the Marietta Knitting Company. He served from 1916-1927 as the first secretary of the Marietta Golf Club. For nine years he was Marietta’s city clerk and served four years on the city council as mayor pro-tem and ex-officio member of the Board of Lights and Water Works. He became chairman of the board from 1924-1927.