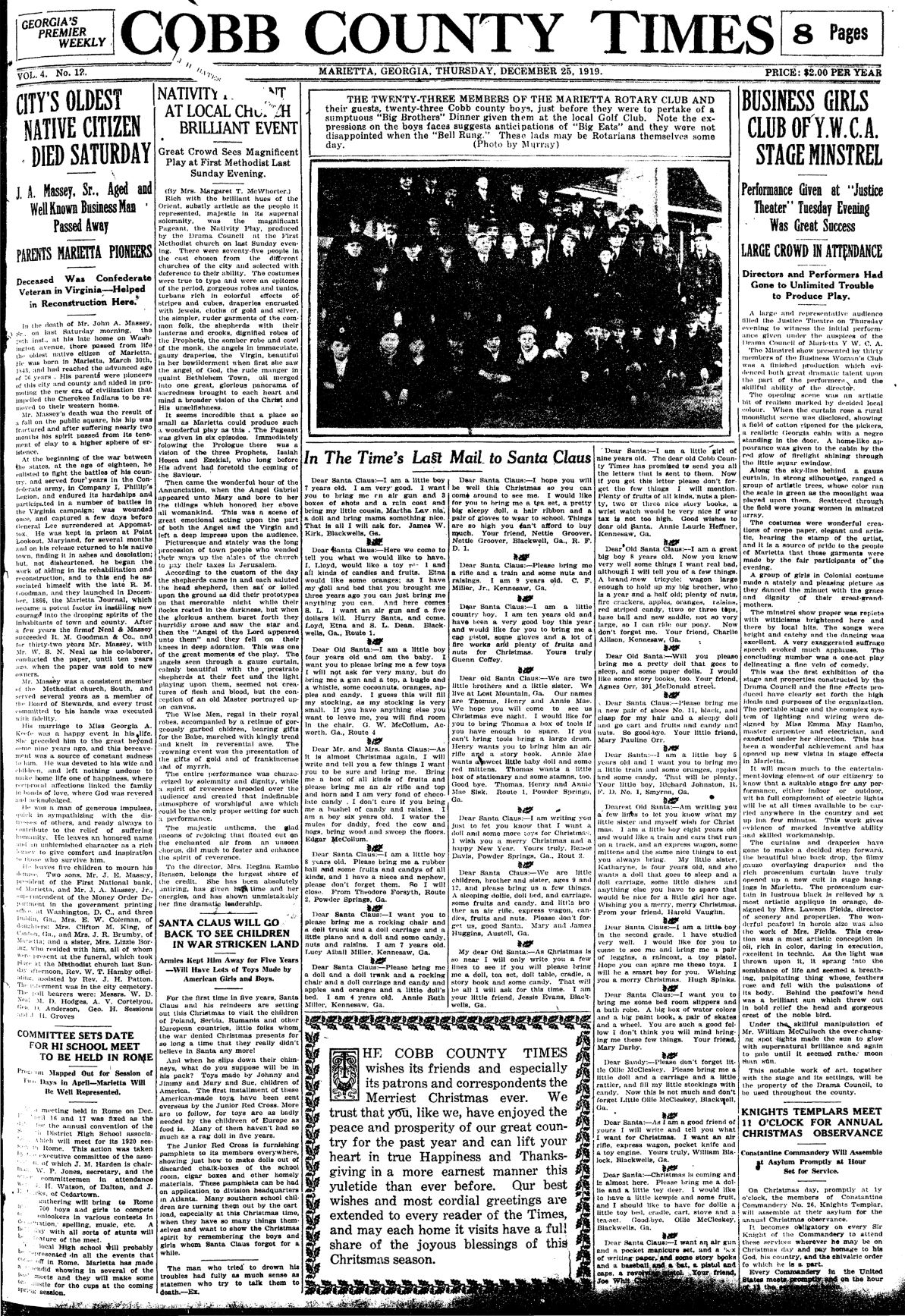 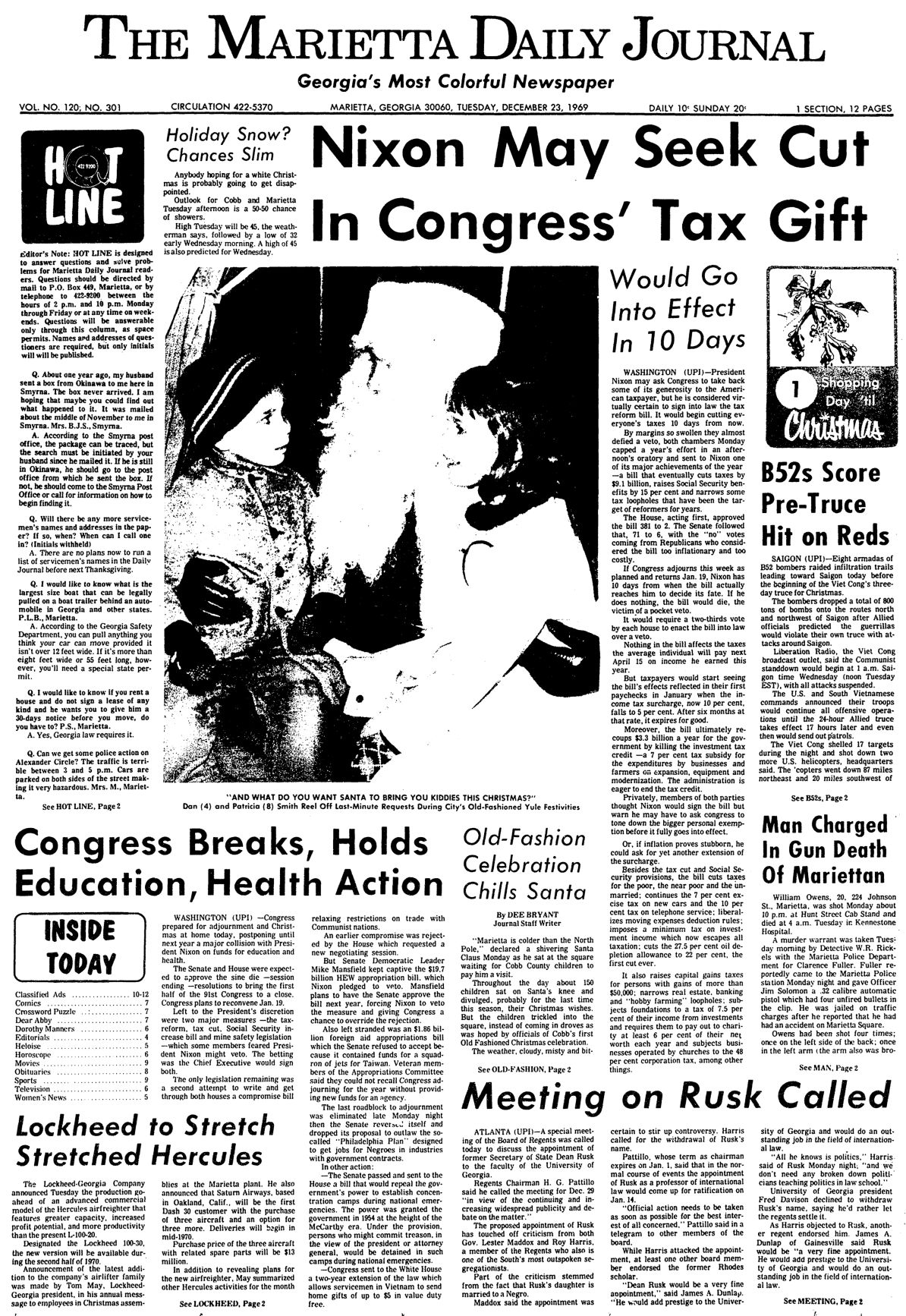 The Thursday, Dec. 25, 1919, edition of The Cobb County Times reported that Marietta’s oldest native citizen died the Saturday before at his home on Washington Avenue. John A. Massey Sr., 76, was a well-known businessman and Confederate veteran, who was born in Marietta on March 30, 1843.

Massey’s death was the result of a fall on Marietta Square where his hip was fractured.

At 18, Massey enlisted to fight in the Civil War. He served four years in the Confederate Army in Company I, Phillip’s Legion and fought in a number of battles in the Virginia campaign.

He was wounded once and was captured a few days before General Robert E. Lee surrendered at Appomatox. He was held for several months at Point Lookout, Maryland, and upon his release returned to Marietta to find it “in ashes and desolation.”

In December 1866, Massey and R.M. Goodman together launched The Marietta Journal. After a few years, the firm of Neal & Massey succeeded R.M. Goodman & Co. and for 32 years Massey with W.S.N. Neal conducted the paper until 10 years ago when the paper was sold to new owners.

On the front page, the Times editors ran the following letters to Santa Claus:

♦ “Dear Old Santa — I am a little boy, four years old and am the baby. I want you to please bring me a few toys. I will not ask for very many, but do bring me a gun, a top, a bugle, a whistle, some coconuts, oranges, apples and candy. I guess this will fill my stocking, as my stocking is very small. If you have anything else you want to leave me, you will find room in the chair. — G.W. McCollum, Acworth, Route 4.”

♦ “Dear Santa Claus — I hope you will be well this Christmas so you can come around to see me. I would like for you to bring me a tea set, a pretty big sleepy doll, a hair ribbon and a pair of gloves to wear to school. Things are so high you can’t afford to buy much. Your friend, Nettie Groover, Blackwell, R.F.D. 1.”

♦ “Dear Santa — I am a little girl of nine years old. The dear old Cobb County Times has promised to send you all the letters that are sent to them. Now if you get this letter, please don’t forget the few things I will mention. Plenty of fruits of all kinds, nuts a plenty, two or three nice story books, a wrist watch would be very nice if the war tax is not too high. Good wishes to dear old Santa. — Annie Laurie Heffner, Kennesaw.”

♦ “Dear Santa Claus — I am a little boy in the second grade. I have studied very well. I would like for you to come to see me and bring a pair of leggings, a raincoat and a toy pistol. Hope you can spare me these toys. I will be a smart boy for you. Wishing you a merry Christmas — Hugh Spinks.”

There wasn’t a Friday, Dec. 26, 1919, edition of The Marietta Journal. Both newspapers had been writing articles in previous editions about a newsprint shortage hitting the nation’s papers. It is believed that the Journal did not publish an edition for this week due to the shortage and the Christmas holiday.

In the Monday, Dec. 22, 1969, Marietta Daily Journal it was reported that the arrest of a 15-year-old boy by the Kennesaw Police Department was going “to clear up” the 75 burglaries of schools, homes and businesses that had taken place in Cobb County within the past year.

The Lockheed-Georgia Company’s president Tom May was reported in the Tuesday, Dec. 23, 1969, paper as having announced during his annual message to employees at the Marietta plant’s Christmas assemblies the production go-ahead for a new version of the Hercules.

Designated the L-100-30, the new version was expected to be available in the second half of 1970. Saturn Airways, an Oakland, California based company, was “the first Dash 30 customer” with the purchase of three aircraft and the option for three more.

Also that day, a three-month-old baby girl was reported as being returned to her mother after “being found in the floorboard between the rear and front seats of a car with a blanket stuffed about 10 inches into her mouth and throat.”

Cobb Police investigated after spotting the driver parked at an old abandoned home where numerous stolen cars had been recovered. After arresting the driver for “taking a swing” at one of the officers, Cobb Police discovered the child and took her to Kennestone Hospital for treatment.

A third story that day reported that fire damaged the Dairy Queen on Bankhead Highway in Mableton. The fire started in the kitchen next to the surface units. The restaurant was closed at the time and the fire was reported by a waitress at a nearby Waffle House restaurant.

The U.S. Command was reported in the Friday, Dec. 26, 1969, paper as having held back its B52 bombers for seven hours after the end of the Allies’ Christmas truce in Vietnam, then sent them on five strikes against Communist infiltration routes. American and South Vietnamese troops concluded their 24-hour standdown at 6 p.m. on Christmas night, but the Viet Cong’s three-day truce was supposed to last until 1 a.m. that Saturday.

Military spokesmen said that the Communists initiated 115 shooting incidents during the Allied truce, wounding three Americans. This made the cease-fire less costly than any of the three previous Christmas standdowns. Reports also listed 101 Viet Cong or North Vietnamese were slain in truce fighting, with South Vietnamese loses counted at 11 dead, 19 wounded and two missing.