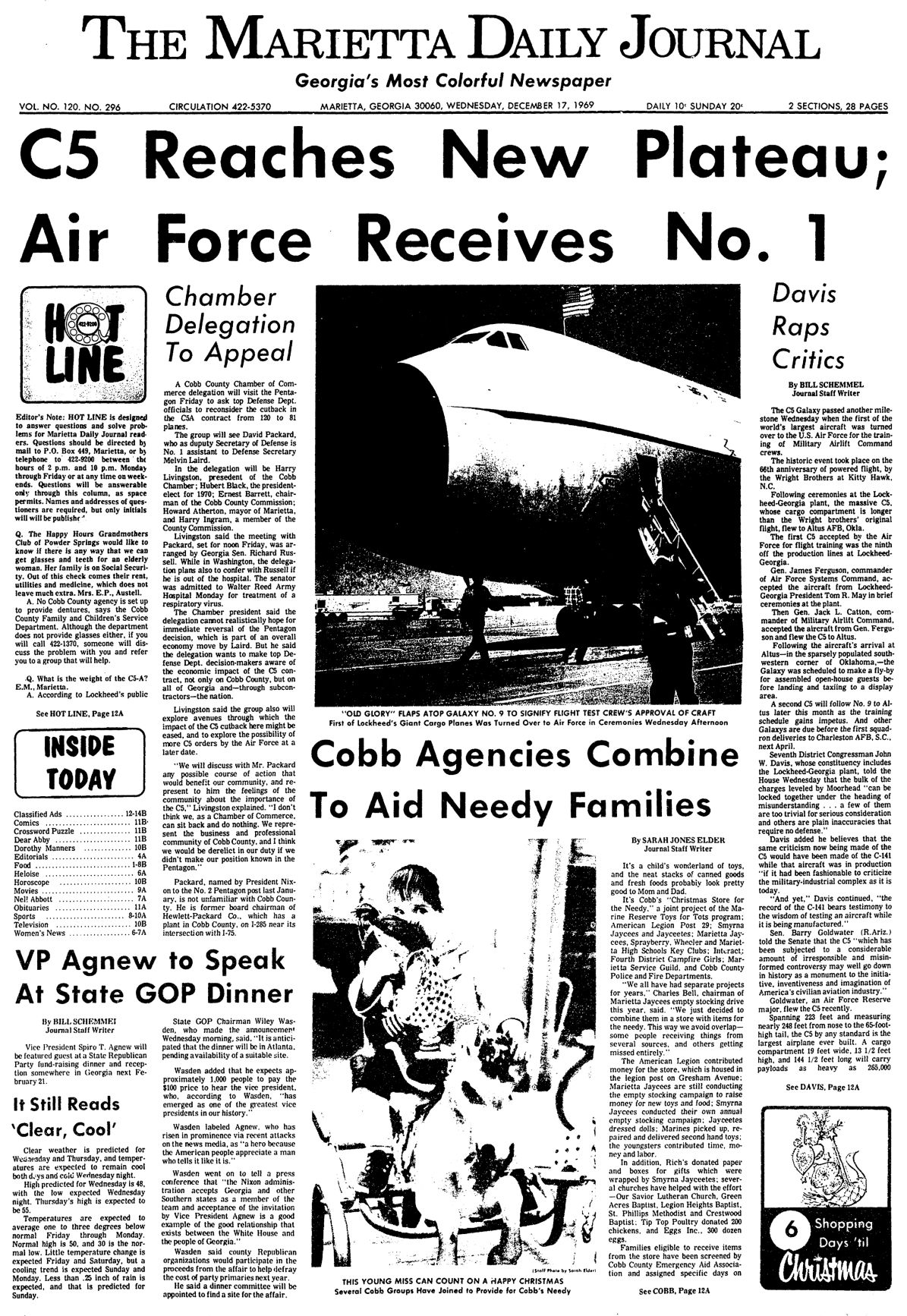 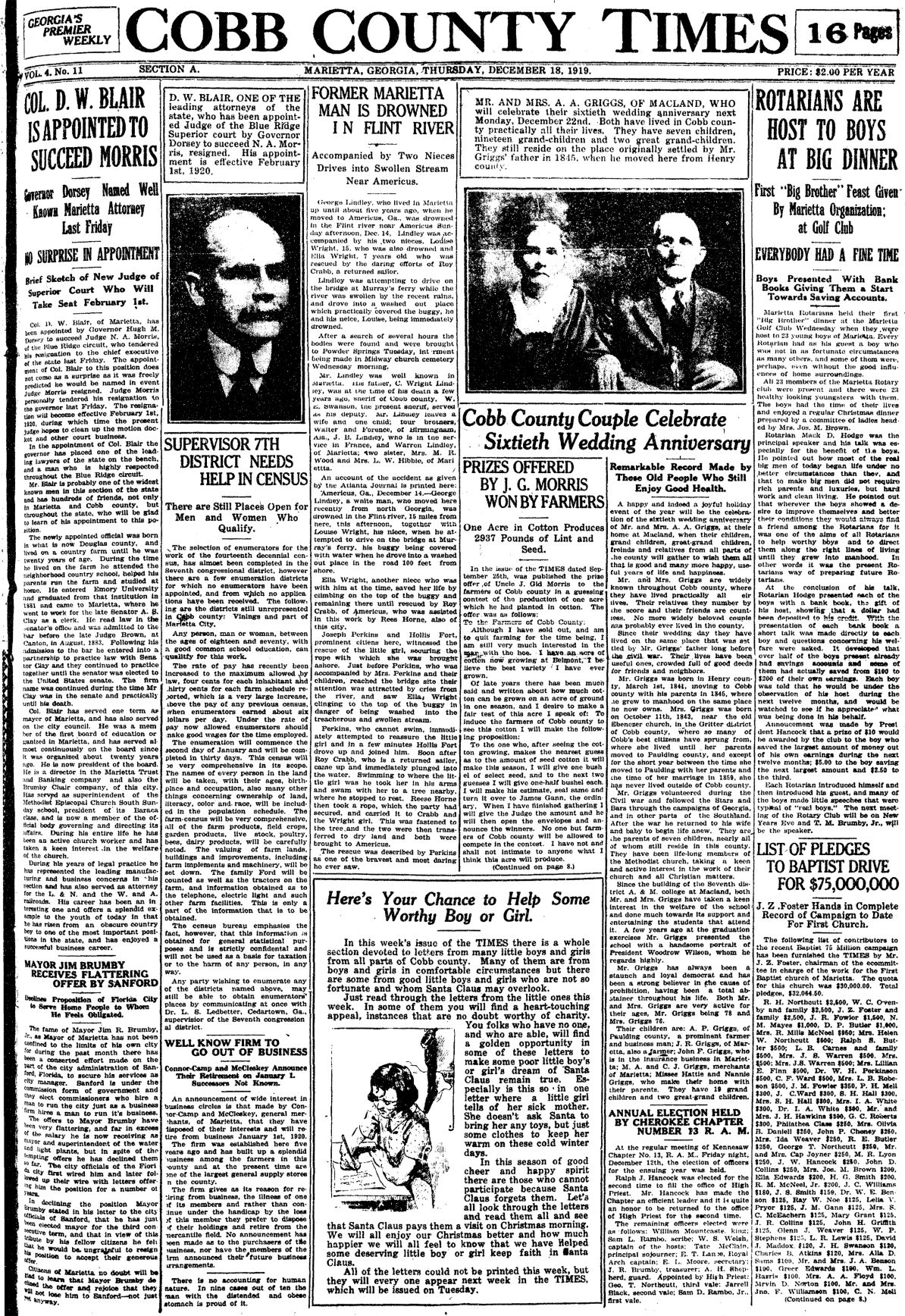 The Thursday, Dec. 18, 1919, edition of The Cobb County Times reported that George Lindley, who lived in Marietta up until a few years earlier, had drowned in the Flint River near his home in Americus the Sunday before.

Lindley was attempting to drive on the bridge at Murray’s Ferry while the river was swollen from recent rains. Hitting a washed out place, which swallowed the buggy, Lindley and his two nieces, Louise Wright, 15, and Ella Wright, 7, sank into the water. Lindley and Louise drowned immediately, but Ella was rescued by Roy Crabb, a returned World War I sailor.

After a several hours-long search, the bodies of Lindley and Louise were found. They were returned to Powder Springs the Tuesday before and then buried in the Midway Church cemetery the Wednesday before.

Lindley was well known in Marietta. His father was C. Wright Lindley, who was the Sheriff of Cobb County before current Sheriff W.E. Swanson.

Col. D.W. Blair of Marietta was reported as being appointed by Gov. Hugh M. Dorsey to succeed Judge N.A. Morris of the Blue Ridge Circuit.

Morris had personally tendered his resignation to Dorsey the Friday before with an effective date of Feb. 1, 1920. Morris was quoted as saying that before his resignation date, he hoped to clean up the motion docket and other business of the circuit court.

Dorsey was reported as now having “one of the leading lawyers of the state on the bench, and a man who is highly respected throughout the Blue Ridge Circuit.”

The Rotarians were reported as holding their first “Big Brother” dinner at the Marietta Golf Club the Wednesday before where they hosted 23 young Marietta boys who were “not in as fortunate circumstances as many others.” The boys enjoyed a Christmas dinner prepared by a committee of ladies and listened to a speech by Mack D. Hodge.

Hodge told the boys that “most of the real big men of today began life under no better circumstances than they, and that to make big men did not require rich parents and luxuries, but hard work and clean living.” At the end of his talk, he presented each of the boys with a bank book that had a dollar deposited in their name.

The 60th wedding anniversary for Mr. and Mrs. A.A. Griggs of Macland, which would be Dec. 22, 1919, was announced on the front page with a picture of the couple. They had seven children, 19 grandchildren and two great-grandchildren. The couple had lived in Cobb County almost all of their lives and resided on the land originally settled by Mr. Griggs’ father in 1845, when he moved to Cobb from Henry County.

There wasn’t a Friday, Dec. 19, 1919, edition of The Marietta Journal. Both newspapers had been writing articles in previous editions about a newsprint shortage hitting the nation’s papers. It is believed that the Journal did not publish an edition for this week due to the shortage and the Christmas holiday.

In the Monday, Dec. 15, 1969, Marietta Daily Journal it was reported that the U.S. Command officially announced the completion of President Richard Nixon’s “Phase Two” withdrawal of 25,000 men from Vietnam. It was also announced that another 11,500 had left without fanfare. These men had been expected to be part of the “Phase Three” pullout.

Field reports said that the Saigon army bore most of the combat reported the day before, killing 193 Viet Cong and North Vietnamese in 10 fights. American losses were described as light in fighting ranging from the northern war zone to the Mekong Delta.

During scattered fighting in the same period, U.S. troops reported killing at least 72 guerrilla troops. Three Americans were killed and 27 were wounded in both fighting and a dozen overnight shelling attacks.

The C5 Galaxy was reported in the Wednesday, Dec. 17, 1969, paper as having passed a new milestone when the first of the world’s largest aircraft was delivered to the U.S. Air Force for the training of Military Airlift Command crews. The event took place on the 64th anniversary of powered flight by the Wright Brothers at Kitty Hawk, North Carolina.

Following ceremonies at Lockheed’s Marietta plant, the C5 flew to Altus Air Force Base in Oklahoma. The plane was the ninth off the production lines at Lockheed-Georgia. Gen. James Ferguson, commander of the Air Force Systems Command, accepted the aircraft from Lockheed-Georgia President Tom R. May at the plant.

Eighty-one Georgia school districts were reported in the Thursday, Dec. 18, 1969, paper as being told to desegregate by Sept. 1, 1970, or lose public funding by a three-judge federal panel the day before. The panel upheld the Justice Department’s school desegregation suit against the entire state school system. The judges were “adamant” that dual school systems had to be eliminated in Georgia.

This week’s Time Capsule looks at a cotton mill, a jail escape, fundraisers, a Vietnam Santa Claus and an earthquake.