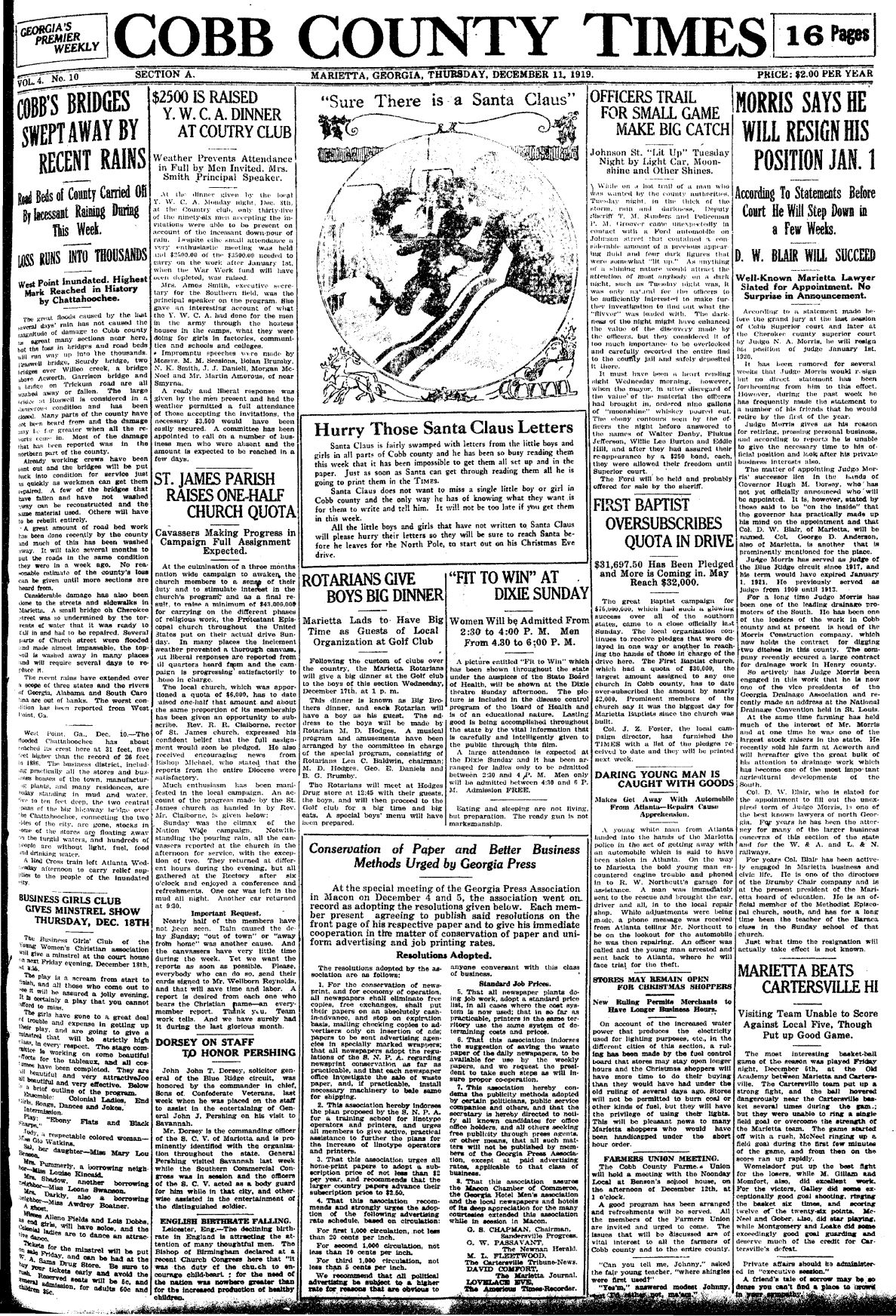 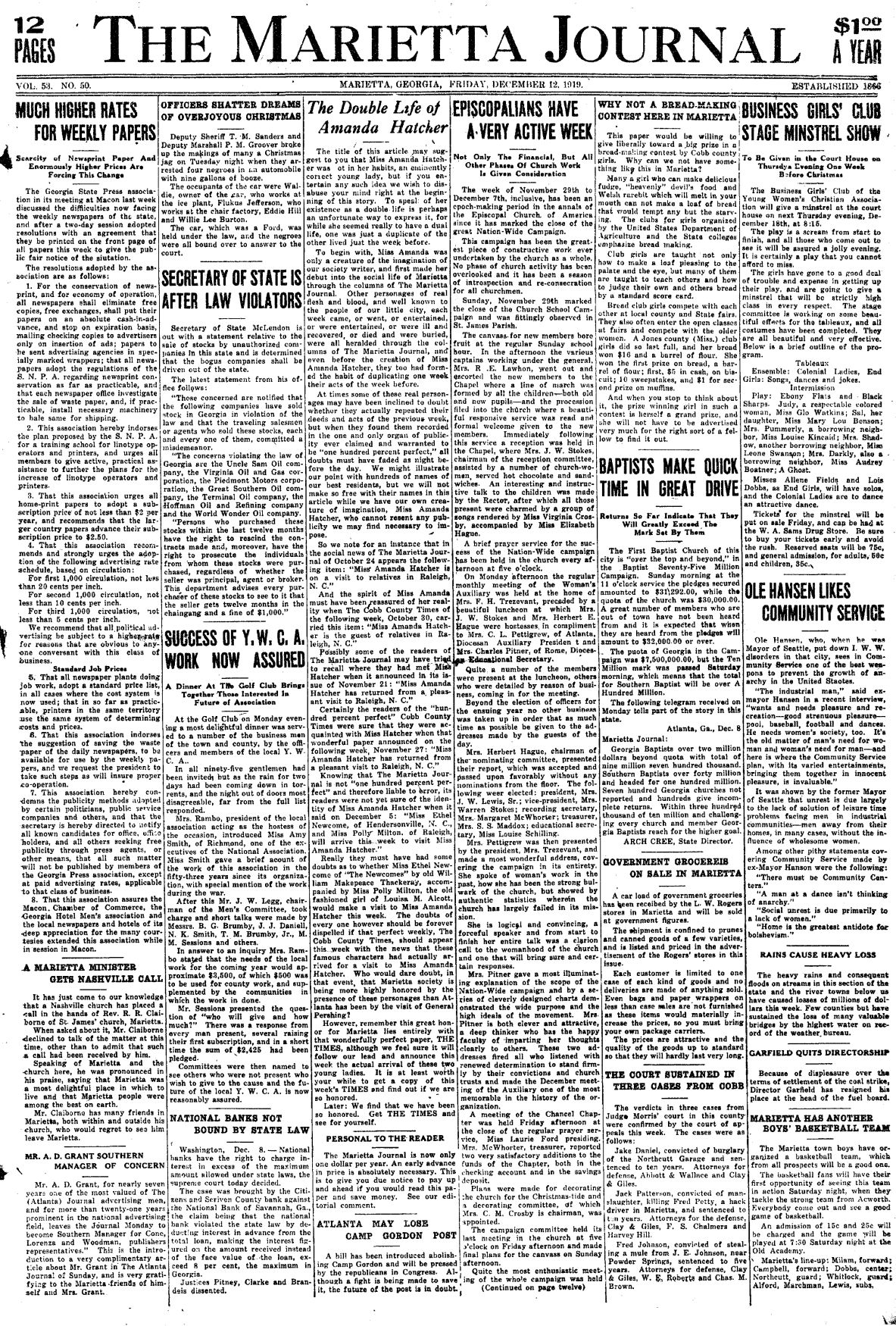 This week’s Time Capsule looks at flooding, a stolen car arrest, a bread contest and the first black person in Georgia appointed to a major state board.

The Thursday, Dec. 11, 1919, edition of The Cobb County Times reported that because of the flooding from recent rains, there were several bridges and road beds that had been washed away.

Braswell Bridge, Neurdy Bridge, two bridges over Willeo Creek, a bridge above Acworth, Garrison Bridge and a bridge on Trickum Road had all been swept downstream or had fallen. A large bridge in Roswell was closed after it was determined to be too dangerous to cross.

Several parts of the county had not been heard from and the Times editors believed that there may be more damage reported later.

Deputy Sheriff T.M. Sanders and Policeman P.M. Groover were reported as tracking a wanted man “in the thick of the storm, rain and darkness” when they unexpectedly came across a Ford automobile on Johnson Street the Tuesday before. The car contained four black men and nine gallons of moonshine whiskey.

Another front page story reported that a young Atlanta man was arrested by Marietta police for car theft.

The young man had stolen the car in Atlanta and, on his way out to Marietta, had engine trouble. He called Ralph W. Northcutt’s garage for assistance. After the car and driver were brought to the garage, Northcutt received a phone call from Atlanta to be on the lookout for the car that he was repairing.

John T. Dorsey, solicitor general of the Blue Ridge circuit, was honored by the commander in chief of the Sons of Confederate Veterans the week before when he was placed on the staff to assist in entertaining World War I Gen. John J. Pershing on his visit to Savannah. Dorsey was the commanding officer of the S.C.V. in Marietta.

On the front page of the Friday, Dec. 12, 1919, edition of The Marietta Journal, the Journal editors wrote: “Many a girl who can make delicious fudge, ‘heavenly’ devil’s food and Welsh rarebit which will melt in your mouth can not make a loaf of bread that would tempt any but the starving.”

With clubs being organized by the U.S. Department of Agriculture and the state colleges’ emphasis on bread making, the editors went on to say that they would “be willing to give liberally toward a big prize in a bread-making contest by Cobb County girls.”

A bill was reported as being introduced in the state legislature to abolish Camp Gordon, which was the training camp for most of Cobb County’s boys prior to the fighting in France during WWI. The article said that the issue was “being pressed by the Republicans in Congress” and that “although a fight is being made to save it, the future of the post is in doubt.”

On the Editorial Page, the editors wrote the following items:

♦ “Last week we had a news item telling of a Georgia bull winning the championship of the world, while this week we print the news of a Georgia hog taking the honors. Georgia already wears the watermelon, the apple and the peach honors. Show us something else to do.”

An article on Page 5, listed “Quality King Jr., the one-year-old Duroe-Jersey boar grown by Peacock & Hodge” in Cochran, Ga., as having won the world grand championship at the International Live Stock exposition in Chicago the Friday before.

♦ “If you think you have nothing for which to be thankful, go read again the story of Tiny Tim. And then think a bit on the lot of French war orphans, and the indescribable sufferings of the helpless Armenians. Surely no one in America can do this and not call this a blessed Christmas with as much for which to give thanks.”

In the “News From Our Correspondents” column, the Macland correspondent Ruby reported on an artesian well being dug at the 7th District Agricultural and Mechanical School in Powder Springs, which is now the campus of McEachern High School.

In the Tuesday, Dec. 9, 1969, paper it was reported that Georgia Gov. Lester Maddox had named Graham Jackson, 66, of Atlanta to the State Board of Corrections.

The appointment marked the first time a black person had been appointed to a major state board. Jackson, an entertainer who had toured the country with his accordian and had made several performances before presidents, replaced Stetson Bennett of Jesup.

Bennett had decided not to serve another five-year term after Attorney General Arthur Bolton ruled that his position as clerk of the Wayne County Superior Court precluded his service on the state board.

Dunn’s Variety Store on State 293 in Acworth was reported in the Monday, Dec. 8, 1969, Marietta Daily Journal as having burned before dawn the day before. The fire, whose origin was undetermined, caused $40,000 in damage to the cinderblock and brick veneer building and a loss of $175,000 in stock. Fire officials said that the flames had broken “a large plate glass window at the front of the building and within 10 minutes the wind-whipped flames gutted” the structure.

Homelite Chain Saw Co. on South Atlanta Road was reported in the Friday, Dec. 12, 1969, paper as being hit by burglars for the seventh time in a year.