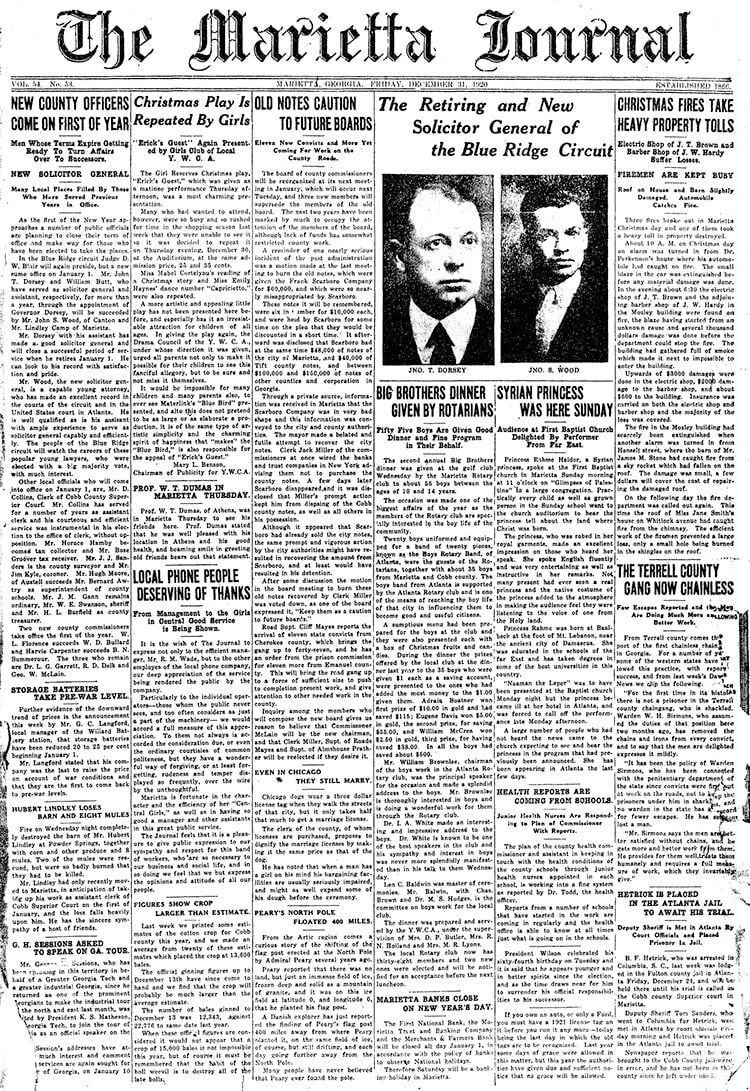 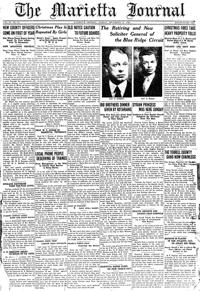 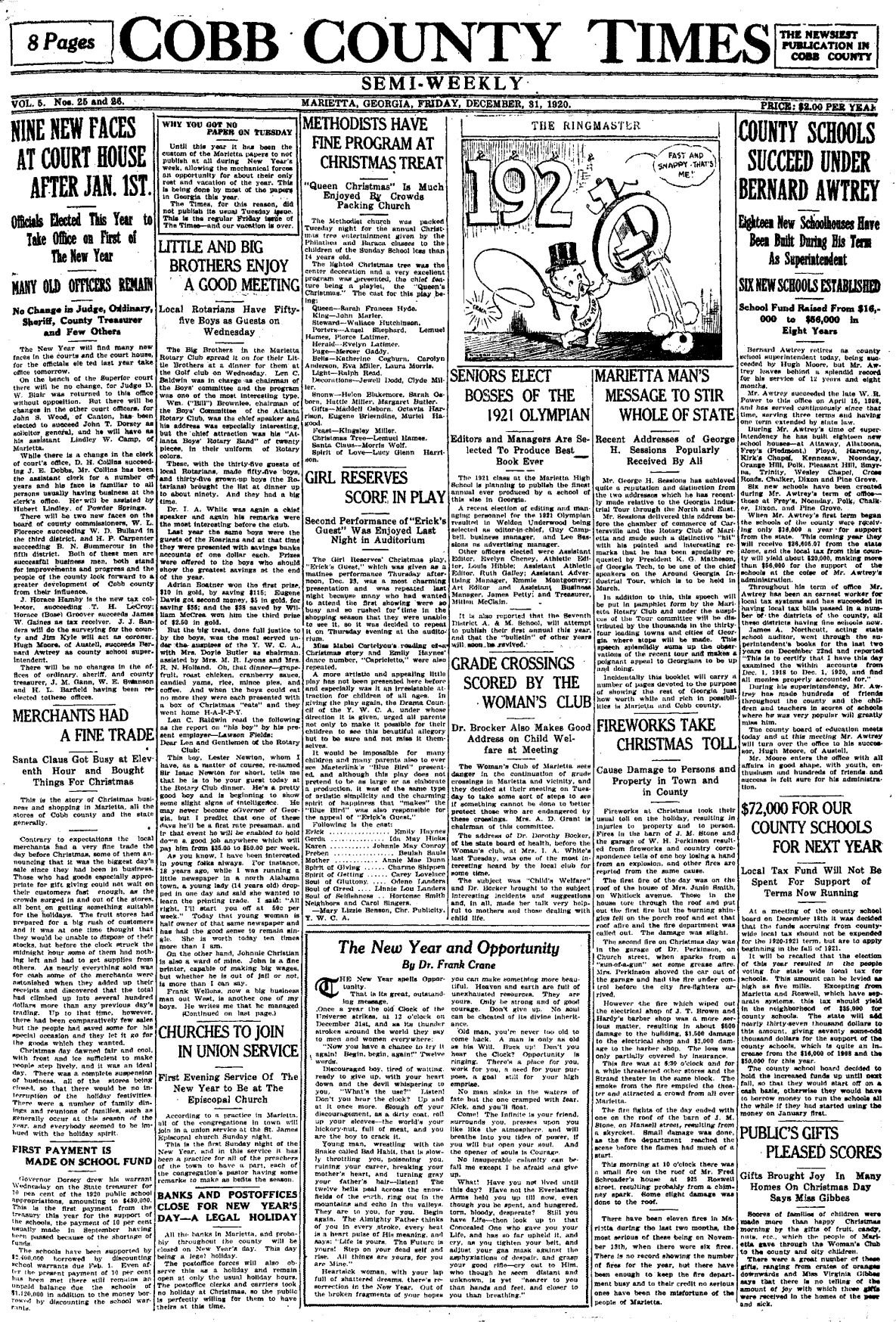 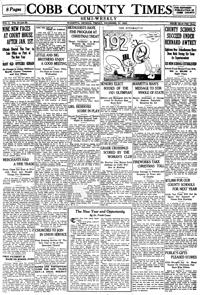 The Friday, Dec. 31, 1920, edition of The Cobb County Times reported that Christmas Day fireworks resulted in property damage to several homes and businesses.

The first fire was on the roof of Janie Smith’s home on Whitlock Avenue. Residents in the home “tore through the roof” and put out the fire. However, burning shingles fell on the porch roof and set that ablaze, requiring the fire department to be called out.

The second fire was in the garage of Dr. W.H. Perkinson on Church Street, “when sparks from a ‘sun-of-a-gun’” set some grease on fire. Mrs. Perkinson managed to shove the car out of the garage and had the fire under control before the fire department arrived.

Another fire “wiped out” the electrical shop of J.T. Brown and Hardy’s barber shop. The blaze threatened the Strand Theater and other stores on the block.

A skyrocket was reported as landing on the roof of the barn of J.M. Stone on Hansell Street and started a good blaze before the fire department arrived.

In the “News About the City” column, written by Mrs. Harold Hawkins, it was reported that Pete Schafer’s daughter suffered an accident on Christmas morning. Their eldest son, Howard, while playing with his “blank pistol,” accidentally shot his sister, Lorine, in the eye. She was taken to Wesley Memorial Hospital in Atlanta where an operation was performed to save her eye.

The “News From Our Correspondents” column had the following:

♦The Concord section reported that Mrs. West’s little boy blew his hand off with a dynamite cap the day after Christmas.

♦The Hunter’s Store section reported that the two main bridges on Noonday Creek were down and the road leading to Woodstock was impassable.

The Friday, Dec. 31, 1920, edition of The Marietta Journal reported that Princess Rahme Haider, a Syrian princess, spoke to the First Baptist Church in Marietta the Sunday before on “Glimpses of Palestine” to a large congregation. The princess, who was robed in her royal garments, spoke fluent English and was “very entertaining as well as instructive in her remarks.”

Princess Rahme was born at Baalbeck at the foot of Mt. Lebanon, near the ancient city of Damascus. She was educated in the schools of the Far East and had taken degrees in some of the best universities in the U.S.

A fire the Wednesday before was reported as completely destroying Hubert Lindley’s barn in Powder Springs. He also lost eight mules, corn and other produce. Two of the mules were rescued, but were so badly burned that they had to be put down. Lindley had just moved to Marietta in anticipation of taking up his work as assistant clerk of Cobb Superior Court on Jan. 1, 1921.

The editors wrote the following on the Editorial Page:

”The War Department has a new machine gun of double the range and twice the speed of the old guns, which of course means we must ‘scrap’ the old guns, and spend a few hundred millions for the new type, for the safety of the country, at the expenses of the people, and to the everlasting profit of the armament trust.”

In the Wednesday, Dec. 26, 1945, edition of The Marietta Daily Journal it was reported that W.D. Rutherford was re-elected as mayor of Austell in an election held the Saturday before. Named to serve with Rutherford were the following councilmen: H. McLendon, second ward; W.G. Pharr, third ward; R.S. Rutherford, fourth ward; L.C. Kull and J.L. Ingram, at large. Helen Shupe was the city clerk and tax collector.

A Marietta Bell Bomber-built B-29 was reported in the Friday, Dec. 28, 1945, paper as having established a first. The B-29 “Challenger,” the personal plane of Lt. Gen. James Doolittle until his retirement from the Air Corps., set a 9.5-hour flight record between Los Angeles and the Hawaiian Islands, a distance of 2,235 nautical miles. The Superfort was flown by Col. Bill Irvine, a personal friend of Doolittle.

It was also reported that day that one million square feet of floor space at the Bell Bomber Plant in Marietta was available for immediate lease to private industry. The announcement, made by Joe S. Wingo, secretary of the Cobb County Chamber of Commerce, came after a notice that the Bell plant would be held by the Army on a standby basis. Army Air Force plant representative Col. William M. Altenburg said that only the outside buildings would be available at the time and the buildings ranged in size from 500 to 180,000 square feet. The one stipulation to the lease was that there could be no alterations made on the buildings.