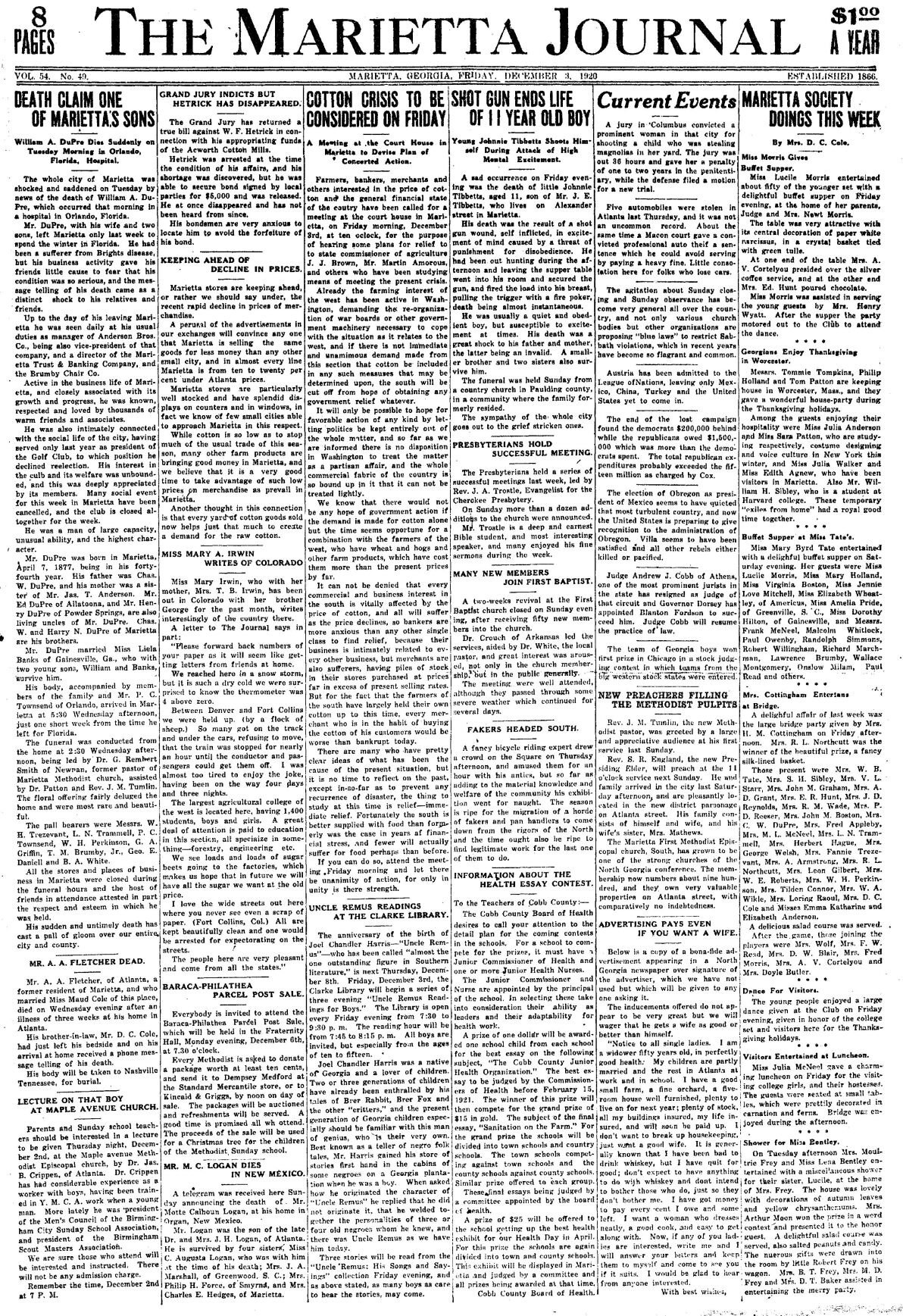 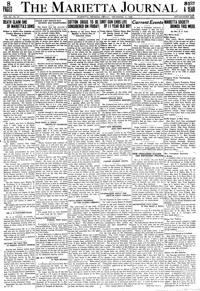 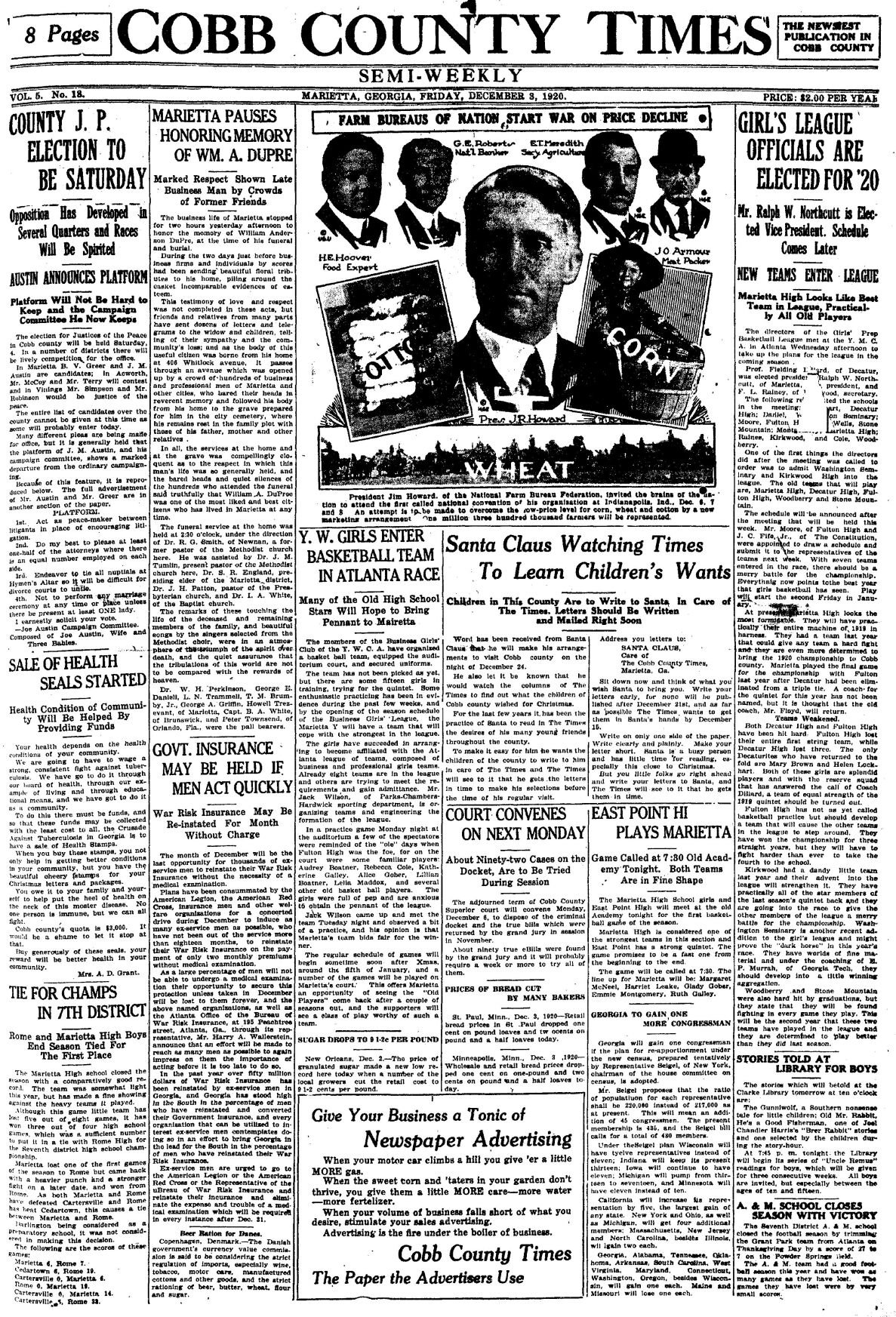 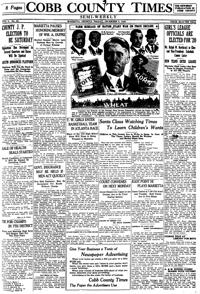 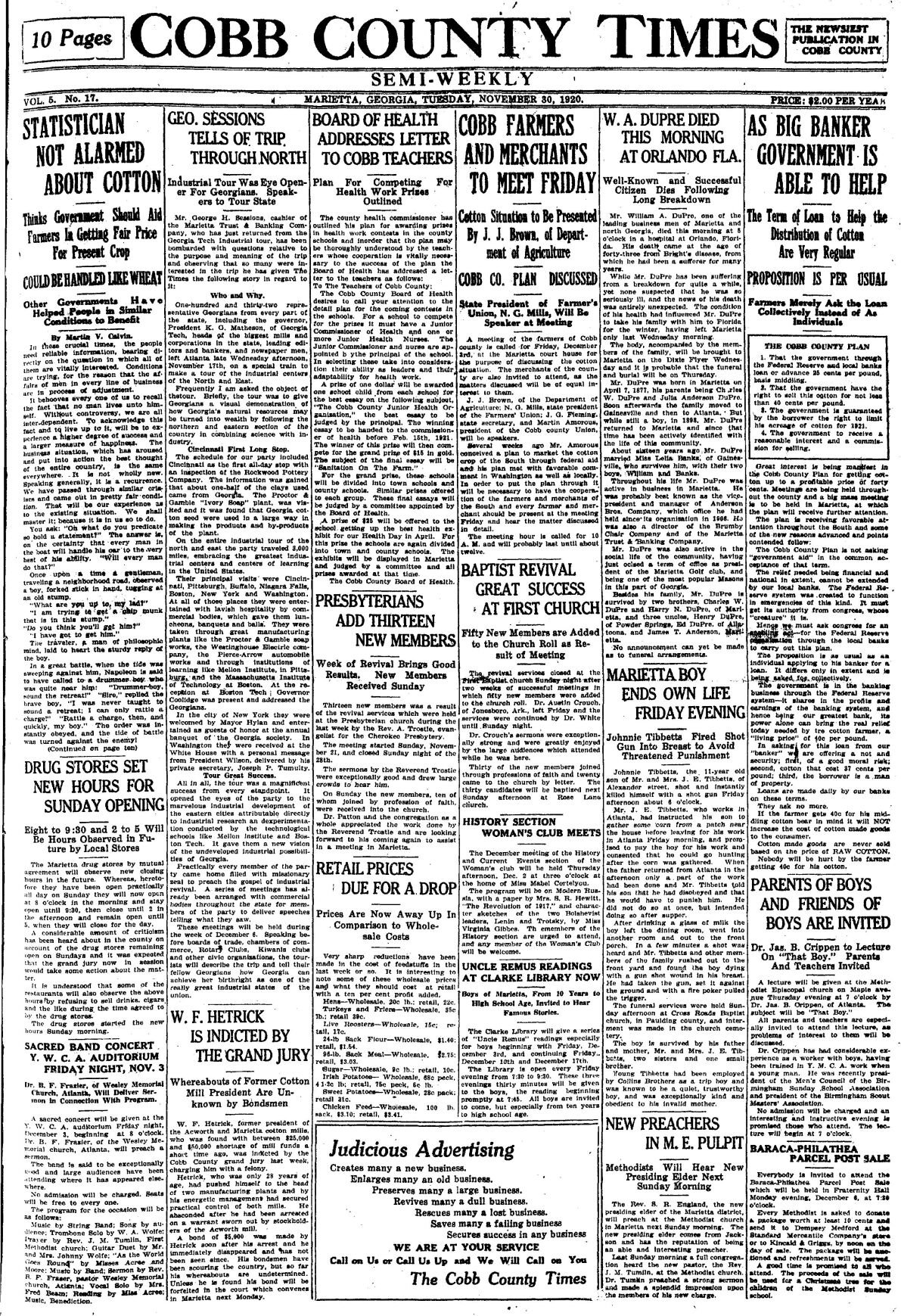 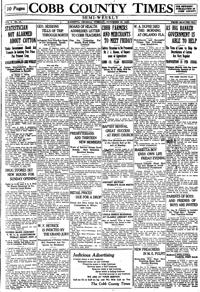 The Tuesday, Nov. 30, 1920, edition of The Cobb County Times reported on the unexpected death of William A. DuPre, 43, one of the leading businessmen of Marietta and north Georgia. He died from Bright’s Disease, something he had suffered with for many years, in a hospital in Orlando, Florida.

DuPre was best known as the vice president and manager of Anderson Bros. Company, an office he held since its organization in 1906. He was also a director of the Brumby Chair Company and the Marietta Trust & Banking Company. He was a recent president of the Marietta Golf Club and “one of the most popular Masons in this part of Georgia.”

The Friday, Dec. 3, 1920, edition of The Cobb County Times reported in the “News From Our Correspondents” column the following items:

♦In the Lost Mountain section, the telephone exchange was moved the week before from Nannie Kemp’s home to a house on Mrs. Lon Jackson’s place.

♦In the Due West section, burglars broke into the store of A.G. Cantrell and “took away all they could carry.”

♦In the Willeo section, Mr. Venerable was reported as having his finger amputated a few days earlier after cutting it while pulling fodder. A serious infection resulted in the amputation, but his hand was still not healing.

The Friday, Dec. 3, 1920, edition of The Marietta Journal reported in the “Current Events” column on the front page that a jury had convicted a prominent Columbus woman for shooting a child that was stealing magnolias in her yard. The jury was out for 36 hours and sentenced the woman to 1-2 years in the penitentiary.

The editors wrote on the Editorial Page that Judge Kennesaw Mountain Landis was making war very effectively against the liquor dealers in Chicago, and they were not escaping so easily as the Standard Oil Company did from his $29 million fine.

In the Monday, Dec. 3, 1945, edition of The Marietta Daily Journal, the following was reported:

♦Burglars broke into Durham Drug Company in Acworth the Saturday before, twisted a padlock from the front door and stole $35 worth of narcotics — mostly morphine and codeine.

Thirty-four Bell-built B-29 Superfortesses were reported in the Thursday, Dec. 6, 1945 paper as being on their way to the “proverbial ‘boneyard’ of the Army Air Forces.” The planes were part of a group of 87 which were moving along the assembly line in the Bell Marietta Plant when Victory in Japan Day pulled the switch that ended the war and halted production lines in America’s war plants. The 87 were in various stages of completion, ranging from fabrication to final assembly. Fifty-three of the planes were so close to completion, Army Air Forces officials decided it would be more practical and economical to finish and store them despite an already existing surplus, than to disassemble them for salvage and scrap.

The Tuesday, Dec. 1, 1970, paper reported that cars were backed up for miles during rush hour that morning as I-75 traffic was rerouted to bypass a truck loaded with 32,000 gallons of highly flammable butane gas that overturned near Barnes Mill Road after smashing through a guardrail 10 hours earlier.