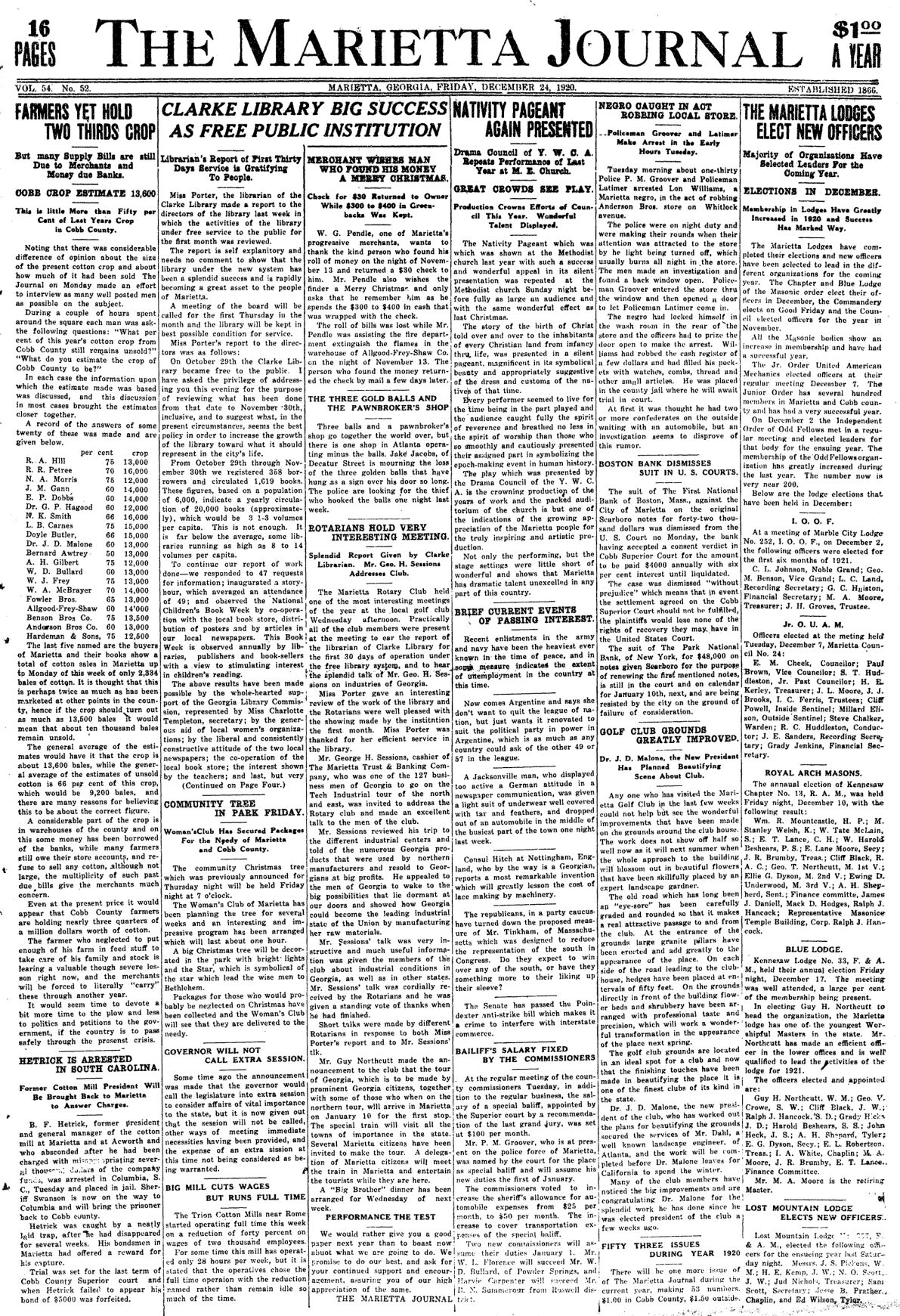 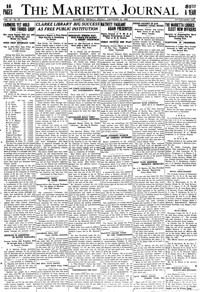 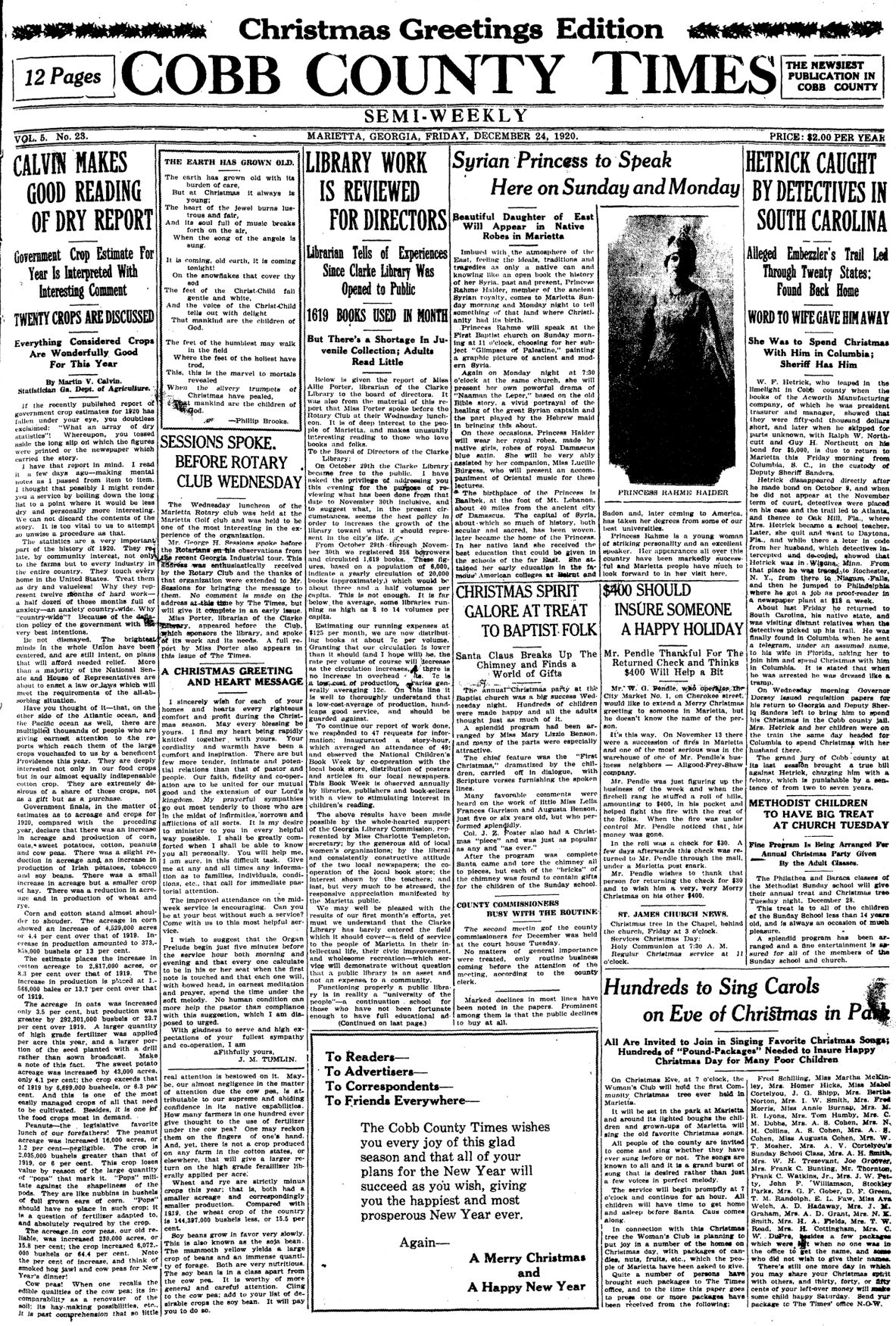 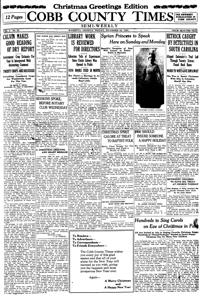 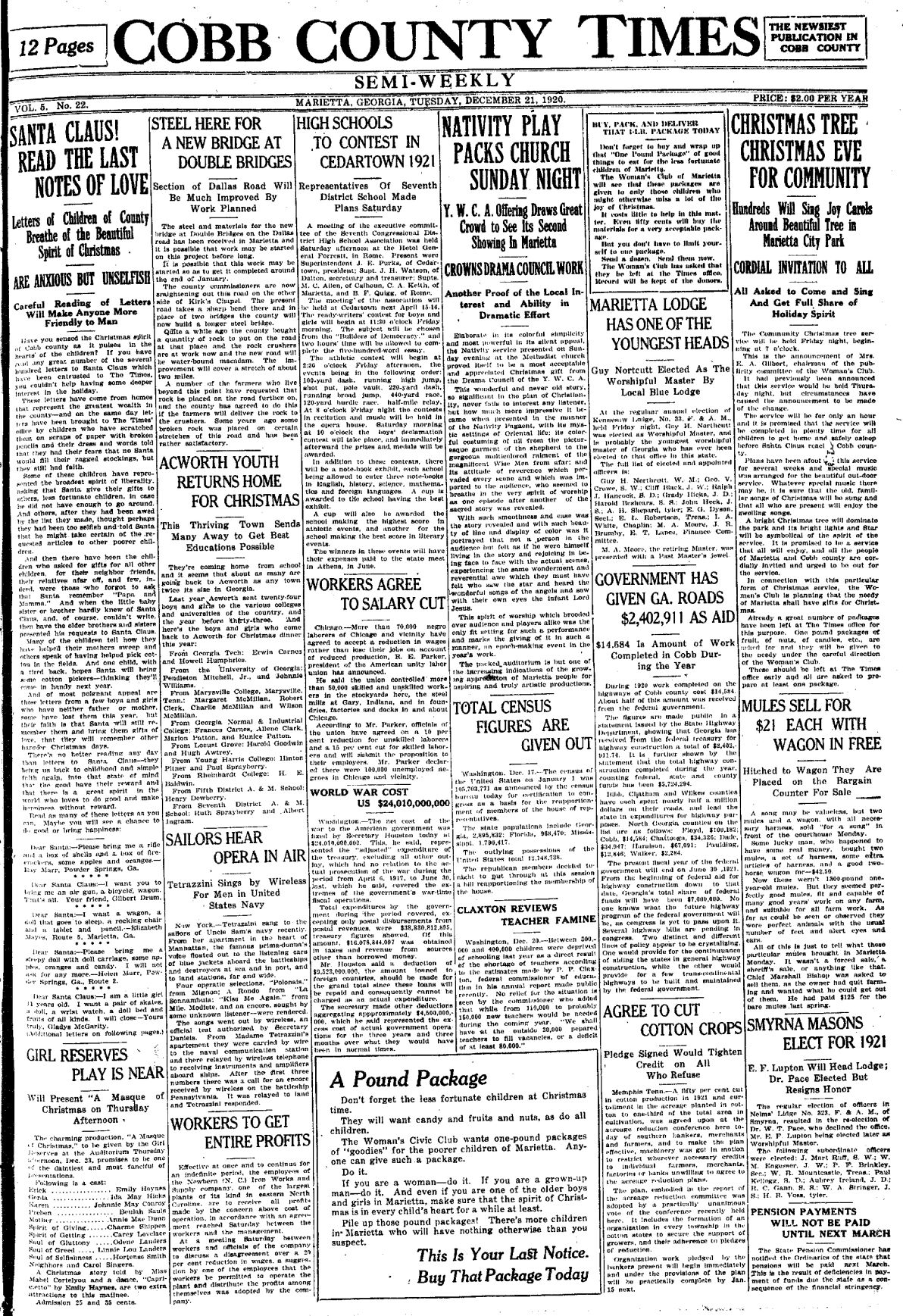 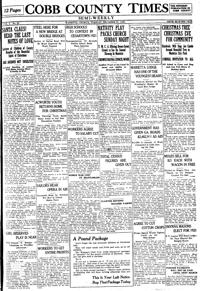 The Friday, Dec. 24, 1920, edition of The Cobb County Times reported that W.F. Hetrick was due to return to Marietta that morning from Columbia, South Carolina in the custody of Deputy Sheriff Sanders. Hetrick was president, treasurer and manager of the Acworth Manufacturing Company. When the books showed a $50,000 shortage, he skipped town after making bond on Oct. 9, 1920.

Hetrick was tracked to Oak Hill, Flordia, where his wife had become a school teacher. Later, she quit and went to Daytona, Florida, and while there a coded letter from Hetrick was intercepted and showed that he was in Winona, Minnesota. From there he was traced to Rochester, New York, then to Niagara Falls before he jumped to Philadelphia where he worked as a proof-reader in a newspaper plant for $18 a week.

The Friday before, Hetrick returned to his native South Carolina to visit relatives and was caught after sending a telegram under an assumed name to his wife in Florida, asking her to join him for Christmas in Columbia. When he was arrested, Hetrick was dressed like a tramp.

In the “News From Our Correspondents” column, the Due West section reported that H.F. Hamilton was thrown from a mule and broke his shoulder the Wednesday before.

The Friday, Dec. 31, 1920, edition of The Marietta Journal reported that about 1:30 a.m. the Tuesday before, police officers P.M. Groover and Latimer arrested a man in the act of robbing the Anderson Brothers store on Whitlock Avenue. The men were on night duty rounds and became alerted when the light that usually burns all night in the store went out.

Investigating, they found a back window open. Groover entered through the window and let Latimer in through a door. The robber locked himself in the washroom near the rear of the store and the officers had to pry open the door to make the arrest. The robber had taken a few dollars from the cash register and stuffed his pockets with watches, combs, thread and other small articles.

W.G. Pendle, one of Marietta’s merchants, was reported as thanking the person who found his roll of money on Nov. 13, 1920 and returned a $30 check to him via the mail. Pendle also asked that the person remember him as they spent the $300-$400 in cash that was wrapped up with the check. Pendle lost the bills while helping the fire department extinguish the flames in the warehouse of Allgood-Frey-Shaw Co.

In the “Brief Current Events of Passing Interest” column, “a Jacksonville man, who displayed too active a German attitude in a newspaper communication,” was reported as being given “a light suit of underwear well covered with tar and feathers, and dropped out of an automobile in the middle of the busiest part of town one night last week.”

In the Tuesday, Jan. 1, 1946, edition of The Marietta Daily Journal it was reported that actual construction and ground clearing work on the $17.4 million Allatoona dam was to get underway by spring. The dam near Cartersville was to provide more than 20 miles of lake frontage in Cobb County. Signing of the deficiency appropriation bill by President Harry S. Truman cleared the way for the Mobile District Army Engineers office to advertise for bids by contractors. The 184-feet high concrete gravity type dam would regulate flood waters from the Etowah River above Rome, and provide 66,000-kilowatts of hydro-electric power.

In the Wednesday, Dec. 30, 1970, paper it was reported that the two men who brought a body to Cobb General Hospital were charged with murder. The men claimed they had found the body on State Road 5 about five miles south of Douglasville in Douglas County and that it was the victim of a hit-and-run. The State Crime Laboratory in Atlanta determined that the deceased man had been “badly beaten and had a fractured skull” and that “the possibility of being killed by an automobile has been ruled out.”

Also that day, it was reported that the Oct. 17, 1970 fire that destroyed C5 No. 1 was caused by an explosion in the hose of a heater being used to dry a fuel tank in the huge plane. The conclusion was released that morning by Air Force officials at the Pentagon. The Air Force report said the question of who would be held liable for the $20 million airplane’s loss had not yet been determined.