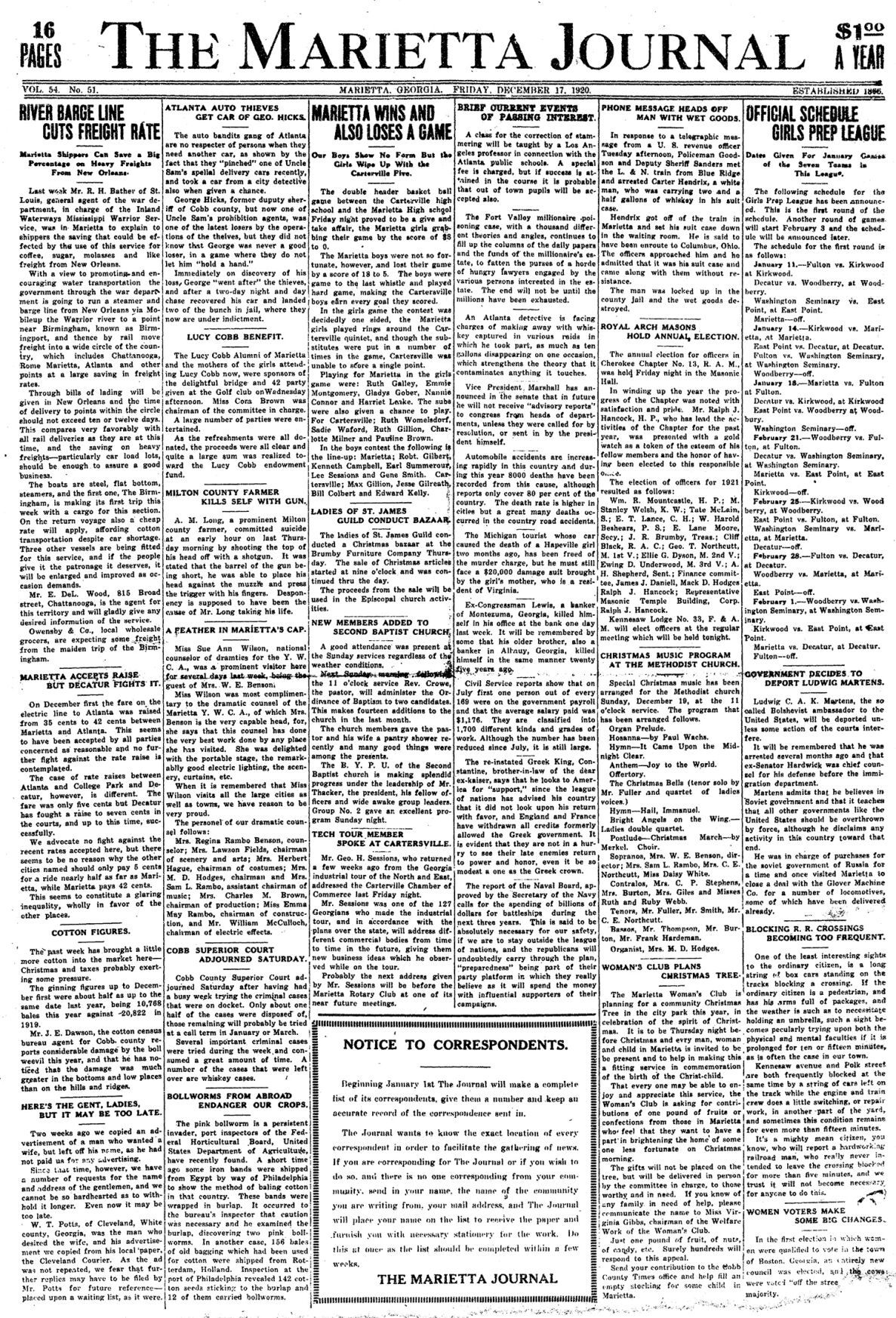 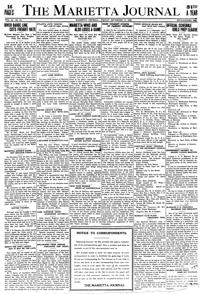 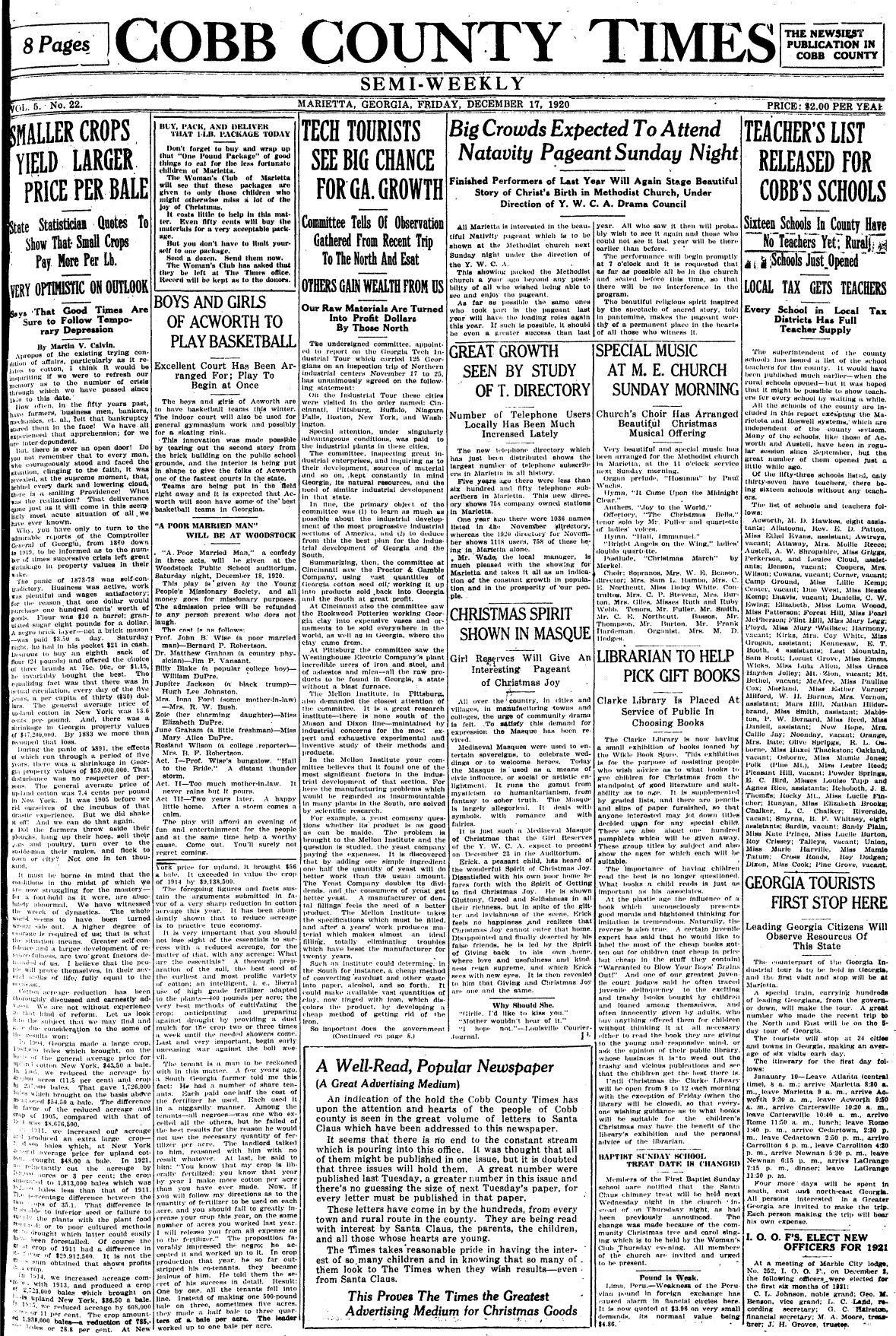 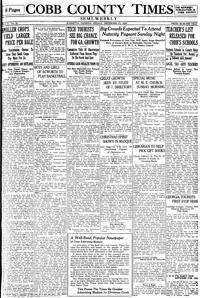 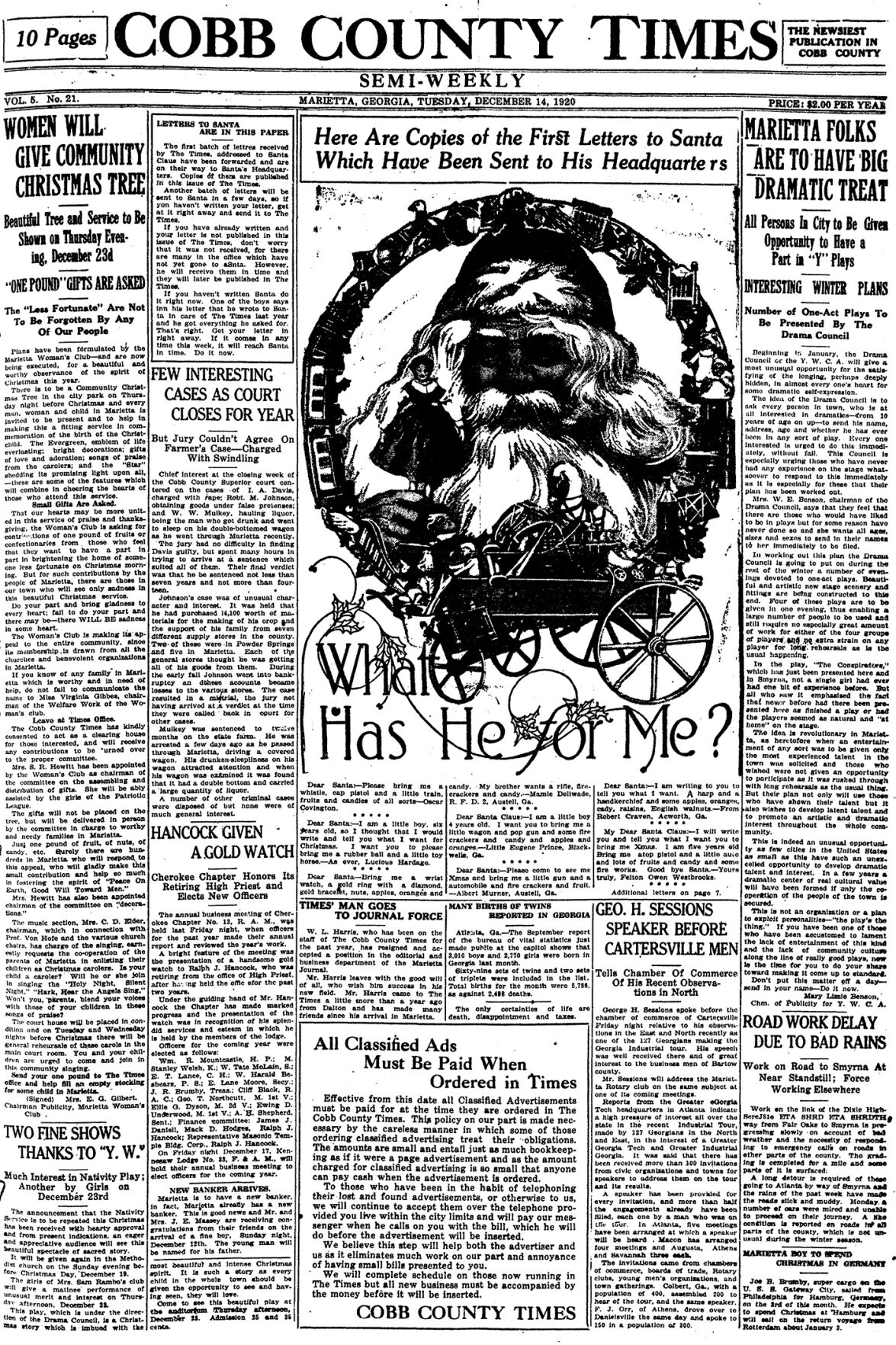 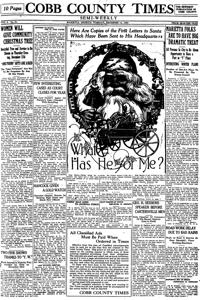 The Tuesday, Dec. 14, 1920, edition of The Cobb County Times reported that the Marietta Woman’s Club planned to have a Community Christmas Tree in Glover Park on Marietta Square the Thursday before Christmas. The Club also asked for contributions of one pound of fruits or confectionaries to help brighten the home of the less fortunate on Christmas morning.

The Friday, Dec. 17, 1920, edition of The Marietta Journal reported that in response to a U.S. revenue officer’s telegram the Tuesday before, Marietta Policeman Goodson and Deputy Sheriff Sanders met the Louisville & Nashville train from Blue Ridge and arrested Carter Hendrix, who was carrying two and a half gallons of whiskey in his suitcase.

“The auto bandits gang of Atlanta” was reported as having “pinched” one of Uncle Sam’s special delivery cars and a car belonging to an Atlanta city detective. George Hicks, former deputy sheriff of Cobb County and one of the government’s Prohibition agents, had his car stolen. In response, Hicks went after the thieves in a two-day chase, recovered his car and put two of the gang in jail.

In the “Brief Current Events Of Passing Interest” column, an Atlanta detective was reported as facing charges of taking whiskey captured during various raids. As much as 10 gallons were reported as disappearing on one occasion.

The editors wrote the following on the Editorial Page:

“The reason whiskey profiteers fear no punishment is that most of the officers would rather handle the whiskey than the profiteers.”

In the “Personal Mention” column, Society Editor by Mrs. D.C. Cole wrote that Mr. and Mrs. M.L. McNeel left the Sunday before for a 10-day trip to Detroit and Chicago. While in Detroit, McNeel was to attend a national meeting of Dort Motor Company distributors.

The Dort Motor Car Company, based in Flint, Michigan, built cars from 1915–1924. The company grew out of the Durant-Dort Carriage Company, which was founded in 1886 by William C. Durant and J. Dallas Dort.

In the Monday, Dec. 17, 1945, edition of The Marietta Daily Journal it was reported that two Cobb County deputies discovered and destroyed a 2,000-gallon capacity liquor still and 2,000-gallons of mash. The still described by Deputy Marshal Bryan as a “ground hog” was found in the northwestern part of Cobb near the Paulding county line.

The granite relief begun 29 years earlier on the face of Stone Mountain in memory of the valor of the Confederacy was reported in the Tuesday, Dec. 18, 1945, paper as resuming soon. Atlanta sculptor Maj. Julian F. Harris, who began the project returned home after three years of service at Army-Air Force bases in the China-Burma-India theater.

Hertis Lee Stephens, 27, one of the 14 fugitives that escaped from the Cobb County prison farm on Dec. 9, 1945, was reported in the Wednesday, Dec. 19, 1945, paper as being arrested by FBI agents in Montgomery, Alabama. He was charged with car thefts in Alabama and Georgia. His recapture left only four escapees still on the run. Stephens and the others gained their freedom by overpowering their guards in Cobb County while being escorted to breakfast.

In the Sunday, Dec. 13, 1970, edition of The Marietta Daily Journal it was reported that the young landlady of Joyce Padgett, who was murdered by a shotgun-wielding killer, had a “vision” of the killing three weeks before it happened. Padgett was shot to death sometime around 10 p.m. on Dec. 4, 1970, after she and her husband had closed the service station that they operated at the intersection of Dallas Highway and Villa Rica Road. Dotti Cecchini, who claimed to be clairvoyant, told the paper that she envisioned the death of Padgett the day the couple moved into one of her trailers in the Hilltop Trailer Park on Clay Drive.