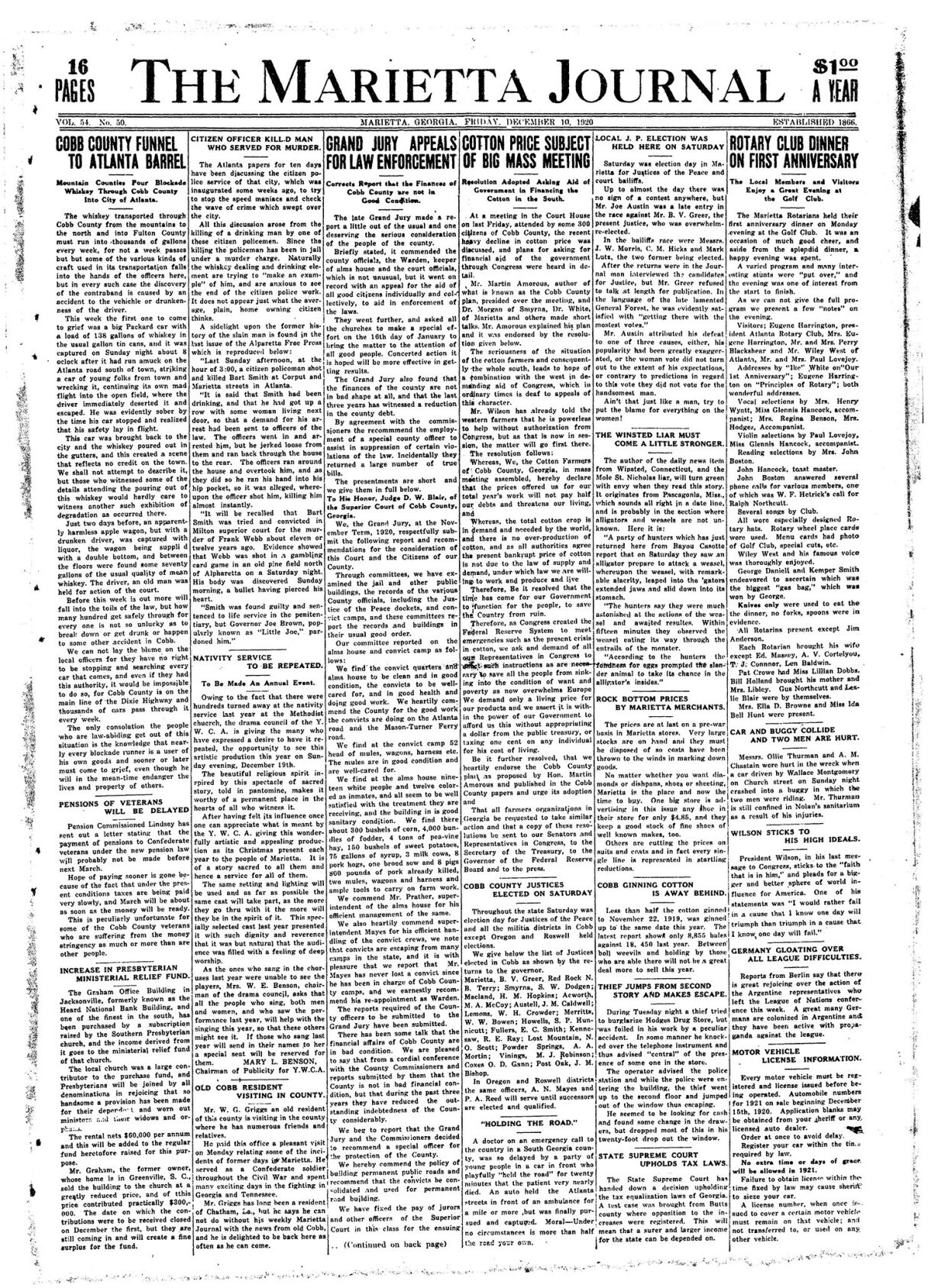 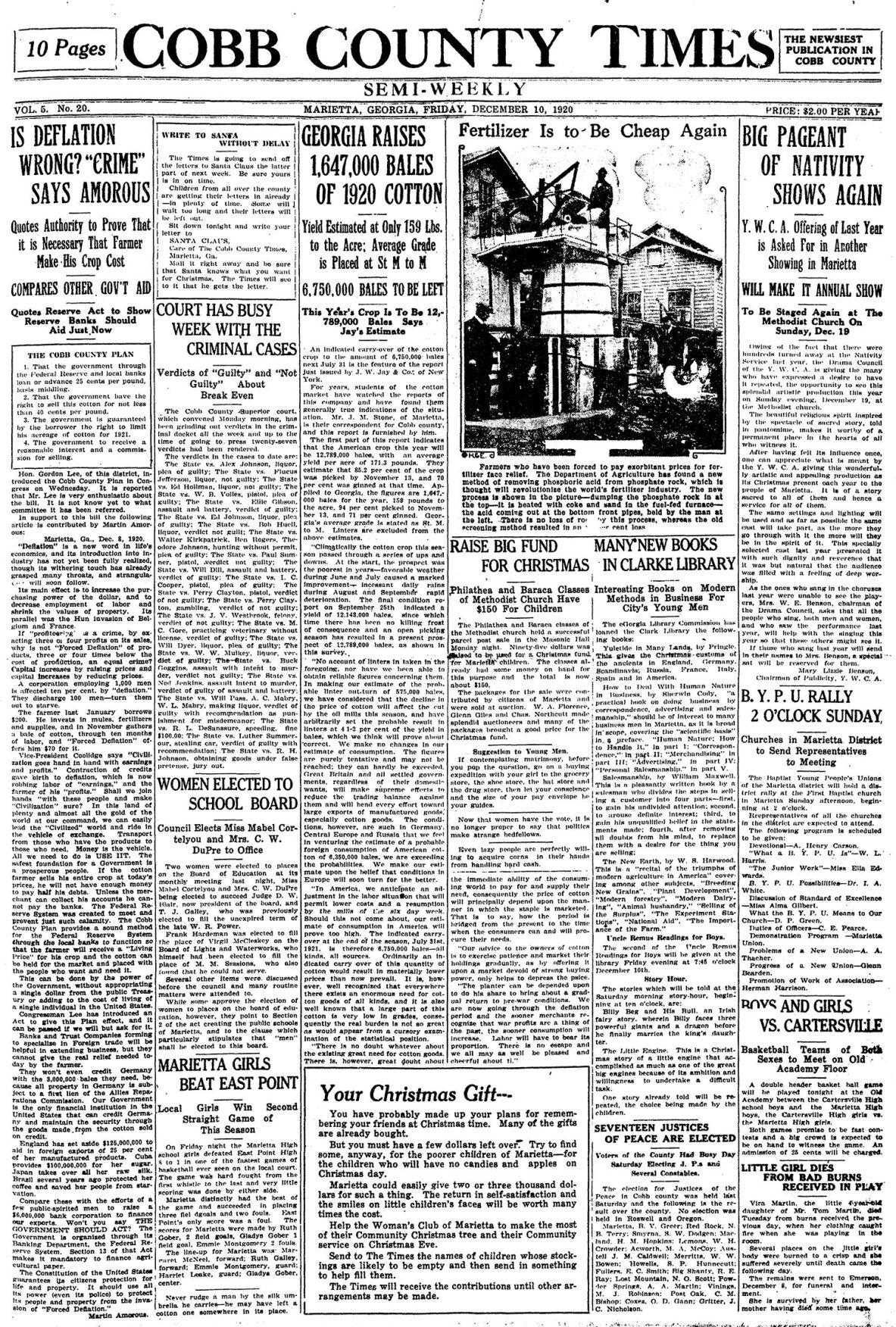 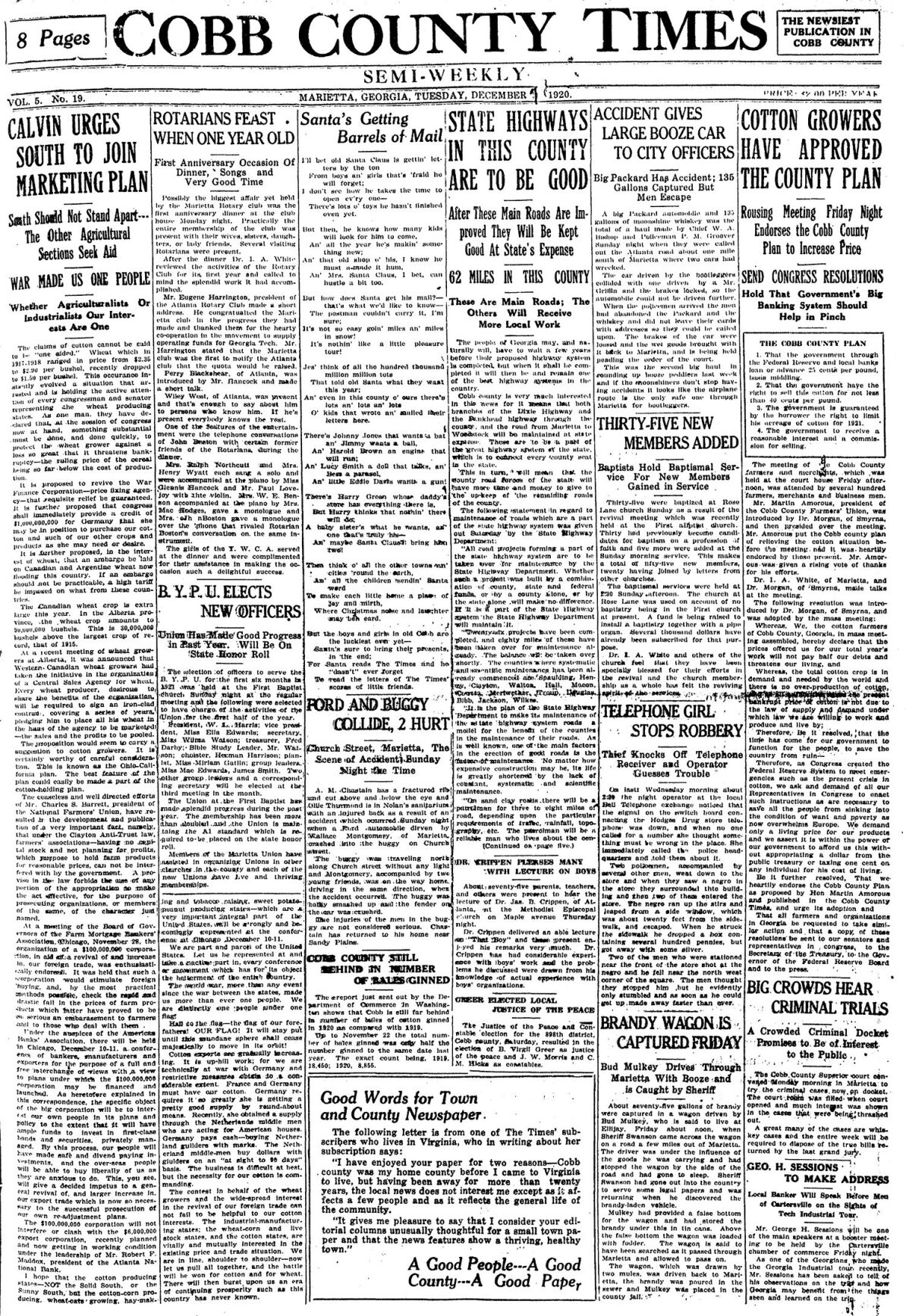 The Tuesday, Dec. 7, 1920, edition of The Cobb County Times reported that a Packard automobile and 135 gallons of moonshine whiskey were hauled in by Marietta Police Chief W.A. Bishop and Policeman P.M. Groover the Sunday night before when they were called out to a two-car wreck on Atlanta Road.

The bootleggers’ car collided with another and the brakes locked, preventing it from being driven any further. When the police arrived on the scene, the men had abandoned the Packard and the whiskey.

This was the second large booze haul in a week.

Sheriff Swanson, while serving some legal papers, discovered the Friday before a two mule-drawn wagon with a false bottom covered in fodder that held 75 gallons of brandy. The wagon driver was found asleep and under the influence by the side of the road a few miles out of Marietta.

A Ford automobile driven by Wallace Montgomery of Marietta was reported as crashing into a buggy on Church Street. Injured in the accident was A.M. Chastain, who suffered a fractured rib and cuts above and below an eye, and Ollie Thurmond was in Nolan’s sanitarium with an injured back. The buggy was badly smashed and the fender of the car was crushed.

The Friday, Dec. 10, 1920, edition of The Cobb County Times reported on the death of four-year-old Vira Martin, daughter of Tom Martin, the Tuesday before. Vira died of burns she received when her clothing caught fire in the room where she was playing. The article stated that the little girl’s body was “burned to a crisp” in several places and that “she suffered severely until death came.”

The Friday, Dec. 10, 1920, edition of The Marietta Journal reported the Marietta Rotarians held their first anniversary dinner the Monday before at the Golf Club. There were addresses made by “Ike” White on “Our 1st Anniversary” and Eugene Harrington on “Principles of Rotary.”

The article also said that “George Daniell and Kemper Smith endeavored to ascertain which was the biggest ‘gas bag,’ which was won by George.” Another interesting detail was that only knives were used to eat the dinner.

The front page also carried a story about the shooting death of Bart Smith by a citizen policeman at Corput and Marietta streets in the City of Atlanta.

Smith, who had been drinking, had gotten into a fight with a woman living next door. Officers arrived to arrest him, but he jerked away and ran back into the house. The officers ran around the house and overtook him. It was alleged that Smith reached into his hip pocket, which made the officer fire his weapon, killing the man almost instantly.

The citizen police service was created weeks earlier by Atlanta as an attempt to stop speeding maniacs and the crime wave that had swept over the city. “The whiskey dealing and drinking element” were reported as using the officer as an example as to why the city should end the citizen police force.

A thief was reported as trying to burglarize Hodges Drug Store the Tuesday before, but was foiled when he knocked over the telephone and the operator alerted police to someone being in the store. The thief managed to find some change in the drawers, but lost most of it when he jumped out the second floor window as officers entered the building.

Another story reported that professional burglars entered the Fairburn Post Office the Thursday morning before and blew the door off the big safe, but something frightened them off before its contents could be pilfered.

In the Tuesday, Dec. 11, 1945, Marietta Daily Journal, it was reported that eight of 14 prisoners who escaped from the prison farm the Sunday before were still at large.

One trio of the prisoners held up Clarence Moore, a Bell Telephone employee, and took his truck. They were recaptured later as they attempted to cross the Chattahoochee River on Highway 41. Another trio were captured near the prison camp with the aid of Fulton County bloodhounds.

B.H. Bishop, M.B. Poss and Harke Gibson, the three guards who were overpowered while leading the prisoners to breakfast, were not hurt. Bishop, who was overtaken in the dining room, had $55 taken from his wallet.

The following day, one of the prisoners was recaptured in Birmingham, Alabama. The fugitive said that he left one of the escapees in Mobile, Alabama and the other six in Atlanta.