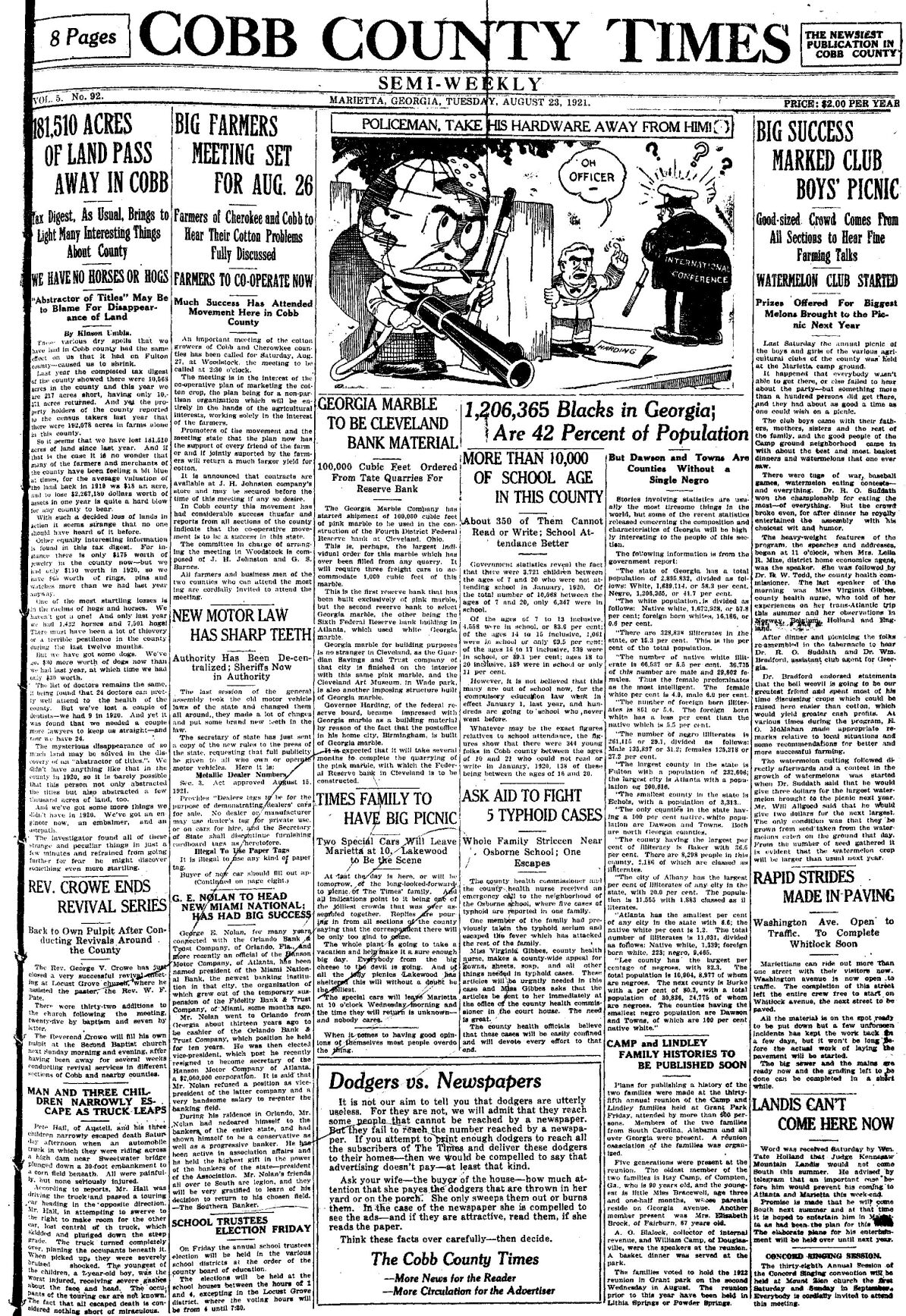 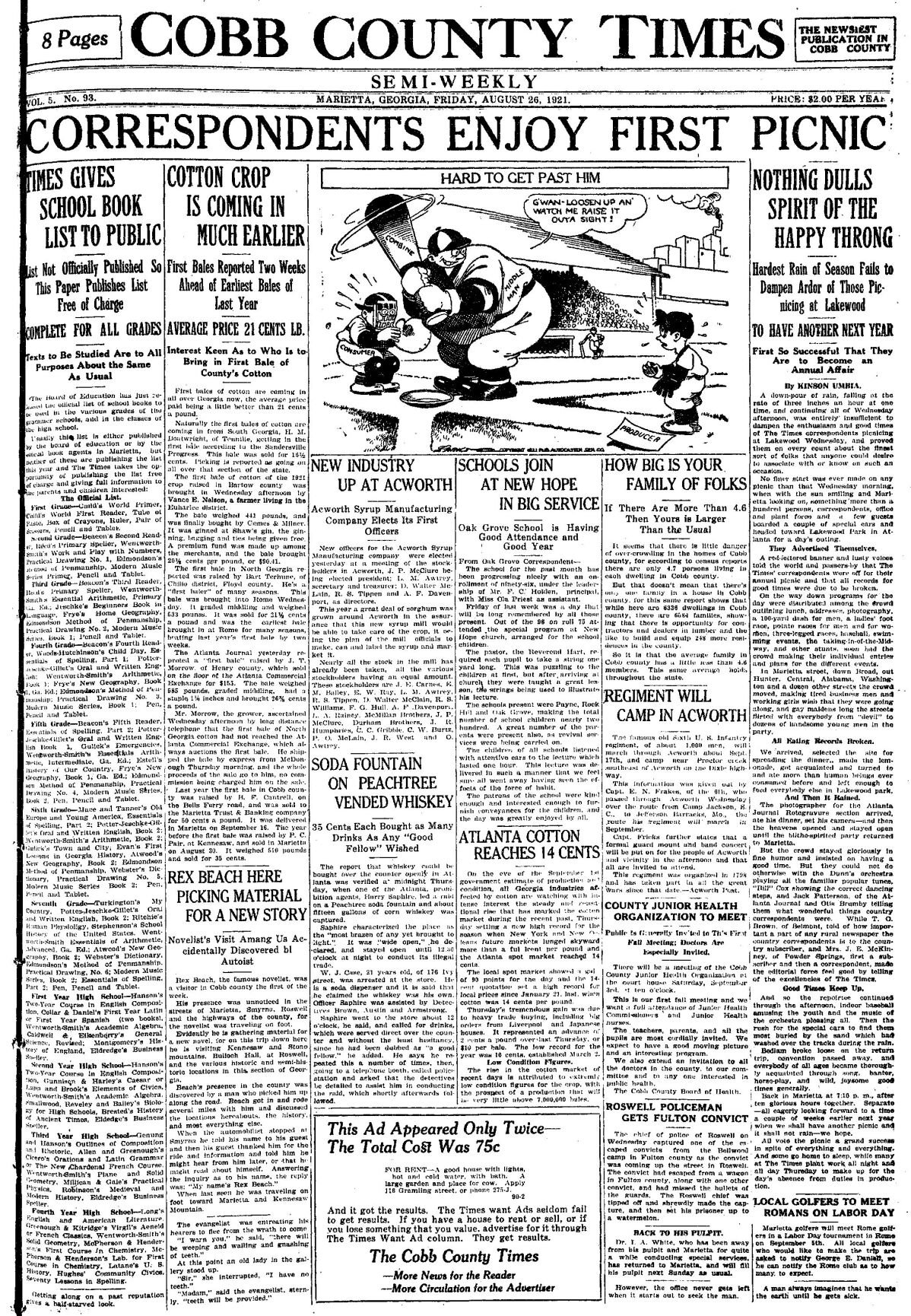 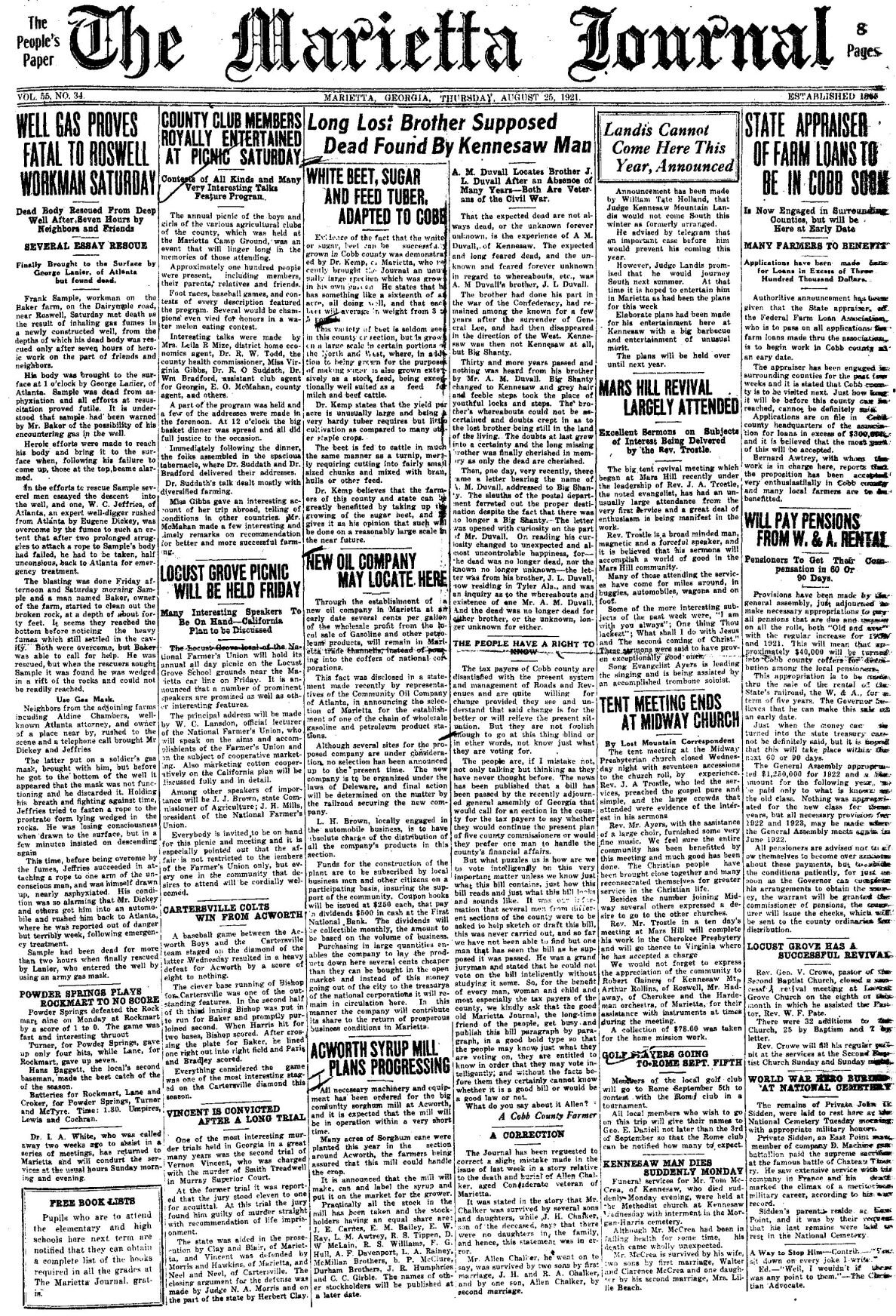 The Tuesday, Aug. 23, 1921, edition of The Cobb County Times reported that Pete Hall of Austell and his three children narrowly escaped death the Saturday before when their truck crossed a high dam near the Sweetwater Bridge and plunged down a 30-foot embankment into a corn field.

The accident happened when Hall lost control trying to make room for a touring car that was coming from the opposite direction. The truck turned completely over and pinned all of the occupants underneath.

The youngest of Hall’s children, a seven-year-old boy, was the worst injured. He suffered severe gashes about his face and head.

The county health commissioner and the county health nurse were reported as receiving an emergency call to the Osborne School neighborhood where five cases of typhoid fever had struck one family. One of the family members had previously taken the typhoid serum and was the only one to escape the disease that had attacked the rest of the family.

“The correspondents, the editor, the devil, the pressmen, the printers, the Linotype operators, and all the rest of us are off to the First Annual Times’ Correspondents’ Picnic at Lakewood (the following day), and if you don’t get any paper on Friday you’ll know that we had a big time.”

The Friday, Aug. 26, 1921, edition of The Cobb County Times reported that Harry Saphire, one of Atlanta’s Prohibition agents, led a raid on a soda fountain on Peachtree in Atlanta. About 15 gallons of corn whiskey were captured by him at midnight the day before.

Saphire said it was “the most brazen” of any place he had seen to date with drinks being “served direct over the counter and without the least hesitancy.” Soda dispenser W.J. Case, 21, was arrested for serving drinks at the counter for 35-cents each.

Famous novelist Rex Beach was reported as a visitor in Cobb County at the beginning of the week. The author’s presence went largely unnoticed because he was traveling on foot.

Beach was said to be gathering material for a new novel and visiting both Kennesaw and Stone mountains, Bulloch Hall at Roswell, and various historic and semi-historic locations in the county.

He was only discovered when a motorist gave him a lift for several miles. During their ride, the pair discussed the locations and history of the area. When the driver let him out in Smyrna, his guest thanked him for the ride and introduced himself.

According to Wikipedia, Beach’s adventure novels, influenced by Jack London, were popular throughout the early 1900s.

The Thursday, Aug. 25, 1921 edition of The Marietta Journal reported that Frank Sample, a workman on the Baker farm on Dairymaple Road near Roswell, died the Saturday before as the result of inhaling gas fumes in a newly constructed well. The body was rescued from the depths seven hours later through the heroic efforts of friends and neighbors.

W.C. Jeffries, an expert well-digger from Atlanta who was rushed out to aid in the rescue, also became overcome by the fumes after two prolonged struggles to attach a rope to the body failed. Jeffries had to be taken half-unconscious back to Atlanta for emergency treatment.

In the “Country Correspondents” column:

♦The Lost Mountain section reported that Rhoderie Harper, who lived on a spur off the section’s main road, decided to improve his road’s conditions.

The report said the first thing he did was remove “an unsightly rock pile” into a mud hole and cover both with soil that he plowed out of the ditches. The correspondent said that one “would quit the Dixie Highway anytime to ride on this good road.”

Rhoderie’s work also inspired Gardie Foster to fix his road in the section and planned to outdo his neighbor’s work.

On Page 3 was a legal ad seeking contractor proposals for drainage improvements in the Big Noonday Creek Drainage District No. 5 in Cobb County.

In addition to the removal of a grand total of 111,636 cubic yards of earth, the contractors were to remove any rock encountered along the way.

The editors wrote on the Editorial Page the following:

“The burning of the old Brown House in Macon with its destruction marked by a terrible toll of human life is indeed a fearful ending of a hotel where practically every prominent man in the South has registered at some time during its more than half century of serving the public.”