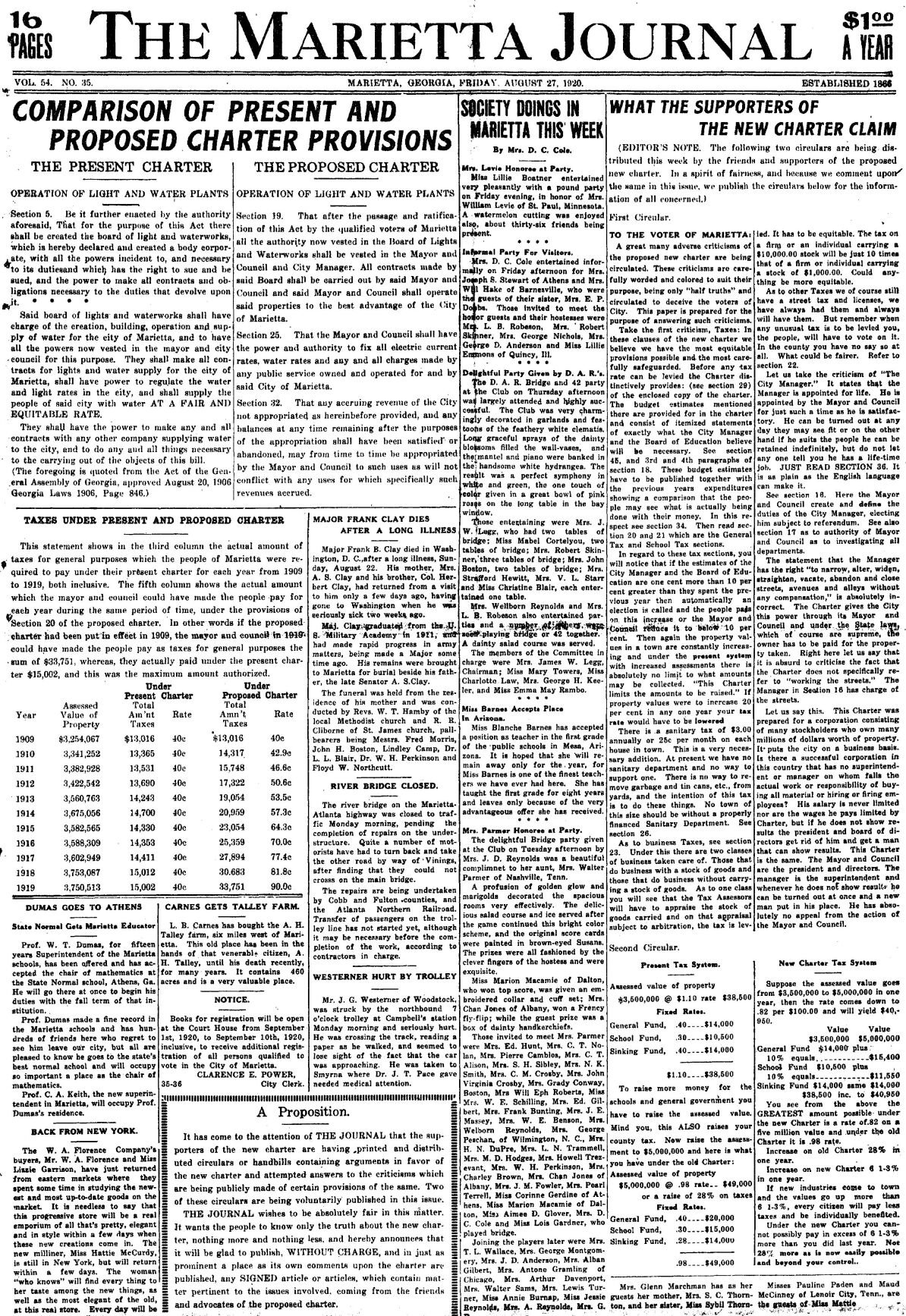 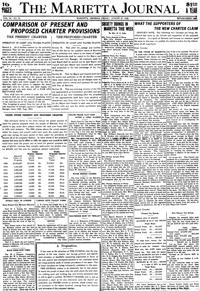 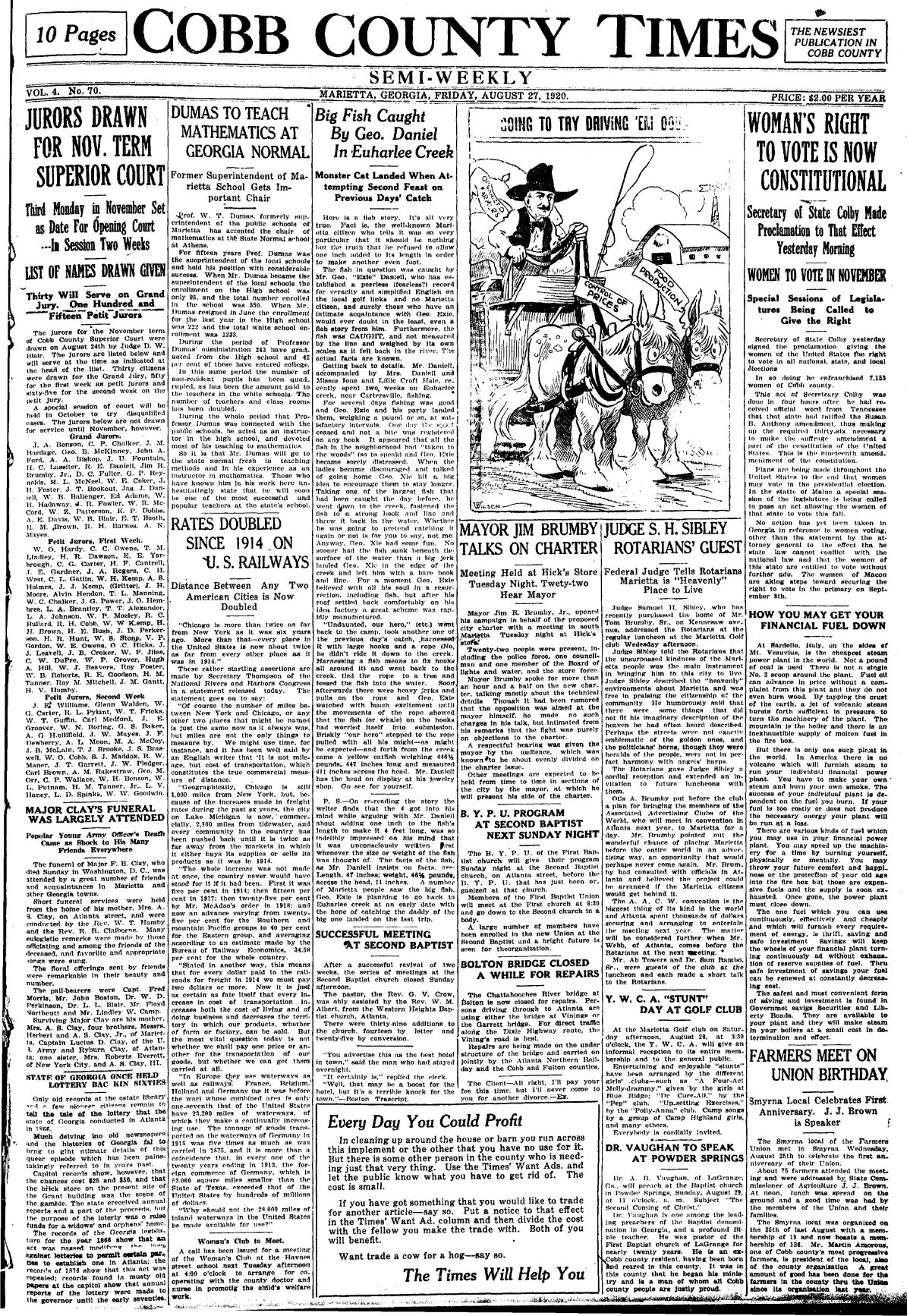 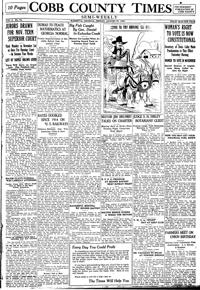 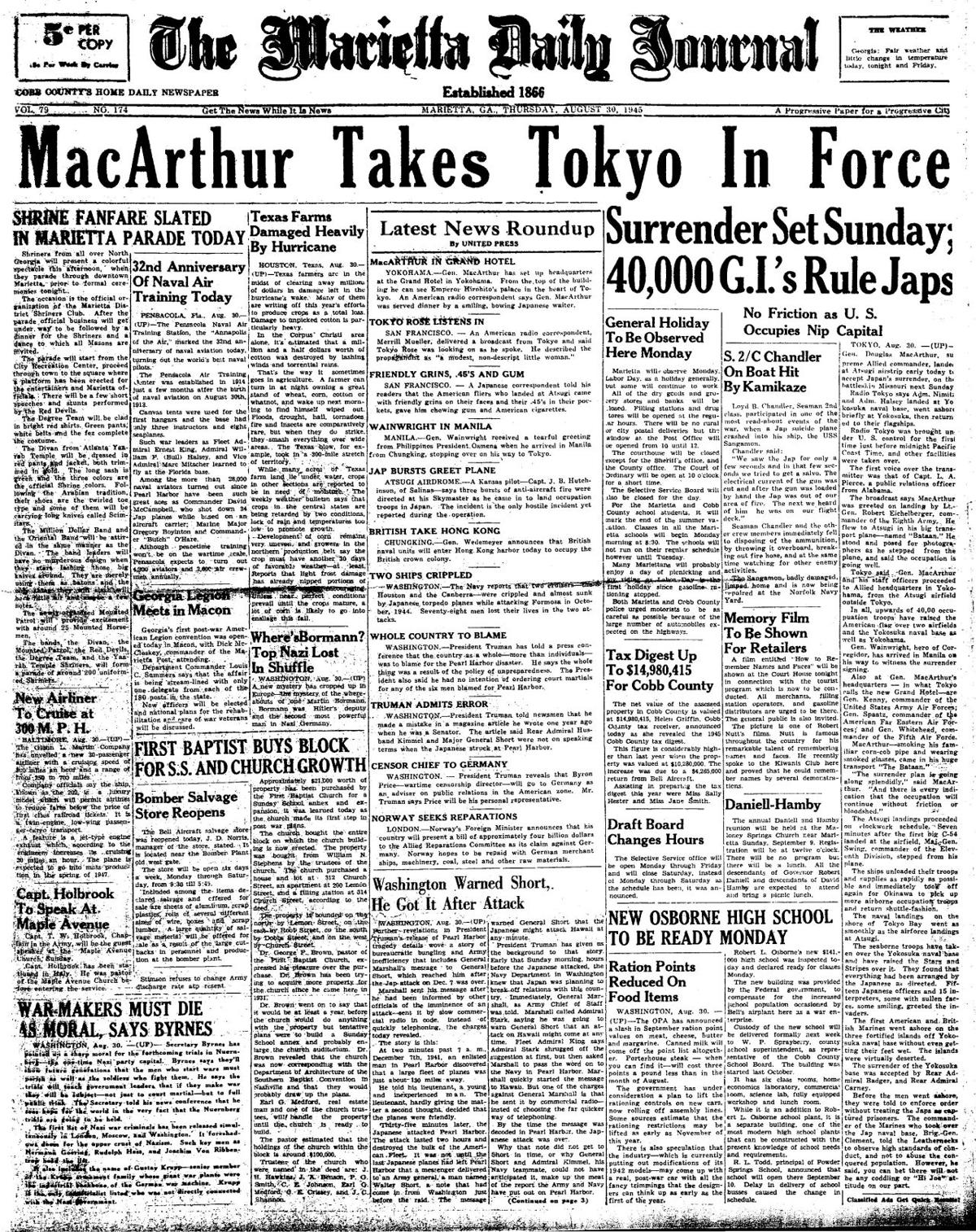 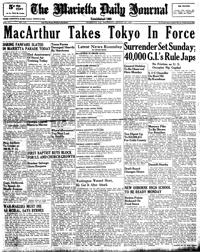 The front page of the Marietta Daily Journal from Thursday, Aug. 30, 1945. 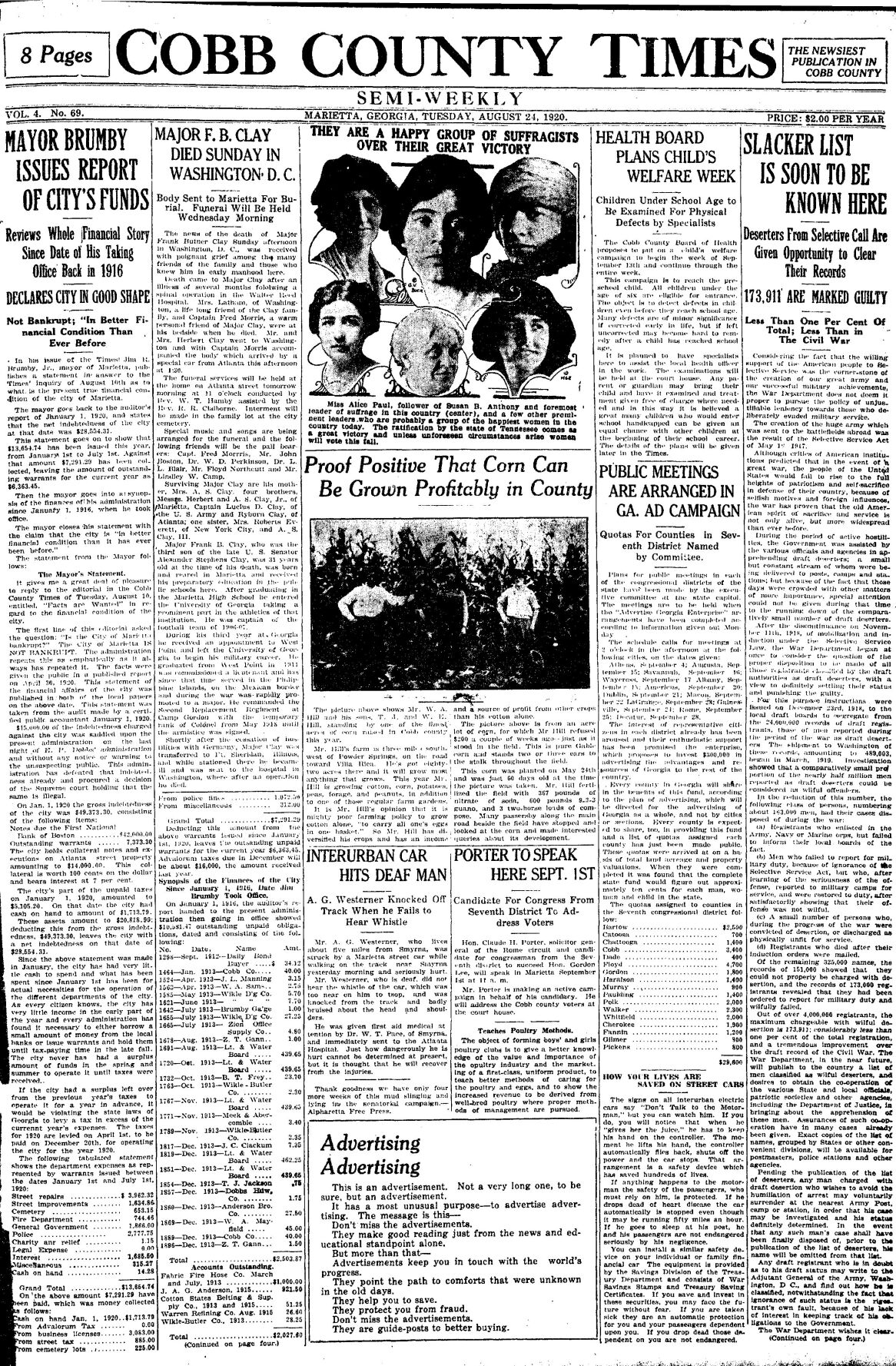 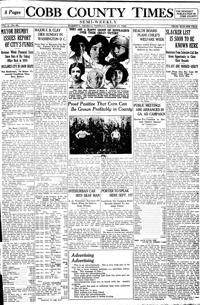 The front page of the Marietta Daily Journal from Thursday, Aug. 30, 1945.

The Tuesday, Aug. 24, 1920, edition of The Cobb County Times reported the death of Maj. Frank Butner Clay, 31, in Washington, D.C. the Sunday before. Clay died after a several months-long illness following a spinal operation at Walter Reed Hospital.

He was the third son of the late U.S. Sen. Alexander Stephens Clay. During his military career, he served in the Philippine Islands, on the Mexican border and during World War I was rapidly promoted to a major. He commanded the Second Replacement Regiment at Camp Gordon with the temporary rank of Colonel from May 1918 until the Armistice was signed.

Shortly after hostilities with Germany ended, he was transferred to Fort Sheridan in Illinois and while stationed there, became ill.

A.G. Westerner, a deaf man who lived about five miles from Smyrna, was reported as being struck and seriously injured by a Marietta street car while walking on the track near Smyrna the day before.

Westerner did not hear the whistle of the car, which was too close to him to stop. The impact knocked him from the track and badly bruised his head and shoulders.

In the “News From Our Correspondents” column, the Strickland Bridge section reported that a severe lightning and thunder storm came through that “tore up some telephone poles,” struck one house, knocked down an unidentified black woman, splintering her floor and bursting one rafter into pieces, along with burning out several telephones.

The Friday, Aug. 27, 1920, edition of The Marietta Daily Journal reported that the river bridge on the Marietta-Atlanta highway was closed the Monday before to traffic pending the completion of repairs on the under structure.

♦ George Daniell returned from a fishing trip at Euharlee, where he caught a yellow catfish weighing 46.5 pounds.

♦Professor Awtrey Wedgeworth, a history teacher in the Chicago school system, and his bride, Elizabeth Cook of Milledgeville, were visiting relatives in Acworth and Marietta the week before. Wedgeworth once taught at the Lost Mountain School in Cobb County. He went to the Philippines as a teacher for the U.S. government, rapidly advancing to superintendent of one of their larger divisions. He returned 10 years later to graduate from the University of Chicago and became a teacher at the main high school in that city.

The following items appeared in the Monday, Aug. 27, 1945, edition of The Marietta Daily Journal:

Pruett joined the Army in February 1942 and trained at Camp Stewart. He went overseas in May 1943 and served in North Africa, Sicily and Italy. He was with the 88th Division.

♦When it started raining the Friday before, three swimmers at the Country Club Lake left the waters, with two men reaching the clubhouse. The pair became alarmed when they noticed the third man wasn’t with them and assumed he had drowned.

A search party, consisting of county, city and Sheriff’s officials, were called to drag the lake and worked all night. Several times the group mistook a log for the body. Around 6:15 a.m. Saturday morning, they decided to drain the lake. At that time, one of the searchers found a man asleep on a nearby green and asked him to help in the search.

The sleeping party turned out to be the allegedly drowned man.