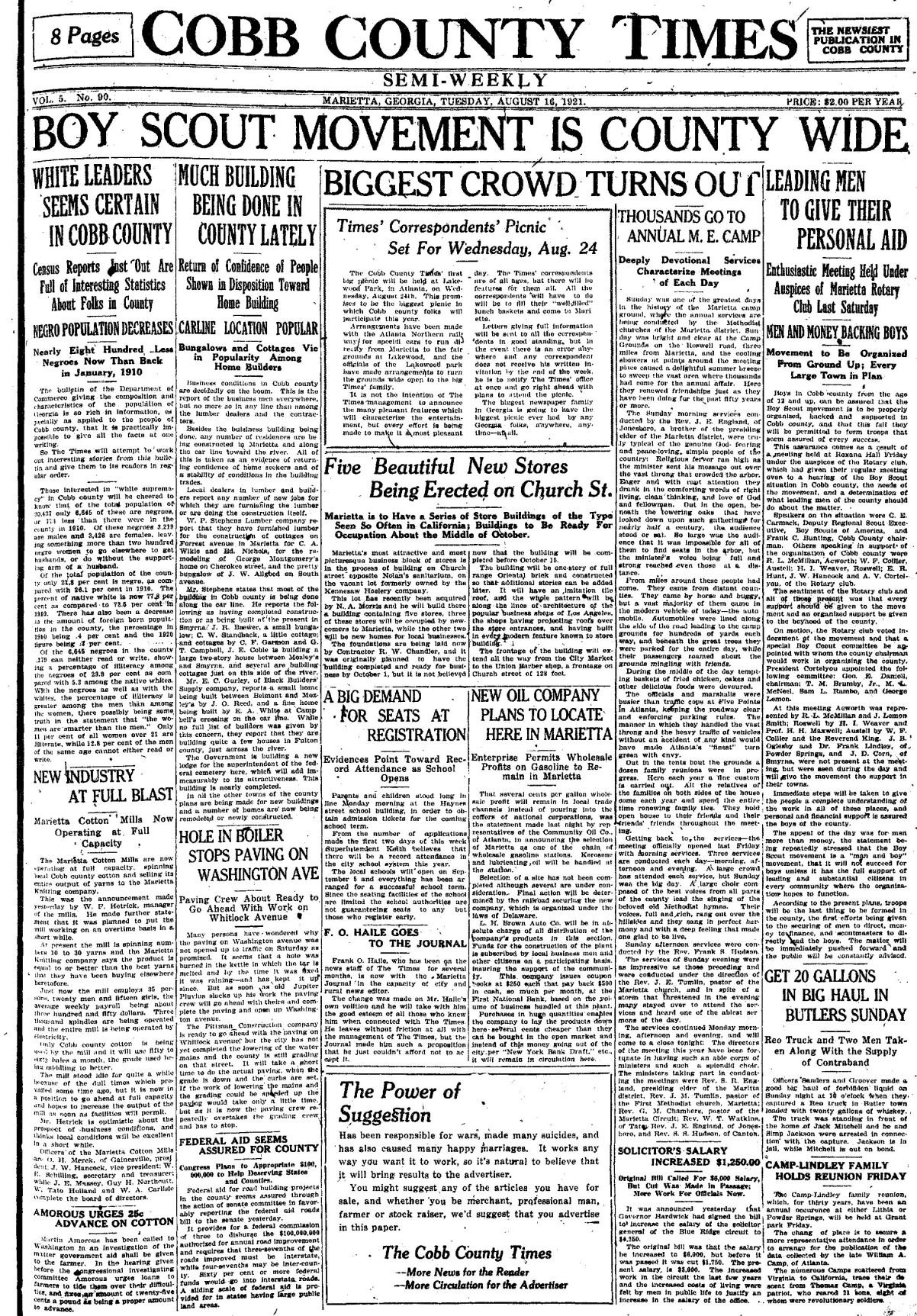 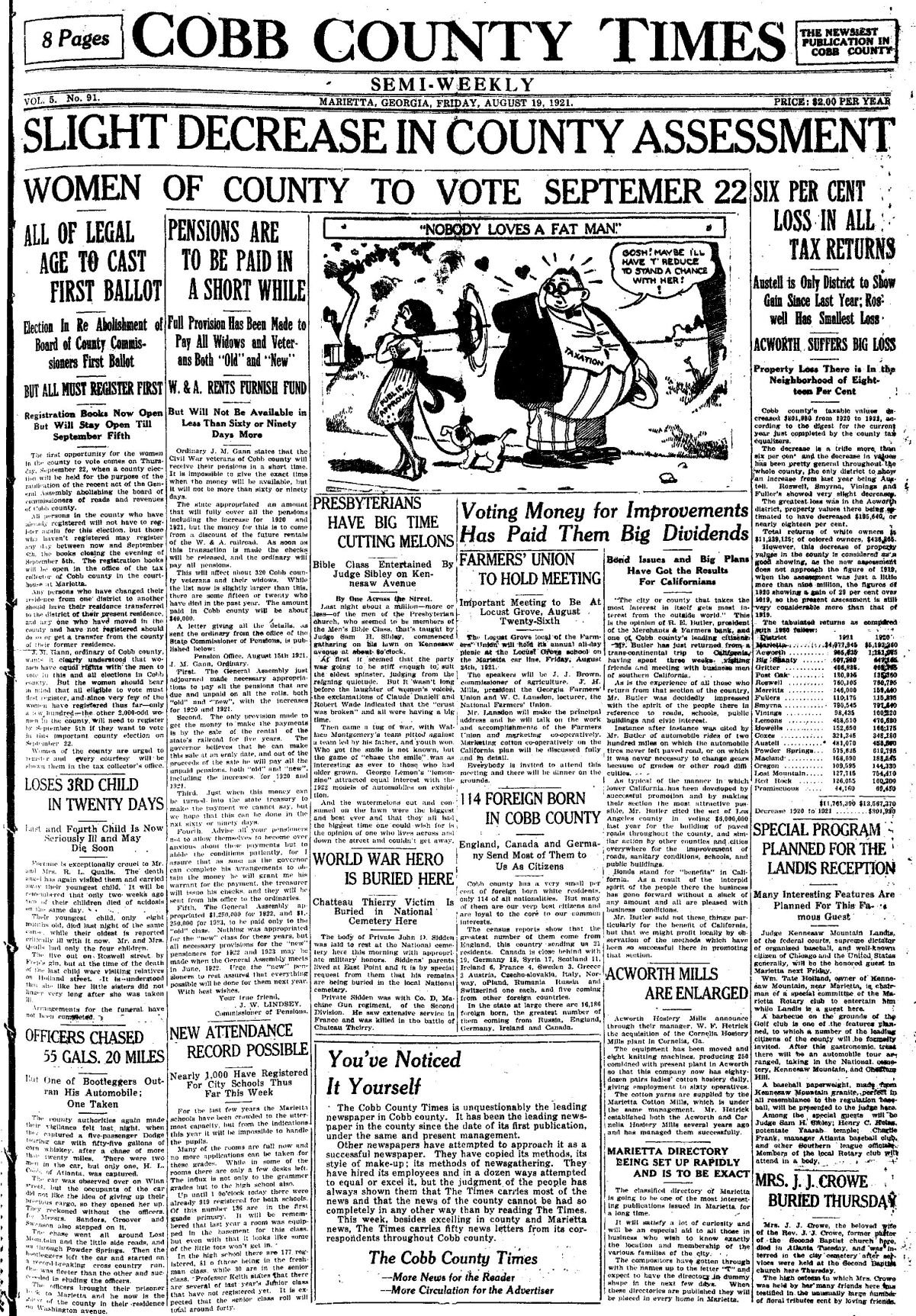 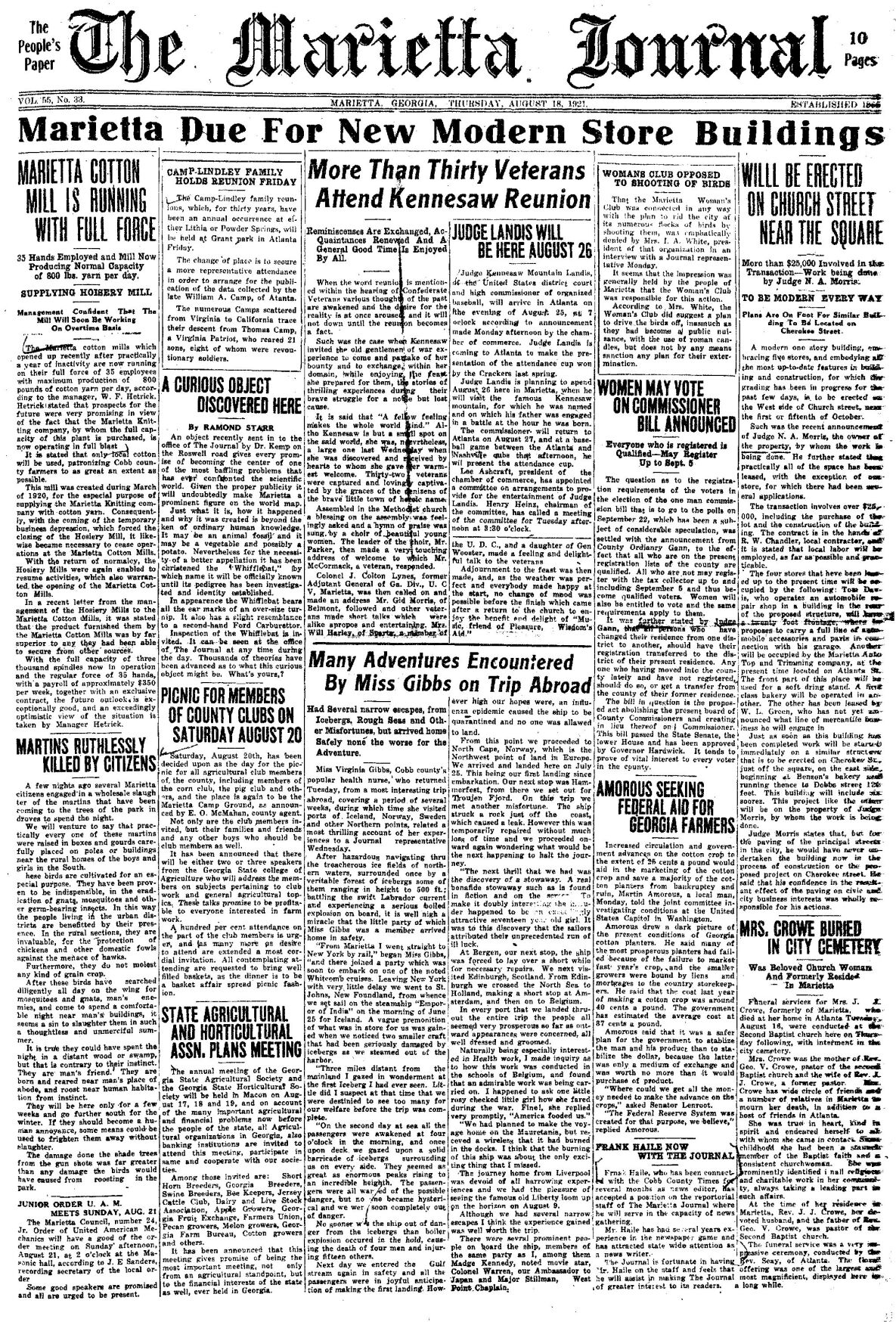 The Tuesday, Aug. 16, 1921, edition of The Cobb County Times reported on why the paving on Washington Avenue in Marietta stopped the Saturday before. The newspaper learned that “a hole was burned in the kettle in which the tar is melted” and by the time it was fixed, it had begun raining. The paving crew was ready to finish paving and open the road as soon as the rains ended. The Pittman Construction Company was also ready to begin paving Whitlock Avenue. However, the City of Marietta had yet to finish lowering the water mains and Cobb County was still working on grading the street.

Frank O. Haile, who had been on the news staff of The Times for several months, was reported as having left the paper to begin work as the city and rural news editor at The Marietta Journal.

“A good big haul of forbidden liquid” was reported as being captured in a REO truck in Butler Town. The truck, which was standing in front of the home of Jack Mitchell, had 20 gallons of whiskey in it. Mitchell and Simp Jackson were arrested in connection with the contraband.

In the “News From Our Correspondents” column, the Pine Mountain section reported that T.M. Daves had what could have been a serious runaway accident the Tuesday before on the Dixie Highway just north of Marietta. Daves’ mule became frightened by a motorcycle, broke the harness and proceeded to run, upsetting the buggy and spilling the entire contents. Half of one wheel was demolished when the buggy struck a post. Fortunately, Daves escaped uninjured.

J.B. Tanner, formerly of Acworth, and a brother of Acworth Mayor W.H. Tanner, was killed by a train at Fort McPherson the Monday before while motoring across the railroad tracks. The car was struck square in the middle and Tanner’s death was instantaneous. Mrs. Tanner was also badly injured, but was expected to recover.

The Friday, Aug. 19, 1921, edition of The Cobb County Times reported that the body of Pvt. John D. Sidden was laid to rest at the Marietta National Cemetery. A World War I veteran, Pvt. Sidden was with Co. D. Machine Gun Regiment, of the Second Division. He saw extensive service in France and was killed in the Battle of Chateau Theirry. His parents, residents of East Point, requested that his remains be buried in the cemetery.

R.L. Qualles and his wife, who the week before lost two of their daughters to acidosis on the same day, were reported as once again being struck by tragedy with the death of their youngest child — an eight month old who died the night before. The family, which lived on Roswell Street by Frey’s Gin, also reported that their oldest child was now seriously ill from acidosis — a condition causing increased acidity in the blood and other body tissues.

Cobb County authorities were reported as having captured a five-passenger Dodge touring car with 55 gallons of corn whiskey after a chase of more than 20 miles. The chase began on Winn Street in Marietta, went all around Lost Mountain and its side roads then on through Powder Springs. The bootleggers eventually decided to abandon the car and started “on a record-breaking cross country run.” One man was fleeter than the other and eluded the officers.

In the “News From Our Correspondents” column, the New Providence section reported that Lex Jolley had the misfortune of injuring his head while cranking his car the Sunday before. The crank flew out of Jolley’s hands and struck him in the forehead, cutting a wide gash that required three stitches from Dr. Bannister.

The Thursday, Aug. 18, 1921 edition of The Marietta Journal reported a story on the front page, titled “A Curious Object Discovered Here,” by Ramond Starr. An object was sent into the Journal’s offices by Dr. Kemp on Roswell Road that had the “promise of becoming the center of one of the most baffling problems that has ever confronted the scientific world.”

The object, possibly an animal fossil or a vegetable, was christened the Whifflebat until “its pedigree has been investigated and identity established.” It appeared to have “all the ear marks of an over-size turnip” and had “a slight resemblance to a second-hand Ford Carburetor.”

The Journal had placed the object on display at its offices for the public to view.

A few nights earlier, several Marietta citizens were reported as having “engaged in a wholesale slaughter of the martins” that have been coming to the trees in Glover Park in droves to spend the night. The damage done to the shade trees from the gunshots was said to be far greater than any damage the birds had caused from roosting in the park.

Virginia Gibbs, Cobb County’s popular health nurse, was reported as having returned the Tuesday before from “a most interesting trip abroad” that lasted several weeks. During her trip, Gibbs visited ports in Iceland, Norway, Sweden and other Northern points. Some of the adventures she told a Journal reporter included her ship “navigating thru the treacherous ice fields of northern waters, surrounded once by a veritable forest of icebergs some of them ranging in height of 500 ft.; battling the swift Labrador current and experiencing a serious boiler explosion on board.”

In the Friday, Aug. 13, 1971, edition of The Marietta Daily Journal it was reported that pathologists at Kennestone Hospital were conducting an autopsy on a body found lying in a pool of blood late the day before in a boarding house room on East Dixie Avenue in Marietta. An officer told the newspaper that the body had a wound on the top of the head, but it didn’t appear to be what killed him. The officer also said that some marks were found on the man’s throat.

The following day, the autopsy was completed and the 41-year-old transient was believed to have been “murdered by karate blows to the throat.”