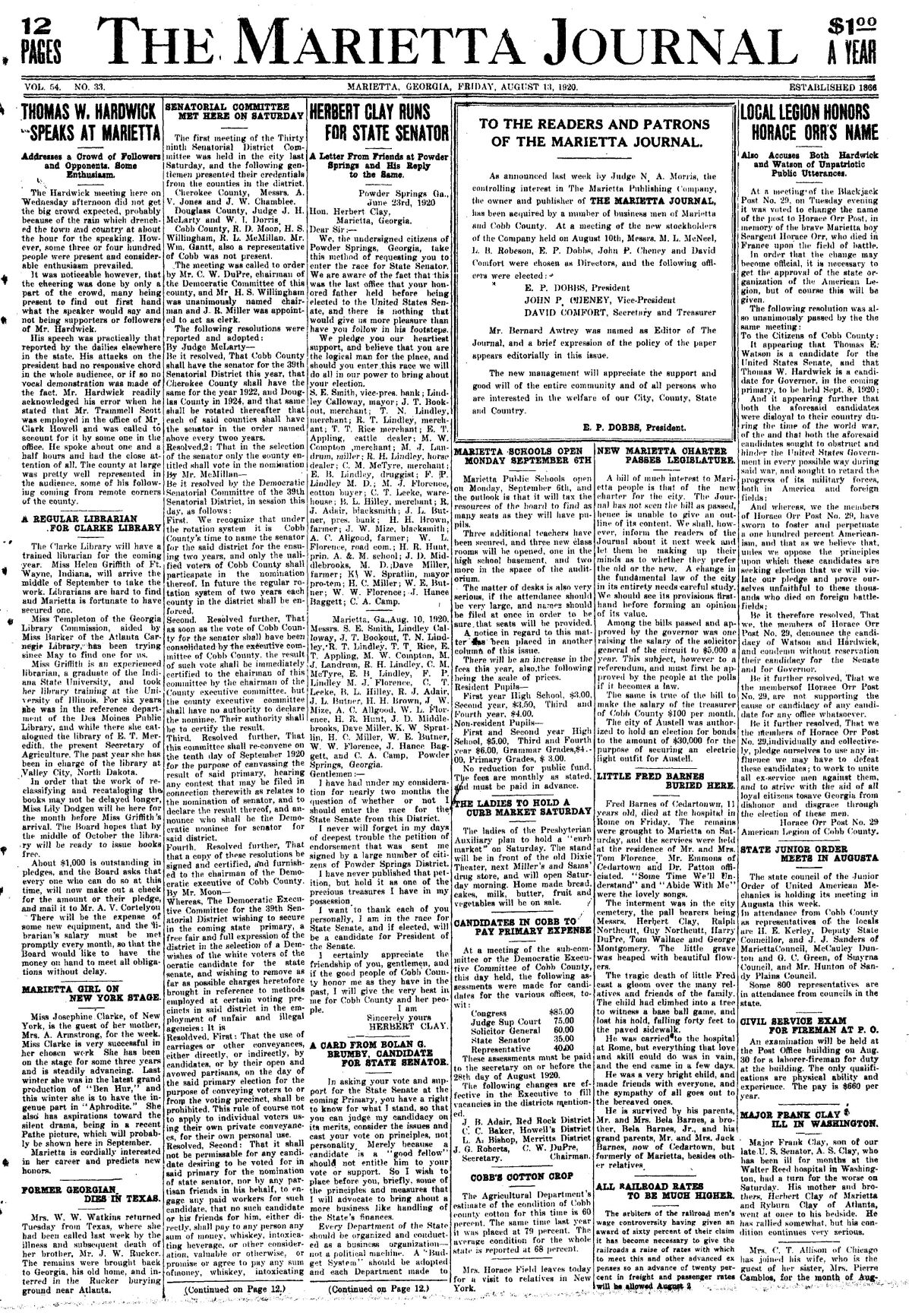 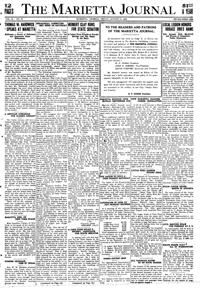 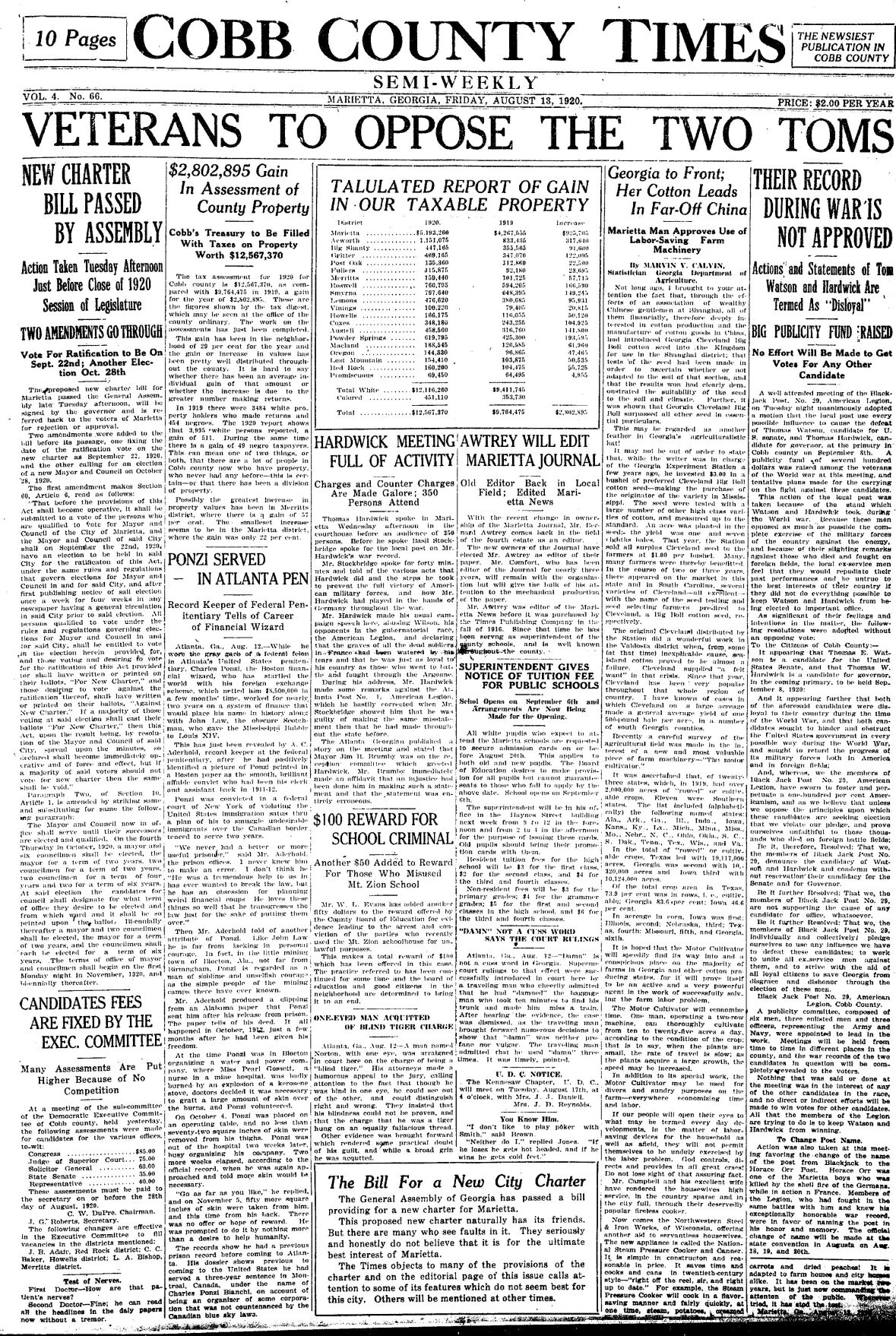 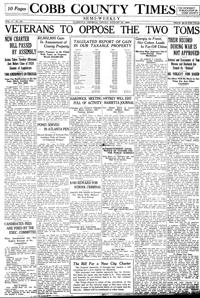 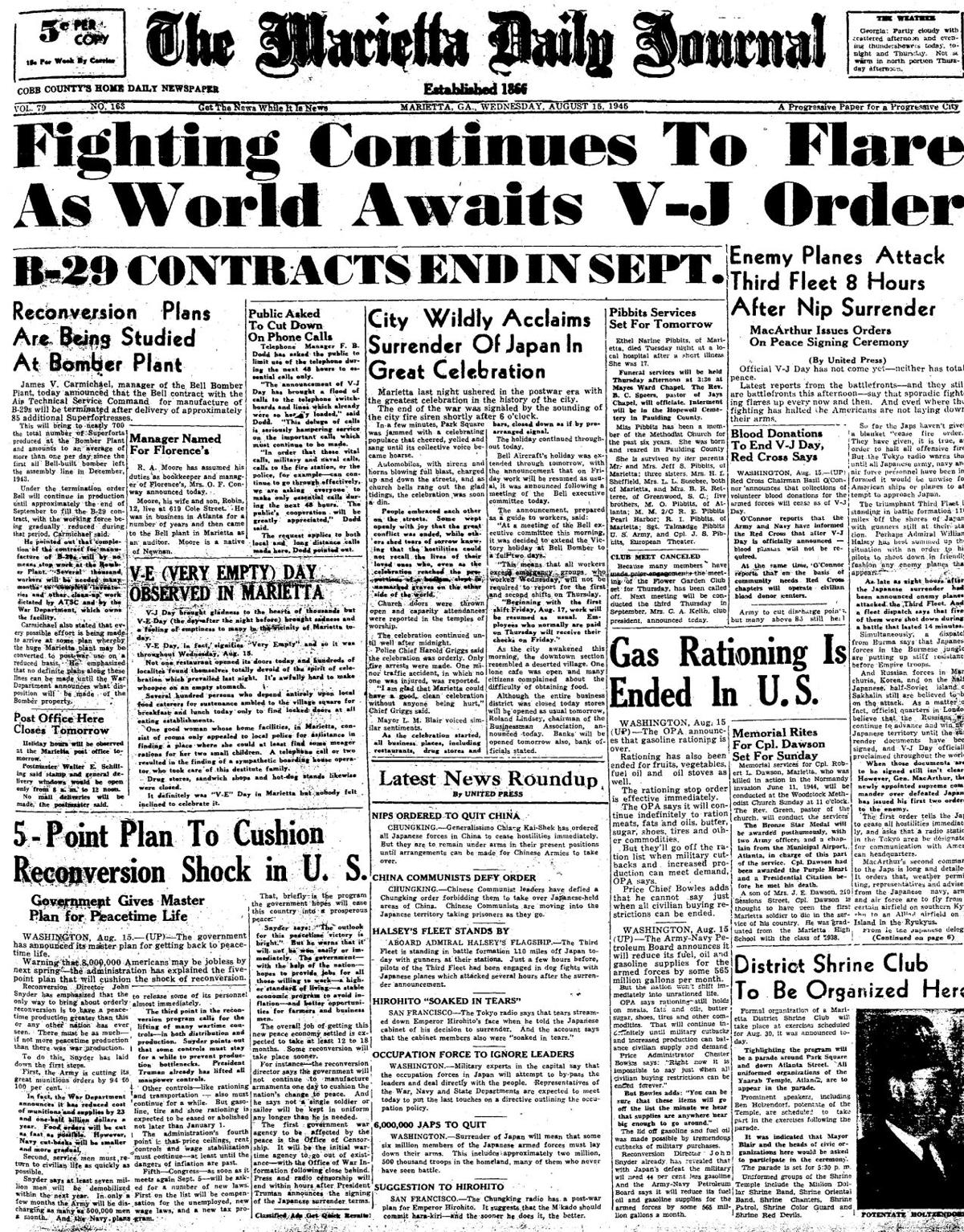 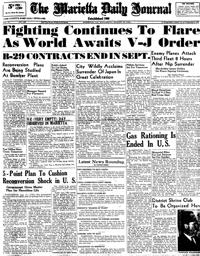 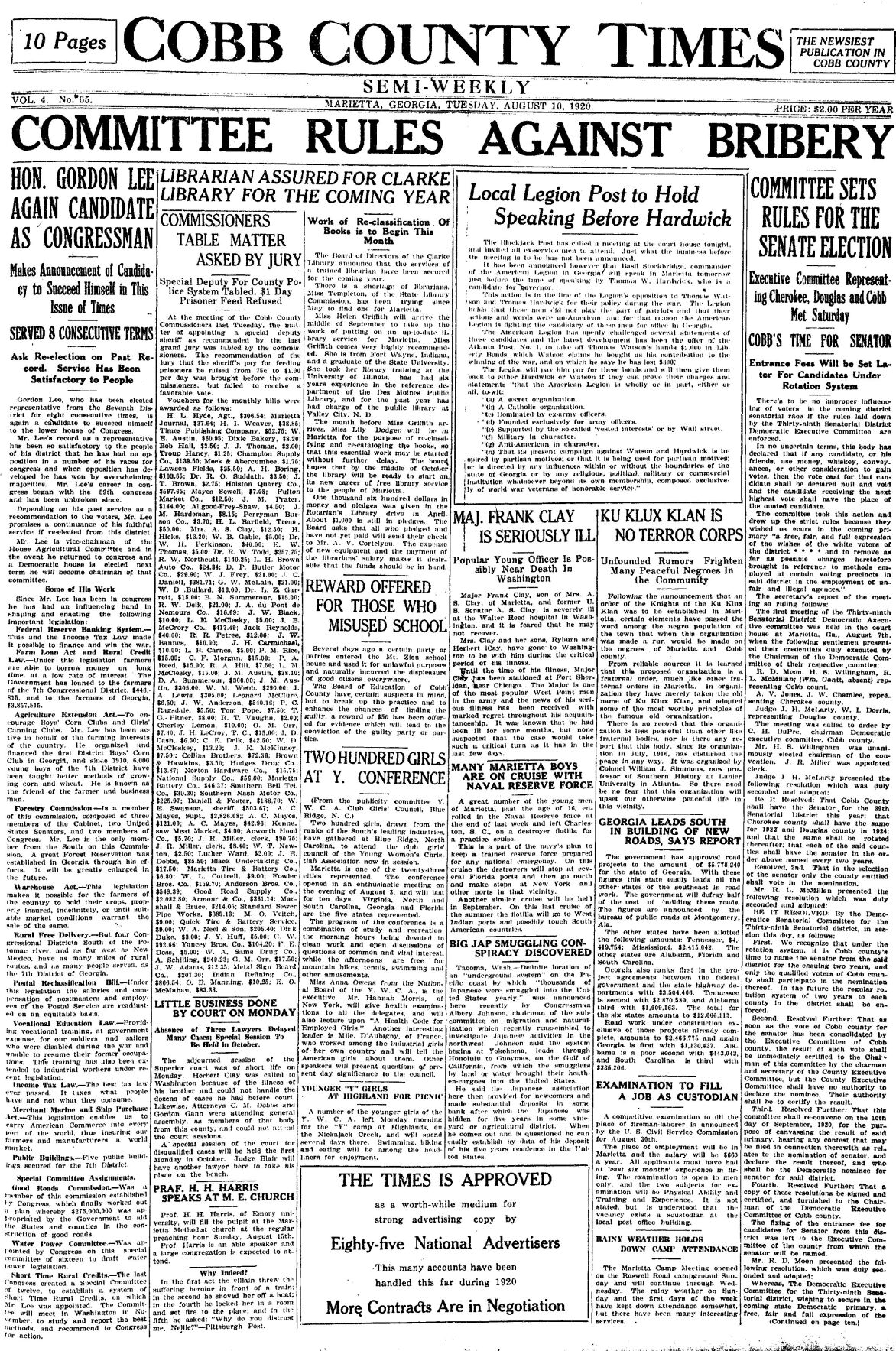 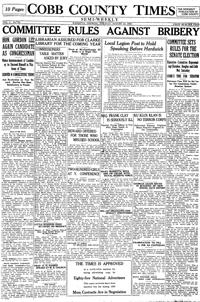 The Tuesday, Aug. 10, 1920, edition of The Cobb County Times reported that Maj. Frank Clay, son of U.S. Sen. A.S. Clay, was severely ill at the Walter Reed Hospital in Washington and it was feared that he might not recover. Up until his illness, Maj. Clay had been stationed at Fort Sheridan near Chicago.

In the “News From Our Correspondents” column, the Strickland Bridge section reported that Army worms were doing considerable damage to the farms in the area and that farmers were spraying their corn in an attempt to get rid of the scourge.

The Friday, Aug. 13, 1920, edition of The Cobb County Times reported that with the recent change of ownership of The Marietta Journal, Bernard Awtrey was returning as editor of the paper. Awtrey had been editor of The Marietta News before it was purchased by the Times Publishing Company in the fall of 1916. Since that time, he had been serving as superintendent of the county schools.

The front page carried a story out of Atlanta announcing that a one-eyed man named Norton had been acquitted of a blind tiger charge. During the Prohibition era, blind tiger was a slang term referring to a place where illegal alcohol was sold.

Norton’s attorneys initially made the humorous appeal stating that while he was blind in one eye, the man could see out of the other one and distinguish between right and wrong. With his blindness disproved, they also stated that the charge of him being a tiger hung on an equally fallacious thread.

Afterwards, real evidence was rendered that cast practical doubt upon his guilt and with a broad grin, the man was acquitted.

The Friday, Aug. 13, 1920, edition of The Marietta Journal reported that at the meeting of the Blackjack Post No. 29 of the American Legion in Marietta the Tuesday before, the post voted to change the post’s name to the Horace Orr Post. The name change was in memory of Sgt. Horace Orr of Marietta who died in battle in France during World War I.

The burial of Fred Barnes, 11, of Cedartown was reported on the front page. Barnes died in the Rome Hospital the Friday before and was brought to Marietta for burial in the city cemetery. Barnes had climbed a tree to watch a baseball game, lost his hold and fell 40 feet onto a paved sidewalk.

The Monday, Aug. 13, 1945, edition of The Marietta Daily Journal reported that Lt. E.J. Mahoney of Kansas City was the Army pilot killed when his C-47 crashed near Smyrna the Saturday afternoon before. The plane crashed in a field near the home of Mrs. O.B. Logan and set fire to the dwelling, but the flames were extinguished before causing serious damage.

Virginia Ann Finchr, 12, was burned on her arms and legs as she dashed into the burning house to rescue her 18-month-old cousin, Danny Moore.

At the time, the crash was listed as the worst plane crash in Cobb’s history. It was also the first major plane crash since a small mail plane had crashed into the side of Kennesaw Mountain almost 12 years earlier.

Marietta was reported in the Wednesday, Aug. 15, 1945, paper as ushering in the post World War II era with a grand celebration. The end of the war was signaled by the sounding of the city fire siren just after 6 p.m. the Tuesday before. Within minutes, Marietta Square was jammed with a cheering populace. Cars, with sirens and horns blowing full blast, charged up and down the streets. Church bells were ringing and people were embracing each other in the streets. The celebrations went well past midnight and were orderly.

Army Pfc. Bill G. Browning, 23, the husband of Margaret Ruth Browning, a former Smyrna resident, was reported in the Tuesday, Aug. 11, 1970, paper as having been killed in Vietnam. Browning left the U.S. on June 15, 1970 and was killed on July 20, 1970. The Army had previously listed him as missing in action.