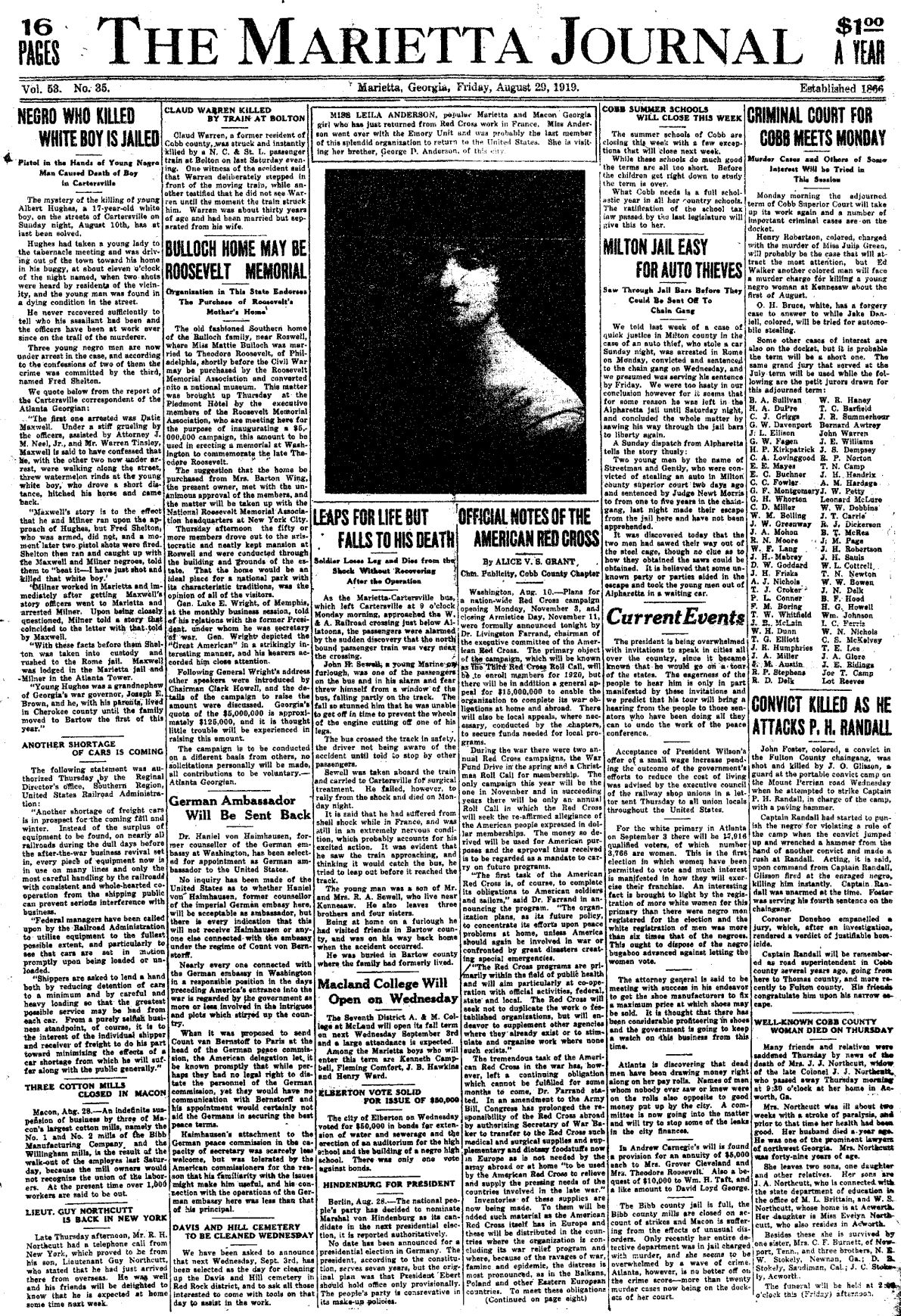 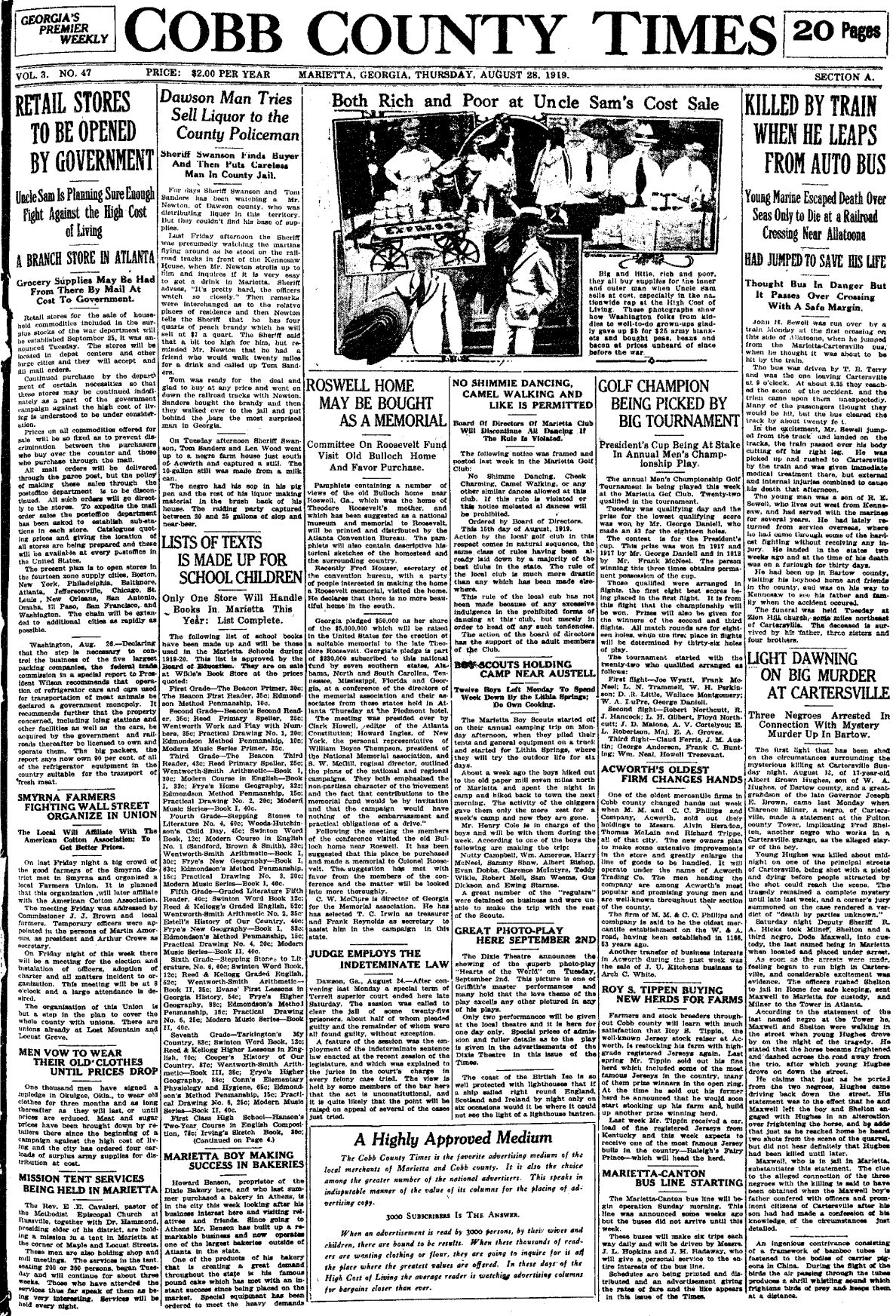 The Thursday, Aug. 28, 1919, edition of The Cobb County Times reported that John H. Sowell was killed by a train the Monday before at the first crossing in Allatoona when he jumped off the Marietta-Cartersville bus.

Several bus passengers, including Sowell, thought the bus was going to be hit by the unexpected train. The young marine — who had returned from overseas service two weeks earlier and was on a 30-day furlough — jumped off the bus. He landed on the tracks and the train ran over him, cutting off his right leg.

There were some interesting liquor busts that week.

♦Sheriff W.E. Swanson and deputy Tom Sanders were reported as having watched a Mr. Newton of Dawson County distributing liquor in Cobb County, but didn’t know where his “base of supplies” were located. The Friday before, Swanson was approached by Newton while the Sheriff was “watching the martins flying around as he stood on the railroad tracks in front of the Kennesaw House” on Marietta Square.

After an exchange, Newton tried to sell Swanson four quarts of peach brandy for $7 a quart. Swanson told Newton that it was too high for him, but he had “a friend who would walk 20 miles for a drink” and called up Sanders. The two men walked down the tracks to a place where Sanders bought the brandy. The deputy then walked “the most suprised man in Georgia” over to the jail.

♦Swanson, Sanders and deputy Len Wood were also reported as going to a farm house south of Acworth the Tuesday before and capturing a 10-gallon still made from a milk can and 20-25 gallons of “near-beer.”

♦Another story stated that 1,400-gallons of “good mountain-made corn whiskey” was discovered and destroyed by Lt. Ralph J. Bennett and a squad of internal revenue agents of the Atlanta district in Cherokee County the Sunday before. One of the two arrested distillers was John B. Eillson, who was also charged with escaping Fort Leavenworth prison where he had been serving a five-year sentence for desertion.

“No Shimme Dancing, Cheek Charming, Camel Walking or any other similar dances allowed at this club. If this rule is violated or this notice molested all dances will be prohibited.” The notice was ordered by the club’s Board of Directors on Aug. 16, 1919.

The Friday, Aug. 29, 1919, edition of The Marietta Journal reported that “the mystery of the killing of young Albert Hughes, 17, on the streets of Cartersville” the Sunday before had been solved.

Hughes, the “grandnephew of Georgia’s war governor Joseph E. Brown,” was said to have “taken a young lady to the tabernacle meeting and was driving out of town toward his home in his buggy” around 11 p.m. when two shots were heard by residents. He was found dying in the street and could not tell officers who had shot him.

Three young black men were arrested in the case. Based on confessions from two of them, the third man, Fred Shelton, was the one who committed the crime.

The Bulloch family home in Roswell, the site where Mattie Bulloch was married to President Theodore Roosevelt before the Civil War, was reported as possibly being purchased by the Roosevelt Memorial Association and converted into a national museum.

Claud Warren, 30, a former Cobb resident, was struck and killed instantly by a Nashville, Chattanooga and St. Louis Railway passenger train at Bolton the Saturday before.

John Foster, a black convict on the Fulton County chaingang, was shot and killed by J.O. Glisson, a guard at the portable convict camp on the Mount Perrian Road the Wednesday before. Foster was killed after he attempted to strike Capt. P.H. Randall, the former road superintendent in Cobb County who was in charge of the camp, with a paving hammer.

The Journal editors printed a list of the text books that would be used in the various grades of the Marietta City Schools for the coming year. Some of the prices for the books, sold at Wikle’s Book Store in Marietta, were:

Powder Springs section — A $4,000 electric light plant was ordered by the citizens and was expected to be in operation by Nov. 1, 1919.

In the Thursday, Aug. 28, 1969, Marietta Daily Journal it was reported that Gen. John Ryan, the new Chief of Staff for the U.S. Air Force, made his own personnel evaluation of the flying qualities of the Air Force’s C-5 Galaxy at the Lockheed-Georgia Company in Marietta. Gen. Ryan, who had addressed the American Legion’s national convention in Atlanta, came to Marietta to put the world’s largest aircraft through its paces, flying at various speeds and checking its responses.