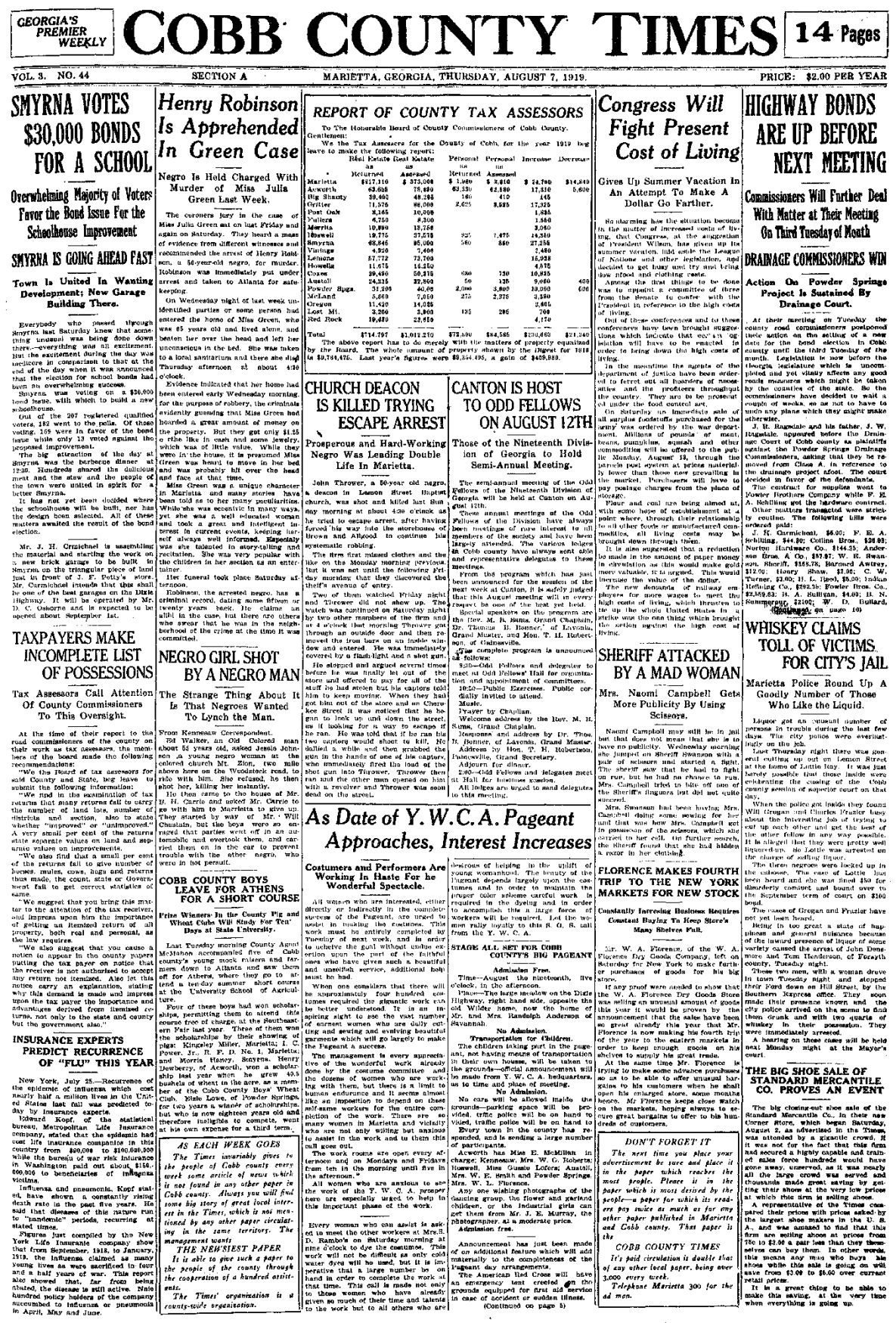 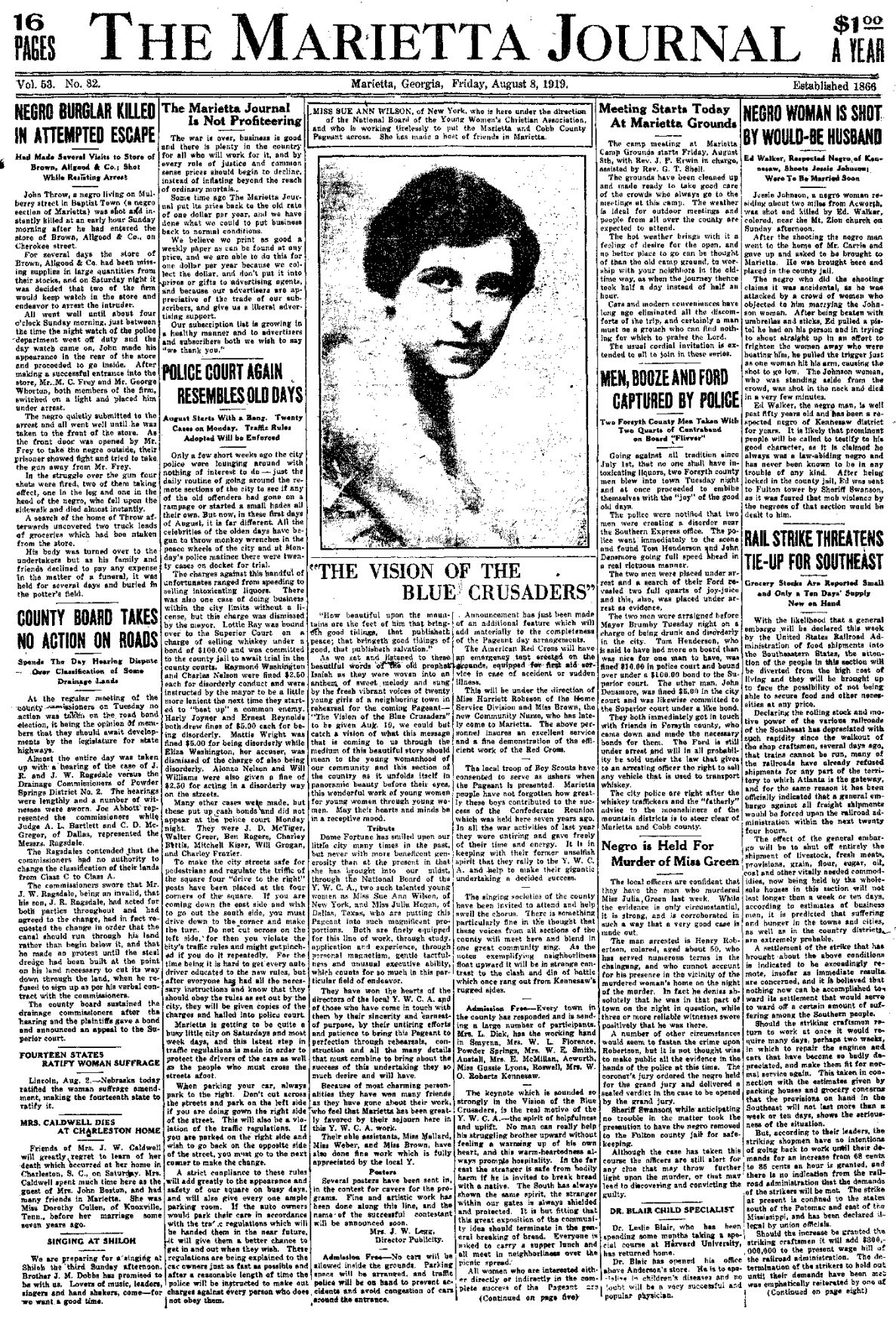 The Thursday, Aug. 7, 1919, edition of The Cobb County Times reported on the front page that John Thrower, a 50-year-old black man and deacon in the Lemon Street Baptist Church, was shot and killed the Sunday before after forcing entry into the storeroom of Brown, Allgood & Co. on Cherokee Street "to continue his systematic robbing."

The firm first noticed clothes and other items going missing the Monday before the shooting. After discovery of the thief's point of entry that Friday an overnight watch was set up.

At 4:30 a.m. on Sunday, Thrower appeared, getting through an outside door and removing iron bars on an inside window. Caught by the watchmen, he was escorted out of the store onto Cherokee Street.

Thrower was then said to have tried to grab the shotgun from one of his captors. The weapon was fired into Thrower during the struggle. He then ran down the street and was killed by the second watchman with a pistol.

A front page story carried by The Marietta Journal later in the week said that a search of Thrower's residence turned up two truck loads of property stolen from the store.

Naomi V. Campbell, the former head of the Undenominational Orphans' Home in Cobb County - who was convicted of cruelty to children at the home, was reported on the front page as having attacked Sheriff W.E. Swanson with a pair of scissors at the jail the Wednesday before. Campbell was also said to have tried to bite off one of Swanson's fingers in the attack.

Campbell gained possession of the scissors through Swanson's wife, who had been having Campbell do some sewing for her.

On the Editorial Page, in the "Press Sandwiches" column, the editors had the following item:

♦"Whatever may be the moving cause of it all, we don't know, but something ought to be done to sober down the citizens generally. News of robberies, murders and assaults is getting to be all too common."

The Friday, Aug. 8, 1919, edition of The Marietta Journal reported that police arrested Henry Robertson, a 50-year-old black man, in the murder of Julia Green the week before.

Green was found in her Waterman Street home with a broken jaw from having her face and head beaten severely with a heavy instrument which caused both eyes to swell shut. Before she died, Green stated that she was attacked in her sleep the night before. She claimed that she had chased away from her yard the day before an unknown black man.

Robertson denied that he was in that part of town the night of the murder. Several reliable witnesses, however, were said to have sworn he was there.

Jessie Johnson, a black woman living two miles from Acworth, was reported as being shot and killed the Sunday before by Ed Walker, a respected black man living in Kennesaw.

Walker claimed that the shooting at Mt. Zion Church was accidental. He said that he pulled his pistol, intending to shoot straight up, in order to frighten off a group of women that objected to his marrying Johnson. Walker, who was being beaten with umbrellas and sticks at the time, said that he was bumped just as he fired and his shot ended up striking Johnson in the neck.

Tom Henderson and John Densmore, both of Forsyth County, were arrested the Tuesday before after police were notified that the two men were "creating a disorder near the Southern Express office." A search of their Ford found "two full quarts of joy-juice," which was contraband liquor under the Prohibition laws.

In Douglas County, Villa Rica police were reported as having captured a Packard automobile the Tuesday before transporting "47 gallons of corn whiskey."

On the Editorial Page, the editors had the following items:

♦"As a young man we remember a lot of funny things that happened in Albany, but the story of the singing mouse last week makes us fear the Prohibition laws are not being properly enforced in that city."

♦"It seems that 3,784 Atlanta women have asked the right to vote in the city primary, and paid a $1 each to register. Who says these Georgia women, or any others, should be denied the right?"

In the "Around The Square" column an item announced that new traffic rules and regulations had been adopted by the city. Automobile owners were to park their cars into the curb instead of parking in the center of the Square and running into the stores.

The Tuesday, Aug. 5, 1969, Marietta Daily Journal carried on the front page a story about a narcotics raid of homes in the hippie district of Atlanta.

The story said that "between 100 and 150 hippies, many screaming 'The revolution is about to start,' hurled bricks and bottles" at policemen and state agents the day before. Half a dozen officers were hit, but none were seriously injured.

The raids came about after a two-month long investigation by undercover agents of narcotics and dangerous drug traffic in the area. Maj. Barney Ragsdale, head of the Georgia Bureau of Investigation, said that 33,000 pills were confiscated from two homes.

Editor’s Note: This is the second part of a two-part series on the Apollo 11 mission.