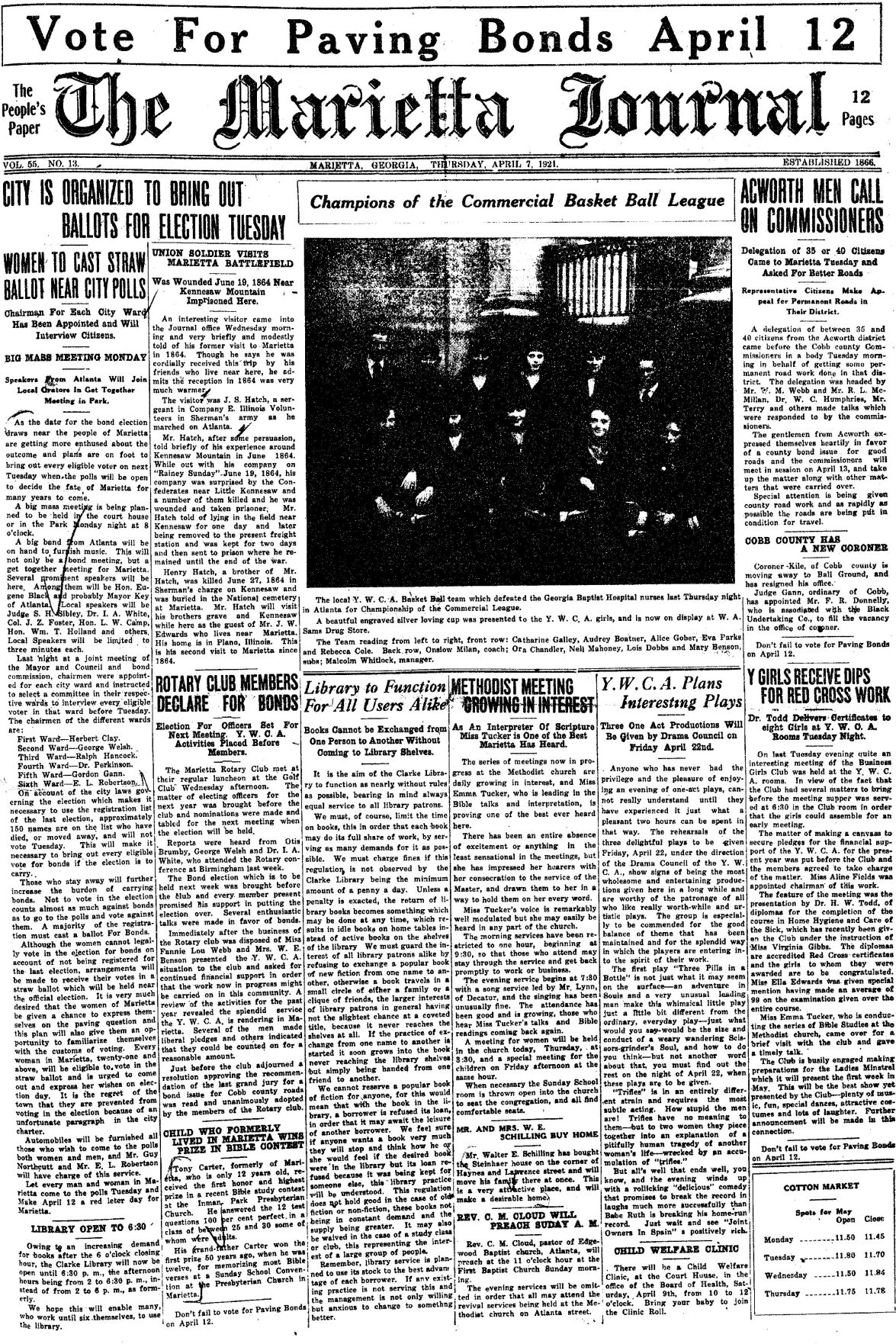 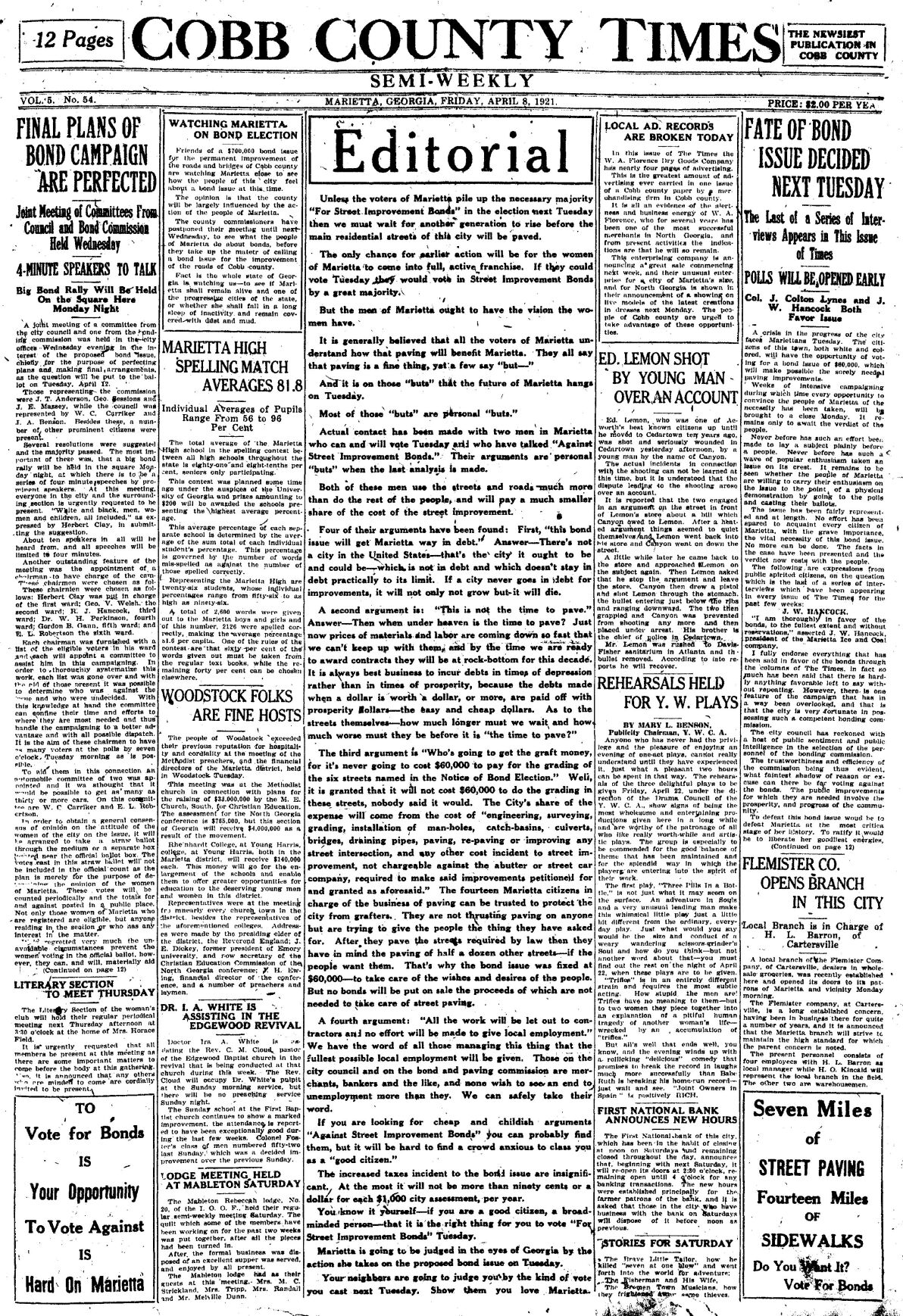 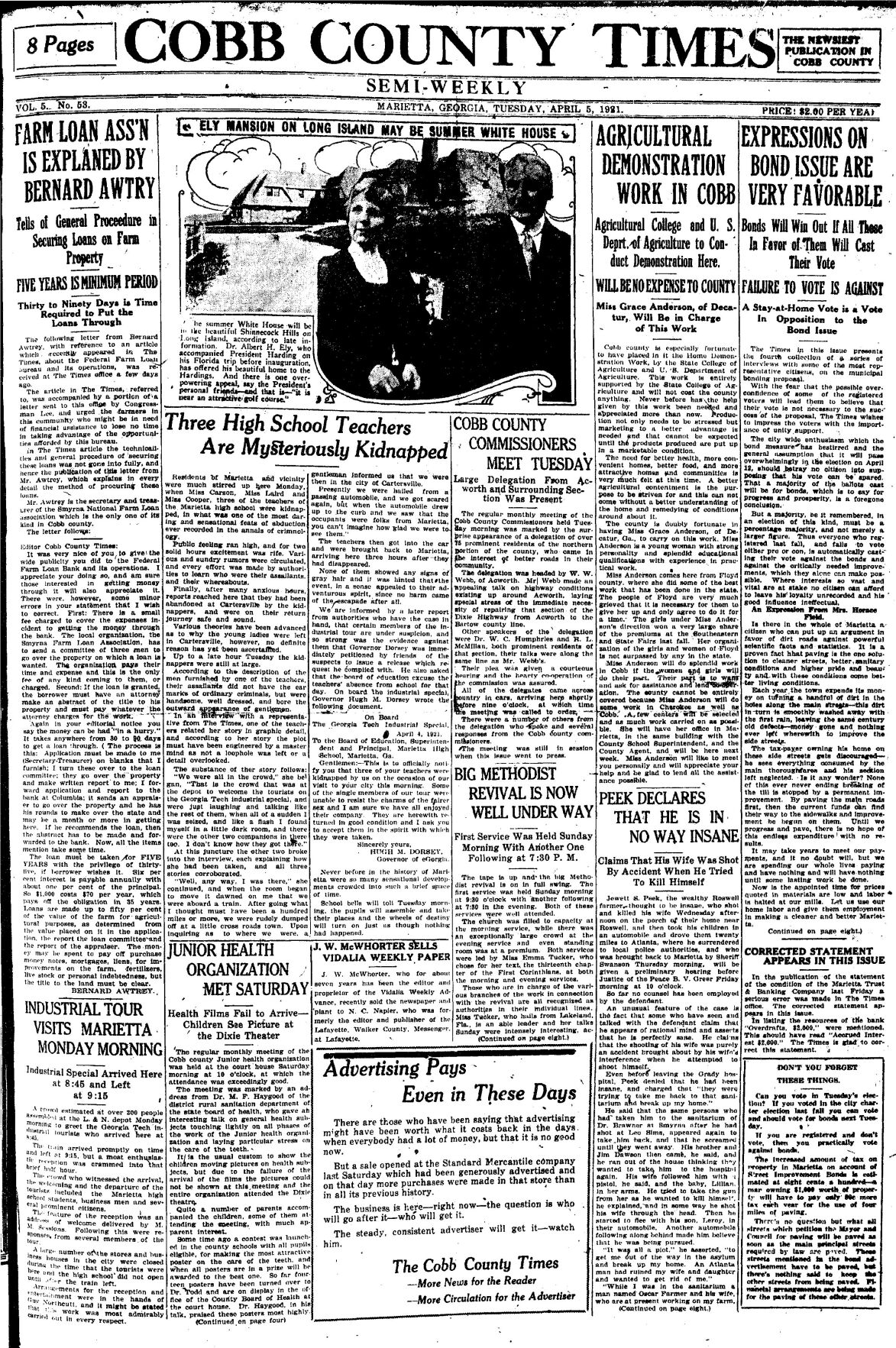 The front page of the Cobb County Times from Tuesday, April 5, 1921.

The front page of the Cobb County Times from Tuesday, April 5, 1921.

The Wednesday before, Peek was reported as becoming “mentally unbalanced,” shooting and instantly killing his wife and wounding himself. He was also said to have forced his two children, his sister-in-law and her two children into an automobile and drove them 20 miles through “the biting cold” to Atlanta where he surrendered to police.

Peek claimed that the shooting of his wife was “purely an accident brought about by (her) interference when he attempted to shoot himself.”

The farmers and merchants board of trade at Acworth were reported as planning the establishment of a large power sorghum mill in Acworth. The mill was said to be large enough to take care of all the cane syrup that farmers in that section could grow. Hundreds of acres in the section had been promised to be put toward cane production.

The Friday, April 8, 1921, edition of The Cobb County Times reported that Ed Lemon, one of Acworth’s best known citizens until he moved to Cedartown 10 years earlier, had been shot and seriously wounded the day before. Lemon was shot in the stomach in his Cedartown store by a young man named Canyon after the pair began heatedly arguing about a bill the young man owed.

The Thursday, April 7, 1921, edition of The Marietta Journal reported that an interesting visitor came into the Journal’s offices the day before and told the tale of his visit to Marietta back in 1864.

The visitor was J.S. Hatch, a sergeant in Company E. Illinois Volunteers in Sherman’s Army as he marched on Atlanta. He told the Journal about his experience around Kennesaw Mountain in June 1864. While out with his company on “Rainey Sunday” June 19, 1864, they were surprised by the Confederates near Little Kennesaw. A number of the company was killed and Hatch was wounded and taken prisoner.

He spoke of laying in a field near Kennesaw for one day and later being removed to the freight station. He was kept there for two days before being sent to prison where he remained until the end of the war.

The reason for Hatch’s 1921 visit was to see his brother’s grave. Henry Hatch was killed June 27, 1864 in Sherman’s charge on Kennesaw and was buried in the Marietta National Cemetery.

William Durham, 19, a black Cobb County teen, was reported in the Thursday, April 4, 1946, edition of The Marietta Daily Journal as being shot twice with an automatic shotgun the day before at the Milton McLain farm on Bells Ferry Road.

His father, Howard Durham, and his 15-year-old brother Marvin were being held by Sheriff Tom Sanders. William said that he had been shot by his father after they had been quarreling. Both father and brother claimed that it was Marvin who fired the weapon.

The first blast that hit the victim was on the left side of his head. The second blast struck him in the hip, but was stopped partially by his bill-fold.

In the Sunday, April 7, 1946, paper it was reported that the black community in Marietta had raised over $10,000 in a six-week whirlwind campaign to build a hospital of their own. At a rally attended by 1,000 people in the Perkinson auditorium, the campaign was reported as raising a total of $11,047.64.

An acre of land on Lawrence Street, given to the black community by the late Henry Green Cole, was chosen as the site for the Edwards Ideal County Hospital.

A storage barn in the Macland community of southwest Cobb County was reported in the Thursday, April 1, 1971, paper as being destroyed by fire, killing two horses which were stabled in the building. The barn on Macland-Dallas Highway was owned by Mitchell L. WerBell III, president of Military Armament Corporation and held U.S. government contracts for manufacturing machine guns and other devices. Fire officials had not determined the cause of the fire, but arson was being investigated.

The Friday, April 2, 1971, paper reported a raging, three-alarm fire — which took seven fire trucks an hour to control — destroyed the auditorium and educational plant of the Davis Chapel on Bankhead Highway in Mableton the morning before. The fire left behind a $300,000 pile of charred rubble.