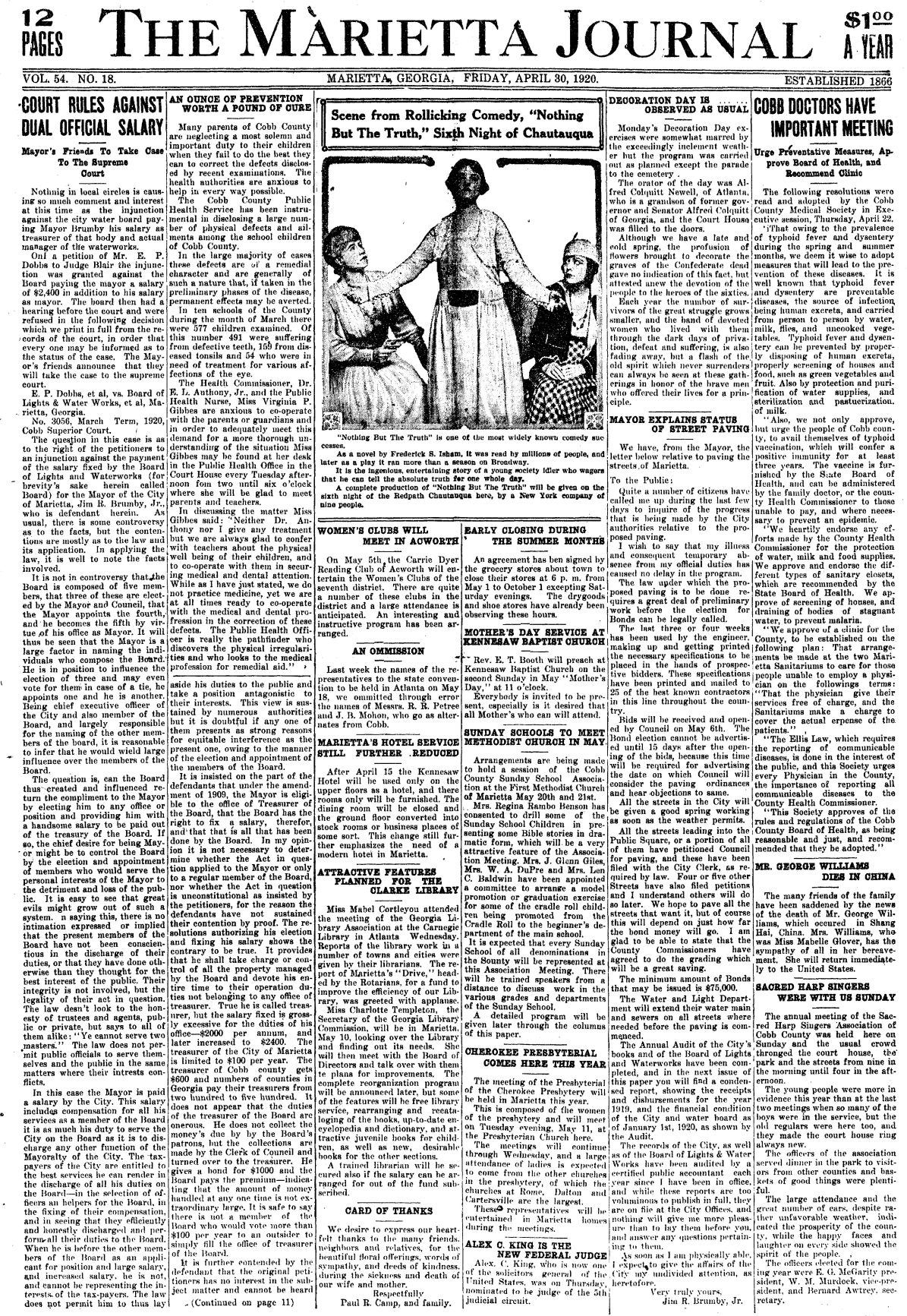 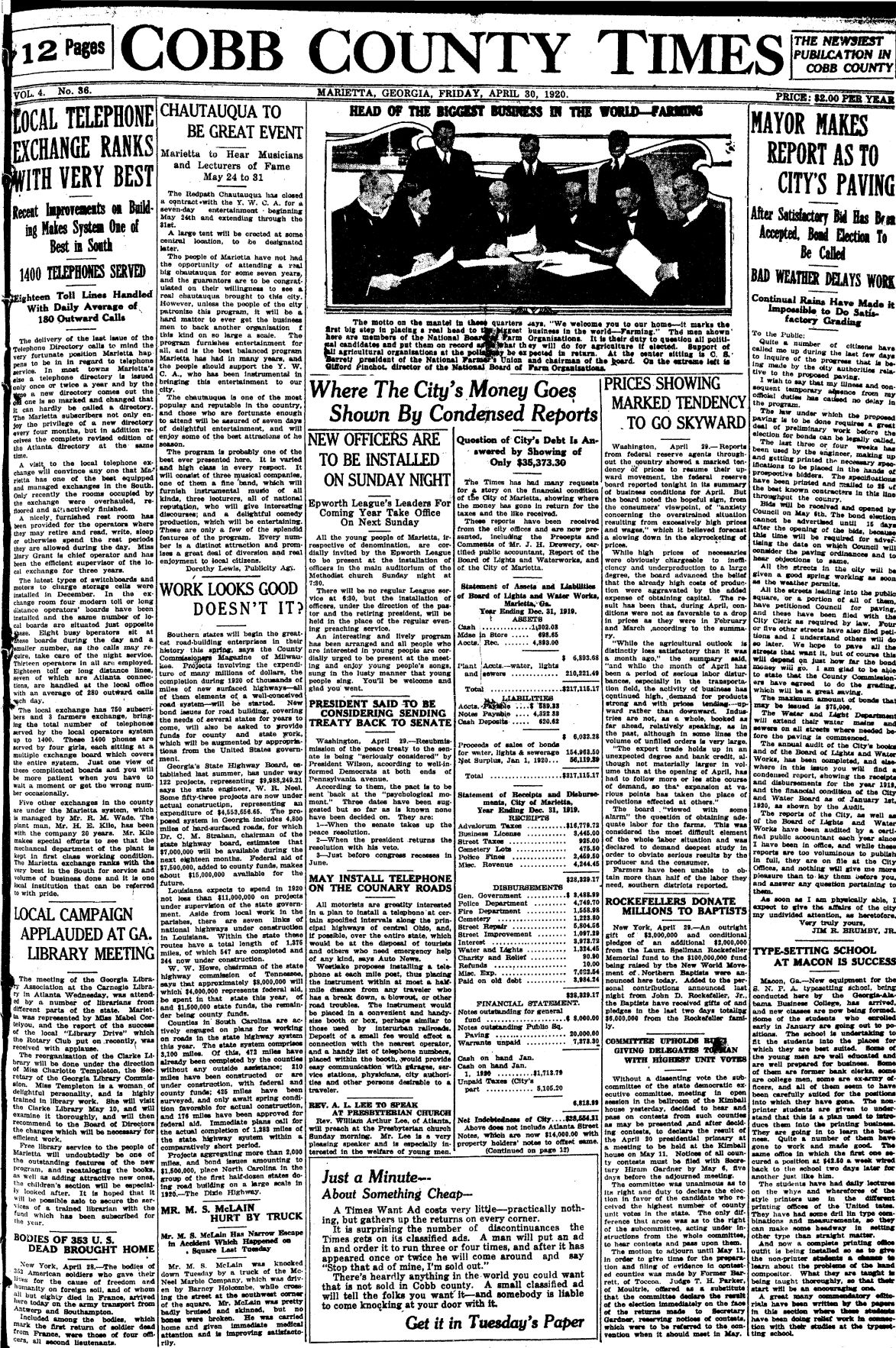 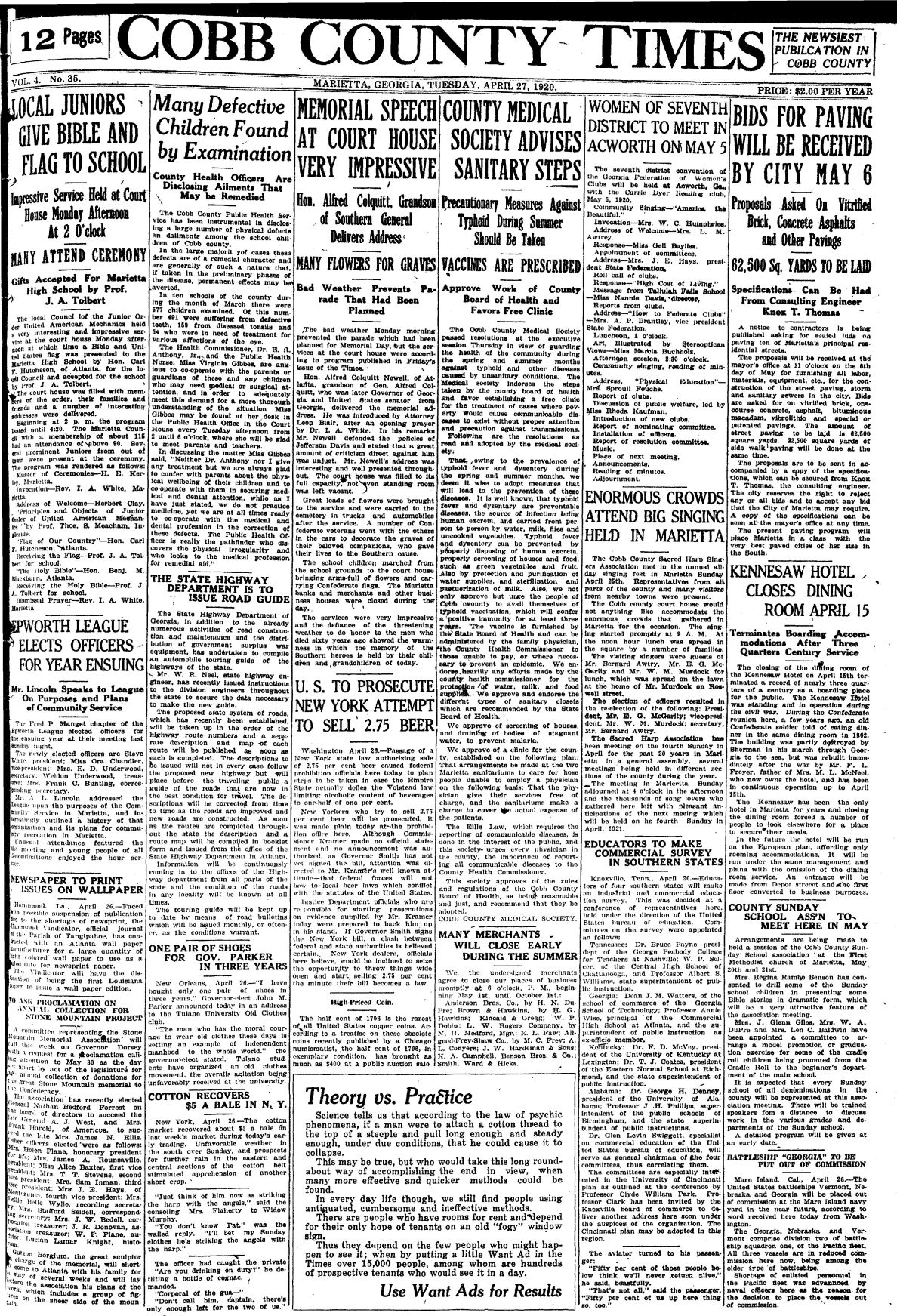 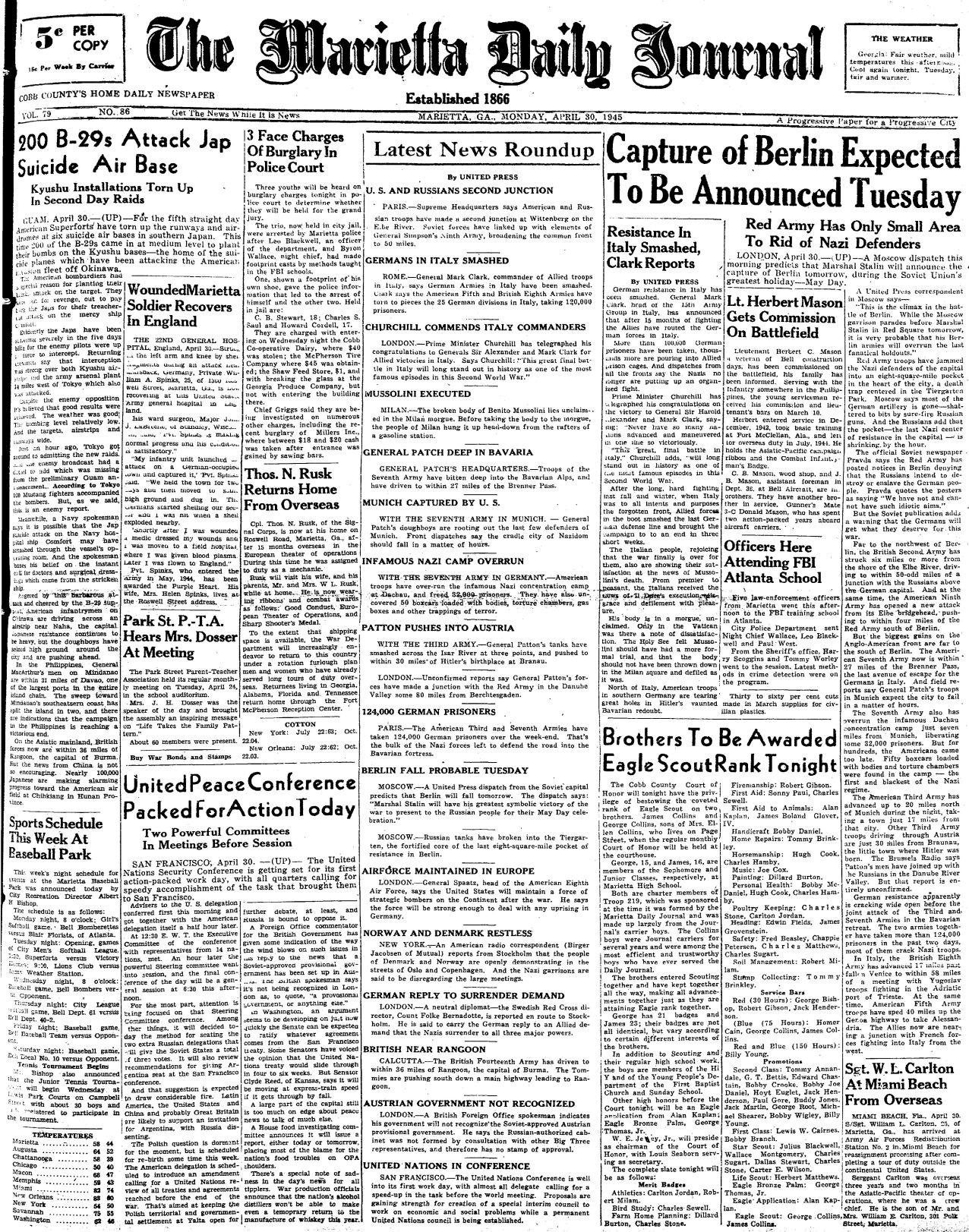 The Tuesday, April 27, 1920, edition of The Cobb County Times reported on the front page that the Cobb County Public Health Service examined 577 children in 10 county schools and found that “491 were suffering from defective teeth, 159 from diseased tonsils and 54 who were in need of treatment for various affections of the eye.”

A second health story reported that the Cobb County Medical Society had passed resolutions the Thursday before to guard public health in the spring and summer months against typhoid and other diseases caused by unsanitary conditions. The Society was establishing a free clinic for the treatment of cases where poverty would cause communicable diseases to exist.

The closing of the dining room at the Kennesaw Hotel on April 15, 1920, was reported as having ended the 75-year history of the boarding house. The Kennesaw Hotel was standing and in operation during the Civil War.

The article said that during a recent Confederate veteran reunion, one old soldier told how he had eaten dinner in the same dining room in 1862. The building had been partly destroyed by Sherman in his march through Georgia to the sea, but was rebuilt immediately after the war by F.L. Freyer, father of M.L. McNeel, who owned the hotel.

In the “News About the City” column, editor Mrs. Harold Hawkins reported that ex-Gov. and Mrs. Joseph M. Brown, Cora Brown and Joe E. Brown, all of Marietta, left the Monday before for Washington, D.C., where they would attend the wedding of Charlie Brown and Helen Baxter. Charlie was the youngest son of Gov. Brown. After the wedding, the party was expected to make a short visit to New York.

There was an interesting item on Page 6 that reported that a pickpocket alarm invented in Europe is “small enough to be carried in a vest pocket and explodes a cartridge when any object under which it is laid is moved.”

The Friday, April 30, 1920, edition of The Times reported the following item from the “News From Our Correspondents” column:

♦ Olive Springs section — Mr. and Mrs. G.M. Alexander were reported as being frequent visitors to Dr. C.T. Nolan’s sanitarium to see their daughter, Fay Alexander, a nurse who had contracted typhoid fever while working at the sanitarium.

♦ Technician Fifth Grade Harold R. Eaton, 37, of Marietta was reported as having died of pneumonia in a German prison camp on Feb. 15, 1945. Eaton went missing in action in Luxembourg on Dec. 20, 1944. He was the former operator of the Marble Mill Inn in Elizabeth.

♦ Pfc. Dilmas C. McPherson of Acworth, a member of the American Military Police battalion stationed in a key Belgian city, was reported as being among a group from his unit chosen to accompany Queen Wilhelmina of the Netherlands on her return to the liberated provinces of Holland.

♦ Lt. James Frey of the U.S. Navy Reserve was reported as having been killed on duty in a plane crash into the sea on Jan. 7, 1945, while en route home from Puerto Rico.

♦ Seaman First Class James E. Brown of Smyrna was reported as being killed on Jan. 9, 1945, in the Lingayen Gulf action.

♦ Pvt. Richard Dobbins was reported as having been liberated and returning to the U.S. Albert Dobbins, his brother was informed by a series of telegrams from the War Department. Pvt. Dobbins had been captured “during the final German breakthrough.”

♦ Bell Bomber Plant employee Joe Carold Standridge, 16, was reported as having died the day before en route to the Marietta Hospital after his car was hit by a southbound Louisville & Nashville passenger train at the Atlanta Street crossing.

♦ Sgt. Dick Hay, nephew of Mr. and Mrs. Mayes Ward, was reported as missing in action in Germany.

♦ Col. Carl A. Cover, former manager of the Bell Bomber Plant and a vice president of Bell Aircraft Corporation who was killed in November 1944 in a plane crash at Wright Field, Ohio, was reported as being posthumously awarded the Legion of Merit during special ceremonies held in Los Angeles.