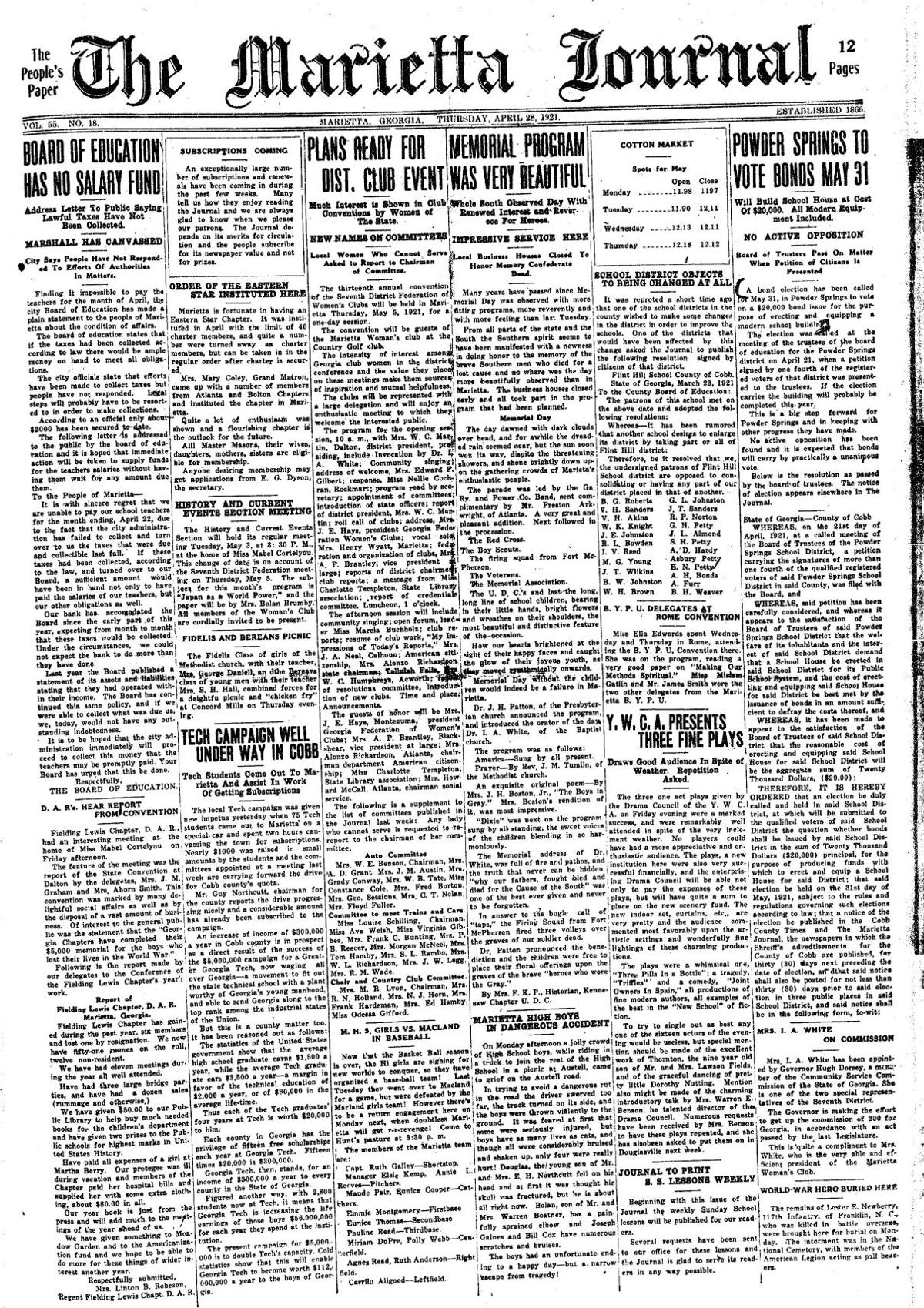 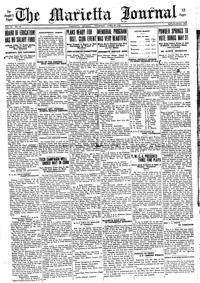 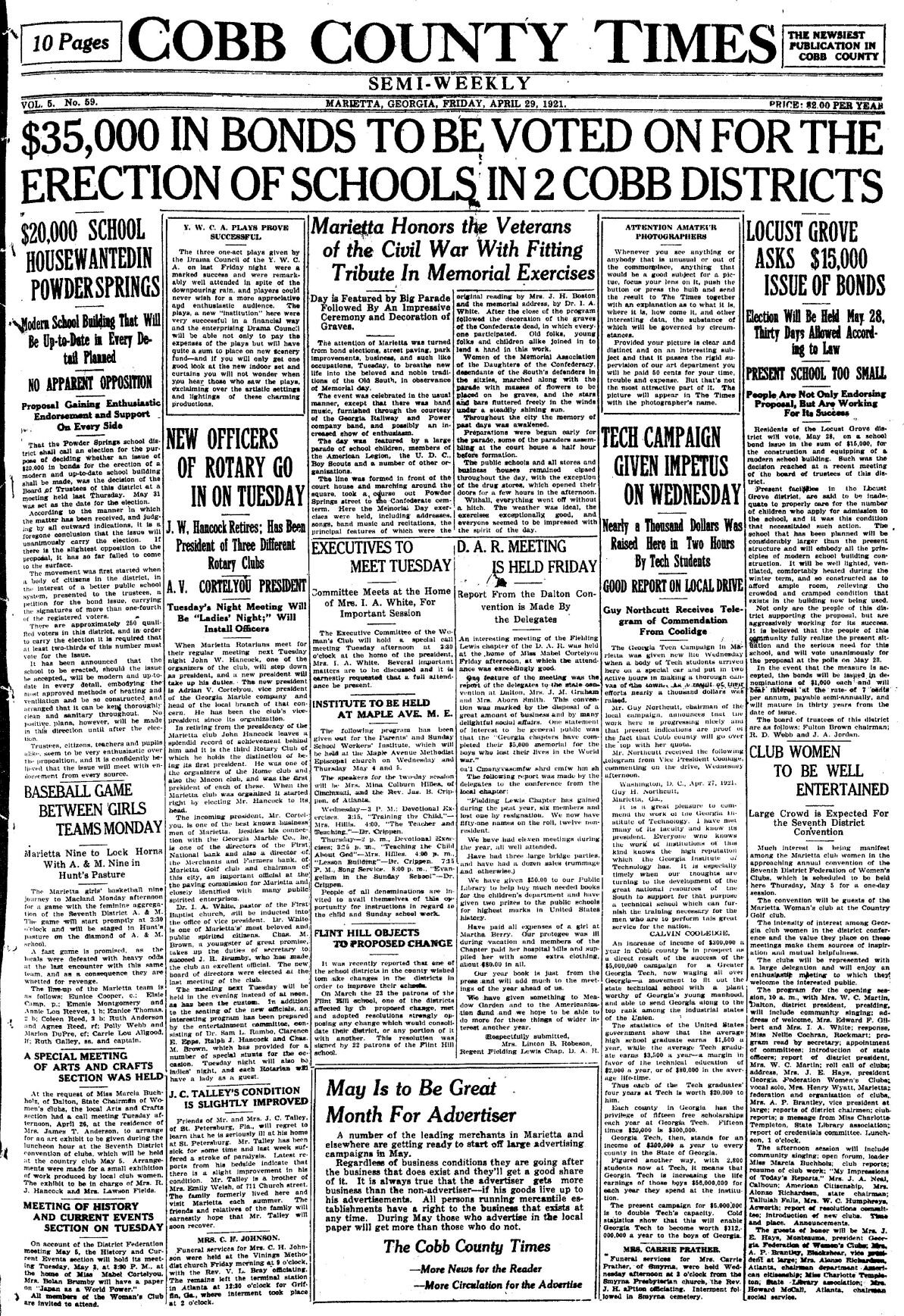 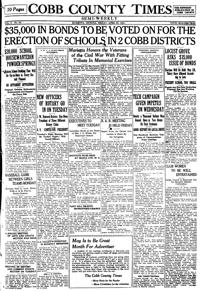 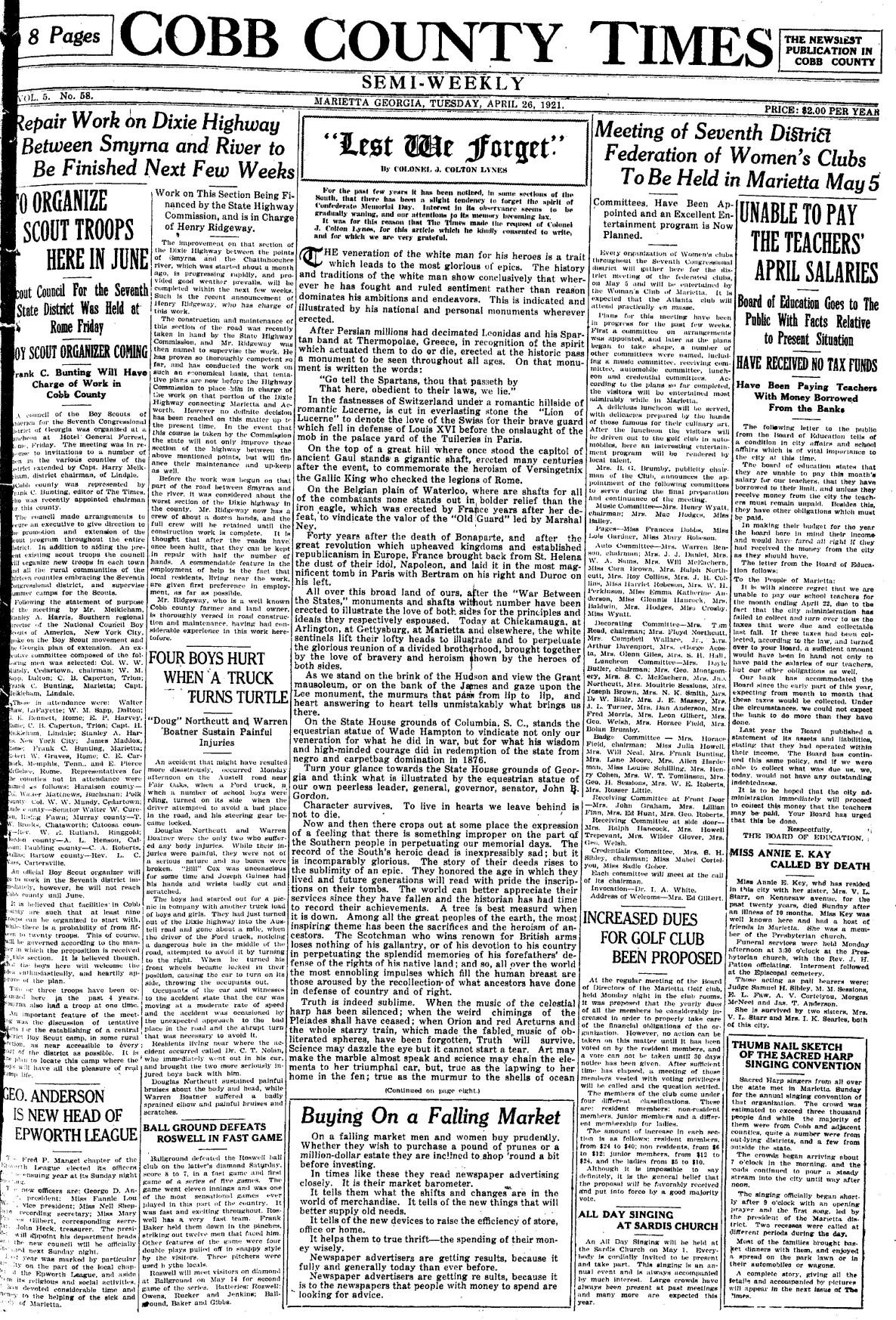 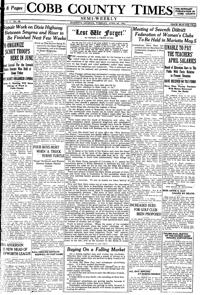 The Friday, April 26, 1921, edition of The Cobb County Times reported on an accident that occurred the Monday before on Austell Road near Fair Oaks when a Ford truck loaded with school boys tipped over on its side. The accident occurred when the driver tried to avoid a bad place in the road and his steering gear suddenly became locked.

The boys were on their way to a picnic, following another vehicle loaded with boys and girls.

A meteor, traveling through the air in a southwesterly direction, was reported as having exploded recently close to the earth near Pitts, Georgia and caused the buildings to be shaken. The explosion was heard for miles.

The meteor had a vivid brightness and was plainly seen in the cloudless sky. Its trail was visible for two minutes.

A black man, working a field where the six-pound piece of red hot metal struck, unearthed the fragments five feet below the surface. Fifteen minutes after the fall they were still too hot to handle. The largest piece was sent to Atlanta for analysis.

The Friday, April 29, 1921, edition of The Cobb County Times reported in the Milford section of the “News From Our Correspondents” column that Seab Gann’s friends met and planted his crops for him the Monday before. Gann hurt his hand while working at a saw mill in Florida three months earlier and did not have use of the limb since.

The Thursday, April 28, 1921, edition of The Marietta Journal reported that the remains of Lester E. Newberry, 117th Infantry of Franklin, North Carolina, who was killed in battle overseas during World War I, were brought to Marietta for burial the Monday before. The internment was in the Marietta National Cemetery with members of the American Legion acting as pall bearers.

The Sunday, April 21, 1946, edition of The Marietta Daily Journal reported that Judge J.J. Daniell administered the oath of Sheriff to Harry R. Scoggins in the presence of Judge J.H. Hawkins. Scoggins was the chief deputy of Sheriff T.M. Sanders, 66, who suffered a heart attack in his courthouse office the week before.

A small twister was reported in the Friday, April 23, 1971, paper near North Cobb High School while the state was under a tornado warning before noon that day. Day turned into night when the storm front passed over Cobb County. Marietta’s streets had six inches of water on them minutes after the black clouds dumped the heaviest of April showers. The front part of Wilkey’s grocery store and service station on old U.S. 41 was lifted off and flung 10-12 feet away. Acworth and Woodstock were the hardest hit with fallen trees blocking some streets and plate glass windows in several stores blown out by high winds.