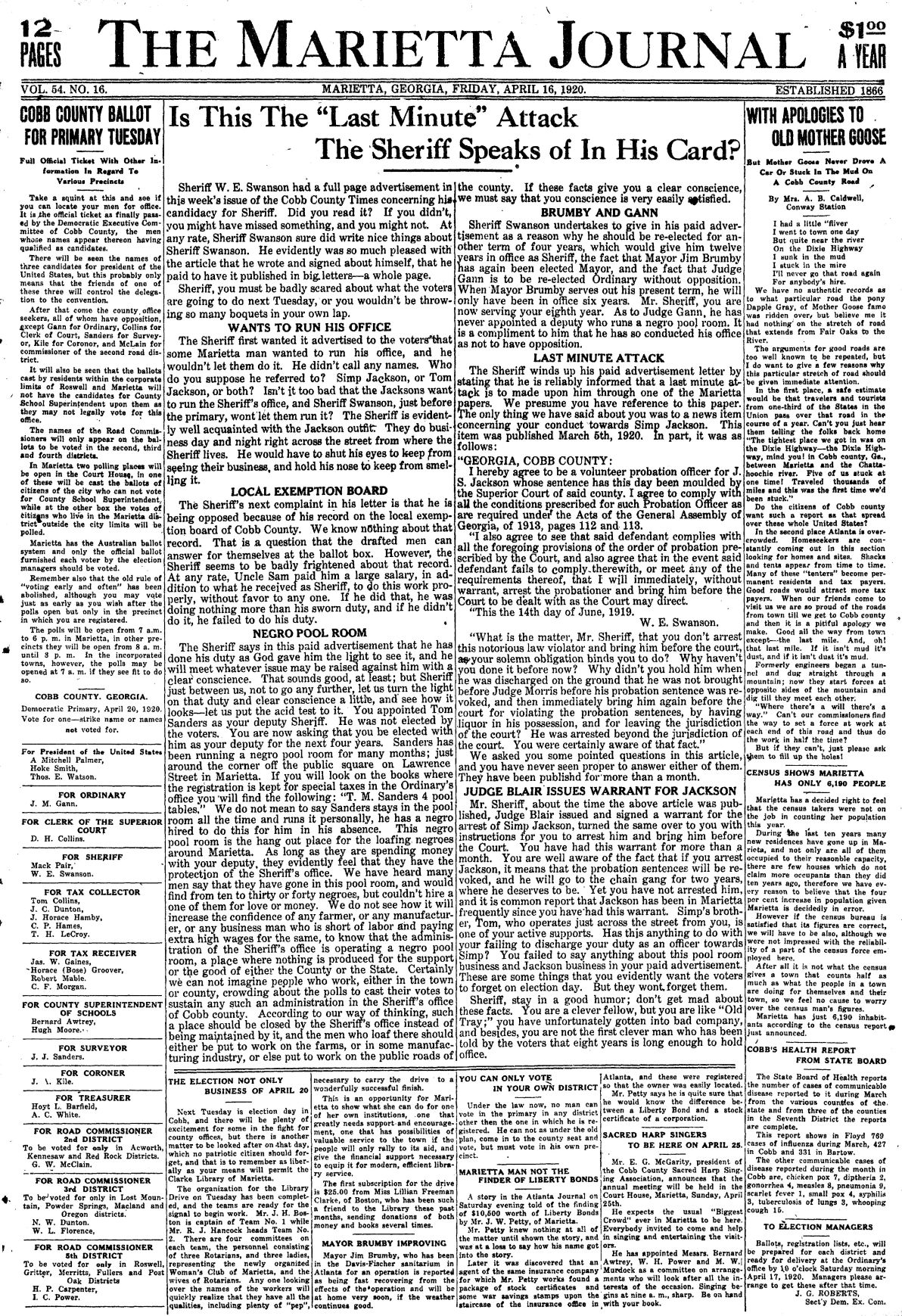 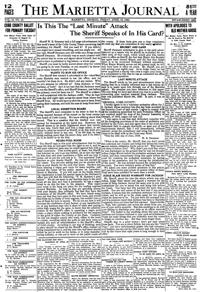 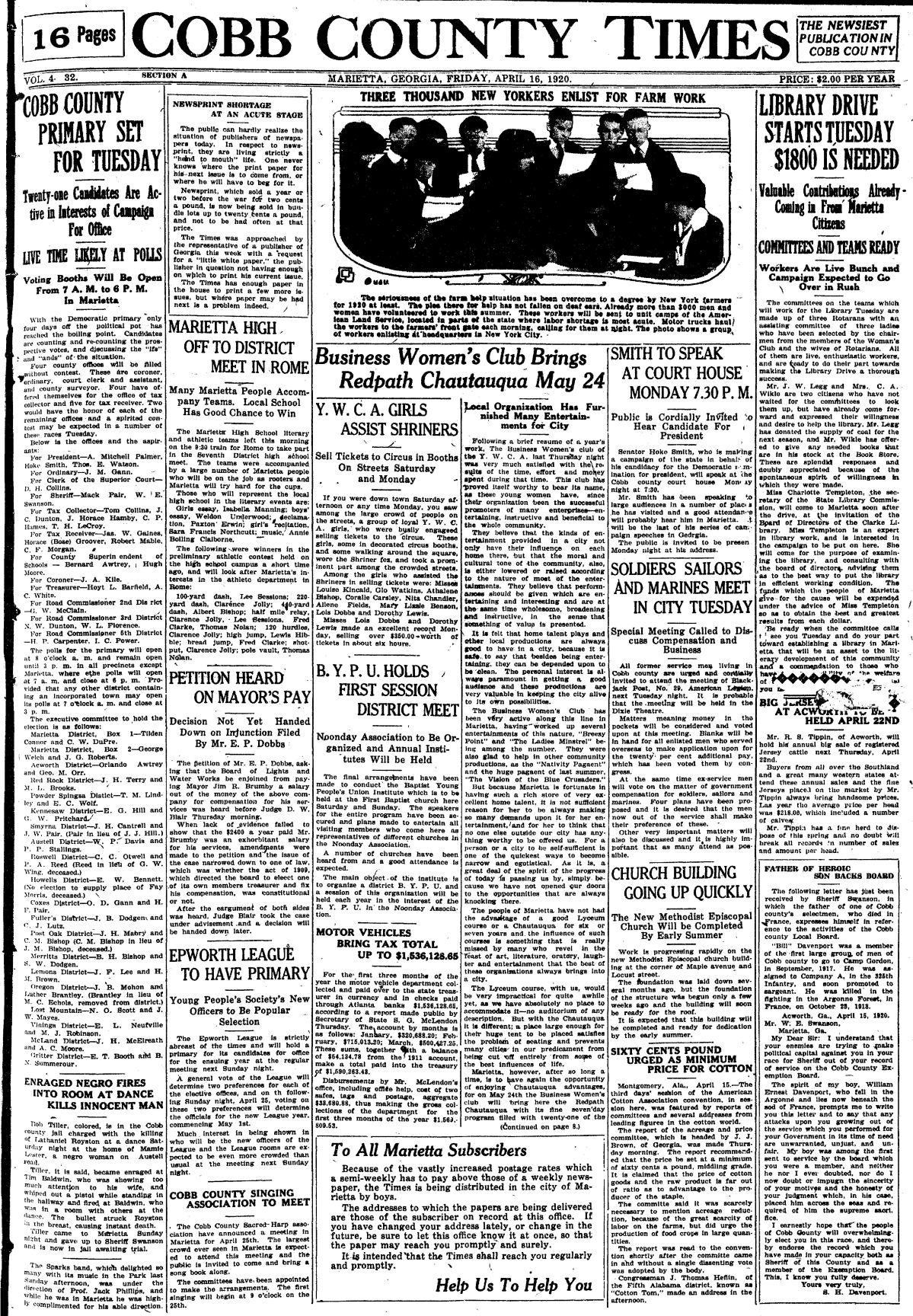 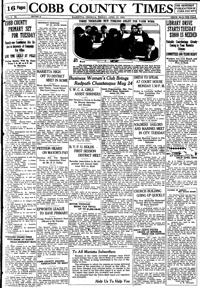 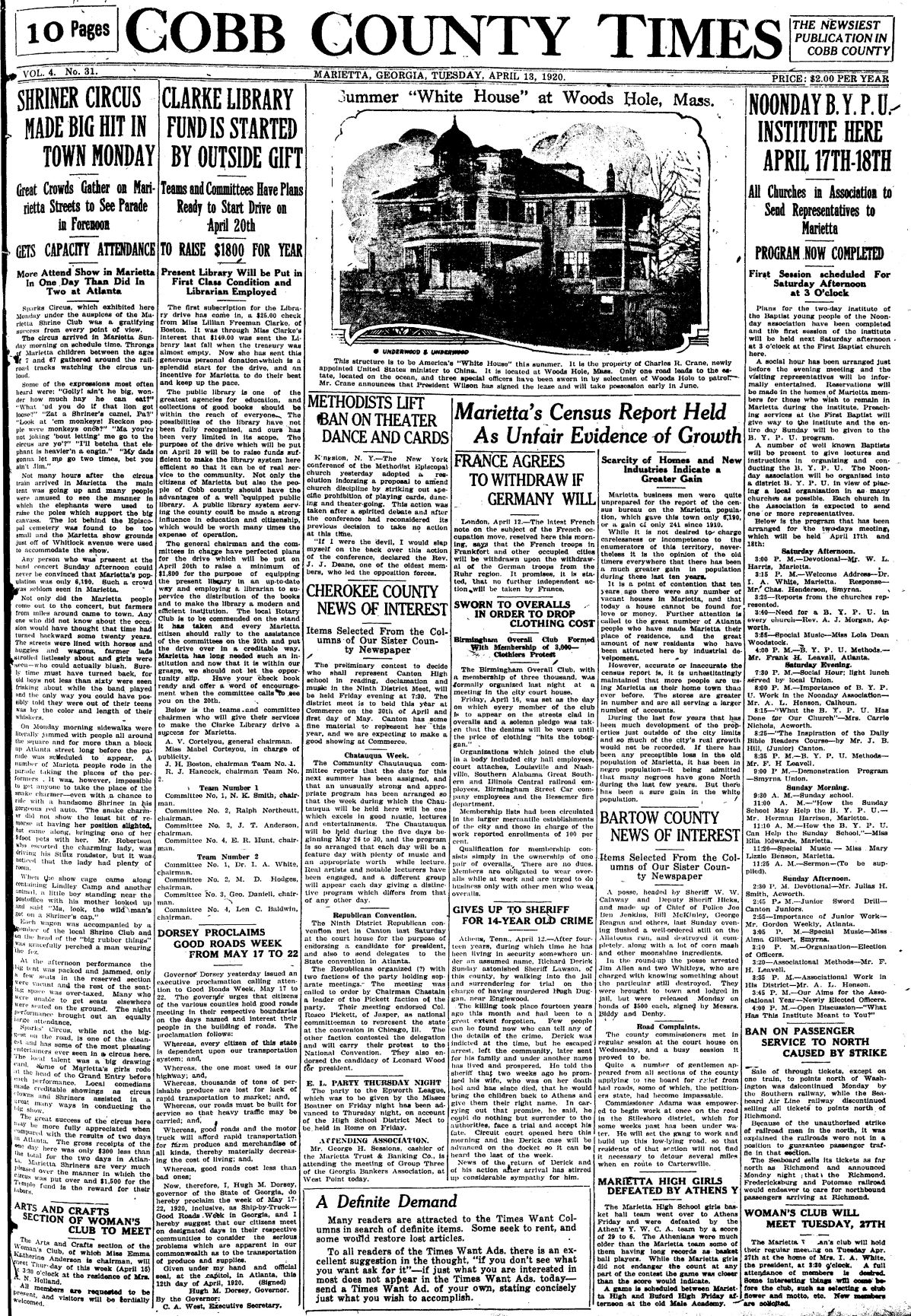 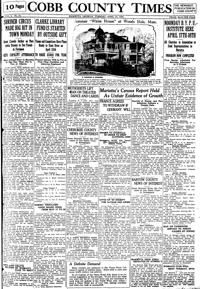 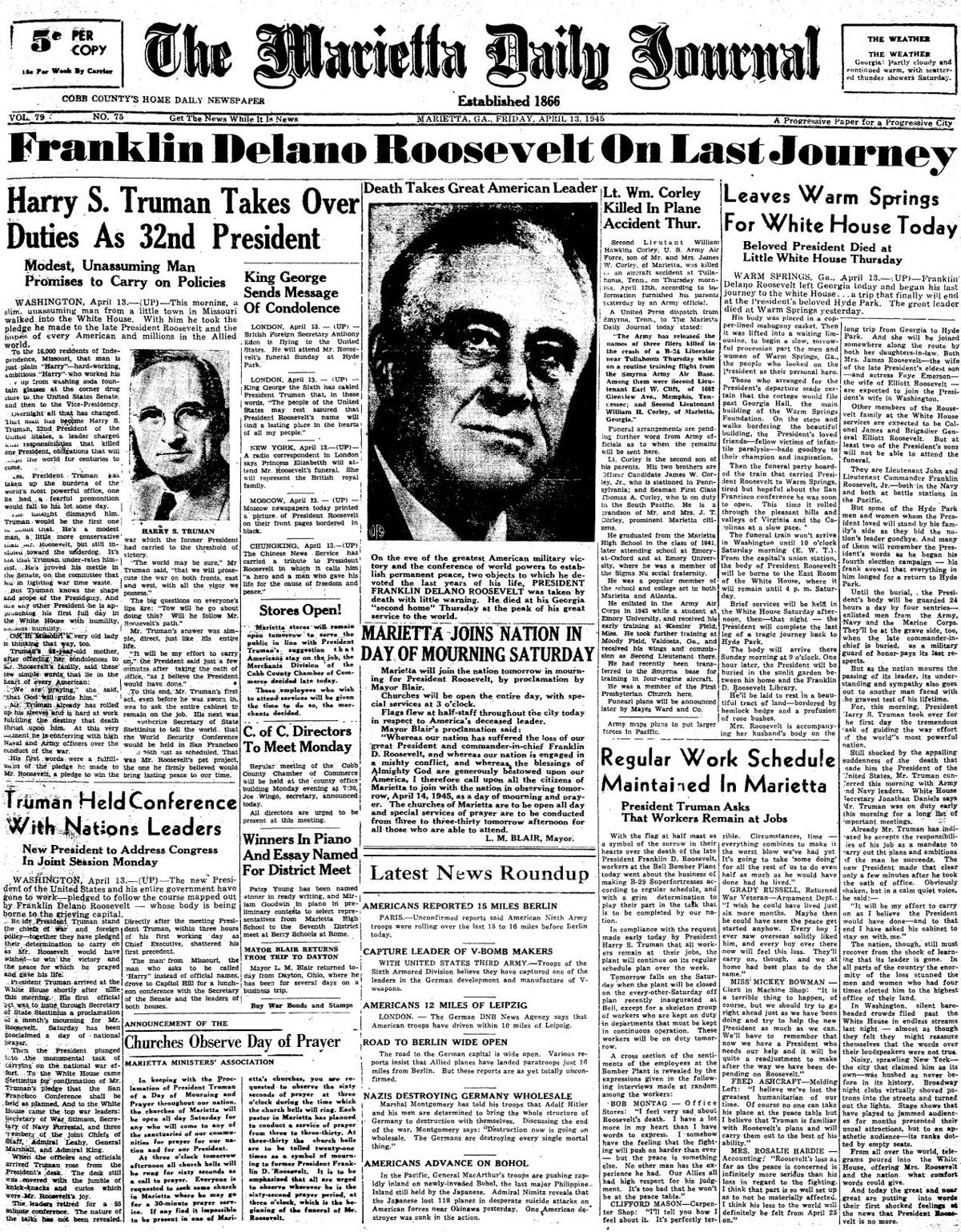 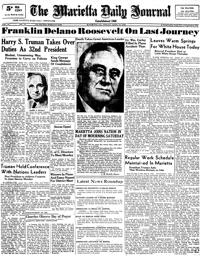 The front page of The Marietta Daily Journal from Friday, April 13, 1945. 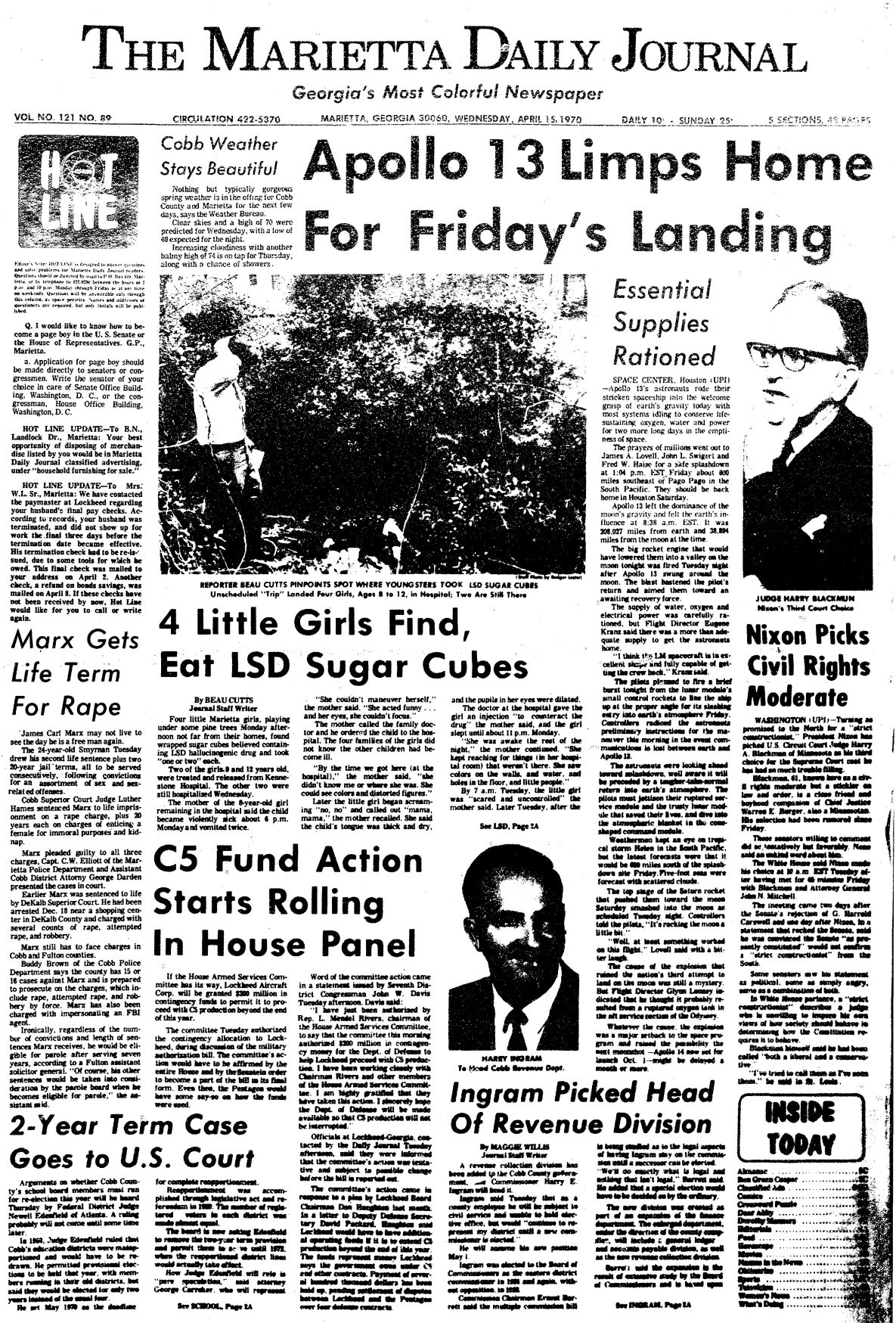 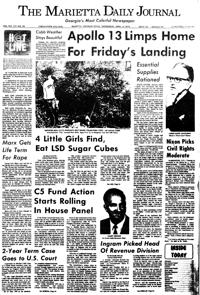 The front page of The Marietta Daily Journal from Friday, April 13, 1945.

The Tuesday, April 13, 1920, edition of The Cobb County Times reported that the Sparks Circus was a big hit in the city the day before. The circus arrived in Marietta on Sunday to “throngs of children, ages 7 to 67, gathered around the railroad tracks” to watch the circus unload. The lot behind the Episcopal Cemetery was determined to be too small, so the circus was erected at the “Marietta show grounds off Whitlock Avenue.” Many were reported as being in awe of the elephants that were used to raise the support poles, erecting the canvas of the big tent.

The Birmingham Overall Club, with a membership of 3,000, was formally organized the night before at the Marietta court house. April 16, 1920, was selected as the day that every member would appear on the city’s streets clad in the overalls. A pledge was also taken that they would only wear the denim until the price of clothing drops.

The Friday, April 16, 1920, edition of The Times reported that Bob Tiller was in the Cobb County Jail after killing Nathaniel Royston at a dance held in the home of Mamie Lester on Austell Road. Tiller was said to have become enraged and pulled a pistol after Tim Baldwin started paying too much attention to Tiller’s wife. A shot was fired and Royston, an innocent bystander, was struck and killed instantly.

There was a large ad on Page 8 that announced Hoke Smith, candidate for president, was to speak at the Marietta Court House on April 19, 1920.

The Friday, April 16, 1920, edition of The Marietta Journal had the editors addressing on the front page Sheriff W.E. Swanson’s two recent full page advertisements in the Times. Part of what the editors said was:

“Sheriff Swanson sure did write nice things about Sheriff Swanson. He evidently was so pleased with the article that he wrote and signed about himself, that he paid to have it published in big letters — a whole page. Sheriff, you must be badly scared about what the voters are going to do next Tuesday, or you wouldn’t be throwing so many bouquets in your own lap.”

On Page 7, the Marietta Coca-Cola Bottling Co. ran an ad that said:

“If you want a cheap drink we would not suggest Coca-Cola. If you want the best drink, Coca-Cola will meet your demands. There is nothing cheap in Coca-Cola.”

The Tuesday, April 10, 1945, Marietta Daily Journal announced that Sgt. Fred H. Trezevant, who had recently been liberated from a German prisoner of war camp, was among the 1,500 American soldiers to return to the U.S. Gaunt and weary. The soldiers arrived aboard an Army troop transport cheering wildly. Many of the men described pitiful months of near-starvation and foul living conditions under their Nazi guards.

Capt. Lucas M. Neas of Marietta was reported in the Wednesday, April 11, 1945, paper as being missing in action over Japan since March 15, 1945. Neas was serving as a Flight Commander on a B-29.

The front page of the Friday, April 13, 1945, paper announced that President Franklin Delano Roosevelt died in Warm Springs “on the eve of the greatest American military victory and the conference of world powers to establish permanent peace.”

2nd Lt. William Hawkins Corley of Marietta, serving with the U.S. Army Air Force, was also reported that day as being killed in an aircraft accident at Tullahoma, Tennessee, the day before.

In the Wednesday, April 15, 1970, paper it was reported that four little Marietta girls, playing under some pine trees not far from their homes the Monday before, found wrapped sugar cubes that were believed to have been laced with LSD. The girls, unaware of the drug, were said to have eaten one or two each and had to be taken to Kennestone Hospital for treatment.