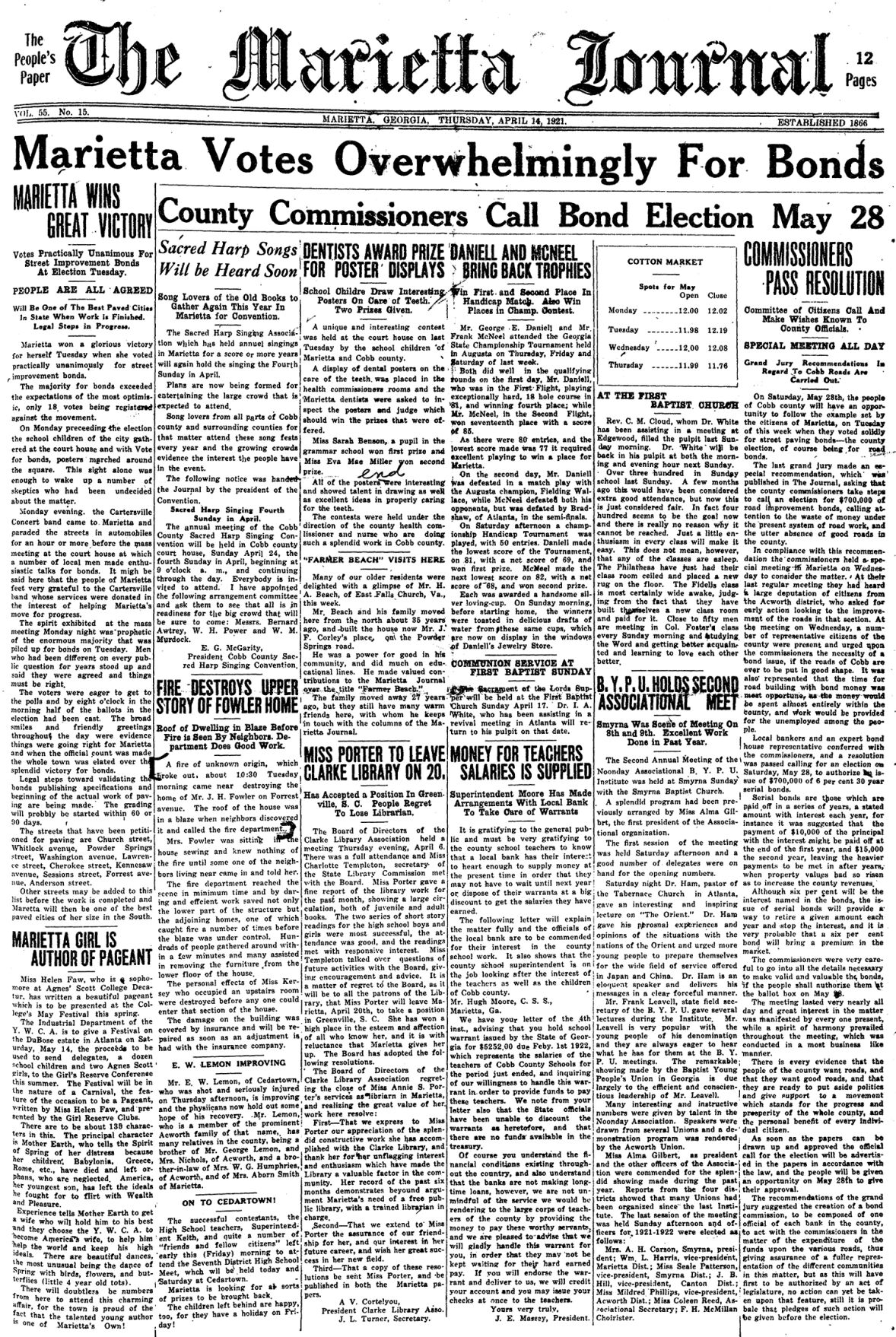 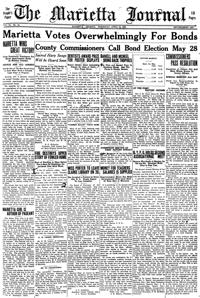 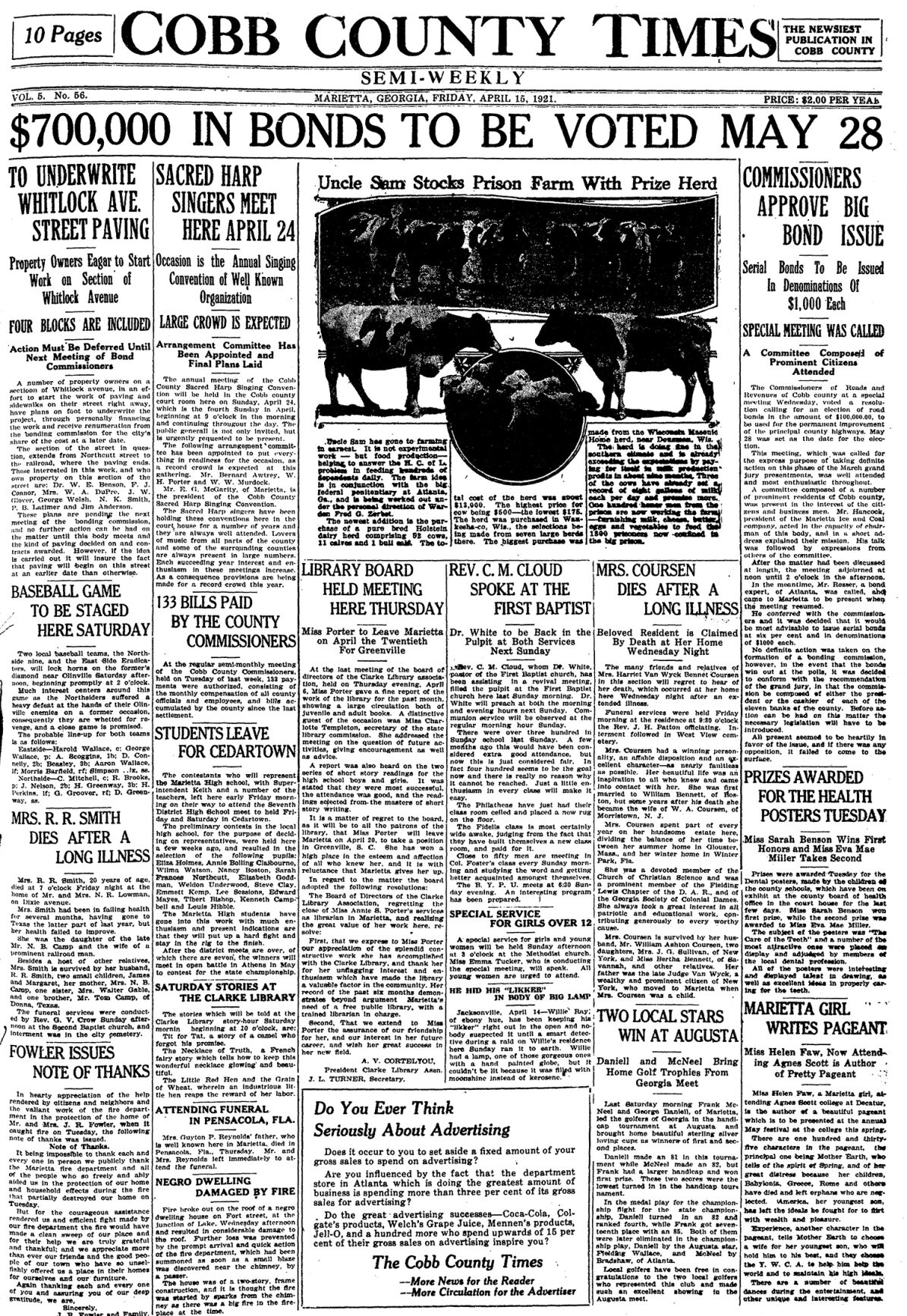 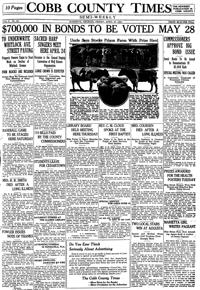 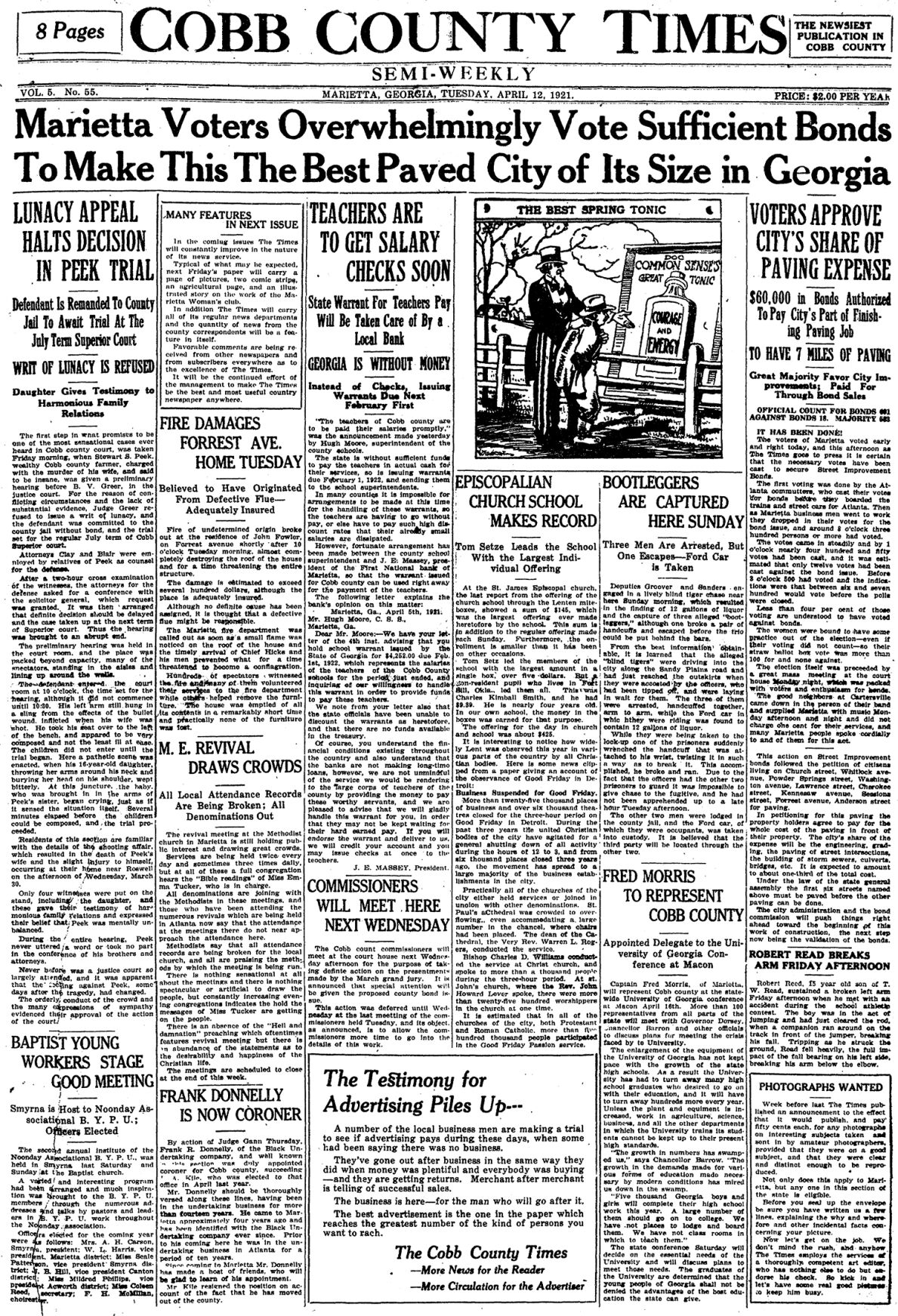 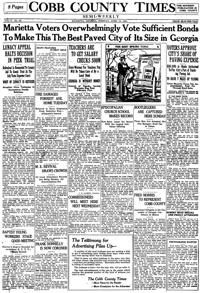 The Tuesday, April 12, 1921, edition of The Cobb County Times reported on “the first step” in “one of the most sensational cases ever heard in Cobb County Court.”

Stewart S. Peek, who was charged with the murder of his wife, had a preliminary hearing before Judge B.V. Greer the Friday before. Because of “conflicting circumstances and the lack of substantial evidence,” Judge Greer refused to issue a writ of lunacy and Peek was committed to the Cobb County Jail without bond. His trial was set for the July term of Cobb County Superior Court.

Prior to the shooting of his wife, Peek was reported in the March 11, 1921, paper as being “mentally unbalanced,” arming himself with a Winchester rifle and two revolvers before shooting at everyone who came in sight.

A fire broke out at the residence of John Fowler on Forrest Avenue shortly after 10 a.m. that day. The Marietta Fire Department was called out when small flames were spotted on the roof. Witnesses volunteered their services and removed all the contents of the house, resulting in no lost furniture as Chief Hicks and his men put out the fire.

Deputies Groover and Sanders engaged in “a lively chase” near Marietta the Sunday morning before, which resulted in the capture of 12 gallons of liquor and three bootleggers — although one broke a pair of handcuffs and escaped before the trio could be put behind bars.

The unexpected death of well-known Marietta resident Charles B. Willingham was also reported.

The Friday, April 15, 1921, edition of The Cobb County Times reported that the Cobb County Commissioners had authorized 133 payments at its regular semi-monthly meeting. The payments consisted of monthly compensation of all county officials and employees, and the bills accumulated by the county since the last settlement.

♦The Oak Grove section reported the death of Tom Jordan, 80, at Dr. Benson’s sanitarium, where he had been confined for a short time. Jordan was a Civil War veteran.

♦The Due West section reported that W.T. Kellogg had a mule stolen out of his barn and the other two let out the Monday before. The thief intended to burn the barn down by starting a fire between two bales of cotton and the barn wall.

The thief also went into the garage and cut all the wires on Kellogg’s automobile. He got busy the next morning and tracked the stolen mule down to Peters Street in Atlanta about half an hour after it had been brought in by the thief.

The Thursday, April 14, 1921, edition of The Marietta Journal reported that George E. Daniell and Frank McNeel attended the Georgia State Championship golf tournament held in Augusta the previous week. Both men did well in the qualifying rounds on the first day.

On the last day, a championship Handicap Tournament was played with 50 entries. Daniell scored 69 and won first prize and McNeel came in second with 68.

Upon returning home, the men’s silver cups were put on display in the windows of Daniell’s Jewelry Store.

In the “News From Our Correspondents” column, the Powder Springs section reported that the Sunday night before while at church, C.T. Leake’s Ford was stolen from in front of the Baptist Church. Will Leake heard the car start off and as soon as he could get to his own car he gave chase.

The driver ran the stolen car into a ditch near Brownsville. The man went to a nearby house where he procured a lantern and upon his return to the car, he saw Will’s approaching car and chose to flee. The identity of the car thief was unknown.

Firemen were reported in the Tuesday, April 13, 1971, paper as having passed up some fires to get to others as about 60 grass, woods and brush fires sent every available man scurrying from one end of the county to the other. An estimated 410 acres were burned and thousands of additional acres were threatened when light winds, combined with generally dry conditions and low humidity, created a virtual “tinderbox” in the county.