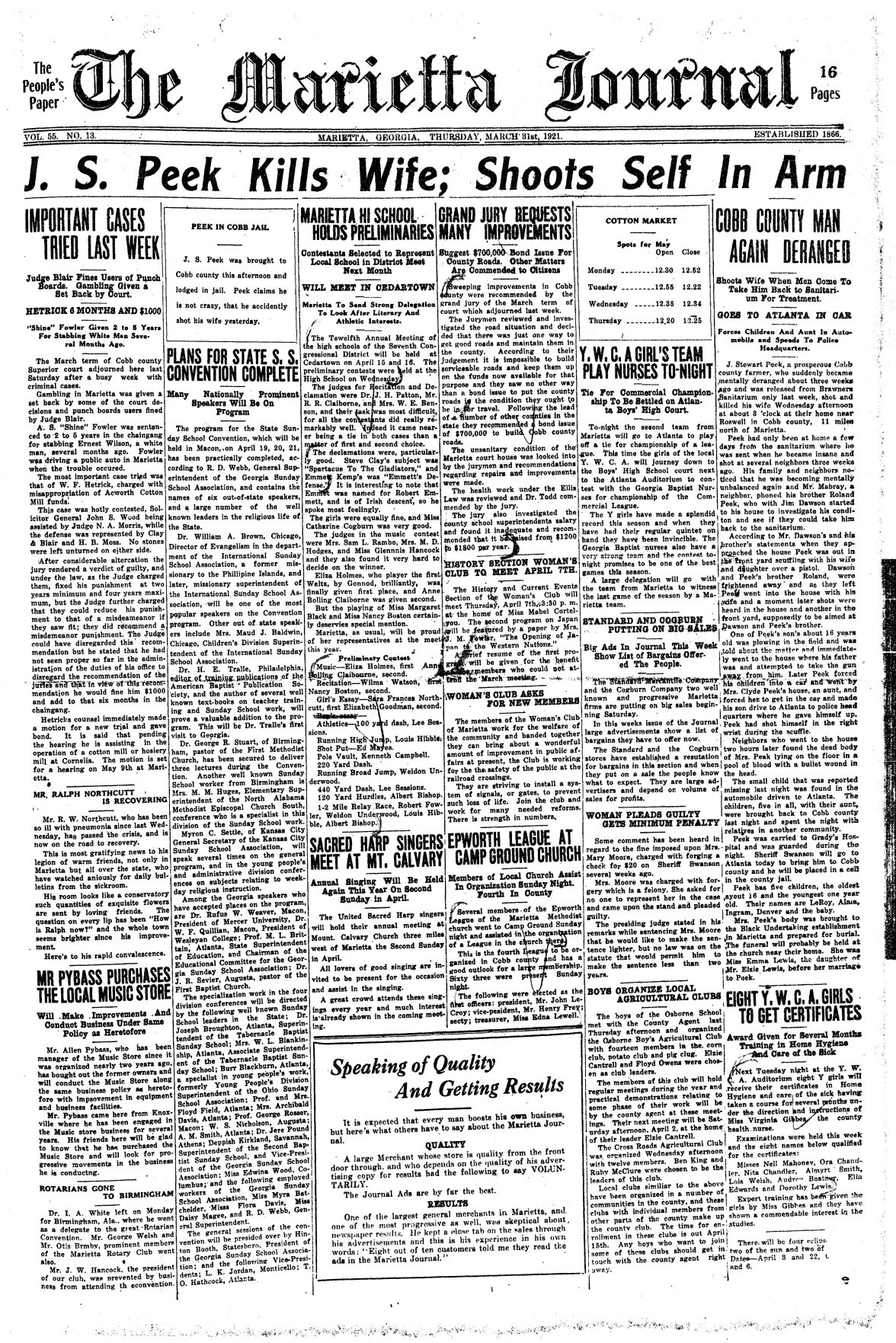 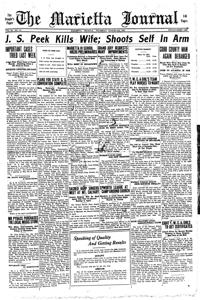 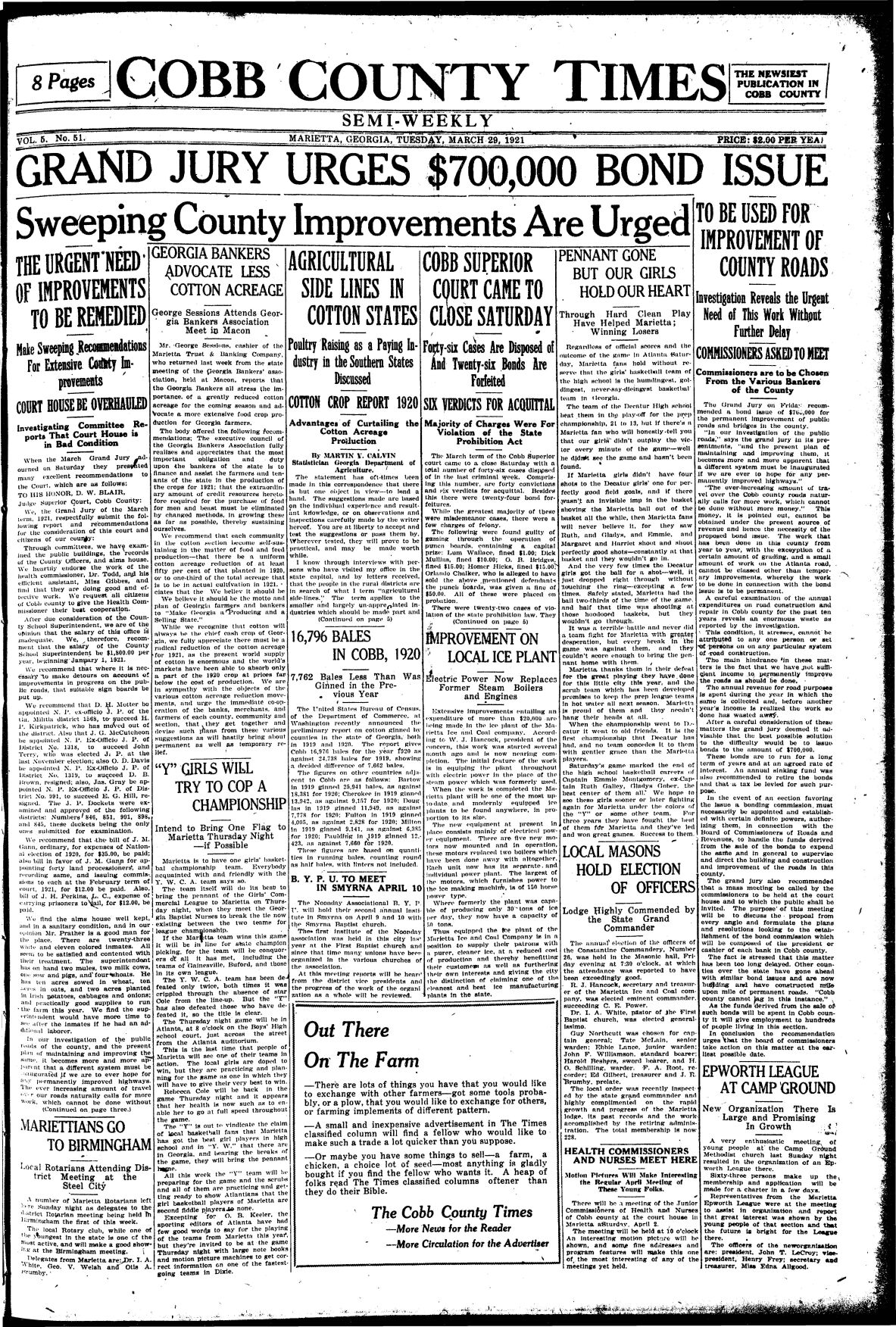 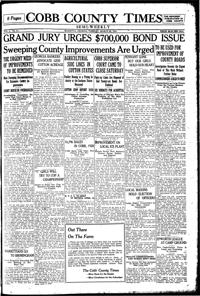 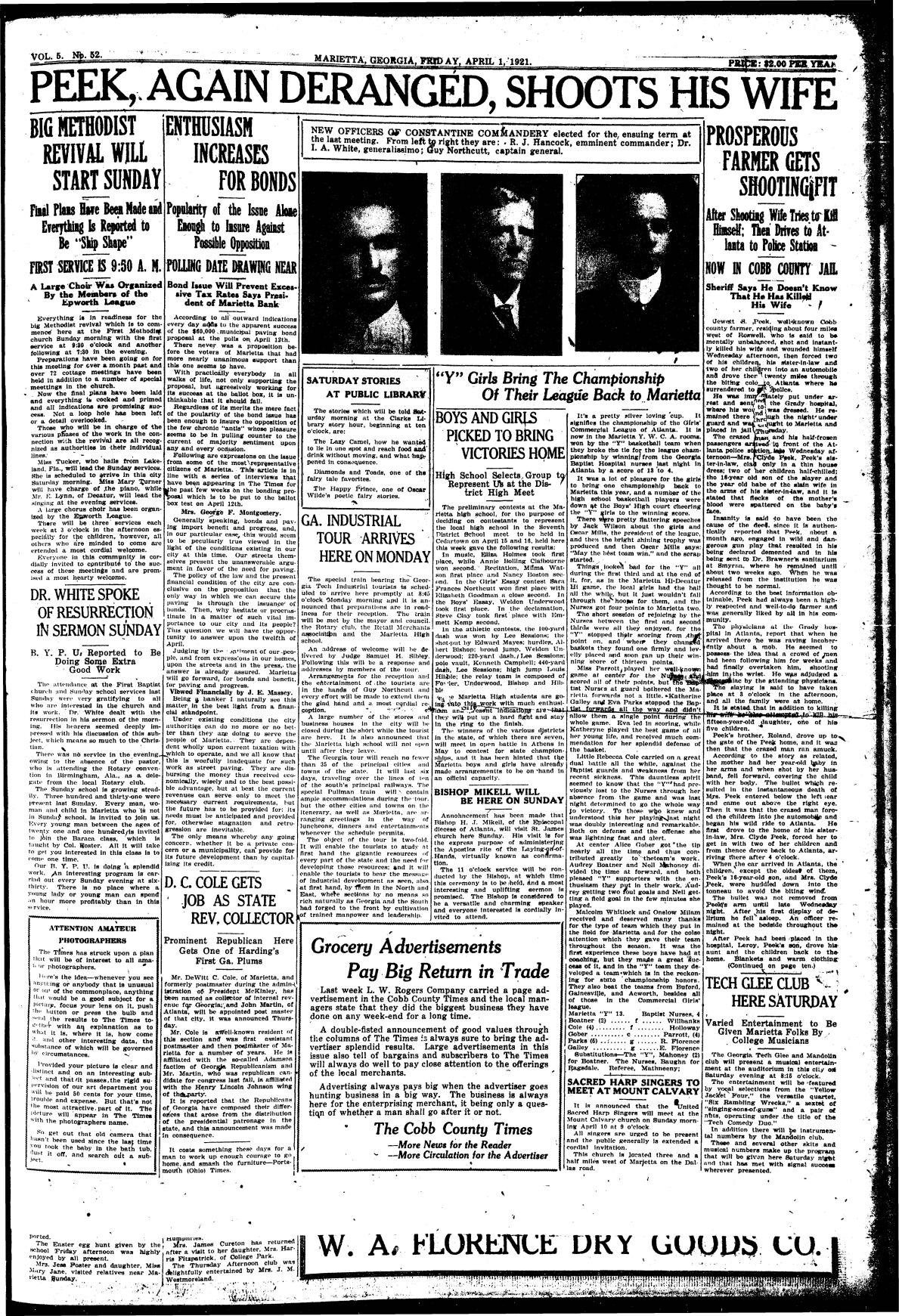 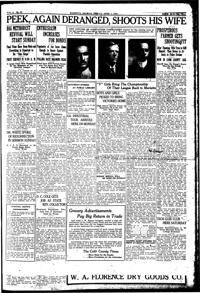 The Tuesday, March 29, 1921, edition of The Cobb County Times reported that the Grand Jury recommended the Friday before that a bond of $700,000 be issued for the permanent improvement of public roads and bridges in the county. A careful examination of the annual expenditures on road construction and repair in Cobb County for the past 10 years revealed “an enormous waste.”

Extensive improvements totaling over $20,000 were reported as being made in the ice plant of the Marietta Ice and Coal Company. W.J. Hancock, president of the company, said that the work started several months earlier and was nearing completion. The main feature of the work was replacing the company’s steam power with electrical power. Once finished, the plant would be “one of the most up-to-date and modernly equipped ice plants to be found anywhere.”

The equipment consisted of five new mounted motors that replaced two boilers. The largest of the motors provided 150 horse power to the ice making machine. This increased the plant’s ice making capacity from 30 tons per day to 50 tons.

The Friday, April 1, 1921, edition of The Cobb County Times reported that Jewett S. Peek, a well-known Cobb County farmer living four miles west of Roswell, became “mentally unbalanced,” shot and instantly killed his wife and wounded himself the Wednesday before. Peek also forced his two children, his sister-in-law and her two children into an automobile and drove them 20 miles through “the biting cold” to Atlanta where he surrendered to police.

Peek was put under arrest immediately and sent to Grady Hospital to have his wounds dressed. The next morning he was shipped under guard back to Marietta and placed in jail.

The “crazed man and his half-frozen passengers” arrived in front of the Atlanta police station with the sister-in-law clad only in a thin house dress and holding Peek’s year-old baby in her arms. The child was reported as having flecks of the mother’s blood still splattered on its face.

On March 11, 1921, Peek was reported as becoming “mentally unbalanced” and arming himself with a Winchester rifle and two revolvers before shooting at everyone who came into his sight. Peek, whose name was initially reported as Peak, later surrendered to Sheriff Swanson and was taken to Brawner’s sanitarium.

Peek had been released for two weeks before he shot his wife.

In the “News From Our Correspondents” column, the following items appeared:

♦ In the McAfee section, it was reported that a hail storm hit the Friday before and “some stones were as large as partridge eggs.”

♦ In the Due West section, Mrs. C.A. Kemp held the lucky ticket given out by Miller’s Dry Goods store and won a 42-piece dinner set for free.

The Thursday, March 31, 1921, edition of The Marietta Journal had the following comments on the times from the editors on the Editorial Page:

♦ “The number of robberies and holdups reported to have been the work of mere boys, seems to indicate that there is still room for Sunday school expansion in this country.”

♦ “Fertilizer men, as well as farmers, have suffered severely by the decline of cotton from 40 to 10 cents. Indeed it would be hard to find any man, or any business in the whole south, that the slump did not strike a heavy blow.”

In the “News From Our Correspondents” column, the Mt. Calvary section reported on the March 24, 1921 death of Tom Daniell, 21, who was struck and killed by lightning in his parents’ barn. Ernest Barfield, Herman Smith and Lee Alexander had just driven two mules into the barn out of the rain as Daniell came from the house to the barn. The three surviving men were said to have been “badly shocked” and the two mules killed.

In the Thursday, March 28, 1946, edition of The Marietta Daily Journal it was reported that 2nd Lt. William Harvey Humlong Jr., 21, son of Col. and Mrs. W.H. Humlong Sr., who had just moved to Marietta from Dallas, Texas, was killed on March 19, 1946 in an airplane crash in Formosa. Lt. Humlong was piloting an Army B-17 from Shanghai, China to Manila in the Philippines when the crash took place. Nine people died in the crash, including Gen. H.L. Parker. Lt. Humlong was buried with military honors on March 22, 1946 in Manila.

The search for three boys believed to have drowned the day before near Powers Ferry bridge was reported in the Monday, April 1, 1946, paper as being assisted by Cobb County police. An unidentified man and woman said they saw the boys’ boat capsize in turbulent waters on the Chattahoochee River. Both Cobb and Fulton police were searching for the bodies. No trace of the trio or their boat had been found.