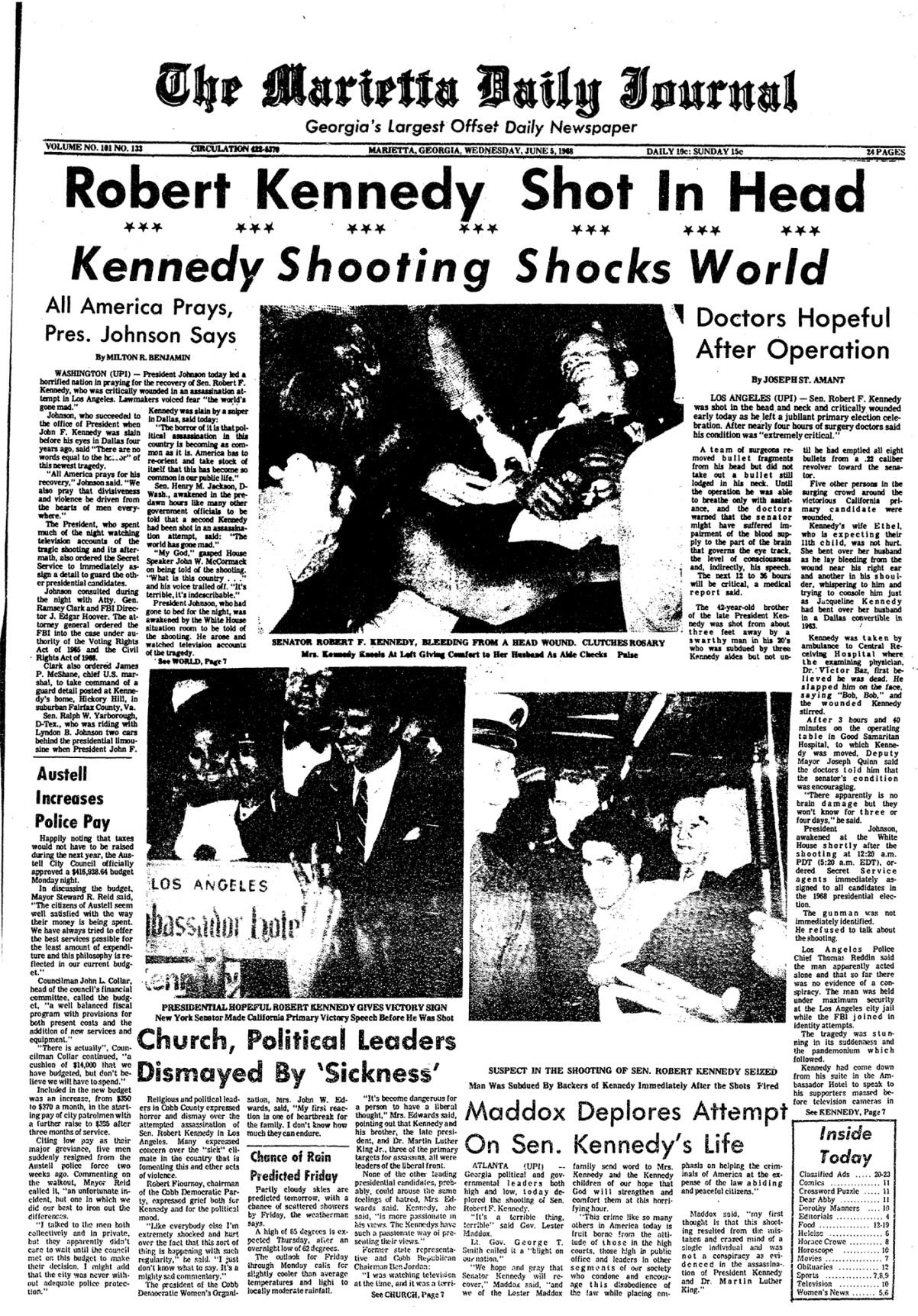 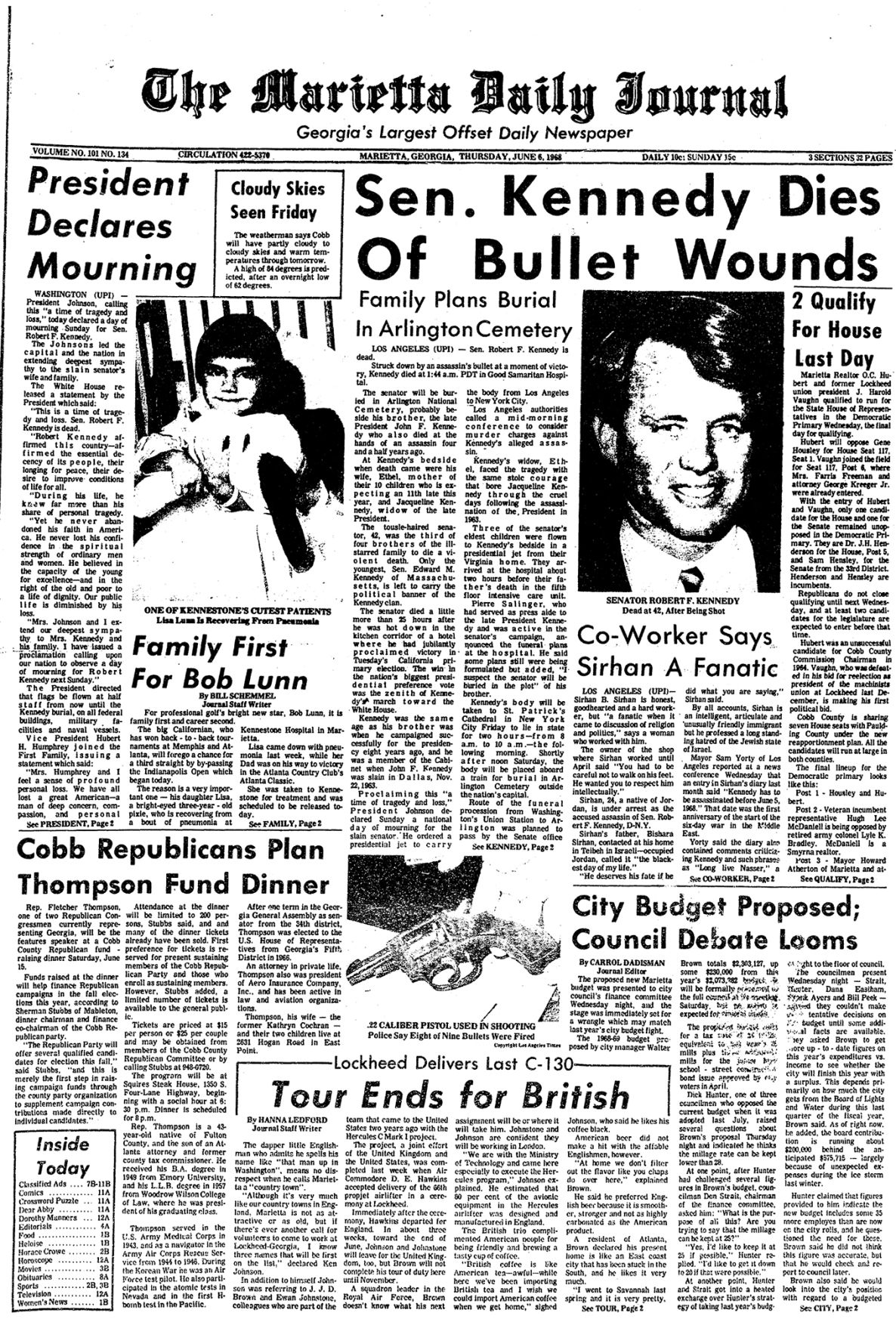 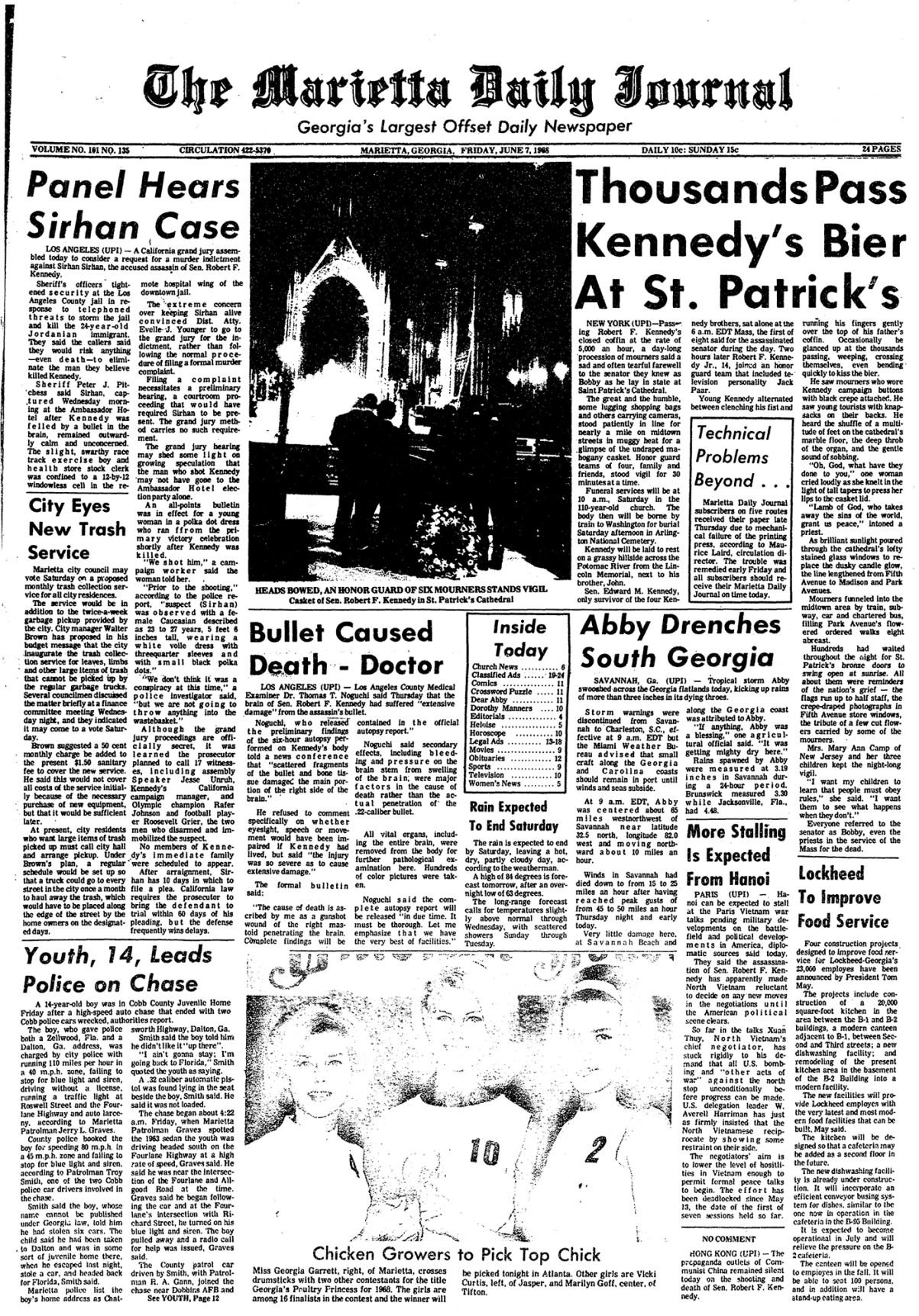 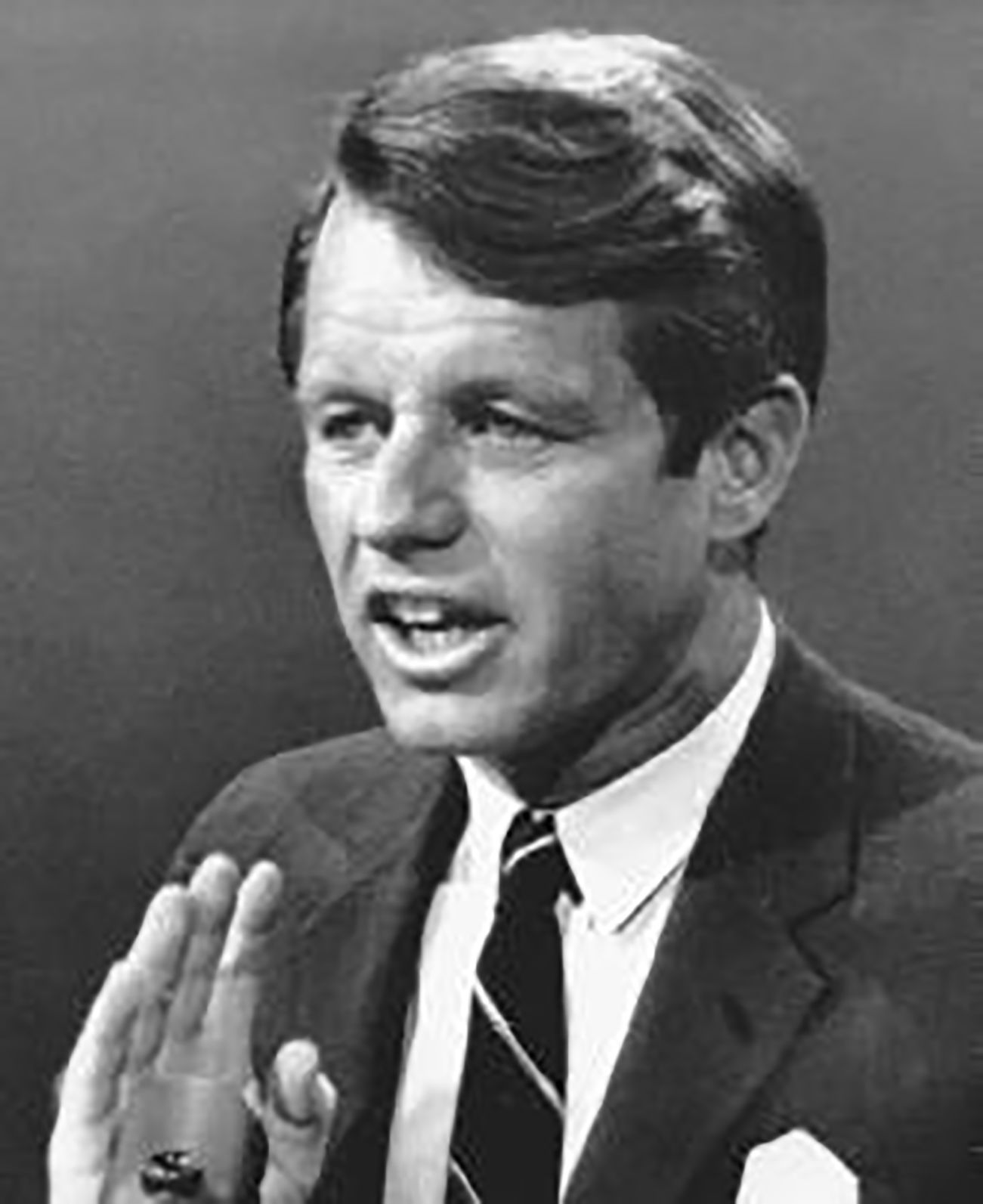 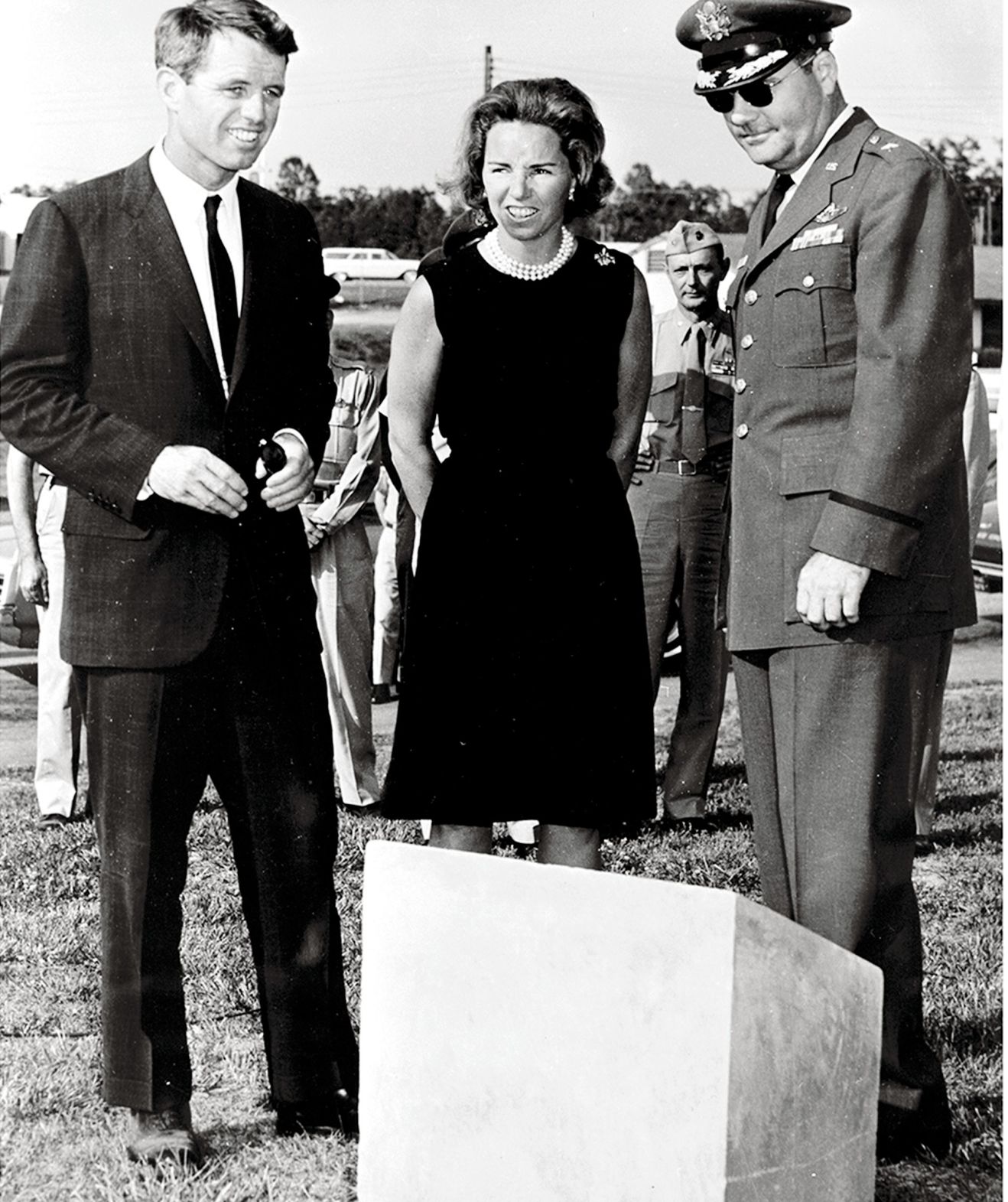 "Attorney General Robert F. Kennedy made two stops in Cobb" and "on the second one laid a wreath at a magnolia tree dedicated to his brother," the late President John F. Kennedy, according to the May 27, 1964, edition of the Journal. Show are Robert and Ethel Kennedy with Gen. George H. Wilson, commander of Dobbins Air Force Base, at Dobbins in 1964.

The photo appears on page 114 of the Journal's "History in Focus: A photo collection of Cobb County's past." The image was courtesy of Marietta Museum of History.

Five decades have not healed the wounds.

Fifty years ago, while still grieving the assassinations of President John F. Kennedy in 1963 and civil rights leader Dr. Martin Luther Jr. in 1968, the nation faced tragedy once more.

Many in the country wept when it was announced that Sen. Kennedy, critically shot in the head and neck from three feet away by Sirhan B. Sirhan, died from his injuries. The shooting was even more tragic because his wife, Ethel, was pregnant at the time with their 11th child.

Sen. Ralph W. Yarbrough, D-Texas, who rode two cars behind President Kennedy’s limousine when he was slain by a sniper, said about Robert Kennedy’s killing: “The horror of it is that political assassination in this country is becoming as common as it is. America has to re-orient and take stock of itself that this has become so common in our public life.”

Local reaction to the shooting

The Journal’s editorial on Wednesday, June 5, 1968, prior to the announcement of Sen. Kennedy’s death, said:

“Who can express the emotions of Americans today? Shock, confusion, bewilderment, anger, even unbelief don’t seem adequate any more to capture reaction to the news that another national leader has been shot by a would-be assassin. …

Obviously, most Americans are stunned and saddened. Obviously, political friends and foes alike feel genuine sympathy for Sen. Robert F. Kennedy and his family. Obviously, the bullet is not the American way and no one in his right mind advocates violence as a means of acting on political differences. But where do we go from there? What is there in our society that produces three attempts on the lives of American leaders in less than five years? And what can we do to prevent still more assassination attempts as we go into a full-fledged campaign for the presidency with all the crowds it will bring?

These are questions all Americans must seriously consider when they recover from the initial shock of another shooting. At the least, it seems, better protection must be provided for the presidential candidates: President (Lyndon B.) Johnson’s order for Secret Service men to accompany each candidate along the campaign trail is a step in the right direction. Yet, if a man is determined to kill another, no protection can be completely effective.”

Georgia Gov. Lester Maddox “deplored the shooting” and said it was “a terrible thing, terrible.”

He was also quoted as saying that “this crime like so many others in America today is fruit borne from the attitude of those in the high courts, those high in public office and leaders in other segments of our society that condone and encourage this disobedience of the law while placing emphasis on helping the criminals of America at the expense of the law abiding and peaceful citizens.”

Lt. Gov. George T. Smith called the shooting “a blight on our nation.”

“Like everybody else I’m extremely shocked and hurt over the fact that this sort of thing is happening with such regularity,” said Robert Flournoy, the chairman of the Cobb Democratic Party. “I just don’t know what to say. It’s a mighty commentary.”

“It’s become dangerous for a person to have a liberal thought,” said Juanelle Edwards, president of the Cobb Democratic Women’s Organization, referring to the fact that Sen. Kennedy, President Kennedy and Dr. King “all were leaders of the liberal front.”

Former state representative and Cobb Republican chairman Ben Jordan was watching television at the time of the shooting.

“This violence is something that all Americans should be concerned with,” Jordan said. “The country is so torn asunder that people have no regard for law and order.”

Judge Norman Shipley, judge of the juvenile court and also treasurer of the Cobb Democratic Party, agreed with Jordan. He said that this was “another outward sign of the loss of law and order in this country” and blamed recent Supreme Court rulings for a part of the loss of respect for the law.

“We’re doing everything possible to turn criminals and murderers loose and removing the protection for the victim which the law always has provided,” Shipley said.

Superior Court Judge Conley Ingram said the shooting was part of “an overall failure of mankind to seek peaceful means to settle disputes.”

“Hopefully, we’ll mature as a people someday,” Ingram said. “We must come to learn to live under the law.”

Marietta Mayor Howard Atherton was reported as blaming extremism on both the right and left for the overall mood of the country and the attack on Sen. Kennedy.

“The people who would do this sort of thing have always been with us,” Atherton said. “But, we’re somehow creating a climate that makes them dare to come out in the open.”

The Journal’s editorial on Thursday, June 6, 1968, ended with the following,

“Whatever the rationale by which the assassin acted, it was a senseless, horrible act which all responsible Americans condemn. Not only has tragedy visited the Kennedy family and the nation again. Not only has the ugly face of violence been dramatized in the most sobering manner. The nation also has lost an able man and an effective spokesman for the causes in which he believed.”

Journal staff writer and columnist Bill Schemmel wrote at the end of his column that day,

“There is a terrible sadness, I think, in the fact that the shooting of Sen. Kennedy does not have the power to shock us into numbness and disbelief as the assassination of President Kennedy did. We have become so accustomed to such violence that it now almost seems in the natural order of things.”

If you are interested in learning more about the stories that were presented in this week’s column, you can search the newspaper’s digitized microfilm archives at http://nl.newsbank.com/nl-search/we/Archives/?p_product=HA-MDJ&amp;p_theme=histpaper&amp;p_action=keyword. NewsBank, which hosts the archives for the Marietta Daily Journal, charges a fee for retrieved articles and has various price packages. If you have any trouble with your username, password or payment options, please contact NewsBank at mariettadaily@newsbank.com.

MDJ Time Capsule: The Week of May 31

MDJ Time Capsule: The Week of May 24

MDJ Time Capsule: The Week of May 17

MDJ Time Capsule: The Week of May 10

This week’s Time Capsule looks at a car accident, a murder, World War I events, a strike, Lurleen B. Wallace, Lady Bird Johnson and a drug raid.

This week’s Time Capsule looks at the Strand Theatre, a pair of tragic deaths, an Army truck accident, World War I events, the Poor People’s C…

This week’s Time Capsule looks at the Men’s Patriotic League of Marietta and World War I events, a bear, ice cream vendors and E. coli at Whit…