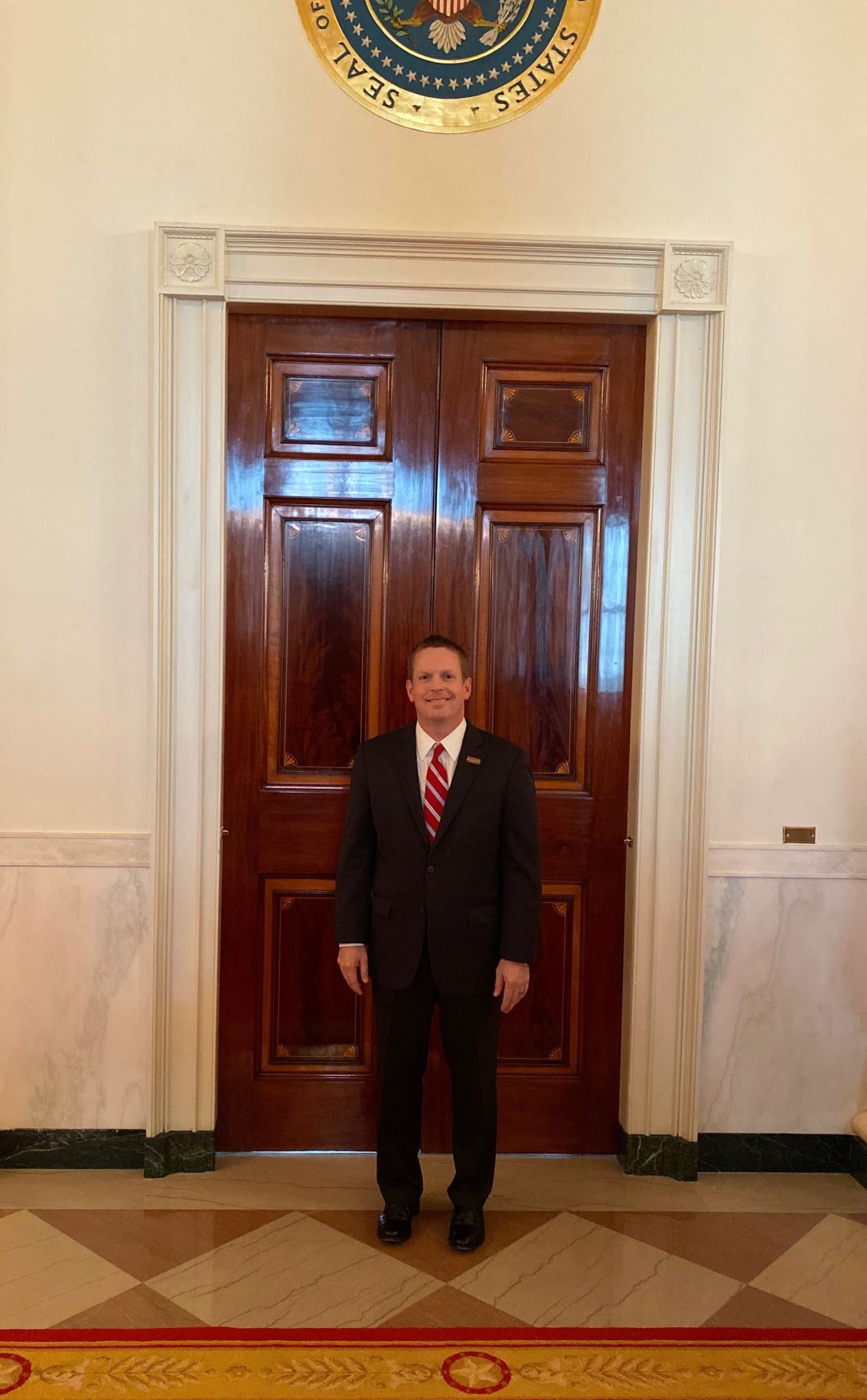 Smyrna Mayor Derek Norton stands under the presidential seal in the east wing of the White House. 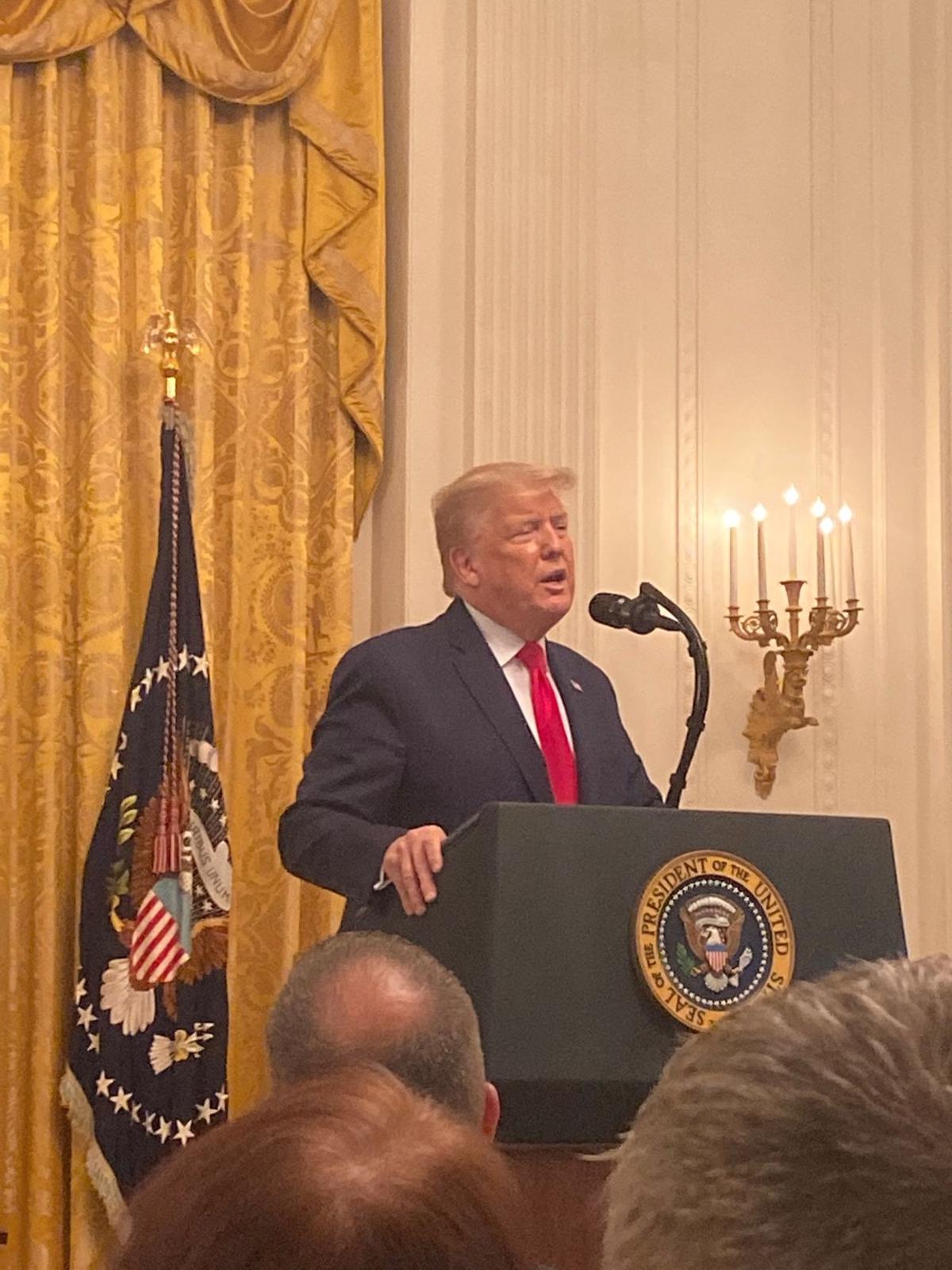 President Donald Trump speaks during a meeting of 150 mayors at the White House on Friday. The event, called “Discussion with the Nation’s Mayors on Transforming America’s Communities,” also featured remarks from members of the president’s cabinet.

The program gets underway in the east room of the White House. 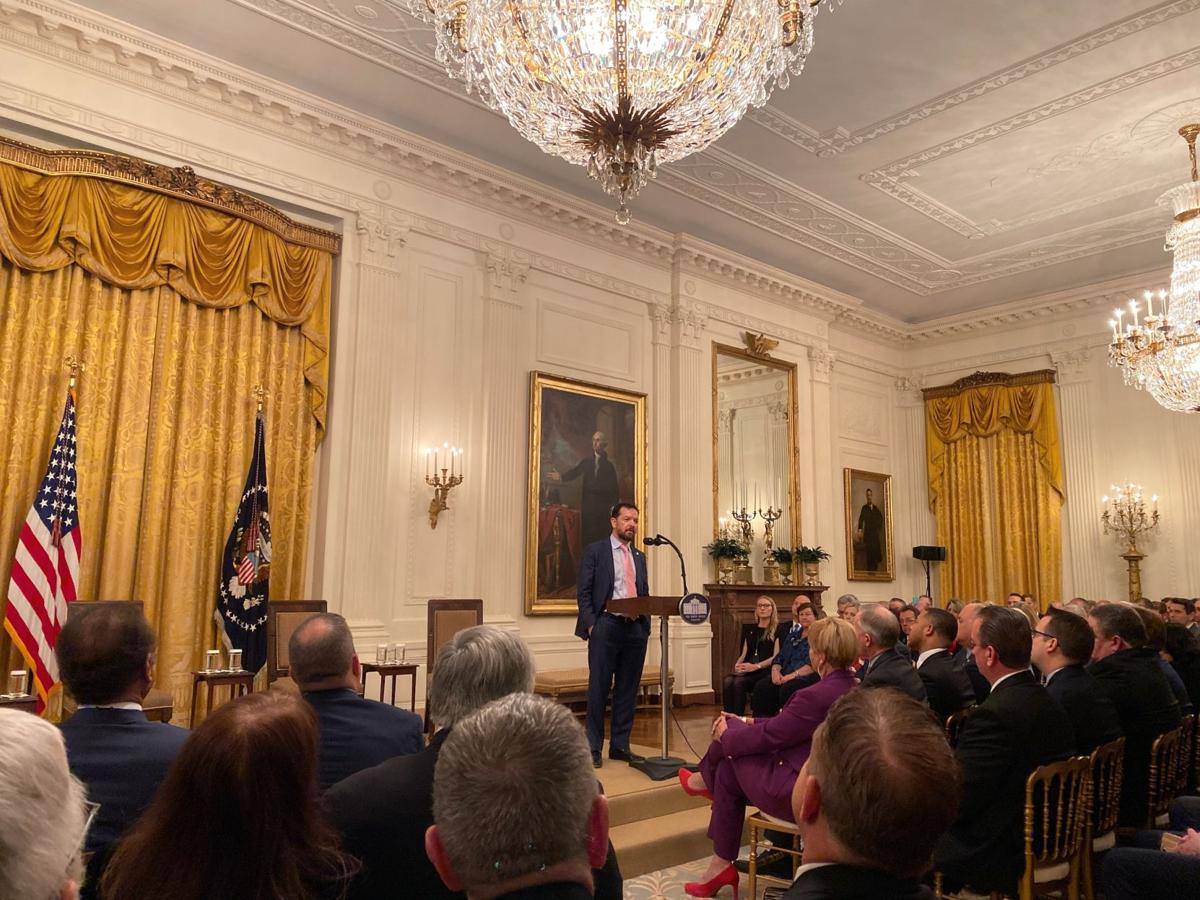 Joe Grogan, assistant to the president and director of the domestic policy council, speaks to a crowd of more than 150 mayors.

Smyrna Mayor Derek Norton stands under the presidential seal in the east wing of the White House.

President Donald Trump speaks during a meeting of 150 mayors at the White House on Friday. The event, called “Discussion with the Nation’s Mayors on Transforming America’s Communities,” also featured remarks from members of the president’s cabinet.

The program gets underway in the east room of the White House.

Joe Grogan, assistant to the president and director of the domestic policy council, speaks to a crowd of more than 150 mayors.

Businessman Fitz Johnson of Smyrna says he’s been a public servant all his life, so when the opportunity to run for a seat on the Cobb Board of Commissioners came open, he viewed it as an extension of what he’s already been doing.

Johnson said he will run in the May 19 Republican primary for the seat held by retiring east Cobb Commissioner Bob Ott. Three others are known candidates for the post.

“The work that the commissioner does is closest to the people, and that’s where I want to be,” Johnson said. “I want to continue to make Cobb County the best county in the state to do business, to educate our children, to make sure we have the best services that the state has to offer, have intelligent growth as we move forward as a county, and our constituents deserve it. And I’m willing to work, I have a passion for it and along with a passion, I have the time to put forth to do it, to do this job and to do it right.”

A retired businessman, Johnson has experience in leading companies and nonprofits. He also served 21 years in the Army and is an active member in the community, having served on several boards, including the Kennesaw State University Foundation Board of Trustees, the Cobb Hospital Authority, the Town Center Community Improvement District and the WellStar Health System Board of Trustees. He is an active member of the Cobb County Chamber of Commerce.

In 2014, he ran for state school superintendent.

As with other candidates, Around Town asked him about some hot button issues concerning east Cobb.

Q: Do you believe east Cobb should become a city?

A: Well, you know when we look at east Cobb, there’s so much to be heard. First of all, they’ve moved that to the 2021 agenda, so I’m anxious to learn on both sides: those that are opposed and those that are for it. I’m anxious to learn more about what’s going to happen on both sides. But I understand, too, that the residents of east Cobb are the ones that are going to make that decision, and I want to be, as the commissioner of District 2, I’m going to support whatever decision they make. I will still be the district commissioner, and I will do everything to support them, but I do understand that seems to be one of the issues that the constituents of District 2 are going to have to deal with.

Q: Do you support MARTA rail coming into Cobb County?

A: When you look at MARTA, that is a hot topic for our whole region. There are associated costs that are tied to that. We want to make sure that we are fiscally responsible. Whatever we do, one of the first things I’m going to look at is us being fiscally responsible as a county. That means keeping our taxes low in the region. That means making sure Cobb County has the best services in the state and that comes along when you talk about MARTA, that comes into that. That’s one of the things we have to study because it is expensive. We have to understand that MARTA right now, the closest rail to District 2 is seven or eight miles away from Cumberland, and there is a cost to build that up to us from Cobb County. And that cost, I’ve looked at some of the reports, is close to a billion dollars with a B. So we’ve got to make sure that’s going to be online, and we would have to work with the city of Atlanta, the ARC very feasibly to make sure that would happen. So you’ve got a lot of work and a lot of study to do that, to look at that.

A: That’s another hot topic down here and I live, as you know, down in Smyrna. I’ve been watching that closely and I want to give some kudos to Bob Ott for jumping right into that. ... We have to make sure we’re educated and understand what it is they are emitting and what it is that’s happening down there and take that education in learning more about it. And I think they did the right thing in saying let’s shut it down and make sure we’re doing the right thing.

Q: Chairman Mike Boyce has indicated he will bring a transit referendum after the county SPLOST referendum is voted on this fall, which could raise the sales tax from 6% to 7%. Is that a good idea?

A: The discussion around the 1% sales tax is a 2022 issue. We’re going to have — what? — two new commissioners by then? Hopefully I’m one of them. God willing. And so what we have to do is I would like to say we’re going to make sure we get the 2020 SPLOST passed, and as we look out that far, and that’s what we need to do as commissioners, look out into the future, and make sure we can show what the SPLOST has done in the past. Has it been successful? And as we go forward we can look at the successes, hopefully not the failures, look at the successes of the SPLOST, and if that becomes an idea that the constituents of District 2 want to do, then we move forward with it. If it’s not ... again, as a commissioner, I’m representing the people, and I want to make sure that they are represented, I want to make sure the priorities in our district are aligned with the entire district as the safest place to raise your family, to do business, educate your kids, and to live and work and play.”

Johnson is a graduate of The Citadel and holds a master’s in education from Troy University, and a J.D. from the University of Kentucky College of Law. Johnson, 56, and his wife, Suzann Wilcox, have four children and three grandchildren. They are members of Cumberland Community Church. A former owner of the Atlanta Beat, Johnson serves as a community football, soccer, and wrestling coach.

Other candidates who have announced their intentions to run for District 2 commissioner include Republicans Andy Smith, whom Ott appointed to the Cobb Planning Commission and Lloyd “Shane” Deyo, a veteran and software consultant for Graphic Packaging International in Sandy Springs. On the left side of the aisle is Democrat Jerica Richardson, an Equifax employee who’s managed several political campaigns.

GOP activist Pamela Reardon told the MDJ on Friday she was running, but over the weekend changed her mind, citing her recent bout with cancer and her concern about the stress of the position on her health.

Qualifying for office is March 2 to 6. The general election is November 3.

Smyrna at the White House: Smyrna Mayor Derek Norton was one of 150 city leaders across the country who met at the White House on Friday as part of an event called “Discussion with the Nation’s Mayors on Transforming America’s Communities.”

Norton said he plans to implement some of the discussion points into city policy, where applicable.

Though he said he wasn’t close to star-struck — his work as a lobbyist for the Medical Association of Georgia has taken him to the White House before — Norton said he thoroughly enjoyed his trip.

“I don’t get too impressed with stuff like this, but that was a pretty cool (event),” Norton said. “To have that direct interaction with high-level administration officials, you know, it was really great to have that access. And just being with the other mayors and networking and talking about best practices on different issues across the country was very helpful.”

The mayor also said Smyrna’s inclusion in the event shows the city of around 60,000 residents is an up-and-comer that continues to gain national recognition.

“I think it shows that Smyrna’s on the map as a vibrant, growing city,” he said.