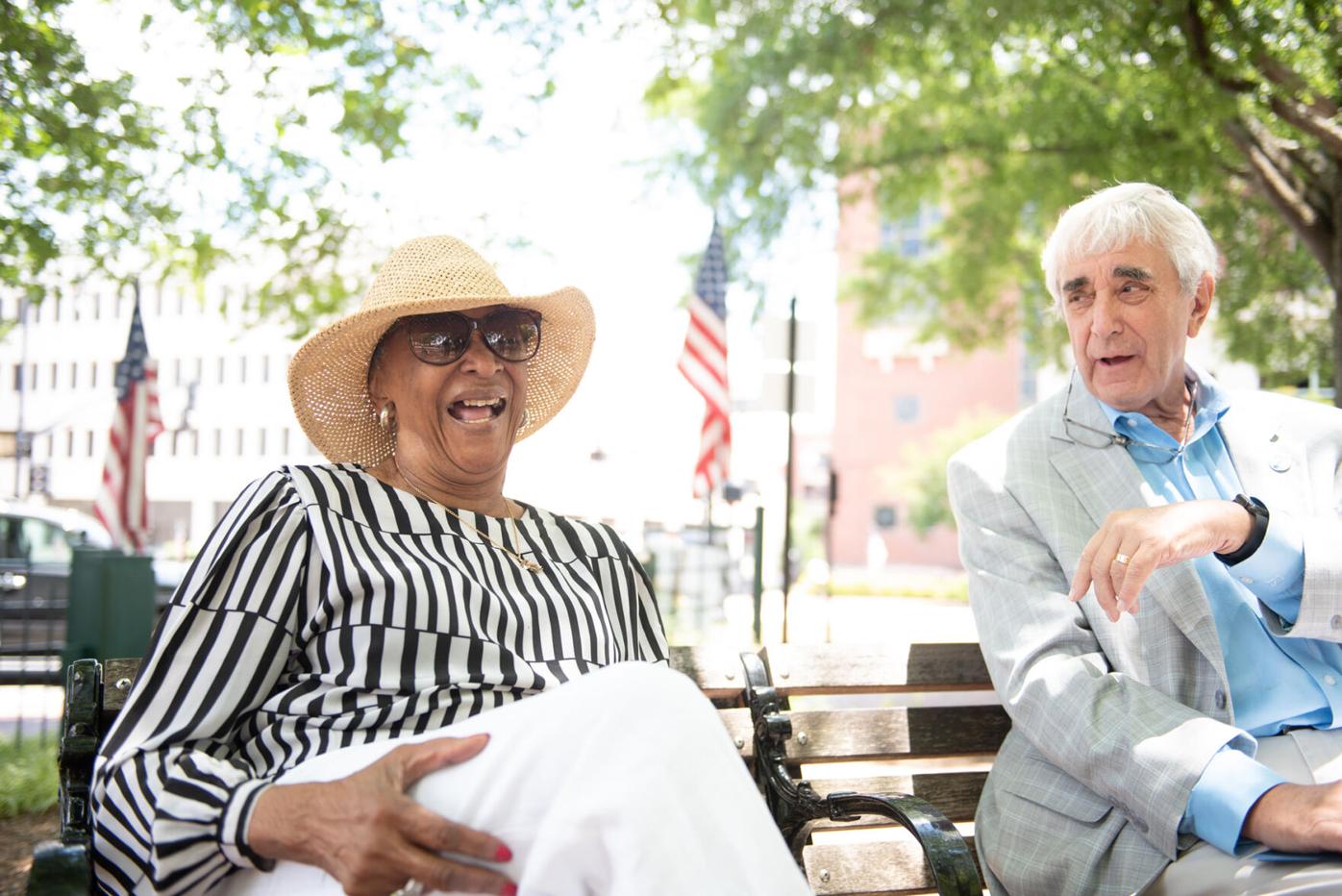 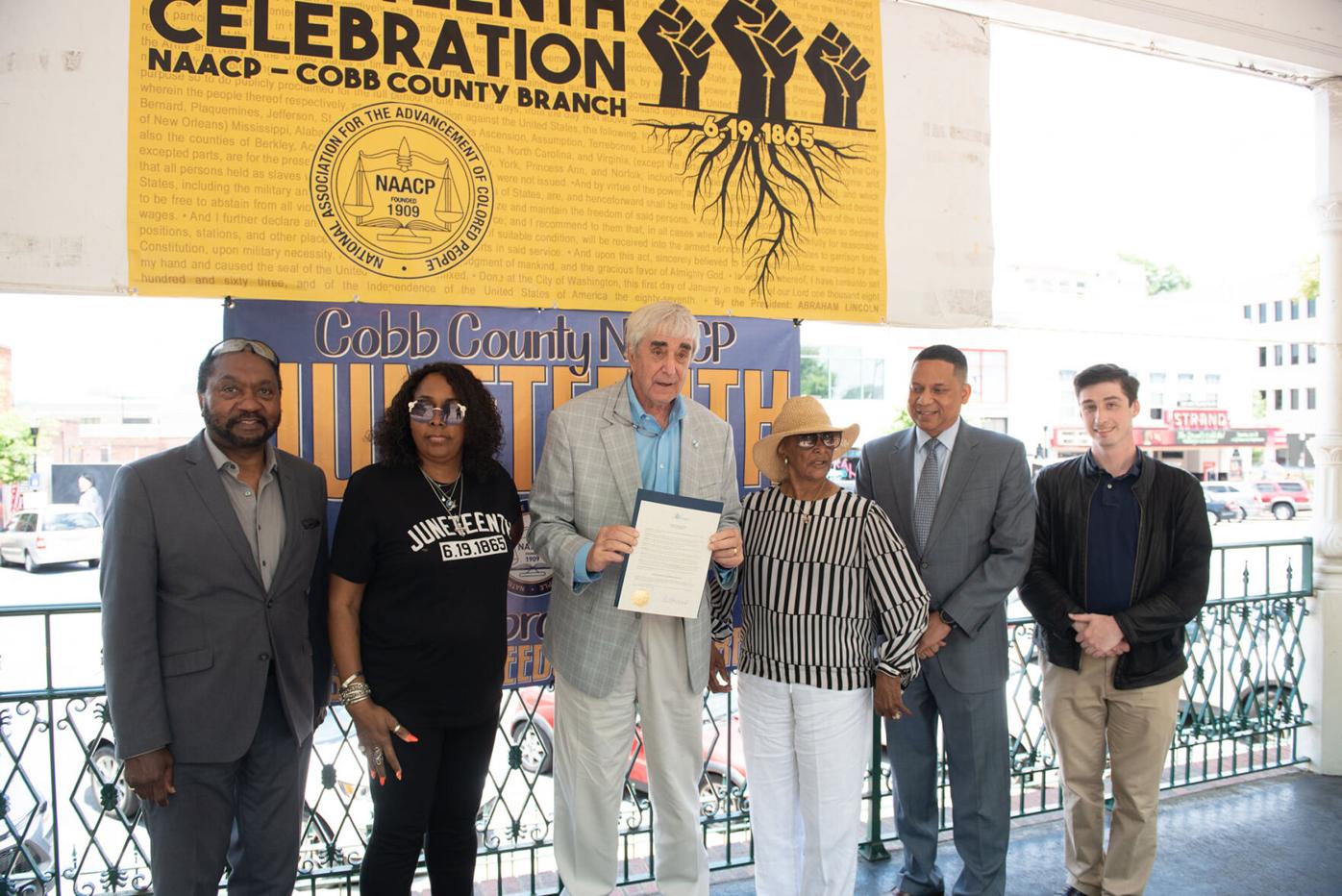 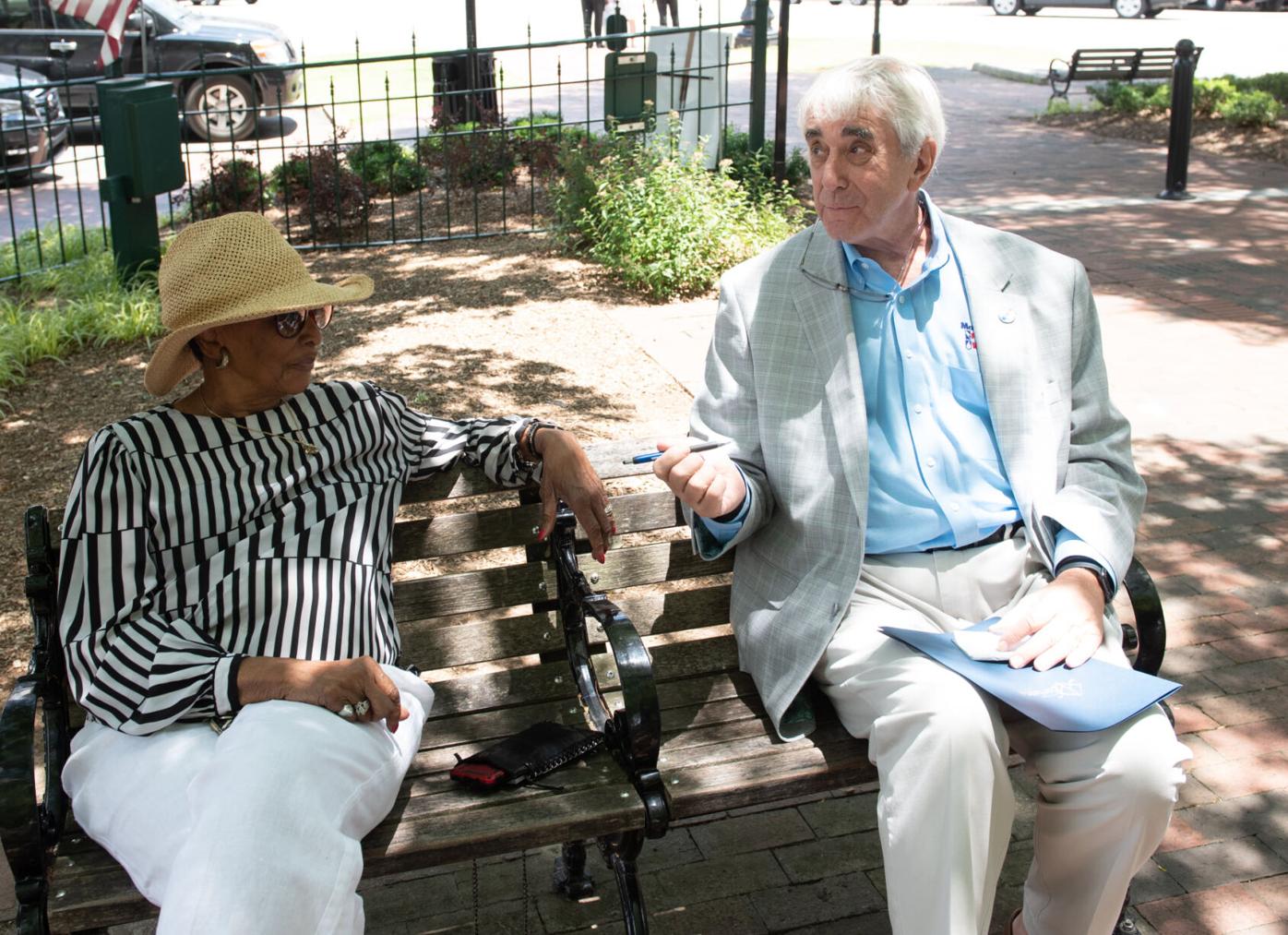 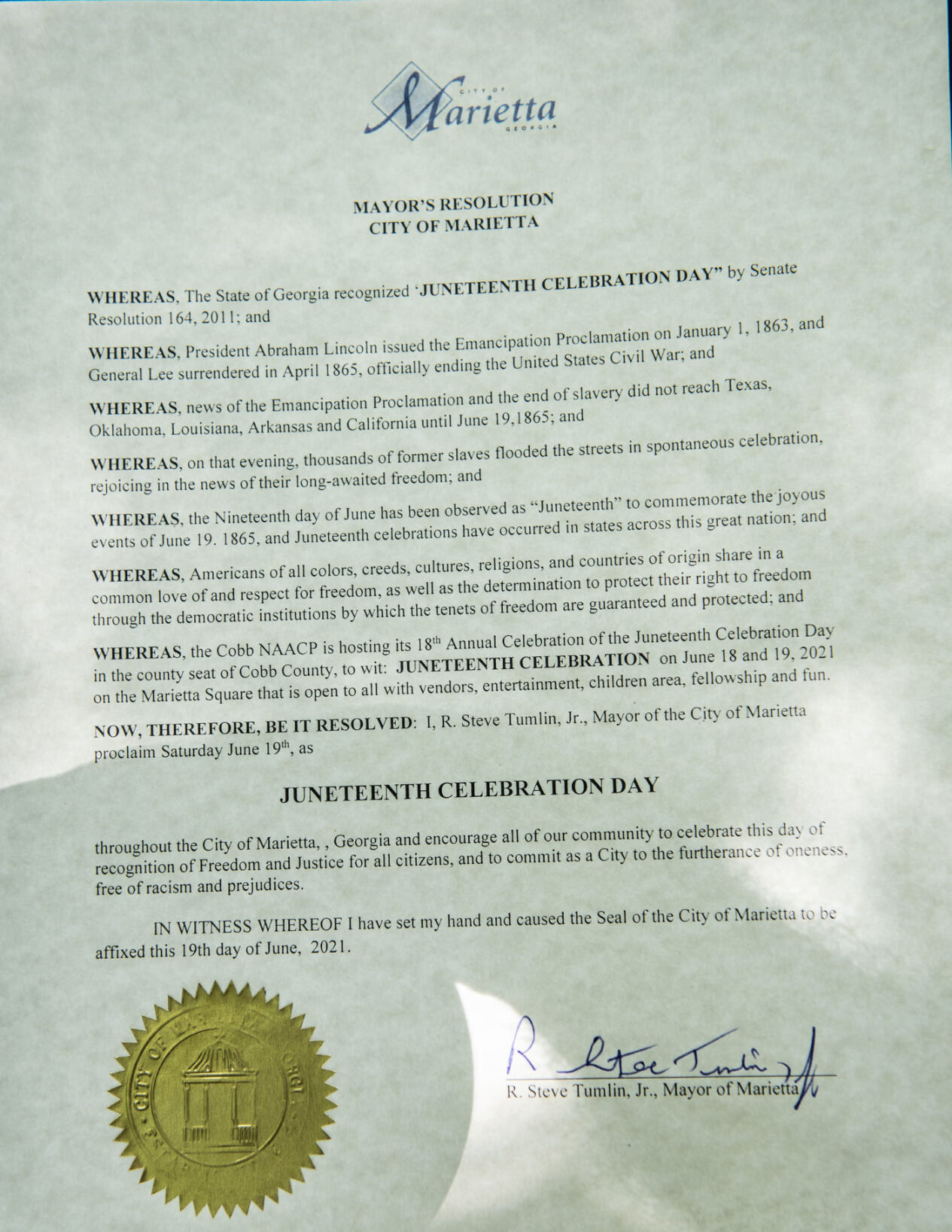 This week, Mayor Steve "Thunder" Tumlin and other dignitaries met with Cobb NAACP leaders to sign a resolution proclaiming Saturday as Juneteenth Celebration Day in the Gem City.

The Cobb NAACP is hosting its 18th annual Juneteenth celebration on Marietta Square over the weekend with vendors, entertainment fellowship and fun.

Hizzoner's resolution says President Abraham Lincoln issued the Emancipation Proclamation on January 1, 1863, and Gen. Robert E. Lee surrendered in April 1865, officially ending the Civil War. News of the Emancipation Proclamation and the end of slavery did not reach Texas, Oklahoma, Louisiana, Arkansas and California until June 19, 1865. On that evening, the resolution says, thousands of former slaves flooded the streets in spontaneous celebration, rejoicing in the news of their long-awaited freedom, causing June 19th to be observed as Juneteenth ever since.

"Americans of all colors, creeds, cultures, religions, and countries of origin share in a common love and respect for freedom, as well as the determination to protect their right to freedom through the democratic institutions by which the tenets of freedom are guaranteed and protected," Tumlin's resolution notes, declaring Saturday Juneteenth Celebration Day and encouraging "all of our community to celebrate this day of recognition of Freedom and Justice for all citizens, and to commit as a City to the furtherance of oneness, free of racism and prejudices."

THE BIGGER CHICKEN: News that the chicken under construction in Fitzgerald, Georgia will be taller than Marietta's Big Chicken is not going over well here.

As previously reported by the MDJ, the frame of a 62-foot tall chicken-shaped topiary, at least six feet taller than Marietta’s 56-foot Big Chicken at the KFC off Cobb Parkway, is slated for completion in eight to 10 weeks in tiny Fitzgerald (population: 8,800).

“But does the Fitzgerald, GA big chicken actually serve chicken?!! We think not!” the city wrote on Facebook last week.

In the wake of such grim news, Mayor Tumlin thanked the championship-winning Mt. Paran Christian School baseball team at a June 9 council meeting for bringing some positivity to the city.

Hizzoner has plans to defend our famed poultry beacon, however.

“Word is out were gonna find a 7-foot hat for our chicken," he said.

Councilman Andy Morris had another suggestion — why not give it some high heels?

DENSITY DEBATE: The approval by the Cobb Board of Commissioners this week of the Sprayberry Crossing redevelopment project continues to burn up east Cobb.

Opposition leader Tim Carini announced in the "ROD-1 Residents Against Apartments at Sprayberry Crossing” Facebook group Wednesday he’s rebranding the group the “Sandy Plains Community Coalition,” with two stated aims. First, to serve as an advocacy group to turn back the creeping menace of density. Second, to vote out Commissioner JoAnn Birrell next year.

But owner of the Sprayberry Bottle Shop Brij Patel, like any wise proprietor, knows his bread is buttered on both sides.

“Good news or bad news,” Patel wrote on Facebook after the vote, “Your local liquor store Sprayberry Bottle Shop still stands and will help you celebrate this big milestone or to help you drown your sorrows.”

FLIGHT SCHOOL: Earlier this week, we reported that in 2020, the Cobb County Board of Education approved relocating the district’s remedial high school into Dobbins Air Reserve Base’s Accident Potential Zone.

Department of Defense guidelines recommend schools not be placed within such zones, and it was recently brought to our attention that both airports and military installations are considered potential hazards by the Georgia Department of Education. The DOE further warns that schools should not be within 3 miles of any such airport, and certainly should not be placed in-line with the runway.

Readers may recall Cobb Horizon High School is located just over a mile from Dobbins. And yes, it’s right in line with the runway. Lt. Alan Abernethy, Dobbins spokesman, said the base “did express concern” to the school district over the school’s location, though he wasn’t sure who with Cobb schools received those concerns.

Which leaves Around Town to wonder where the fire and brimstone raised over the Leland Drive condominium complex was last spring. Does the chorus wish to weigh in on this move, incanting the specter of base closure and economic ruin? So far, it’s been crickets.

SUNSHINE LAWS: With the announcement that the Cobb School District’s special review will begin in August, the MDJ had some new questions this week for Mark Elgart, president and CEO of Cognia, the district’s accreditation organization that will be conducting the investigation.

At first, it seemed the MDJ would not be granted a Zoom or phone interview, as have been the channels of choice in the past. Send an email, spokesperson Mariama Tyler said, and we’ll get your answers to you. But shortly after, and consequently in the middle of a tug of war between the MDJ and Cognia for certain documents, Tyler informed the paper neither Elgart nor the organization in general would be granting any further interviews for the time being.

Tyler cited the impending Cobb review and the one already taking place in Gwinnett County.

While it’s true Elgart and his organization don’t answer directly to the taxpayers and voters in Cobb County, the nonprofit does receive quite a bit of taxpayer money in the school district’s payments for accreditation services (Cobb Schools pays Cognia $133,200 per year, and it paid an additional $70,000 in the 2019-20 school year, the last year the regular accreditation review took place).

Melton, who was appointed to the state’s high court in 2005 and served as the executive council to former Gov. Sonny Perdue, is retiring from the court effective July 1. To register for the event, visit https://ccrwc.org/product/luncheon-ticket/.

The luncheon will also be the setting for the awards of three, $1,000 scholarships from the Babe Atkins Byrne Scholarship fund. One of the scholarships will be in memory of long time CCRWC member Sharon Herndon, who taught in Cobb Schools and worked at the Cobb Courthouse for many years. To make a donation in memory of Herndon, visit: ccrwc.org/product/babe-atkins-byrne-scholarship-fund/.

TOWN HALL: Councilman Joseph Goldstein will be hosting a Ward 7 town hall meeting at 6:30 p.m. July 1st. The meeting will be held at the Sewell Mill Library and Cultural Center, 2051 Lower Roswell Road, Marietta. Representatives from public safety, public works and code enforcement will be there to answer questions.

"The heart of a father," said Abbé Prévost, "is the masterpiece of nature."

Around Town wishes you and yours a Happy Father's Day.