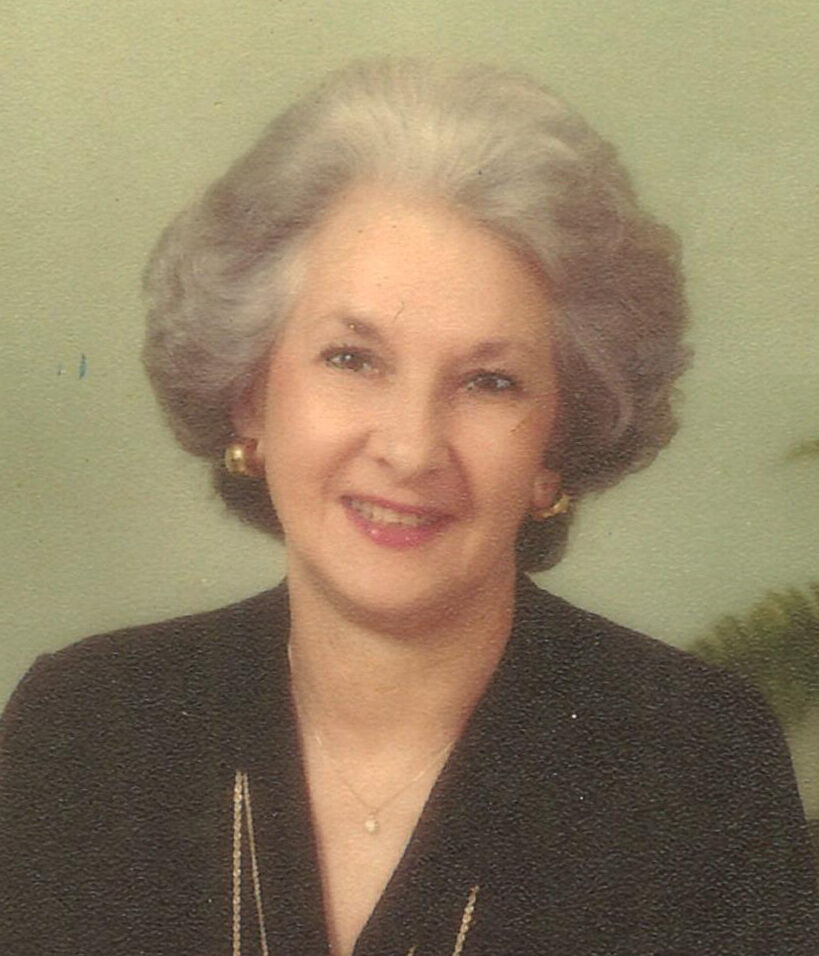 Bebe Moor Meaders passed away peacefully on July 15 at home, surrounded by her loving family at the tender age of almost 100. She is survived by daughters Connie Kone (John) of Marietta and Susan Young (Gary) of Savannah, many loving nieces, nephews, and their families. Bebe was born on January 19, 1922 in Waycross, Georgia to Ruby Shimgler and George A. Moor. They moved to Marietta in 1924, and was the first family to settle on Moor Street, now known as Chicopee Drive. She had one sister, Emily Moor and two brothers, Talley and George Moor. After graduating in the 1939 class of Marietta High School, she attended Georgia State College for Women, then worked in the Dean's Office at Emory University. During WWII, she served in the American Red Cross at Parris Island, South Carolina. Bebe married Dr. H. D. (Speedy) Meaders in 1949. They moved to Newnan, Ga., where he began his OB GYN practice. In 1953, they moved to Marietta to their wonderful neighborhood on Seminole Drive, where they lived for 65 years (and, by design, only a mile from Kennestone Hospital). There, they raised their two daughters. She was active in our community, belonging to the the Cobb County Medical Society since 1953, serving on county, state and national medical alliance boards. She was a proud member of the "No-Sew Club", a dedicated and talented bridge player, and served as President and Secretary of the Honeysuckle Garden Club. She was also a sustainer in the Cobb/Marietta Junior League and a supporter of Cobb Landmarks. Bebe took much joy in her flowers and birds, both of which could be seen in abundance around her home in Marietta and mountain home at Bent Tree. She also spent many Saturdays in Athens with Speedy and friends pulling for the Georgia Bulldogs! Bebe was the third generation of Moors, who were early members of Marietta First Methodist Church. She served on many committees, including the Altar Guild, and was an ardent supporter of the music programs, especially the youth choirs. The church was an integral part of her life. When unable to physically go to church later in life, she was one of the first "live streamers." Her family was the center of her life, and she inspired them with her steadfast love, strong faith, great sense of humor, and positive attitude. She loved hosting relatives and friends in her home; the back door was always open and all were welcome. She was a gracious, Southern lady who touched many lives. Her ability to make each relationship so uniquely significant was her special gift. Bebe will be greatly missed, but her spirit and love will live forever in the hearts of the many people who knew and loved her. Bebe's service will be held on July 20 at 2 PM, at Marietta First United Methodist Church, with a reception immediately following in the fellowship hall. In lieu of flowers, donations can be made to the Marietta Educational Garden Center and/or Marietta First United Methodist Church.