Despite a legal battle still pending between an existing and potentially incoming Marietta Square restaurant, crews on Monday were working on what is set to be the site of the new eating establishment. Details on the latter remain scarce, with one owner declining to provide particulars on any aspect of his future business.

Restaurateurs GG and Salem Rose announced earlier this year that they would open a new restaurant, “Local on North,” in July at the site of the old Christmas Shoppe, which closed in 2017. The restaurant was to be the Roses’ fourth in a series of restaurants sharing the name “Local on North,” with previous locations operating in Canton, Roswell and Duluth.

But the pair were served by a restraining order in March following legal action taken by Jim Tidwell Jr., owner of The Marietta Local on the other side of the Square, which prevented Local on North from opening using the terms “the local” or “local” in its name. 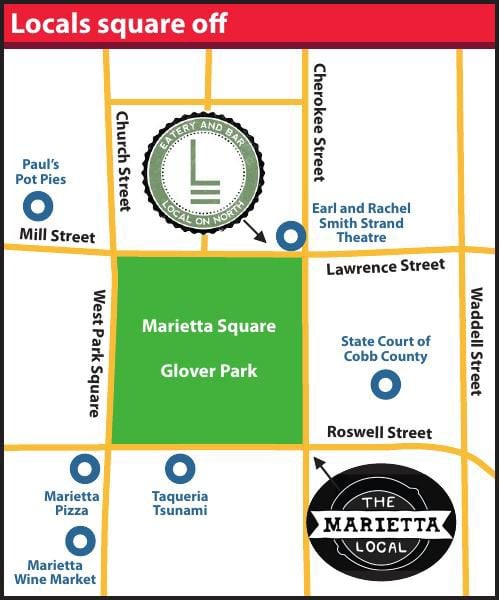 Originally set for June, a hearing on the Roses’ motion to dismiss the case against The Local on North remains set for 9 a.m. Aug. 19 in Cobb Superior Court. While the Roses earlier this summer said their plans then were to open a restaurant in “late September in the 113 N Square address,” no opening date or range was given Monday.

“I have no details, to be honest right now. We don’t know,” Salem Rose told the MDJ when asked when his Marietta restaurant could open, the name under which it might operate, its projected size and its seating capacity.

The restraining order filed by Marietta attorney Dan Wirth, on Tidwell’s behalf, claimed that if Local on North was allowed to open on the Square, it would result in customer confusion.

The filing also states that when the Roses announced their intention to open their restaurant, Tidwell received questions or comment from about 75 customers on the matter.

The filing says that The Marietta Local, which opened as “The Local” in 2014, seeks no damages nor does it want to prohibit the Roses from opening a restaurant.

Doug Flint, an attorney from the Canton-based Flint, Connolly & Walker law office representing the Roses, filed the motion to dismiss the case. Attorneys from the office did not immediately respond to requests for comment.

In a legal response, attorney Flint said the Roses’ restaurant venture does not intend to confuse customers and would not use “Marietta” or “Square” to market or advertise.

A third business on the Square with a similar moniker, The Local Exchange, which is described as a modern-day general store, is not involved in the naming rights feud.