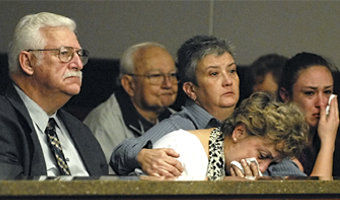 The family of Sheri Blount reacts as Superior Court Judge Adele Grubbs delivers her sentence on Friday morning. Blount, who admitted stealing nearly a quarter of a million dollars from her former employer, was sentenced to serve four years in prison for the felony theft and forgery charges. 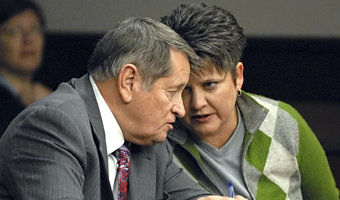 Sheri Blount consults with her attorney, Jimmy Berry, during Friday morning’s sentencing hearing. Blount was sentenced to serve four years in prison for felony theft and forgery charges. She admitted to stealing nearly a quarter of a million dollars from her former employer.

The family of Sheri Blount reacts as Superior Court Judge Adele Grubbs delivers her sentence on Friday morning. Blount, who admitted stealing nearly a quarter of a million dollars from her former employer, was sentenced to serve four years in prison for the felony theft and forgery charges.

Sheri Blount consults with her attorney, Jimmy Berry, during Friday morning’s sentencing hearing. Blount was sentenced to serve four years in prison for felony theft and forgery charges. She admitted to stealing nearly a quarter of a million dollars from her former employer.

MARIETTA — Two days before Christmas, Cobb Superior Court Judge Adele Grubbs showed little mercy to a woman who admitted stealing nearly a quarter of a million dollars from her former employer. Sheri Burton Blount, 44, was sentenced to serve four years in prison for the felony theft and forgery charges.

Blount, 44, will get to spend the holiday with the dozens of family and friends who came to Friday’s sentencing hearing to support her. The judge ordered her to report to the Cobb jail by 9 a.m. Tuesday. She was also ordered to pay full restitution of $224,728.62, and once she leaves prison will be on probation for six years. It will be up to the parole board to decide how much of the four years Blount actually serves.

Blount pleaded guilty to 35 counts of theft and forgery on Dec. 5. She took the money from Expanded Technologies, and the company’s owner said Blount had used it to buy WaveRunner jet-skis, Lady Gaga concert tickets and two vehicles, among other things.

Blount said nothing during Friday’s 90-minute hearing and would not speak to a reporter afterward. Instead, four character witnesses — including her father, former county commissioner Emmett Burton — testified on her behalf about what a good person and hard worker she is.

Both of her parents, her sister and her daughter, who is a freshman in college, were among the capacity crowd in the courtroom.

Burton testified to the toll the situation had taken on his daughter. He said when they were first notified in summer 2010 that her former employer, Expanded Technologies Inc., of Marietta, had filed a civil suit against her, she swallowed 30 Ambien sleeping pills in an attempt to take her own life. He was driving her to a lawyer’s office when she slumped in the vehicle, he said.

“My daughter died in my truck,” Emmett Burton said, his voice cracking. Firefighters and paramedics brought her back, he said, and she spent three days in intensive care. A nurse lives with her now, he said.

“We’ve been very worried about Sheri. No one knows, but I’m going to tell you now: I brought my daughter back to life for a year and a half of hell. It’s a terrible thing for a father to wonder if he did a misjustice to his daughter. … Sheri has lived a year and a half of the worst life. But Sheri has remained strong; she’s worked hard and she does right. She got with some bad people, she did some bad things, and she now realizes it. She’s tried to make that right.”

Burton said he had helped his daughter get a job with the Teamsters, driving and providing vehicles for movie productions. At one point, he said she now earns about $33 per hour, but later said he didn’t know how much she was making.

Jean-Luc Liverato is a cofounder of Expanded Technologies, which manufactures wire mesh for use in HVAC systems. Blount had been with his company since 2002 as a bookkeeper and office assistant, and Liverato testified that in 2009, her total compensation was just over $100,000, including use of a company car. At least 10 employees of his company also came to court Friday to see that justice is done, he said.

“I agree with all the (defense) witnesses,” he said. “She gained our trust very rapidly. She was a very hard worker, very efficient, and very professional.”

When prosecutor John Butters asked him to tell Judge Grubbs what sentence he wanted for Blount, Liverato insisted his company is not out for revenge.

“We want justice,” he said. “A clear message needs to be sent to the community that this won’t be tolerated. I’m glad she has a great job. … We’re so sad she did this. We’re sad for her family.”

Blount’s lawyer, Jimmy Berry, told the judge that she “has a great deal of remorse.”

“I think that’s shown by the fact she had to be hospitalized,” he said. “She took it very hard. It certainly is embarrassing for her and her family, someone who has been a pillar of this community for so many years. … She wants to make restitution. … This is not a person you’re going to see again.”

“I’m not overly sympathetic about taking the sleeping pills. That to me is not a step in a direction of responsibility,” Butters said. “She just got caught.”

He asked the judge to send her to prison for five years, with 25 years of probation.

Judge Grubbs said she was concerned about Blount’s previous suicide attempt and whether she may again try to hurt herself before reporting to prison, but ultimately granted Blount’s request to wait until after Christmas to go to jail.

“She has great family, and I know their pain,” Grubbs said. “She’s done that to them.”

After the sentencing, Blount’s parents hung their heads, and her mother wept audibly. Blount, who had cried during her father’s testimony, showed little emotion.

“Embezzlement is an easy crime,” Grubbs said. “You don’t have to stick a gun in somebody’s face, or break in to somebody’s house. It is a tremendous breach of trust. It’s horrendous, and the only way for it to stop is to let you know you’re going to jail.”

She also said Blount will not be allowed to worked as a bookkeeper or in any job that involves handling money while she serves out her probation.

Afterward, Liverato said he was satisfied with the sentence.

“I hope that Sheri learns from her infractions, from her unfortunate greed,” he said. “I hope she has time to contemplate, in jail, her actions, and hopefully give back to the community more than she stole from Expanded Technologies.”

Lawyer Henry Quillian, of the Galleria-based Taylor English Duma firm, is representing Expanded Technologies in a civil suit against Blount. That suit has been stayed pending the outcome of the criminal trial, and after the sentencing, Quillian said he could not say exactly what will become of that civil suit.

Oliver Halle, a retired FBI agent who now consults with companies about preventing white-collar crime, said that while some try to downplay its effects, “economic violence,” as he called it, destroys lives.

“People are ruined by it,” he said. Perpetrators “are usually the most trusted employee in a small business, the one who ‘would never do anything like that.’ And they end up being the one who does it. There’s such a sense of betrayal.”

Stimulus update: $300 weekly bonus to jobless aid ends Sept. 6 in Massachusetts and US, but several states opting out early