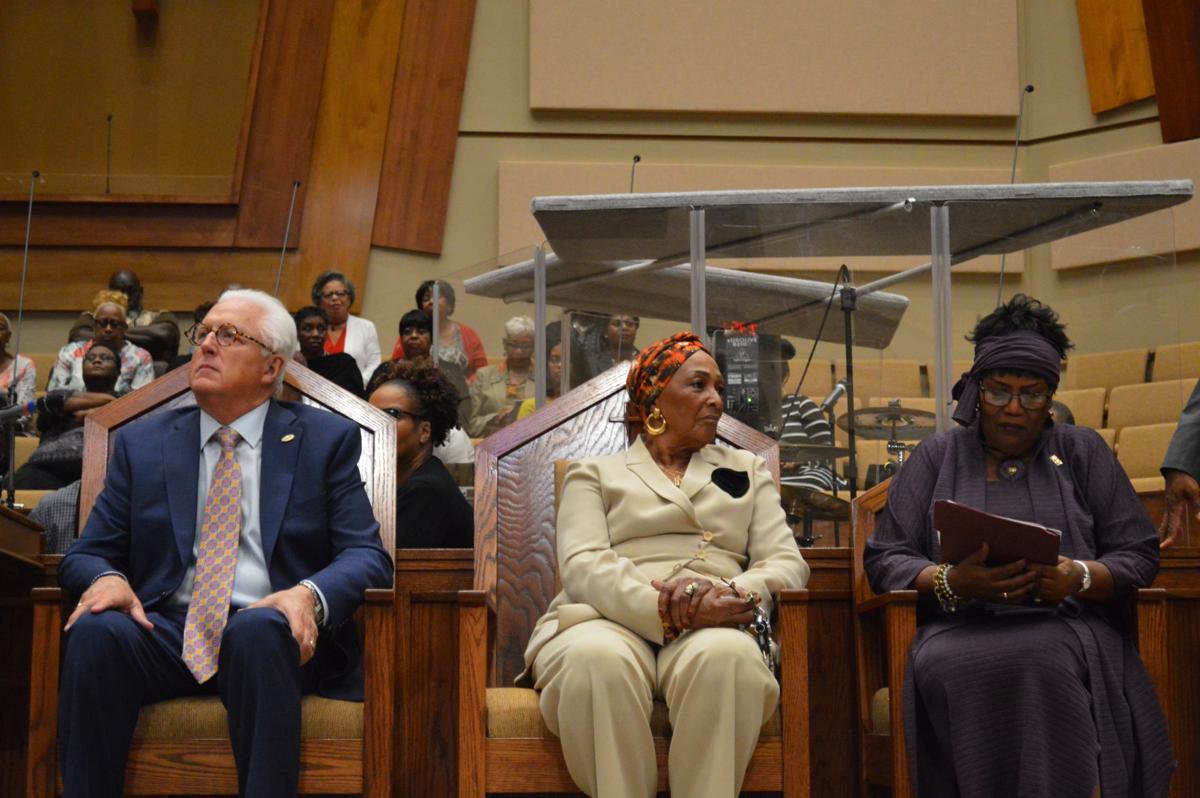 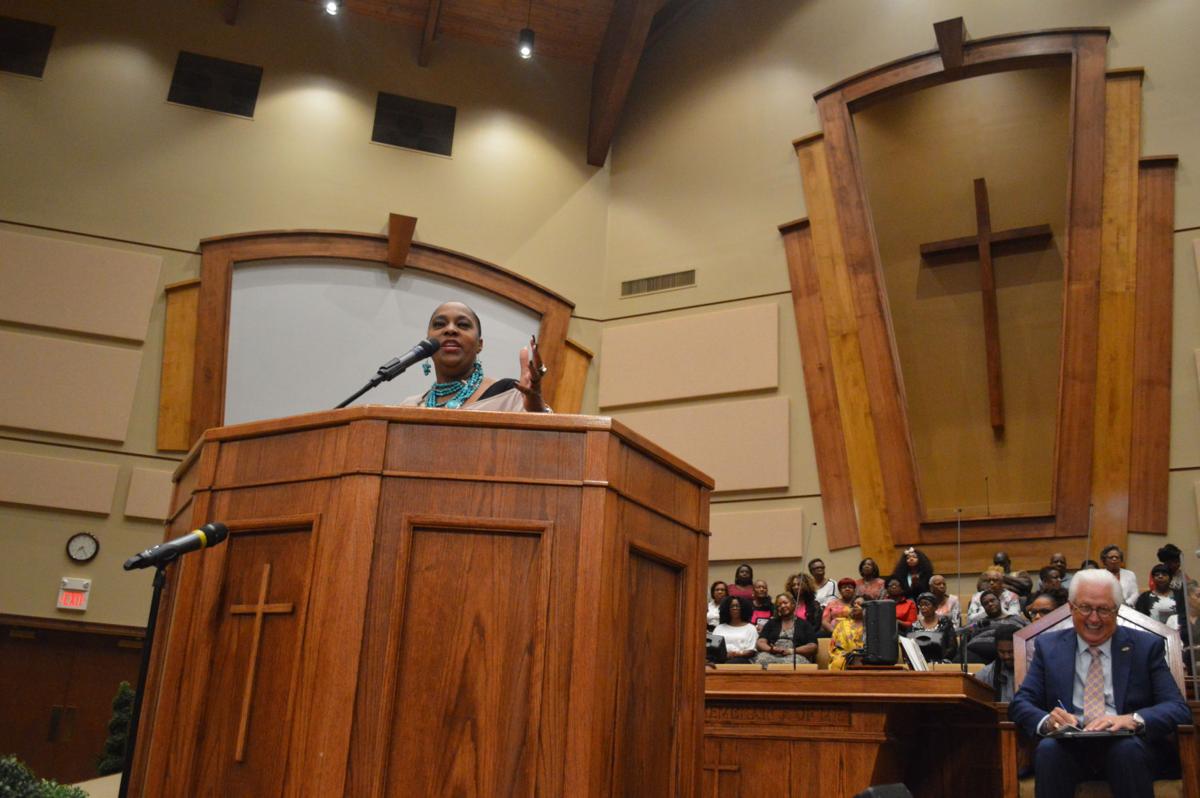 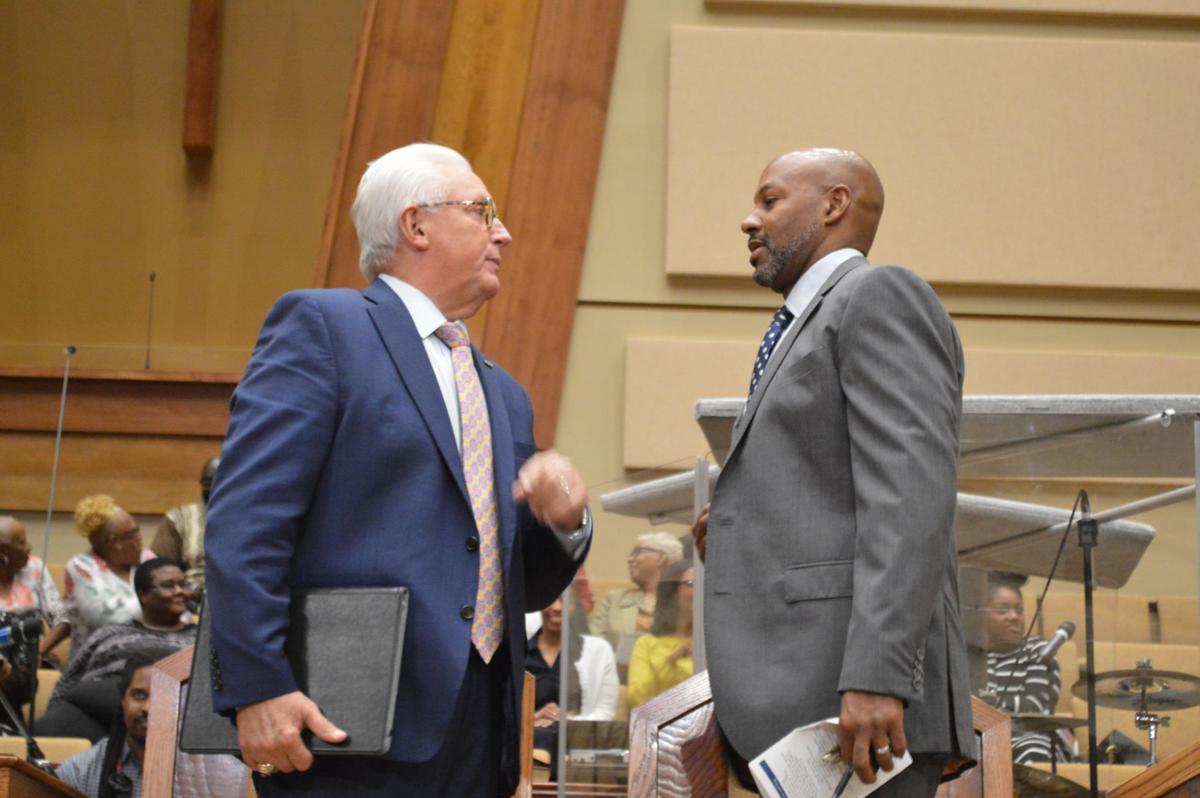 The Rev. Dr. Dwight "Ike" Reighard, left, and the Rev. Eric Beckham, right, speak in the sanctuary of Zion Baptist Church during the first night of the state NAACP convention Thursday night.

The Rev. Dr. Dwight "Ike" Reighard, left, and the Rev. Eric Beckham, right, speak in the sanctuary of Zion Baptist Church during the first night of the state NAACP convention Thursday night.

MARIETTA — After a raucous choral rendition of “We Shall Overcome,” Dr. Dwight “Ike” Reighard told the crowd in Zion Baptist Church’s cavernous sanctuary of growing up poor in downtown Atlanta.

“And I think it’s probably what shaped my worldview as much as anything ever really has.”

Jeriene Grimes, the president of the Cobb NAACP, said she chose Reighard to kick off the 77th annual convention of the Georgia NAACP because of his message of unity.

“With the current climate of the world and a lot of discord and hatred,” Grimes said, her goal was to send delegates back to their local chapters “empowered and fired up.”

The convention is a four-day affair that has drawn NAACP delegates from all across the state. The theme this year is, “When we fight, we win.” When asked what the fight was in this day and age, Grimes said it’s the same as ever: for civil rights.

It is the third time Cobb County has hosted the convention.

Several people took to the podium before Reighard on Thursday night, and some lauded the strides made in advancing the rights of African Americans both nationally and locally. Several who spoke were the first African Americans in the county to have achieved the positions they now hold.

Scott Hamilton, a deputy chief at the Cobb County Police Department — also the first African American to hold that position — said great progress has been made, even in the past 15 years.

“I’m a 24-year vet of the Cobb County Police Department and I’ve seen a lot of changes in Cobb County,” Hamilton said. “15 years ago if you asked me if I would be in front of you as the deputy chief — knowing me I probably would have said yes.

“But I might not have been truthful to myself,” he continued. “Because things were a lot different. It was a lot different and a lot of people in this room know what I’m talking about.”

Moments later, Randy Crider, Cobb’s interim public safety director, told the crowd, “You’re looking at somebody that gets it.”

“I believe it’s important that we look like our community, that we understand the cultures in our community because that’s the only way we’re going to better serve those in our community,” he said. “I want you to know that I’m committed to that.”

“I’m used to the days when people would say, ‘Is he black or is he white?’” he said. “But now it’s come down to what party you’re in.”

Doubling down on Reighard’s paean to unity, Murphy concluded his address by saying, “Folks, I’m here to tell you today: I’m in the people’s party. Welcome to Cobb.”

Tomorrow’s main speaker is the Rev. Nelson Rivers, vice president of religious affairs and external relations for the National Action Network. He will be speaking at the Atlanta Marriott Northwest at Galleria at noon.

Amazing what people will say to stay elected or try to appear to be on their side to get votes. Especially when you know it’s all about their personal agenda.