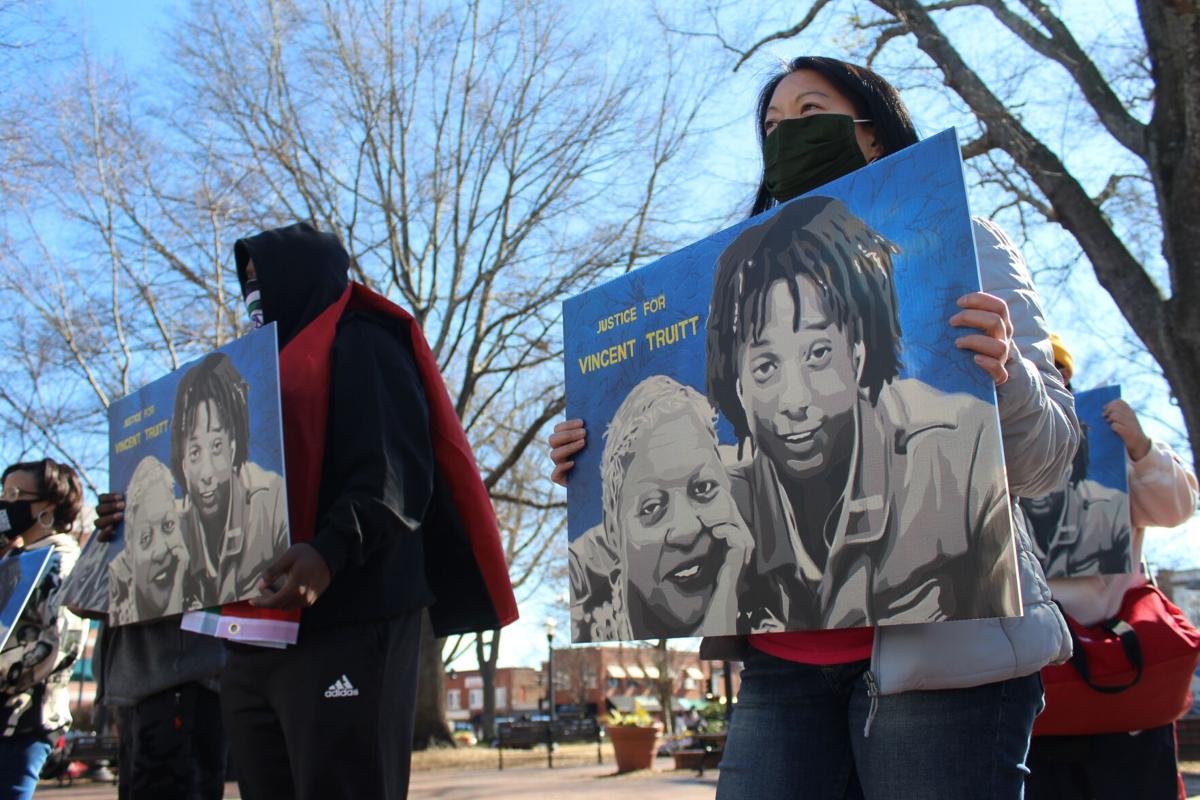 Supporters of Vincent Truitt’s family hold up signs at a rally at Glover Park on Saturday. 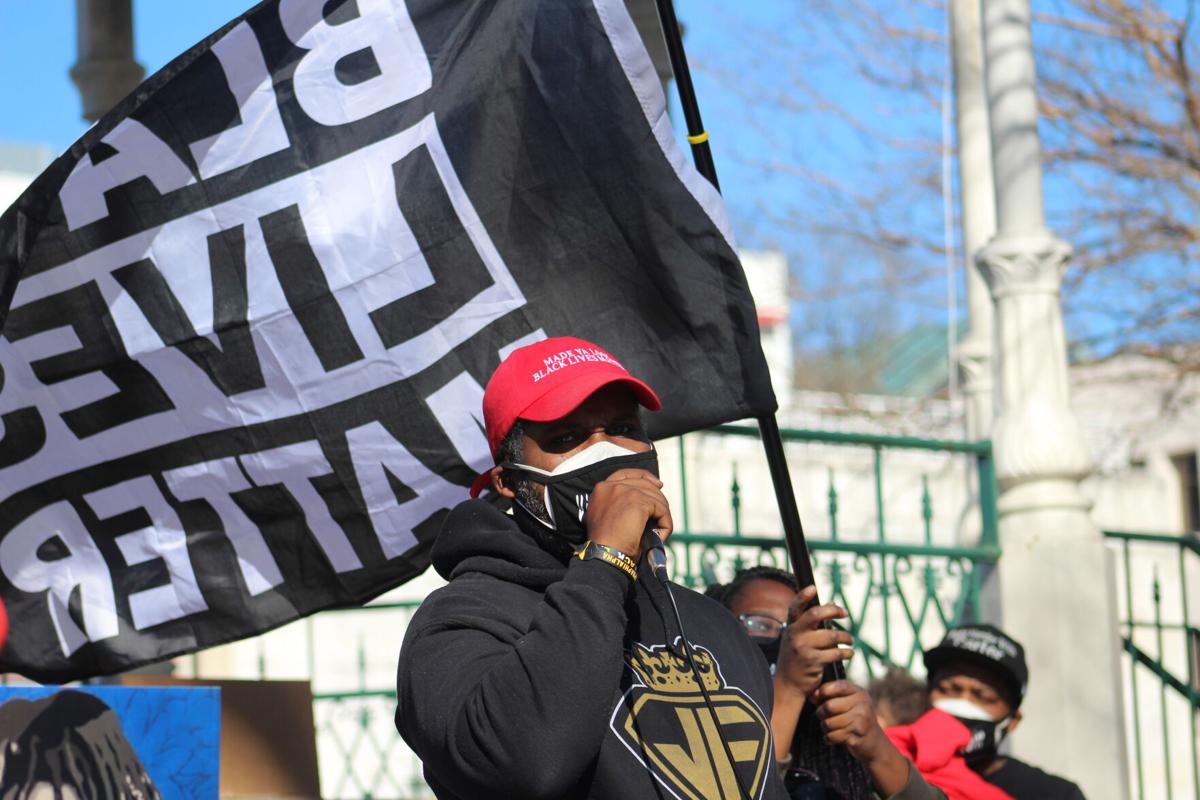 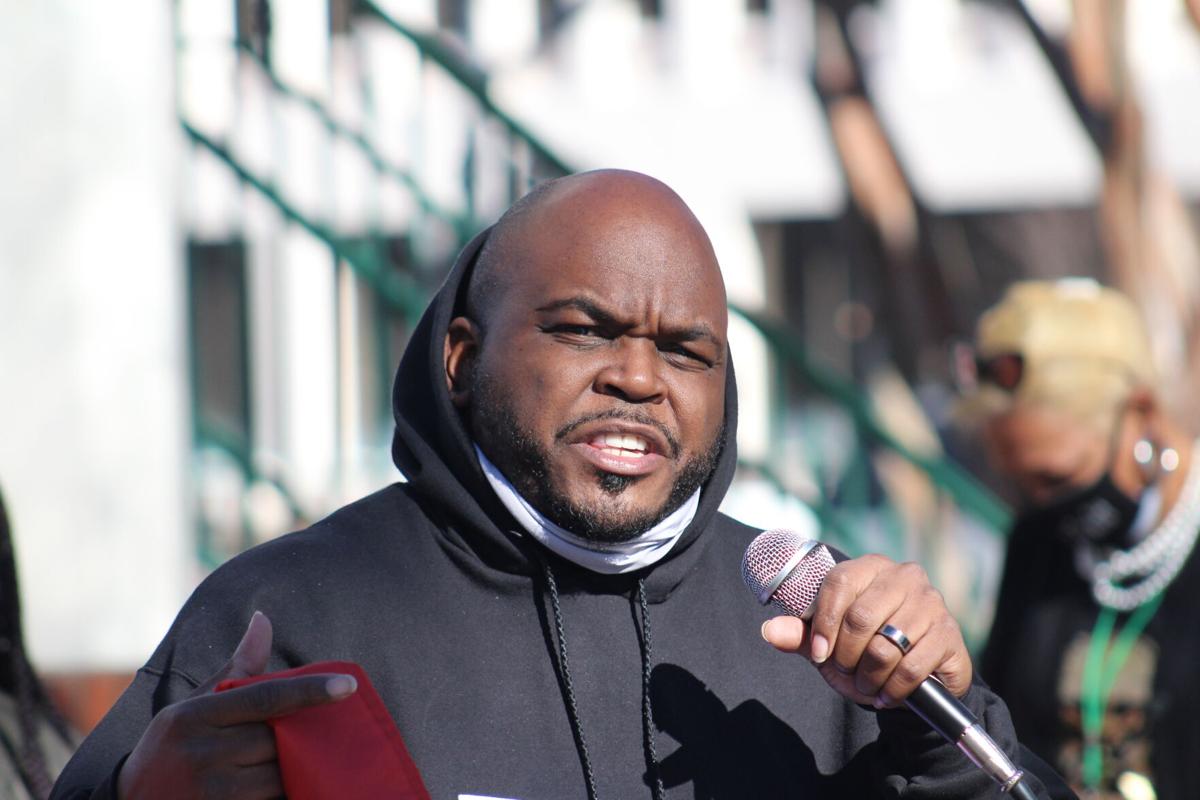 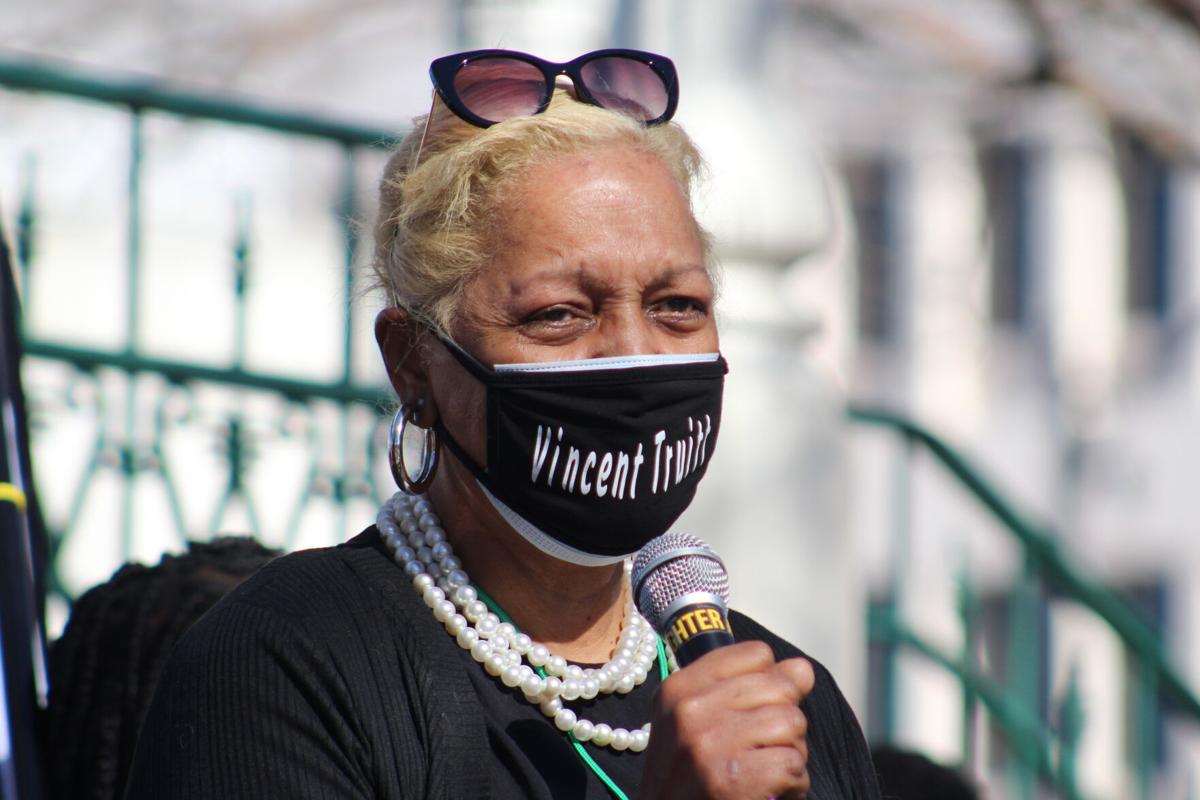 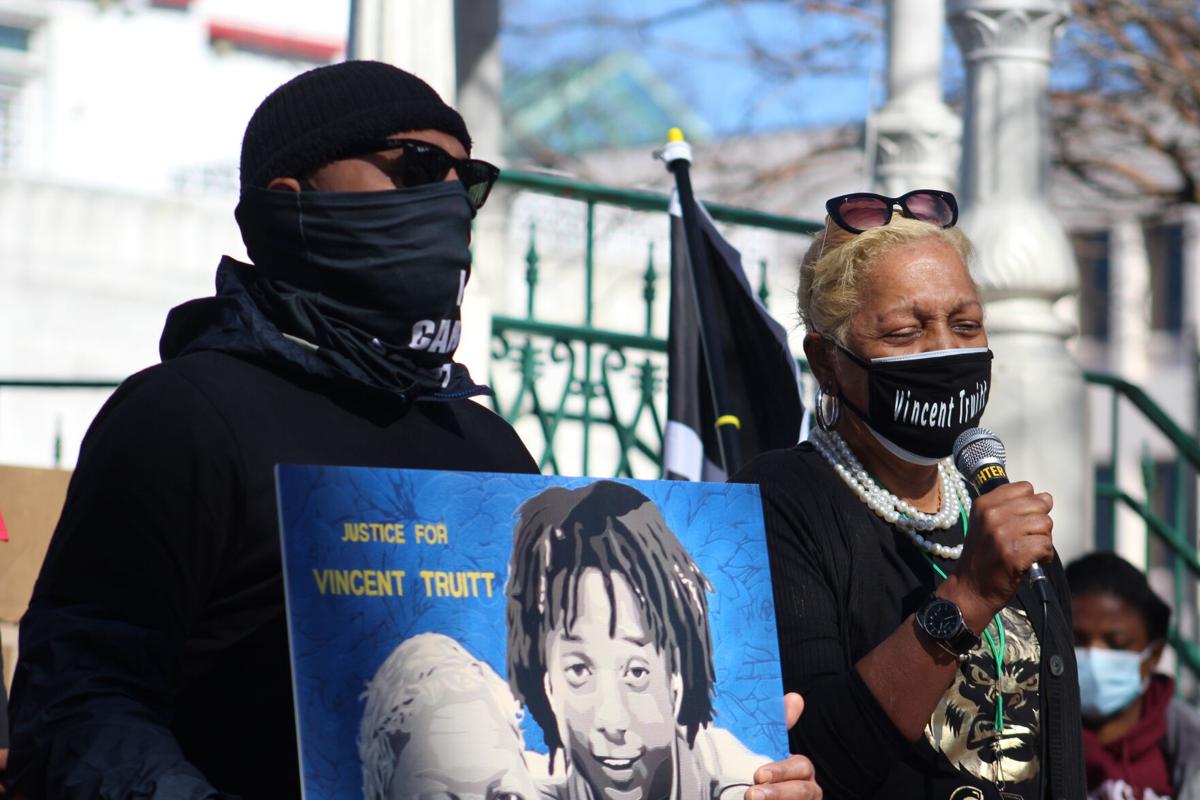 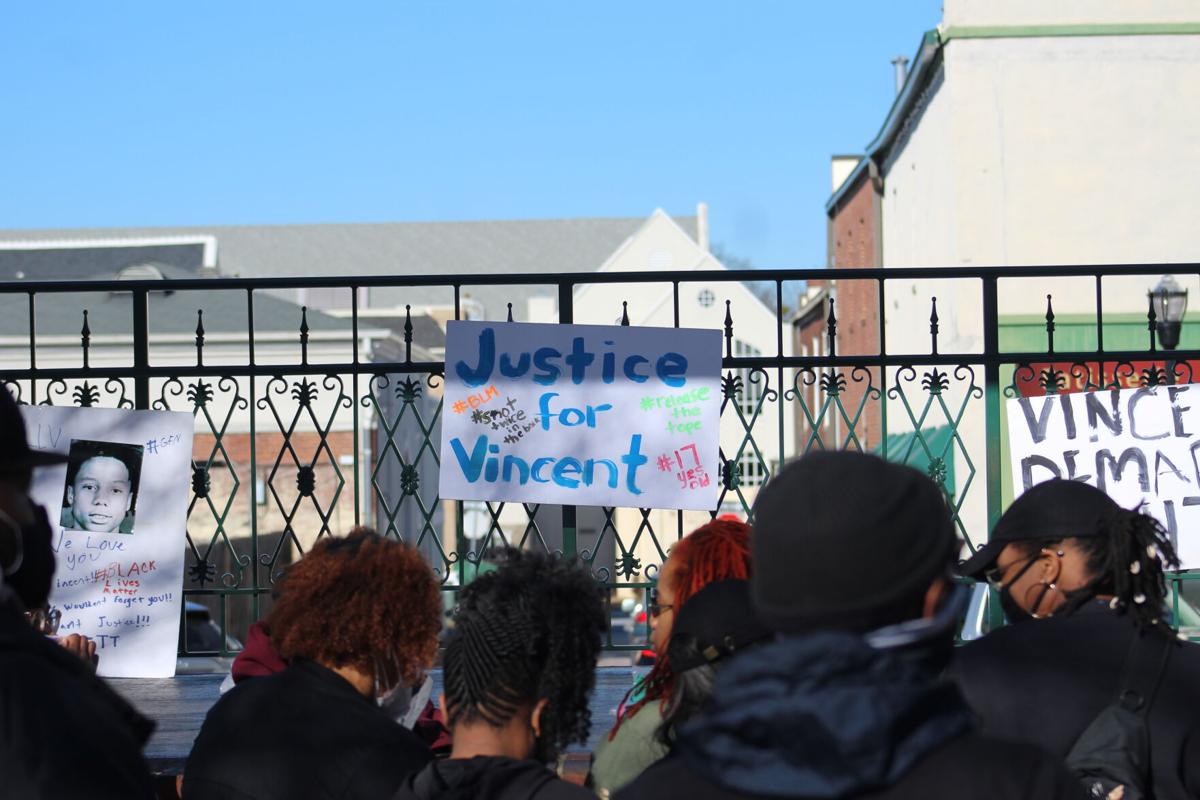 Vincent Truitt, 17, was shot and killed by a Cobb police officer while fleeing arrest last summer. A press release from the Georgia Bureau of Investigation said Truitt had brandished a gun, something the family says is contradicted by the officer’s body camera video. 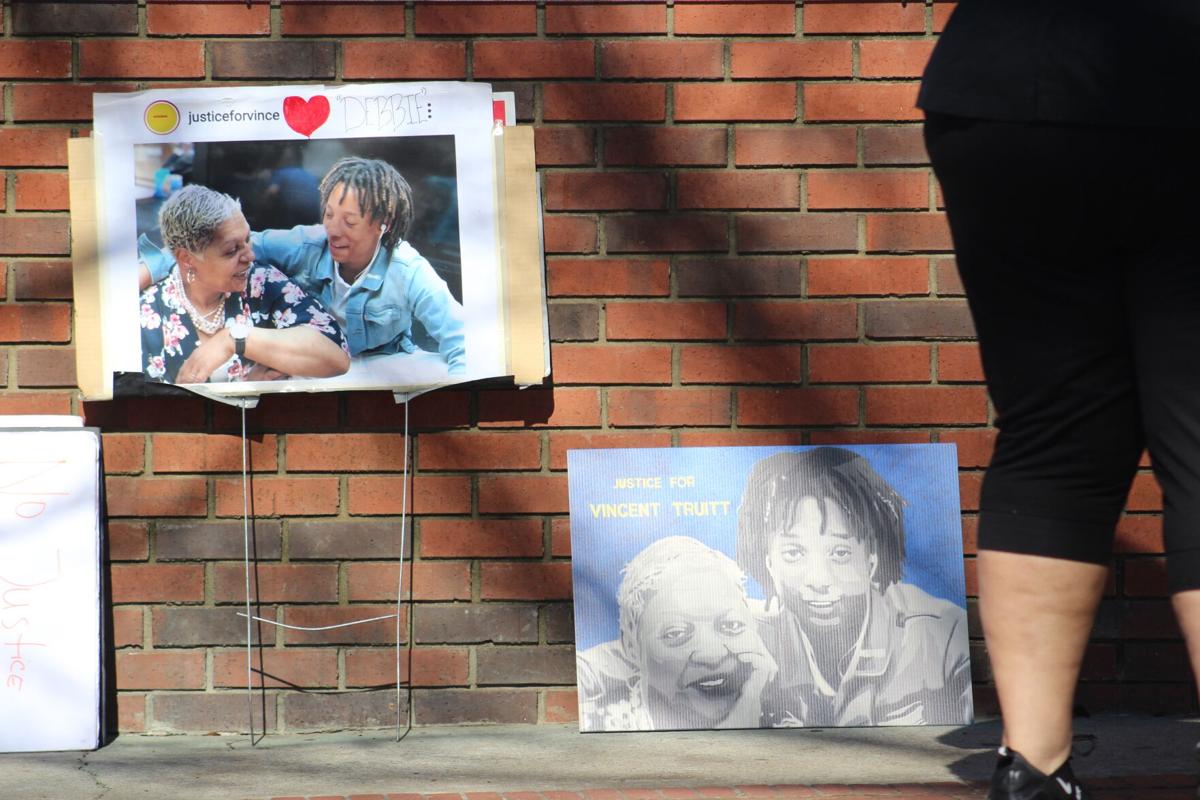 Vincent Truitt’s family passed out signs depicting the slain teen with his grandmother at a rally at Glover Park Saturday.

Supporters of Vincent Truitt’s family hold up signs at a rally at Glover Park on Saturday.

Vincent Truitt, 17, was shot and killed by a Cobb police officer while fleeing arrest last summer. A press release from the Georgia Bureau of Investigation said Truitt had brandished a gun, something the family says is contradicted by the officer’s body camera video.

Vincent Truitt’s family passed out signs depicting the slain teen with his grandmother at a rally at Glover Park Saturday.

MARIETTA — A grand jury will decide in February whether to bring charges against the unnamed Cobb police officer who shot and killed 17-year-old Vincent Truitt while he was fleeing arrest last summer. That isn’t good enough, Truitt’s family said Saturday.

That the self-styled “progressive prosecutor” has resisted these calls is, family members said, tantamount to a bait-and-switch.

“We’re playing politics and it’s p---ing me off that people make promises that they know they’re not going to keep just for the sake of playing politics with lives,” Arthur Washington, Truitt’s principal at KIPP Atlanta Collegiate High School, told the crowd.

But the family’s attorneys, Gerald Griggs and Maria Banjo, said Broady’s decision to go straight to a grand jury went against standard procedure.

“(If) you have probable cause, you present the case to a magistrate court judge who issues a warrant, and then you go arrest the person, and then they go through the preliminary hearing, and then it’s presented to a grand jury,” Griggs said. “So we’re cutting out steps, and my question to (Broady) is, why are we cutting out steps?"

Broady denied this as well.

“Mr. Griggs is referring to the way Paul Howard did his case down in Fulton County, trying to get political persuasion,” Broady said, referring to the recently ousted Fulton district attorney. In a case that received national attention last year, Atlanta police officer Garrett Rolfe on June 12 shot and killed Rayshard Brooks, who had wrestled a taser from Rolfe in the parking lot of a Wendy’s restaurant and pointed it at him while fleeing. Before the Georgia Bureau of Investigation had completed its investigation of Brooks’ death, Howard charged Rolfe with murder, a decision applauded by some and denounced by others who saw it as a desperate ploy to burnish his progressive credentials ahead of the election.

“Here in Cobb County, we have always sent, and will always send, every officer-involved shooting to a grand jury, so we can get a decision from this community that the grand jury represents that is not tainted by politics or by someone’s emotions or by someone’s particular party persuasion,” Broady said.

The video of Truitt’s death has not been made public due to an exemption to the state’s open records law, which allows the government to withhold information pertinent to a pending investigation.

Truitt’s relatives are convinced the video will prove he never brandished a weapon and that the officer had no reason to fear for his life or shoot the teenager.

“The question is, if (the officer) was a danger, why is this officer the only one that pulled out his weapon?” Banjo said. “He wasn’t the only (officer) there.”

Should the grand jury decide against charging the officer, Broady said he would release the video of Truitt’s death within a week.

Truitt was one of three teens in a stolen car during an attempted traffic stop July 13, according to a Georgia Bureau of Investigation release issued later that week. The car fled and later stopped at a dead end behind a building at 270 Riverside Parkway off Interstate 20 and south of the Riverside EpiCenter in Austell.

Truitt and one of the car’s other passengers ran, the GBI said.

A Cobb County police officer who authorities have not identified shot Truitt after the Fulton County teen “brandished” a handgun while fleeing, per the GBI release. He was taken to Grady Memorial Hospital in critical condition and died the next day.

The Cobb Medical Examiner found Truitt had been shot twice from behind and ruled Truitt’s death a homicide. The office said the ruling means Truitt’s death was caused by the actions of another and does not indicate whether a crime had been committed.

Stole a car, wrecked while trying to escape and then fled the scene. Enough said.

Nothing said about why he was shot while running away. The Cobb Police has the age old recipe of "he was black and he had a gun." Where's that gun? This report omits that critical piece of information. If there were a gun found, we all know the bias of this website would have put that gun in the headline. No gun found, we get the age of lie of omission. It would seem based on this reporting that the Cobb Police shot a passenger who ran from a crashed stolen car. Give the Cobb Police's employment of their tried and lied "He was black and he had a gun" over decades, I'd have run too if I were this kid, but I am an old white man which privileges me such that the Cobb polices don't even look twice at me. The Marietta Polices have given me the stank eye a couple times, and good for them. They did not excuses me, based solely on my being an old white man, from my behavior they considered to be suspicious. Walked home the gym one time which is a similar route one might take from the Hwy 5 homeless camp into downtown Marietta. Felt like every police in town drove by me. Another time I had bought unethanoled 87 up at the QT at 41 and Allgood, one of the few places its available. Then I drove to Cobb Hardware via Roosevelt Circle. Had my rear windows down a little for the gasoline vapor (SUV, no trunk). A Marietta Police notice the windows on Roosevelt CIr and did a full 180 to follow me for blocks seeking the age old "I smelled weed." This after I paused politely and let him come up the wrong side of the road to get around parked cars even though I had the right of way. And what do I think about both of these encounters? I think "Good for the Marietta Police for doing their jobs fairly and equitably no matter what I look like." As a matter of fact, it seems to me that old white men are the most dangerous people. The polices ought to be hassling TF out of every single one that has (or had) a Trump sticker on their car or sign in their yard! Obvious insurgents. Enough said. Hang 'em all!

Hang all old white men who have a Trump sign on their car or a sign in their yard because they are "obvious insurgents"? YOU NEED HELP!!

Do I though? Mike Nelson saying this young man the article's about deserved to die because he was in a stolen car and ran away from people wearing the uniform of the people who kill his people. So yeah, based on Mike Nelson logic, Trump supporters who still support Trump despite his attempts to kill Congress and overthrow the USA, yeah, they should all be hanged. It's Mike Nelson's logic, so that is how the Right sees things, and Trump and his supporters are on the Right. So who am I to argue?

ANNETTE, YOU HAVE A STRANGE FIRST NAME FOR BEING AN OLD WHITE MAN!!

Yeah, Dunno what to say. MDJONLINE.COM shows me that I am posting as "1270" and then shows me what I posted under the moniker "1270" but then come back later and it says "Annette" despite the bills they send me having my old white man name, Christopher Davis. The MDJ folks, they ain't too bright sometimes. Trust me I am an old white man. From here. Been here since I fell out my mama in the 1960s.

There is NO reason to shoot a fleeing youth (or any other person) in the back---PERIOD! That officer is obviously not fit to carry a gun, especially if bias was involved, but regardless if he felt that a fleeing young man is a danger to him. This puts a black eye on all other police officers.