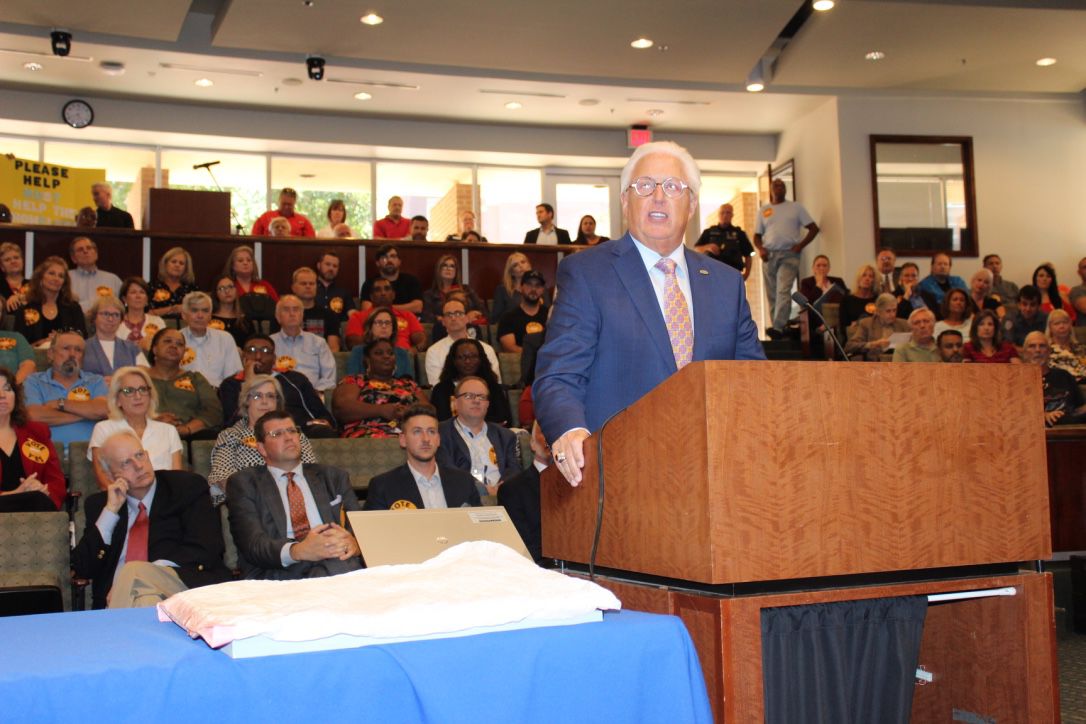 Dr. Dwight “Ike” Reighard, president and CEO of MUST Ministries, appeals to the Marietta City Council on Thursday to be able to expand the organization’s facilities for the homeless slightly closer to surrounding homes than the current 750-feet zoning buffer allows. 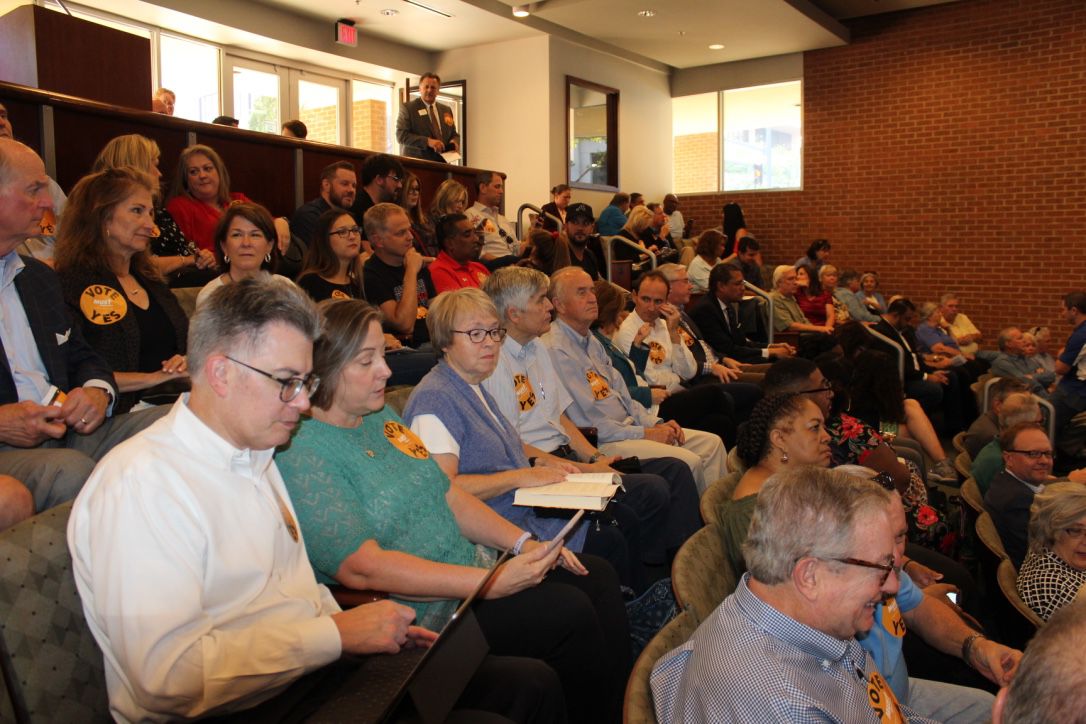 About 150 people attended a Marietta City Council hearing Thursday for MUST Ministries’ request for a zoning variance, allowing the construction of a two-story homeless shelter 30 feet closer to homes than normally allowed. 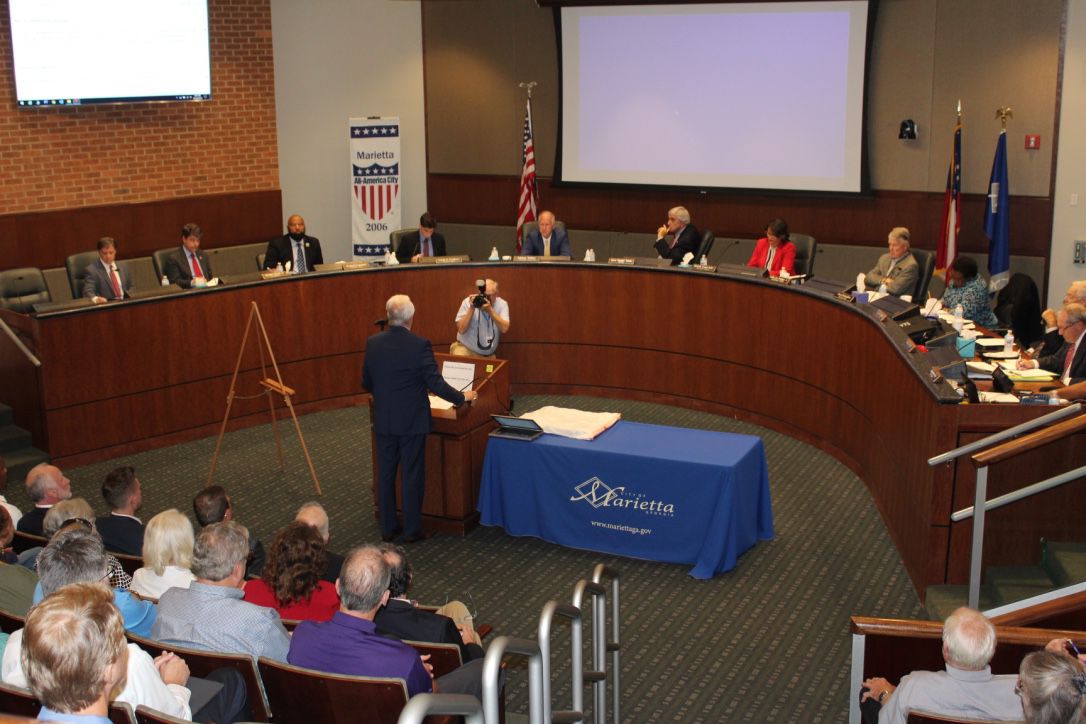 The Marietta City Council listens to parties in a zoning variance hearing for MUST Ministries Thursday.

Dr. Dwight “Ike” Reighard, president and CEO of MUST Ministries, appeals to the Marietta City Council on Thursday to be able to expand the organization’s facilities for the homeless slightly closer to surrounding homes than the current 750-feet zoning buffer allows.

About 150 people attended a Marietta City Council hearing Thursday for MUST Ministries’ request for a zoning variance, allowing the construction of a two-story homeless shelter 30 feet closer to homes than normally allowed.

The Marietta City Council listens to parties in a zoning variance hearing for MUST Ministries Thursday.

MARIETTA — Thursday afternoon the Marietta City Council agreed to allow MUST Ministries to locate facilities for the homeless 30 yards closer to surrounding homes than normally allowed.

MUST has just over 6 acres on the corner of Cobb Parkway and Bells Ferry Road and wants to build a two-story facility with around 130 beds on site.

That would allow it to move from its existing 72-bed shelter location, less than half a mile away on Elizabeth Church Road, which will be sold.

To build in its preferred location, MUST had to get a zoning variance allowing a 30-yard encroachment on Marietta’s 750-foot buffer zone between homeless shelters and neighboring residences.

That request was recently denied by Marietta’s Board of Zoning Appeals, prompting Thursday’s 4:30 p.m. appeal hearing before the City Council, which attracted around 150 people both in support and opposition.

“We’re trying to do the right thing,” MUST Ministries President and CEO Dr. Dwight “Ike” Reighard told the Marietta City Council during the hearing.

He said the building location nearer homes is preferred because it would allow more safety and a residential feel than the alternative.

“It just makes sense from an economics and practicality standpoint," he said.

After an hour of arguments from both sides, Councilman Reggie Copeland recommended reversing the zoning board’s decision, essentially allowing the new building to go forward.

That recommendation was unanimously approved by the council, eliciting both loud applause and threats of legal action from the audience.

Copeland’s recommendation included a stipulation for MUST to provide more security surrounding its facilities.

It was August of 2017 that MUST got turned down the first time in its attempt to get approval for this plan, and board members told the MDJ they’re exhausted by the two-year fight.

If MUST did not get approval to build on the spot it wanted, it would have been able to build elsewhere on the same 6.3-acre property without approval.

But that Plan B option comprised a three-story building that would have been much more visible from the road and eliminated the possibility of separate wings for groups like mothers with children and homeless veterans, MUST said.

Councilwoman Michelle Cooper Kelly challenged the organization to improve its outreach so fewer problems spill over into the community going forward.

“Look for ways of true wrap-around services,” she told MUST representatives at the hearing. “You’re keeping them at night but they’re out bothering people during the day.”

Reighard accepted her challenge and promised MUST staff will continue to monitor outside the organization’s boundaries, picking up trash and mitigating as best they can the impact of homeless shelter operations on neighbors.

He said MUST has already arranged to pay for more security measures and hiring a certified peer specialist to help people living in the woods near its property, of which around 20% are veterans with PTSD.

MUST staff and volunteers say they've picked up almost 700 bags of trash in a 5.5-mile range as part of their efforts to keep the area clean and tidy.

During the hearing Reighard explained there is only 30 yards difference between the organization’s preferred two-story facility, which would not usually be permitted that close to homes, and its contingency plan for a three-story expansion, which is slightly further away and therefore permitted.

But opponents to the organization’s planned expansion within 750 feet of homes say they’re already frightened by the people attracted to the area because of MUST services.

Homeowners told the council they have to deal with trash, discarded drug paraphernalia and trespassers on a daily basis.

One neighbor said if the council allowed the zoning variance, “it will open a can of worms that will haunt you from here on out.”

Joy Johnson, executive director of The Georgia Ballet, said her dance studio is situated directly across from MUST Ministries’ donation center and she asked the council to help “protect” her 160 ballet students by denying MUST’s request.

“I have homeless people wandering into my building unannounced,” Johnson said. “A gentleman was until recently sleeping under my deck. I will not say that MUST doesn’t do good work but the programs they run are attracting these people to the area.”

“I’m afraid in my own home,” another resident said, citing an increase in neighborhood police calls.

“We’re seeing criminals, substance abusers and con men and the problems, as you’ve already heard, are getting worse,” another MUST neighbor told the council. “The radius of problems extend a good two miles.”

Todd Downey, who lives just over 300 feet from the MUST property, said he’s sick of cleaning up after the vagrants that scare his children.

“It might be 30 yards to them but it means a lot to me,” Downey said. “I have an 11-year-old that refuses to ride his bicycle because every time he goes out the homeless people approach him and harass him. To them I’m just collateral damage and I just pray ya’ll do not give them a variance to encroach on my property when they’re close enough already.”

The principal of a nearby elementary school also told the council she has supported MUST in the past but is concerned about its expansion plan and would have liked to have been consulted on it.

Reighard said MUST mitigates the problems associated with Cobb’s homeless population, rather than creates them.

“Every night at MUST there’s around 300 people under our roof. Every night, if MUST was not there, those people would be in the woods as well,” he said.

Reighard pointed out that homelessness is a problem across America, not just in Marietta, but MUST loves being located in the City.

He said 65% of the 200 to 300 people MUST has to turn away each month because of space restrictions are women and children.

“We want to build more family rooms to take care of them," Reighard said. "We're there to be part of the solution, we're not there to create problems."

Opponents to the plan generally agreed MUST is doing important, helpful work. They just don't want the associated issues so close to home.

Are we really at a point in this country where we consider providing people shelter (a basic necessity for life) is 'enabling' them to do drugs?

Do you understand why homeless people stay homeless? It's attitudes like yours.

Bravo to the Marietta City Council for doing the right thing! And to the naysayers unless you are working to end homelessness please be quiet as it is your and my family members who they are helping...yes, we all have addicts or ex-cons or homeless vets or mentally ill in our families so don't act like you're above it!