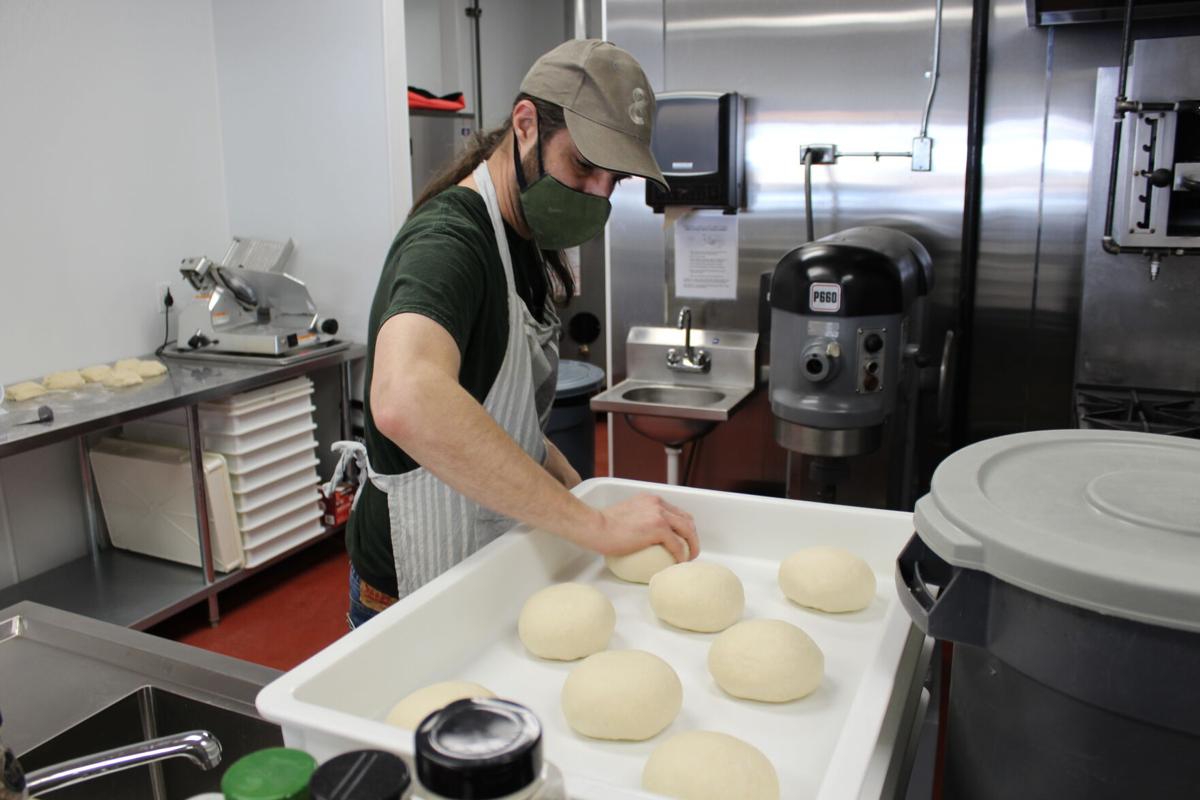 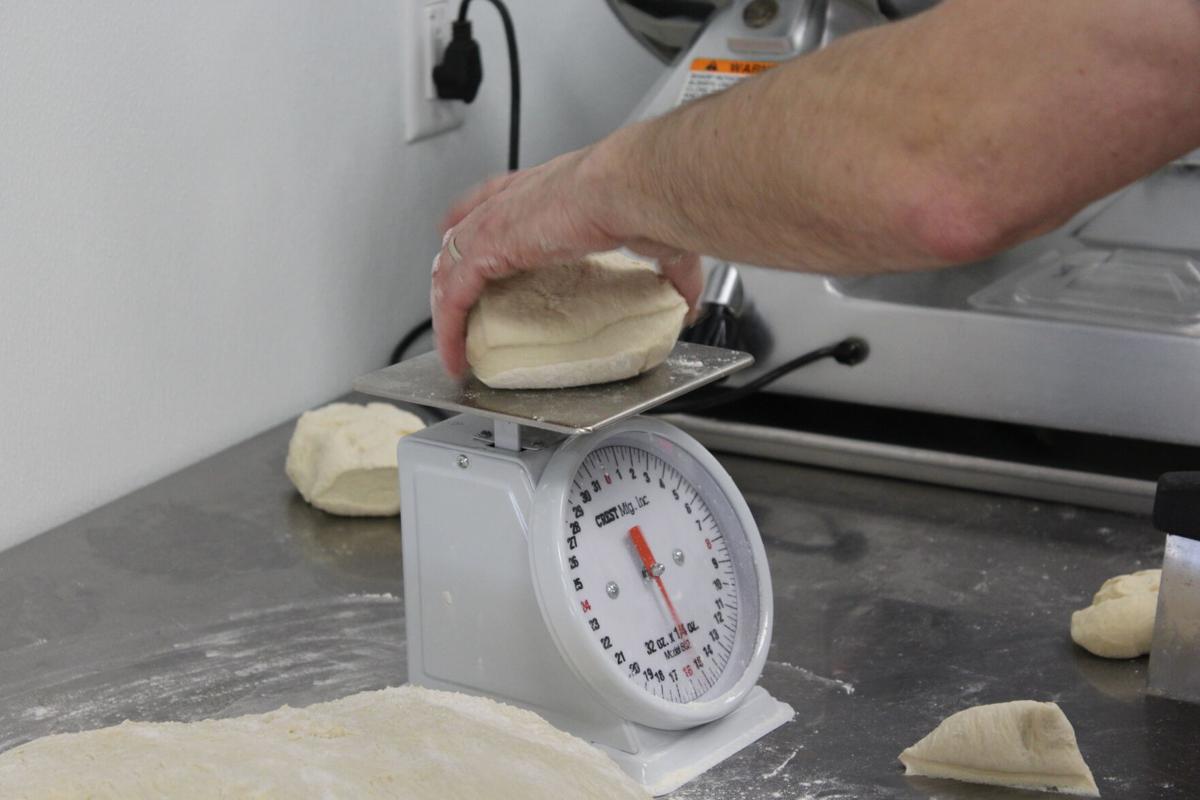 Ben Brackner weighs pieces of pizza dough at The Green Room of Mableton. 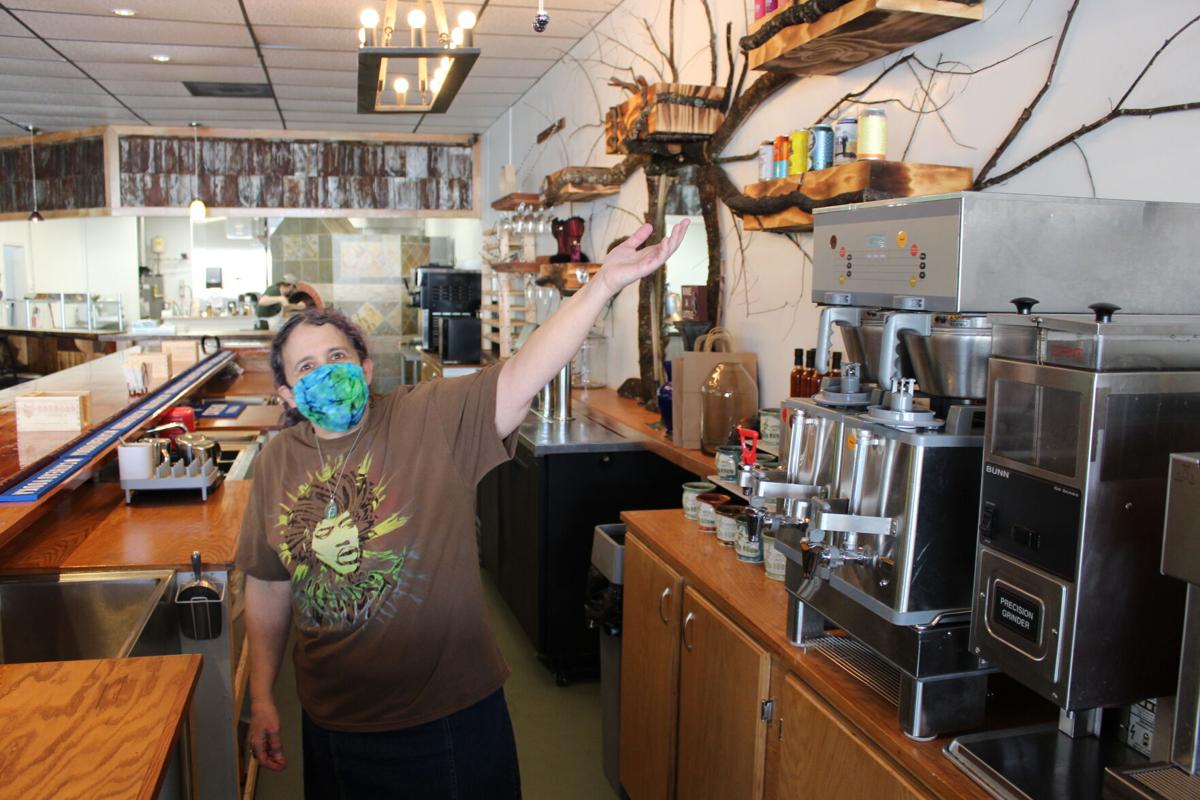 Linda Brackner gestures while giving a tour of The Green Room of Mableton. 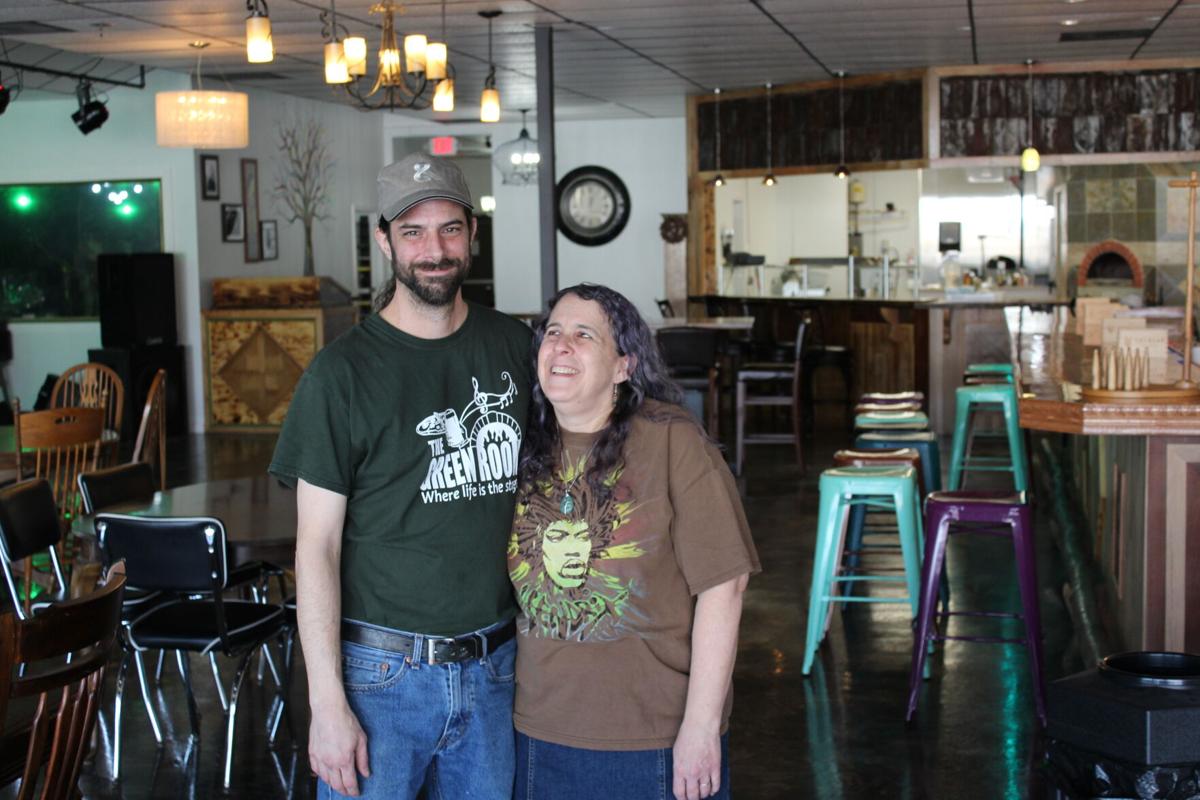 Ben and Linda Brackner pose in their new restaurant, The Green Room of Mableton. The space will also offer alcohol, live music and art. 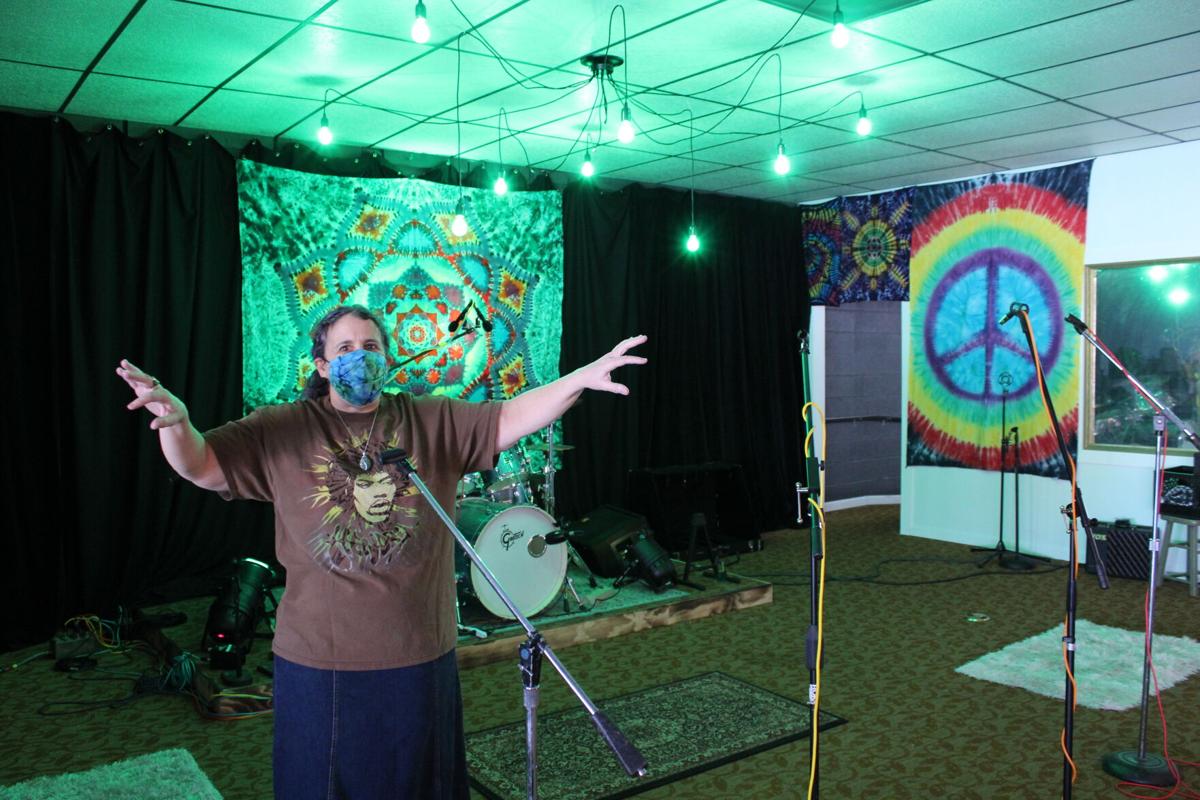 Linda Brackner stands on the stage at The Green Room of Mableton. 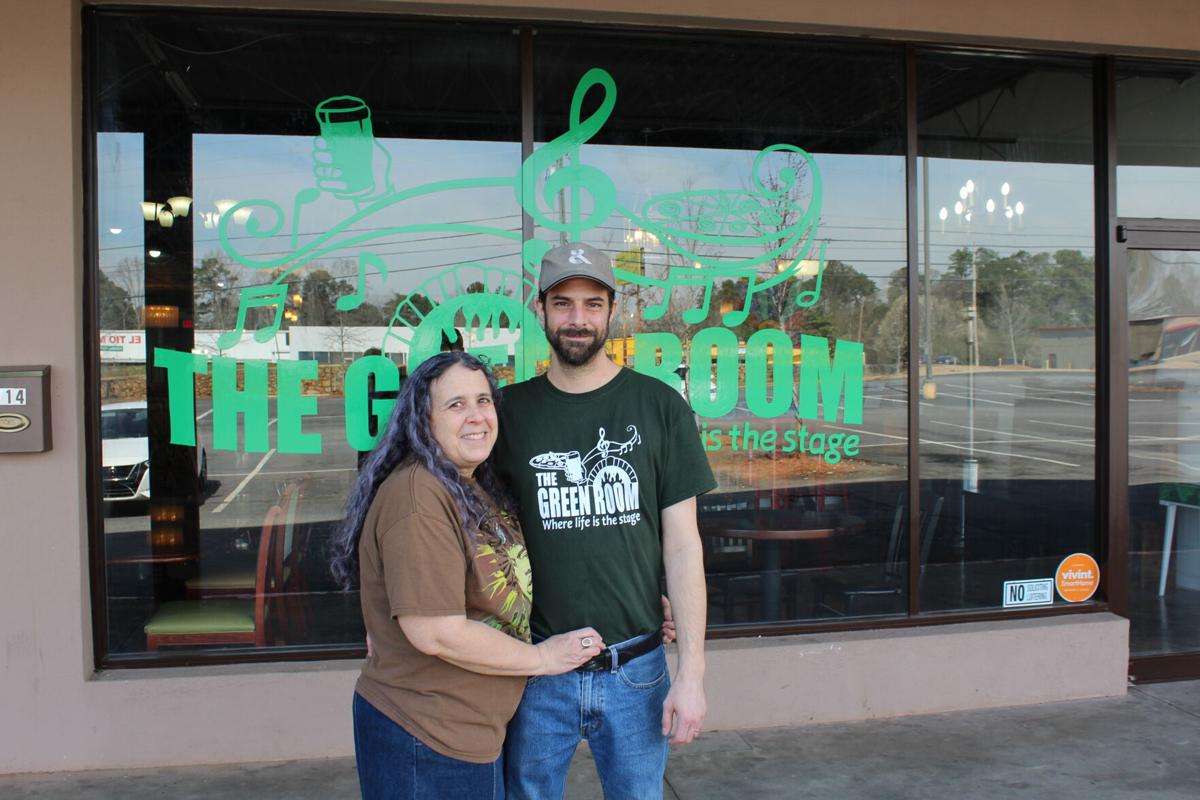 Linda and Ben Brackner pose in front of their new restaurant, The Green Room in Mableton.

Ben Brackner weighs pieces of pizza dough at The Green Room of Mableton.

Linda Brackner gestures while giving a tour of The Green Room of Mableton.

Ben and Linda Brackner pose in their new restaurant, The Green Room of Mableton. The space will also offer alcohol, live music and art.

Linda Brackner stands on the stage at The Green Room of Mableton.

Linda and Ben Brackner pose in front of their new restaurant, The Green Room in Mableton.

That all-in-one style is intentional. The Green Room is technically classified as a restaurant, and its owners plan to keep it that way by making sure more than 50% of sales are from food. But they also have ambitious plans to offer a range of events, food and drink to a diverse group of customers.

“We are the hosts, so we’re open for most ideas,” said Linda Brackner, who co-owns the restaurant with her husband Ben. “If somebody wants to put something on at The Green Room, we will host it and put it on.”

Ben Brackner has worked in a number of pizza restaurants. On Tuesday morning, he was busy shaping balls of dough and warming up his pride and joy — a 4,000-pound Italian-made, wood-fired pizza oven. Opening time was still hours away, but the heat builds up slowly, enabling each 14-inch pizza to cook in just two to three minutes.

The Brackners bought the oven from an Italian friend who had left the pizza-making business.

“I’ve got a lot of experience with pizza, and honestly when (Linda) found that oven it was a done deal,” Ben Brackner said.

Linda Brackner said the oven, visible from the dining areas, is the focal point of the restaurant, the signature product. But the Brackners have a fluid view of the business.

For now, they have a bar offering craft beer and wine, with plans to get a liquor license in the future. There are also plans to sell house-made ice cream and organic soda. They may end up hosting a tea party or offer performance art and other theatrical acts.

Changes to the menu are expected. The operating hours aren’t set in stone, either. They offer takeout now, but hope to add delivery later.

“It’s steps, you know,” Linda Brackner said. “You want to grow into it, so that you’re not overwhelming yourself. And it gives kind of a freshness to what you’re doing.”

The name is a reference to the green room, a term for a backstage area where artists hang out before and after performing. The Green Room’s green room is nicknamed “The Grizz Room,” in honor of a now-deceased friend and musician whose nickname was “Grizz.”

The restaurant opened Saturday with a show from Token Rhymes, a Grateful Dead cover band. Going forward, the Brackners plan to have free shows in the early evening for families, followed by ticketed shows after 9 p.m. There should be no shortage of acts, as Linda Brackner recounted countless musicians that they know through the local arts scene.

That scene has helped build The Green Room itself. Numerous items at The Green Room — tables, wall art, the bar and the stage, were made by artist friends.

Other contributions are brought by The Green Room’s bartender, an artist who plans to display and sell pieces in the space. The house hot sauce is made by yet another friend/employee.

The collaborative effort to open the venue has been three years in the making.

“We have everything money can’t buy, and so our friends really stepped up and helped us to build a lot of the stuff,” Linda Brackner said.

In fact, the couple deliberately chose a fixer-upper for The Green Room. Formerly occupied by a music store, the space was empty for years. When they picked it out, the only other business in the strip mall was a Dollar General.

“We picked the worst plaza in the area, to make the biggest impact and the biggest difference,” Linda Brackner said, adding that “there were holes in the ceiling. And there was tile glued to the floor, and then carpet glued to the tile, and it would get flooded and dried. So, it took forever to get any of the demolition done and all of it scraped up.”

For now, The Green Room’s capacity is 169 people with socially distanced tables. They hope to increase that when the pandemic ends.

With a diversity of entertainment, the Brackners want to attract families and kids while offering a platform for up-and-coming artists. They’re open to all genres of music. There’s talk of feeding the homeless. The ideas are endless.

“We want to show people that you can have fun, you can make changes in the world and be a positive role, through food, through music through community,” Linda Brackner said. “That’s what we’re trying to accomplish here.”

'We're not going to lose accreditation': Board of Education trio defend letter to Cognia