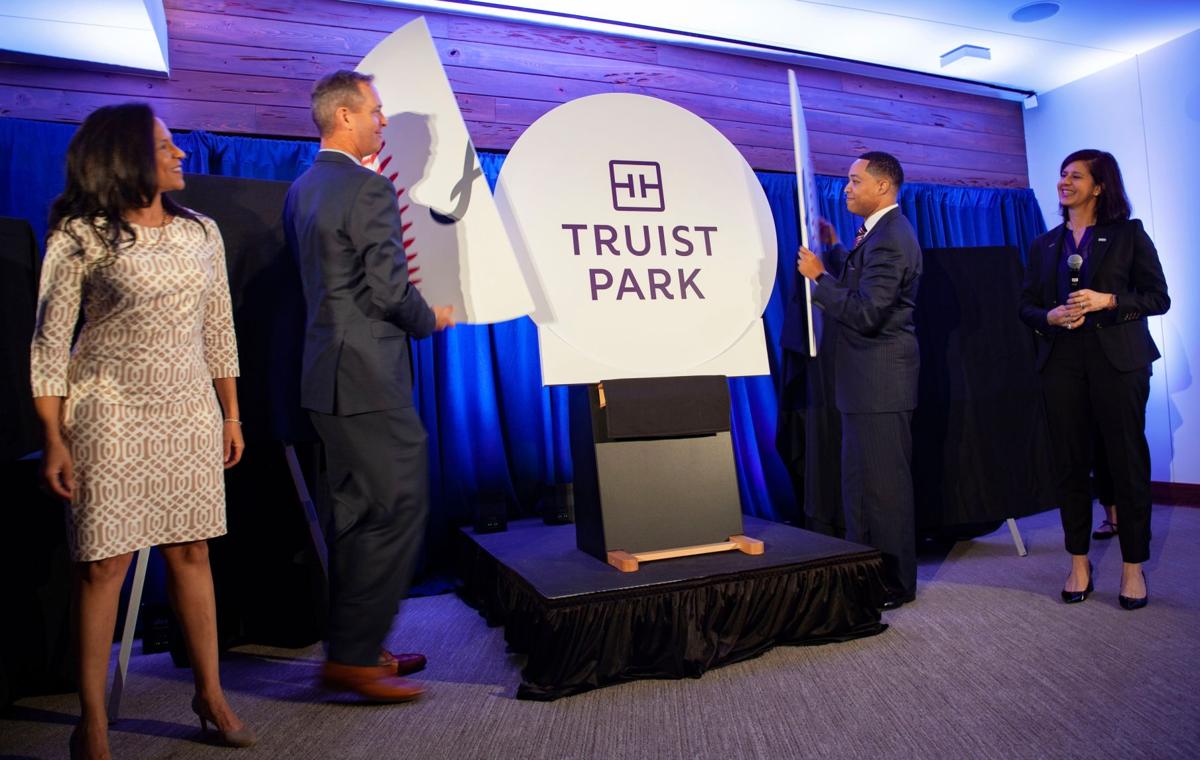 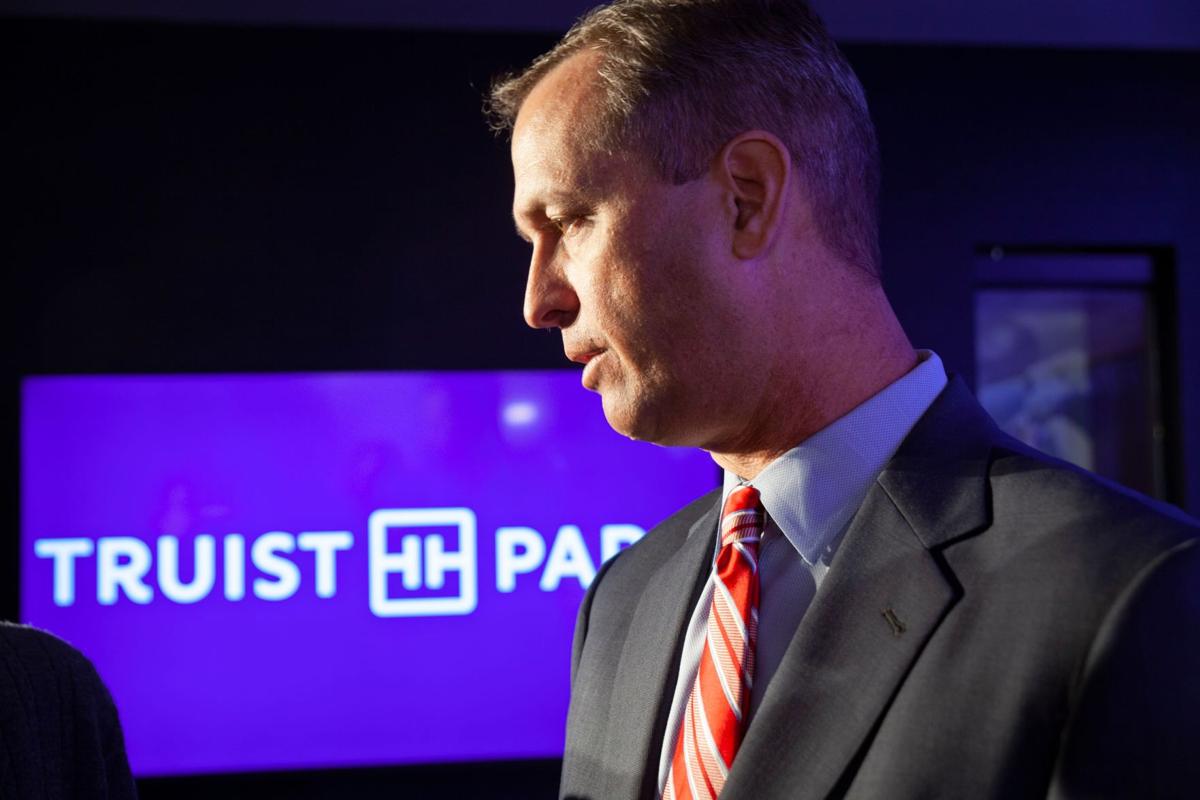 Atlanta Braves President and CEO Derek Schiller speaks with reporters about the renaming of SunTrust Park to Truist Park on Tuesday. 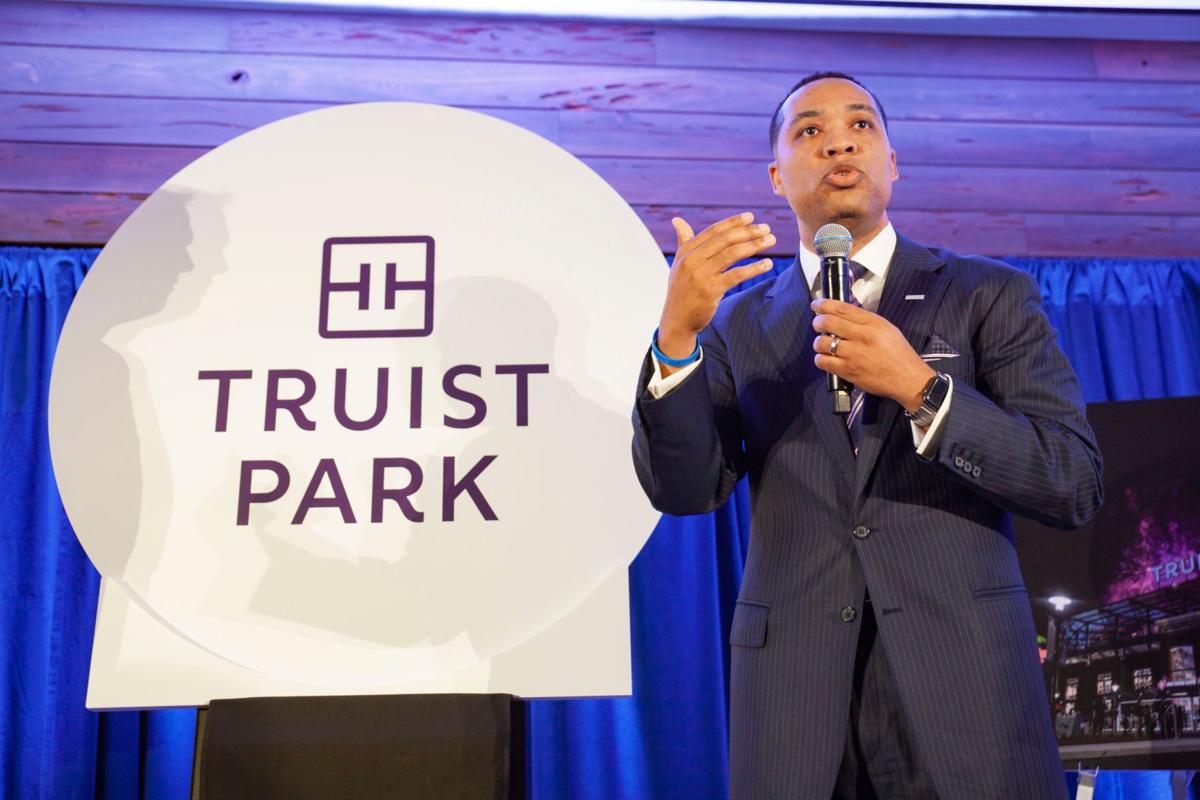 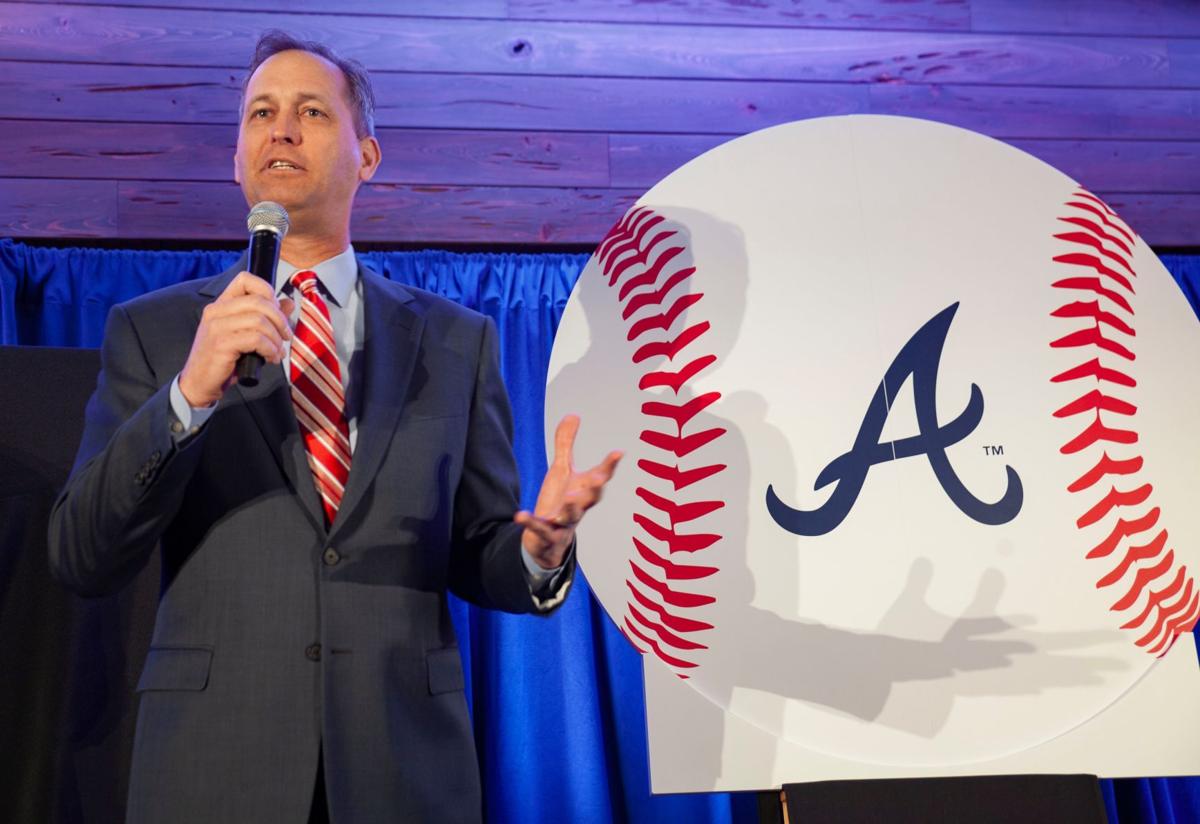 Atlanta Braves President and CEO Derek Schiller prepares to unveil the new name of the Braves home field at a press conference on Tuesday. 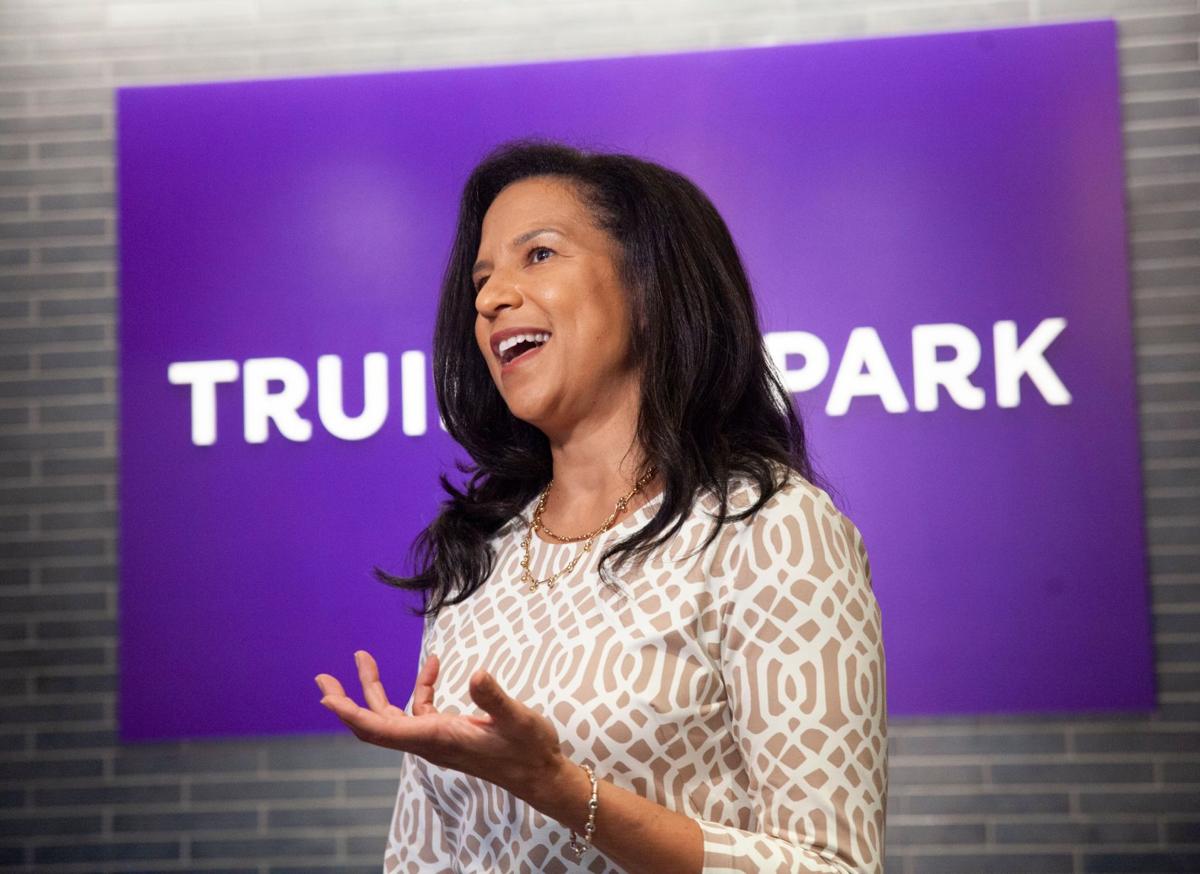 Susan Johnson, Truist's chief marketing officer, speaks with reporters after the reveal of the new name of the Braves home field at a press conference on Tuesday. 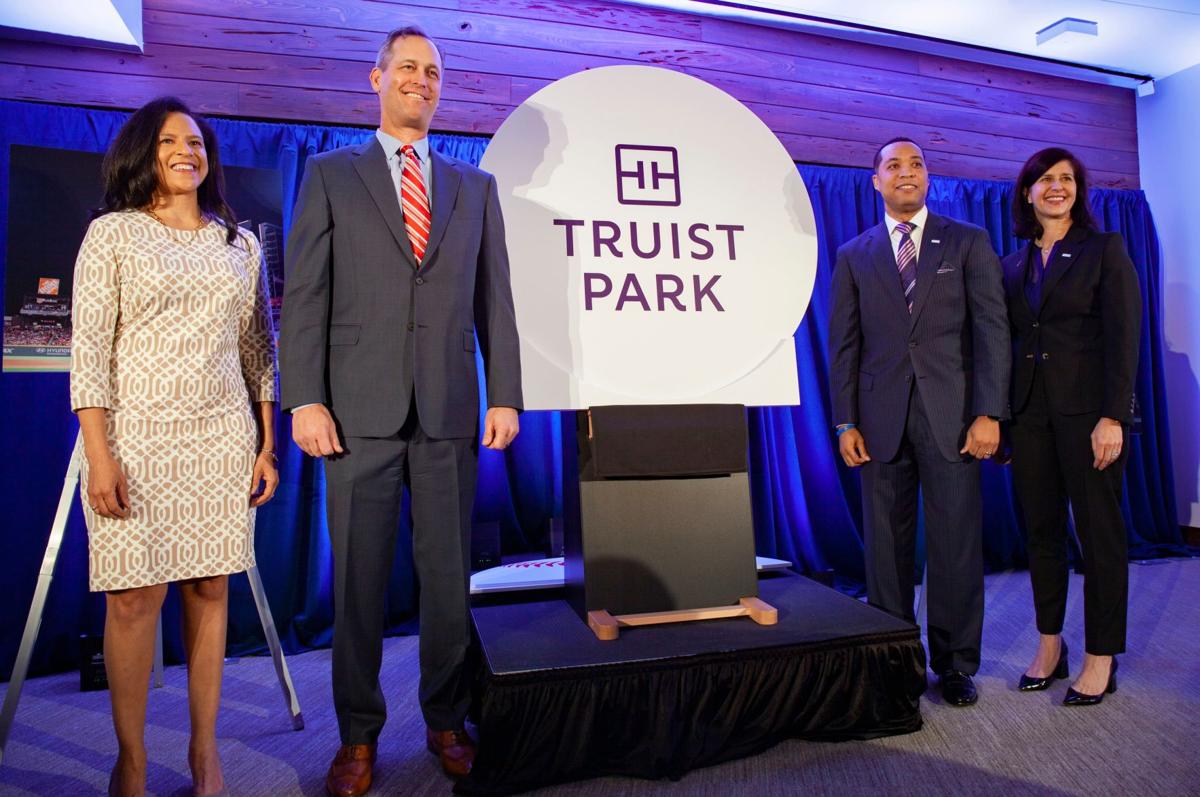 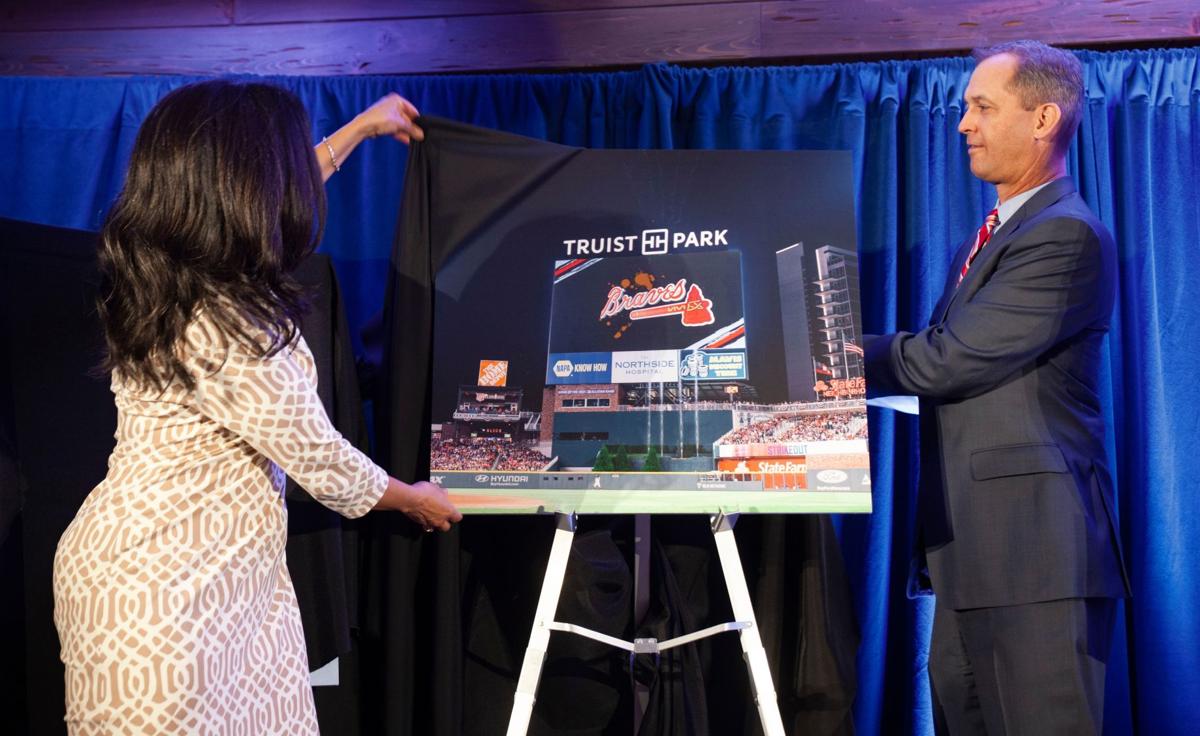 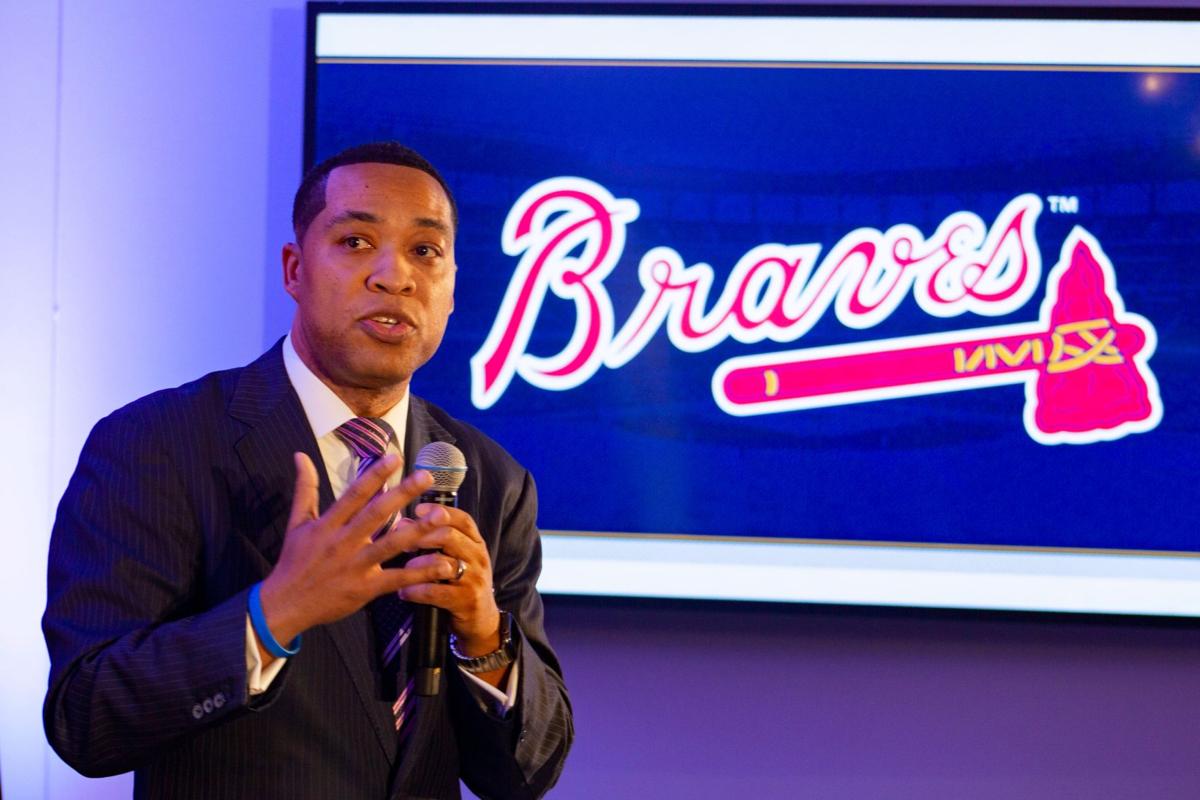 Atlanta Braves President and CEO Derek Schiller speaks with reporters about the renaming of SunTrust Park to Truist Park on Tuesday.

Atlanta Braves President and CEO Derek Schiller prepares to unveil the new name of the Braves home field at a press conference on Tuesday.

Susan Johnson, Truist's chief marketing officer, speaks with reporters after the reveal of the new name of the Braves home field at a press conference on Tuesday.

The new name was revealed Tuesday at the stadium during a joint news conference of SunTrust, now Truist, and the Braves.

Atlanta Braves and Truist executives pulled apart a giant, Braves-branded baseball to reveal purple block letters spelling out the park’s new name and a square with inward-facing Ts just above.

Atlanta-based SunTrust and North-Carolina BB&T banks announced a merger early last year, and in the following months said the newly created bank would be named Truist.

Atlanta Braves fans have eagerly awaited the announcement of the new stadium’s name as the status of their home team’s SunTrust Park was immediately called into question with news of the merger in February.

“Today is a moment that is all about the rebranding of this ballpark, and that is not an endeavor that is something that we take lightly. It is something that is going to endure for the next 20-plus years,” said Braves President and CEO Derek Schiller as cameras clicked around him Tuesday. “This partnership that we originally created with SunTrust was a 25-year partnership, and this is going to stand the test of time as part of that.”

SunTrust Park signs have already been taken down around the newly named park, which Schiller said officially took its new title at 11 a.m. But he told the MDJ there are some aspects of the rebranding that will take a little longer.

“There’s well over 100 signs that are part of this ballpark that included the SunTrust name, and then there’s everything from business cards and letterheads and stationery to uniforms and merchandise and all sorts of things. So if you add up all those things together, it’s not an overnight process. It’ll take some time,” he said.

Schiller said some of the larger signs, like the one that will be placed on top of the video board above the field, will be in place before the Braves’ first home game on April 3.

Others, like the largest sign that sits on the canopy of the stadium, will take an “extra large crane,” and some complex engineering, Schiller said, adding that it will still be in place before the end of the upcoming season. Braves representatives say all Truist branding will be complete by opening day of the 2021 season.

Sporting a purple tie and matching pocket square in recognition of the park and bank’s new brand identity, Donta Wilson, Truist’s chief digital and client experience officer, said the creation of the bank’s new logo to be featured at the Braves home field took months of research and input from bank and team executives, as well as Braves players and fans.

“Truist Park. It has a nice ring to it,” he said, prompting the audience to repeat the name after him.

Wilson said the bank’s new color, purple, was chosen as a mix of SunTrust’s blue and BB&T’s burgundy logos. The logo, a square with two sideways T’s inside, represents trust and inclusion.

While Schiller said the rebrand will “obviously” cost millions of dollars, Wilson declined to share the exact figure, saying instead that the value to the community outweighs any cost.

As part of the naming, Wilson also announced that every year for the next 10 years, the bank and baseball team will refurbish a community baseball field around Atlanta and name it after legendary Braves player Hank Aaron. Aaron now serves as the senior vice president of the Atlanta Braves.

To celebrate the name change, the Atlanta Braves and Truist are also offering all children 14 and younger a free ticket to attend a Braves game in April, excluding opening day.

Events behind the names

Following the merger of SunTrust and BB&T, Truist will be the sixth-largest U.S. bank holding company, serving more than 10 million households in the U.S., according to a SunTrust press release.

SunTrust landed the naming rights for the Braves stadium in 2014, and signed a 25-year agreement to hold those rights. Various media have reported that the deal was for $10 million a year.

The relationship between the Braves and SunTrust dates back to the baseball team’s former stadium, Turner Field, in Atlanta, according to Schiller. The Braves executive said the partnership began with the naming of a club at the former home field: “The SunTrust Club at Turner Field.”

“It’s been a wonderful relationship that we’ve had,” he said.

Schiller said both the Atlanta Braves and Truist will remain committed to providing memories for the families who walk through Truist Park’s gates through the rebranding process.

And, he added, “Ultimately we’re going to have that moment where we hoist the World Series trophy at this location.”

— Rosie Manins contributed to reporting for this story.

New name of SunTrust Park to be announced Tuesday

The Atlanta Braves are preparing to announce the new name of SunTrust Park.

The Book: How the Braves came to Cobb

COMING IN SPRING 2020 … just in time for the start of the baseball season.

Part 1: How the Braves came to Cobb