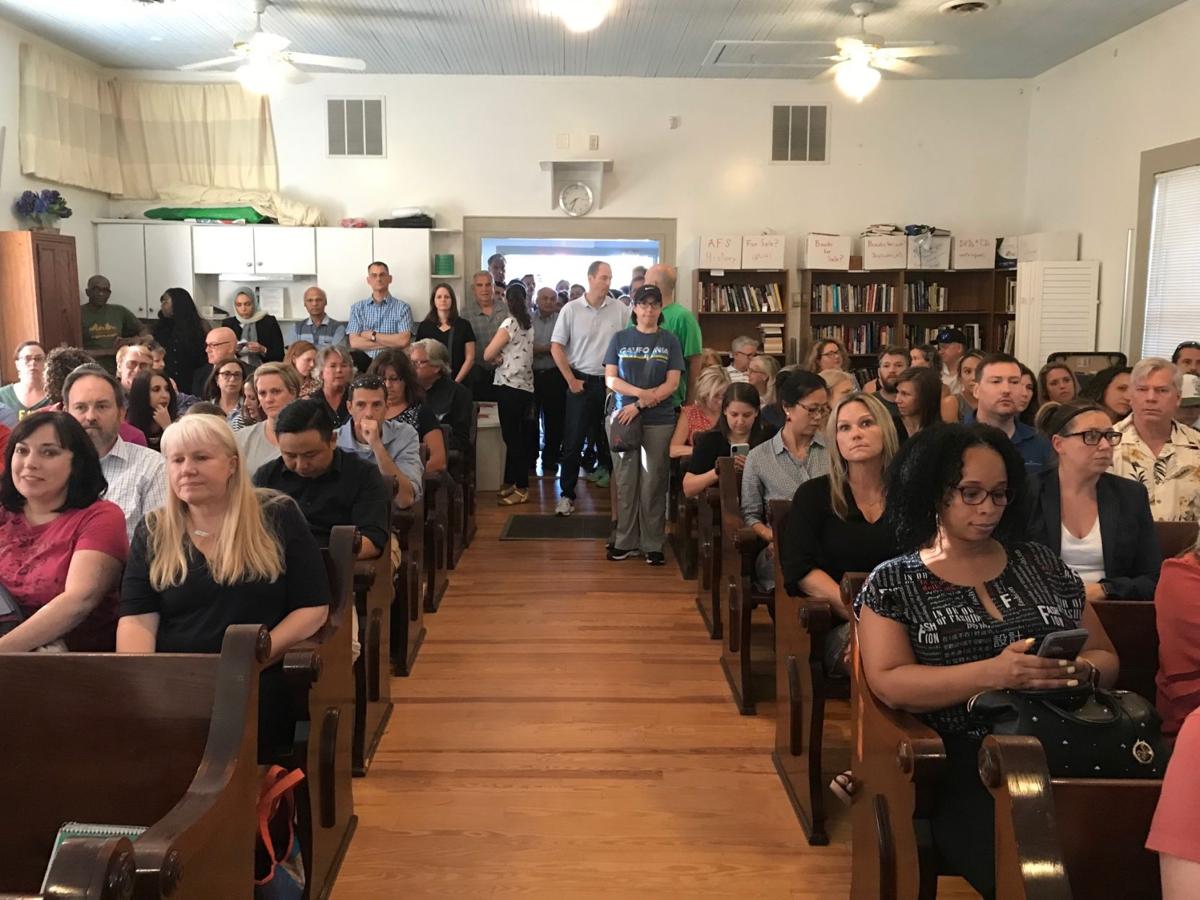 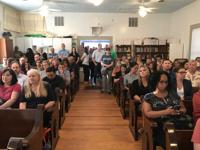 SpecialA packed room of people gathered to discuss concerns of toxin levels in the air at the Atlanta Free Thought Society building in Vinings. 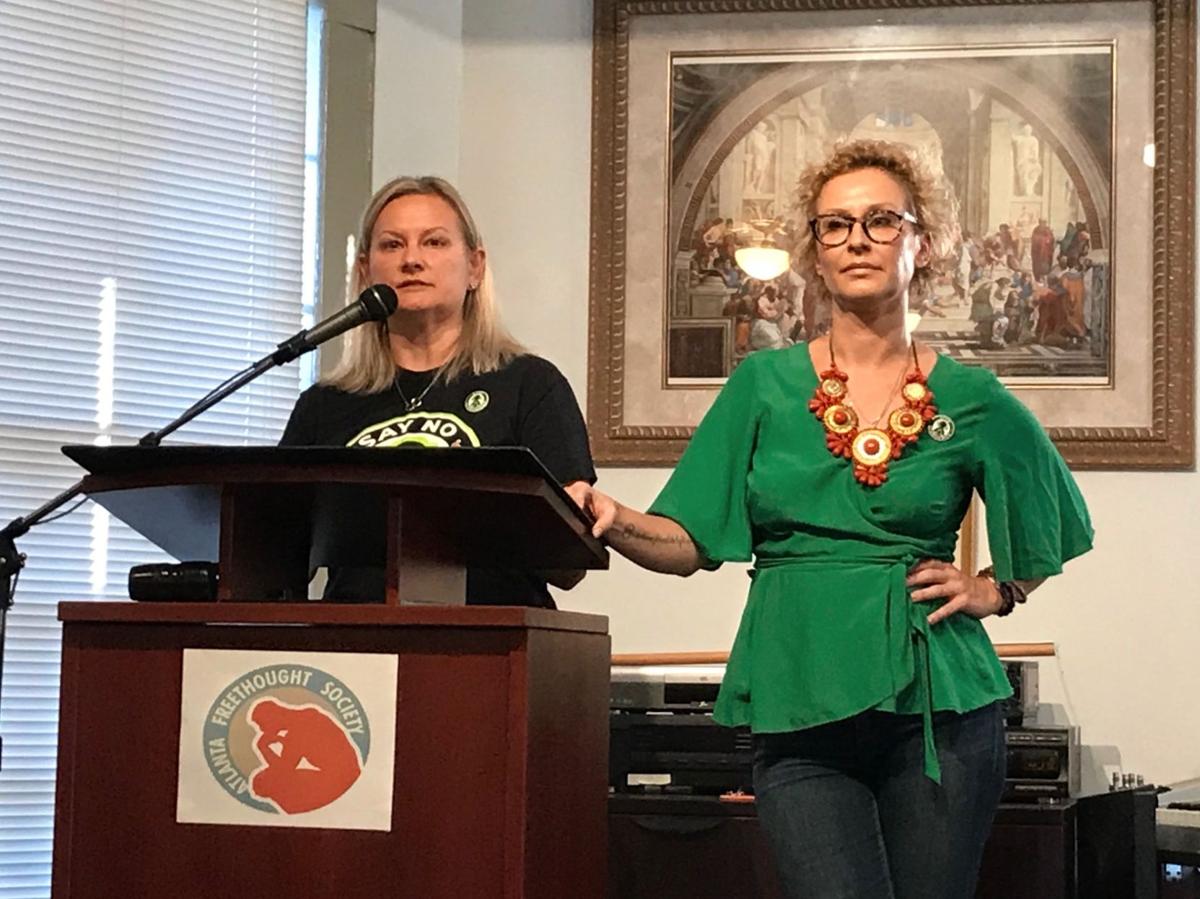 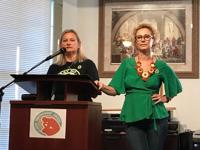 SpecialAttorney Margie Donnell, left, and fellow community activist Neringa Zymancius flew to Atlanta to address the crowd in Vinings Wednesday. The two are involved in disputes in Willowbrook, Ill. over emissions from a Sterigenics plant there.

SpecialA packed room of people gathered to discuss concerns of toxin levels in the air at the Atlanta Free Thought Society building in Vinings.

SpecialAttorney Margie Donnell, left, and fellow community activist Neringa Zymancius flew to Atlanta to address the crowd in Vinings Wednesday. The two are involved in disputes in Willowbrook, Ill. over emissions from a Sterigenics plant there.

VININGS — Outraged residents worried about toxic emissions from the Smyrna Sterigenics plant are mobilizing to shut it down.

Smyrna resident Tony Adams reached out to officials as soon as he learned about the issue. He became emotional while explaining why this hit home for him. His mother died of cancer when he was 16, and he lost several friends to cancer before their 40s. He’d grown up near a chemical plant that was eventually declared an EPA Superfund site.

“I swore as a 16-year-old, if I ever felt that I was being put in that situation again, I’m not going to sit around and wait for someone to do something,” he said at a town hall meeting at the Atlanta Free Thought Society building in Vinings. “So I’m sorry if some of you are upset with me because of our property values, but this is bigger.”

Adams reached out to attorney Margie Donnell, who was already a year into a fight with Sterigenics in Willowbrook, Illinois. She and fellow community activist Neringa Zymancius both flew to Atlanta to address the packed room Wednesday that had people standing in the back and sitting in the aisle.

The MDJ first published the story July 20 after a report released by Georgia Health News and WebMD revealed elevated levels of ethylene oxide, a cancer-causing chemical, in the air. Ethylene oxide is used to sterilize medical equipment. The Illinois-based company Sterigenics uses the chemical at its plant south of Atlanta Road near the Chattahoochee River.

In 2016, the EPA reclassified ethylene oxide from a probable human carcinogen to a human carcinogen, but according to Donnell, they have not updated the regulations for what is considered a risk for long-term exposure.

Since the geographical areas affected change with the weather and wind direction, Donnell and Zymancius emphasized the importance of getting the surrounding communities involved. Though many of the attendees came from Cobb, some were from Fulton County and the city of Atlanta.

The city of Willowbrook, Illinois, was able to recruit help from neighboring villages Darien, Hinsdale and Burr Ridge, which are financially assisting with the fight against Sterigenics.

“All of those towns have gotten on board and filed motions to join the lawsuit against them because they are being affected. But they have no control. They’re not the ones able to say get out,” Donnell said.

Attendee Jeff Hochberg said he was extremely distressed to learn his family could be breathing contaminated air. Adding to his concern, he lives in Fulton County right across the Chattahoochee River from the coal ash ponds of Plant McDonough. He’s convinced his family’s health issues, which include migraines and a brain tumor, are not a coincidence.

Despite the Smyrna address, the city of Smyrna says the plant is outside their jurisdiction and in unincorporated Cobb County, which has shifted the focus of many citizens to contact Cobb’s Board of Commissioners, Commissioner Bob Ott in particular, since the plant is in his district. Ott has said he intends to meet with environmental experts on Aug. 1.

Air testing is key, Donnell told the crowd. Sterigenics was aware of the testing schedule in Willowbrook, so the mayor paid for independent testing done for 30 days straight. The results led to the governor shutting down the facility, but the company is in court fighting to resume operations, Donnell said.

“We will fight until they are gone for good and we hope that you will do the same,” she said.

State Sen. Jen Jordan, D-Buckhead, and state Rep. Erick Allen, D-Smyrna, have spoken with the president of Sterigenics, and the company has since issued a statement saying they will be applying to the Georgia Environmental Protection Division for approval of new emissions reducing technology.

Donnell criticized the company’s response. She said she located articles on microfiche from 1989 and 1996 in which Sterigenics was accused of polluting with ethylene oxide. Both times the company said it was adding control measures to reduce emissions. Just last year, the report was released about the air quality in Donnell’s Illinois community.

“Sterigenics says, hey guess what, we just added control measures to reduce emissions by 90%,” Donnell said. “Then everybody wonders why we don’t believe them, why we don’t trust them.”

In a previous MDJ article, Sterigenics defended its operations, saying it safely operates within regulations but will further address environmental concerns in the wake of news reports suggesting its Smyrna plant has cancer-causing potential.

However, the company went on to acknowledge the concern surrounding emissions of ethylene oxide, saying in a statement it has “consistently taken voluntary steps to reduce emissions over the past five years,” resulting in the reduction of 90% of the emissions at the facility near Smyrna. The company also committed to installing further emissions-reducing measures in the next 12 to 14 weeks, should the Georgia Environmental Protection Division permit the action.

A community meeting with Sterigenics is set for 7 p.m. Tuesday at Campbell Middle School, according to Jennifer Bennett, spokeswoman for the city of Smyrna. Representatives from the company as well as elected officials from the state, county and Smyrna are expected to attend.

Why isn't the County and/or State closing this plant until there are zero emissions? We're looking at a tremendous liability if our leaders don't take action.

In all of these articles they mis represent what this industry does. It is not just medical equipment. It is medical devices. These are the things that save lives. Heart valves, stents, embolic filters. Essentially everything that is used in the operating room or is labeled sterile. The shutting of the Willowbrook plant inevitably killed more people than the risks posed by the emissions of EO from these plants. Especially since EO is released from nature such as rotting bananas. Maybe we should all throw away our bananas too.

Are you kidding me? Because they are trying to save money they are slowly killing Us and you think thats ok? Idiot

'This can't go on': Idaho Sen. Jim Risch poised to be top GOP voice on foreign policy, calls for cooperation to counter China