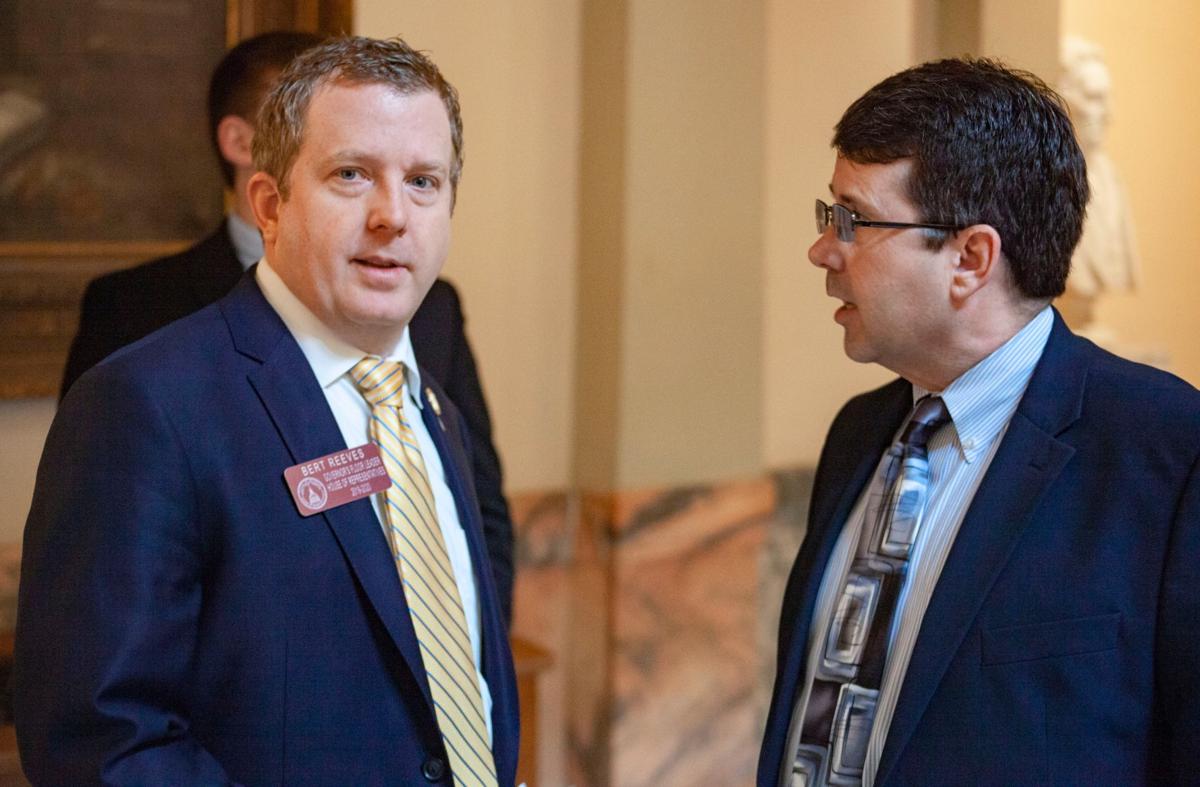 State Rep. Bert Reeves, R–Marietta waits for a press conference to begin at the State Capitol during the during the first day of the 2020 legislative session. 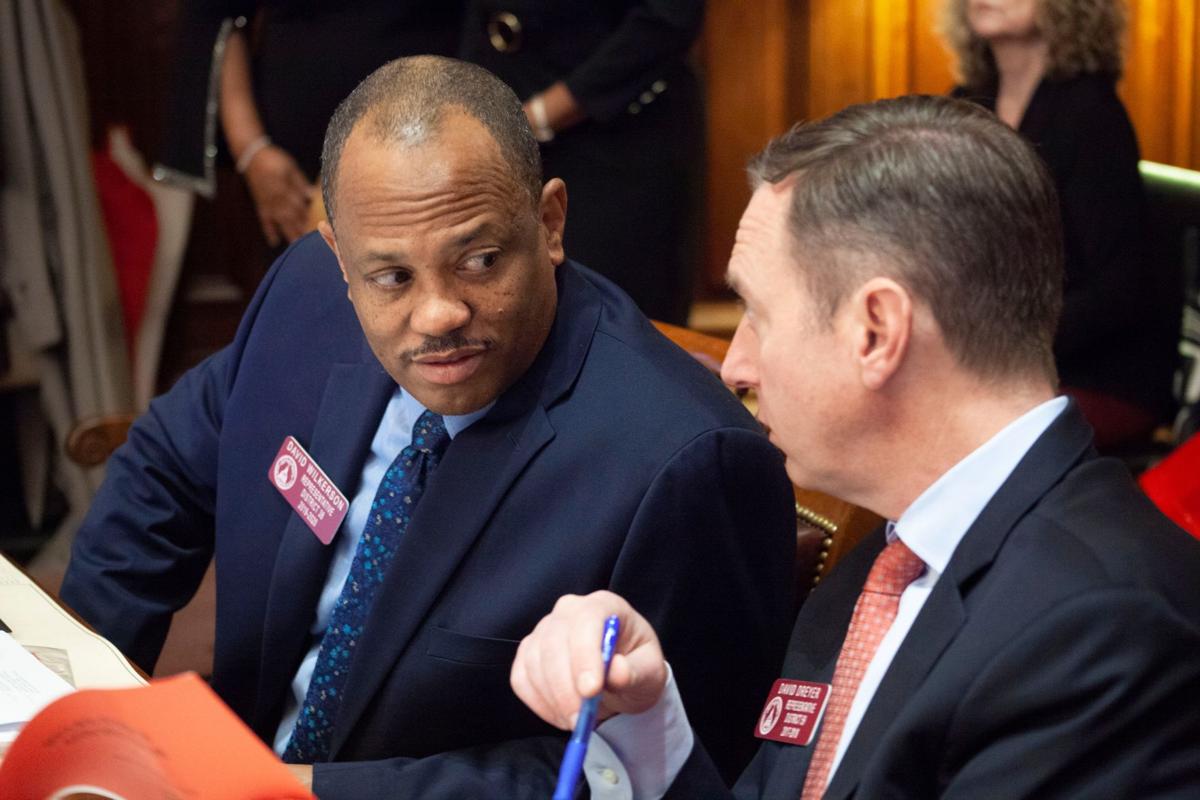 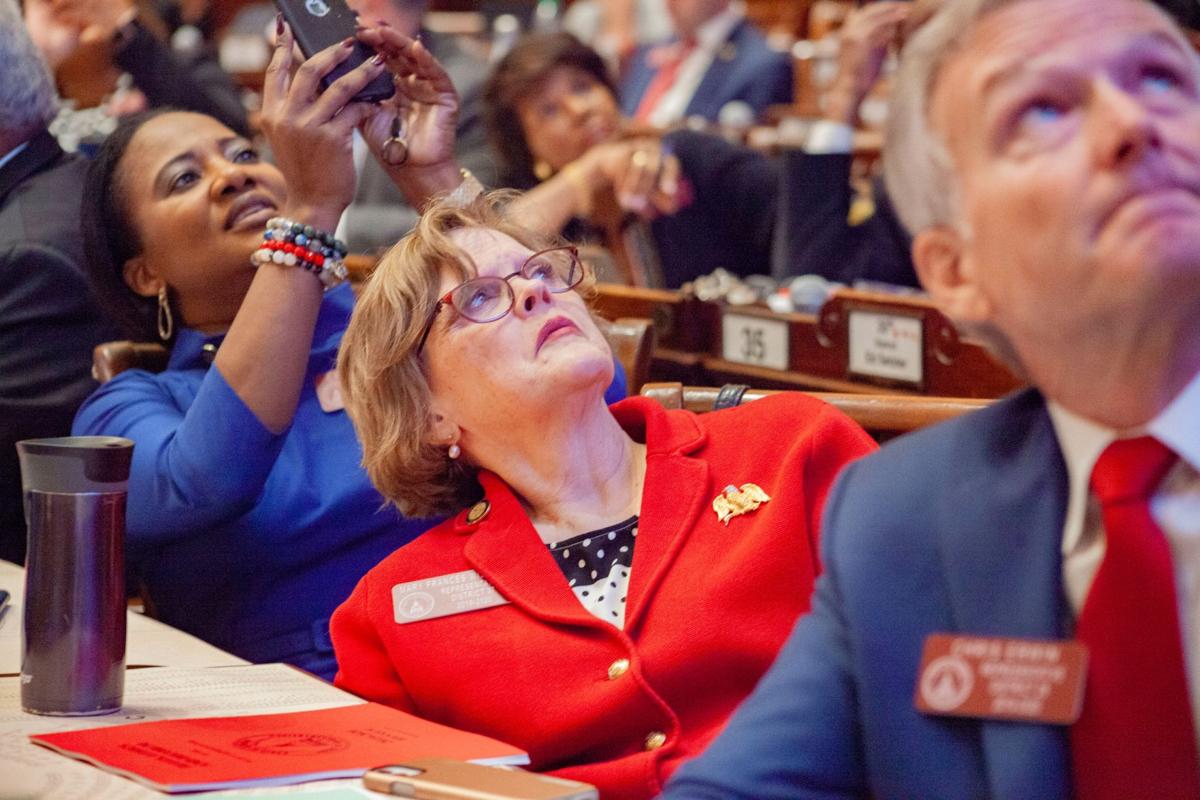 It’s just Day 1 and already things are looking up. Once the legislative schedule was posted in the well of the House, legislators, including Rep. Mary Frances Williams, D-Marietta, peered skyward for the information. The Georgia General Assembly kicked off its 2020 session Monday.

State Rep. Bert Reeves, R–Marietta waits for a press conference to begin at the State Capitol during the during the first day of the 2020 legislative session.

It’s just Day 1 and already things are looking up. Once the legislative schedule was posted in the well of the House, legislators, including Rep. Mary Frances Williams, D-Marietta, peered skyward for the information. The Georgia General Assembly kicked off its 2020 session Monday.

ATLANTA — The 2020 legislative session began Monday morning, and as the state looks for ways to pinch pennies, Cobb lawmakers are taking aim at costly education programs and coal ash pollution of Georgians’ water, among other priorities.

As has been the expectation, Reeves said the budget will dominate the limelight. Budget week begins next week, he said.

Passing a balanced budget is the sole constitutionally mandate to state lawmakers, but budget decisions will be put under a microscope this session following an order last fall to slash government programs.

With tax revenues running well below projections, Gov. Brian Kemp has ordered most state agencies to reduce spending by 4% during the current fiscal year and 6% in fiscal 2021, which starts July 1.

With the budget at the top of mind, Reeves, the governor’s floor leader, said he intends to present a revenue-saving education bill to the Senate Higher Education Committee on Wednesday.

Reeves proposed the Dual Enrollment Act during the General Assembly’s 2019 session, but he said the newly tweaked bill is ready for passage this session. The bill would limit the number of taxpayer-funded college courses a student may take while still attending high school.

As long as they meet the requirements of a participating college or technical school, Georgia high school students are able to take as many college courses as they wish on the taxpayers’ dime prior to their graduation.

The newest iteration of the bill, which Reeves said he’ll present in detail in committee on Wednesday, will no longer allow students to take any course they like at the expense of Georgia taxpayers. Should his bill pass this session, it would take effect July 1, Reeves said.

“The reason why we’re pushing this at the onset of session is that the budget picture, as we get ready to go into what’s going to be a difficult budgeting year ... we want to have this issue resolved as soon as possible, so we know the impact that dual enrollment is going to have on our budget,” he said. “Every program counts, and the money that potentially will be allocated from reforming and sustaining dual enrollment is money that’s going to be very valuable in other aspects of the budget.”

But while they search for ways to address the state’s revenue shortfall, state Rep. David Wilkerson, D–Powder Springs, says Republicans are also pushing for a nonsensical income tax rate cut from 5.75% to 5.5% this year. If passed, the lower rate would be retroactive to Jan. 1.

Wilkerson, who chairs the Cobb Legislative Delegation, estimated the tax cuts would cost the state between $500 million and $600 million, while most taxpayers would only see a savings of up to $60 per year.

“I’m shocked that they’re pushing this, because if you listen to everyone, they’re saying that we have a revenue issue ... and then you’re talking about cuts. The question becomes, ‘Why?,’” he said. “It doesn’t make a lot of sense, but it does when you look at the fact that it’s an election year.”

Referring to recent recommendations from a study committee on maternal mortality in the Peach State, Wilkerson said he favors leaving the tax rate unchanged, saving money and investing in programs that, for example, fight the maternal death rate.

“I think if you go up to the average person and say would you be willing to ... continue to pay $5 a month so that your neighbor can live when they have a baby, then I think most people would say yes,” he said.

In response, Reeves said if Democrats are looking to bring in revenue by raising taxes, “they should just come out and say it.”

Reeves said Democrats can’t point to one proposal as the culprit for the recent revenue shortfall.

“As has been discussed, the General Assembly has been very generous with a lot of tax credit programs,” Reeves said. “We still have yet to create an equalization with internet sales tax collections. And assuming that we can figure out how to capture that ... that’s a significant piece of the puzzle that can help alleviate some of where our revenues are falling short right now.”

Coal ash discussion, State of the State on the horizon

The bill was filed hours after the state House and Senate’s adjournment Monday and is expected to be read for the first time on Tuesday.

Georgia law states that household waste must be disposed of in municipal solid waste landfills that have bottom liners and leachate collection systems to ensure that garbage and liquid wastes do not pollute our groundwater, according to a news release on the bill. State code, however, does not require coal ash to be disposed of in lined facilities.

“My constituents are worried, and they are right to be worried,” Williams said. “Coal ash is bad stuff.”

More news will likely come after the governor lays out his priorities in the State of the State address to be held on Thursday, according to Wilkerson. The delegation chairman said some lawmakers are waiting to hear from the governor to know what obstacles or headwinds they’ll encounter in passing legislation.

Regarding more local issues, Wilkerson said the Cobb legislative delegation will hold its first meeting on Jan. 27. He said over the course of several meetings the delegation will take on local topics including:

♦ Whether the Marietta Housing Authority should be allowed to operate in unincorporated Cobb County. Wilkerson said Cobb County Commission Chairman Mike Boyce will be brought in to discuss the issues;

An update on the Sterigenics plant near Smyrna, which has been closed since late August for the installation of improved emissions controls. The county has since opened an investigation regarding the facility’s compliance with county health and safety regulations. The facility remains closed pending the conclusion of that investigation.♦