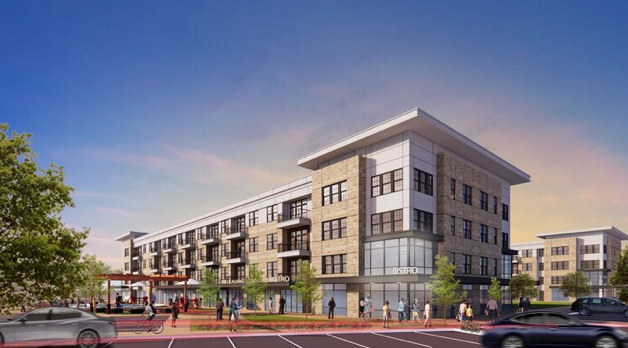 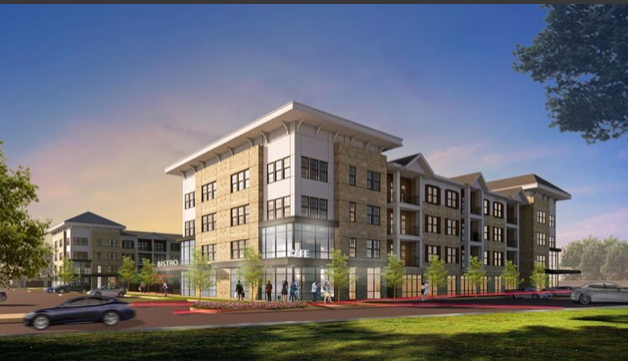 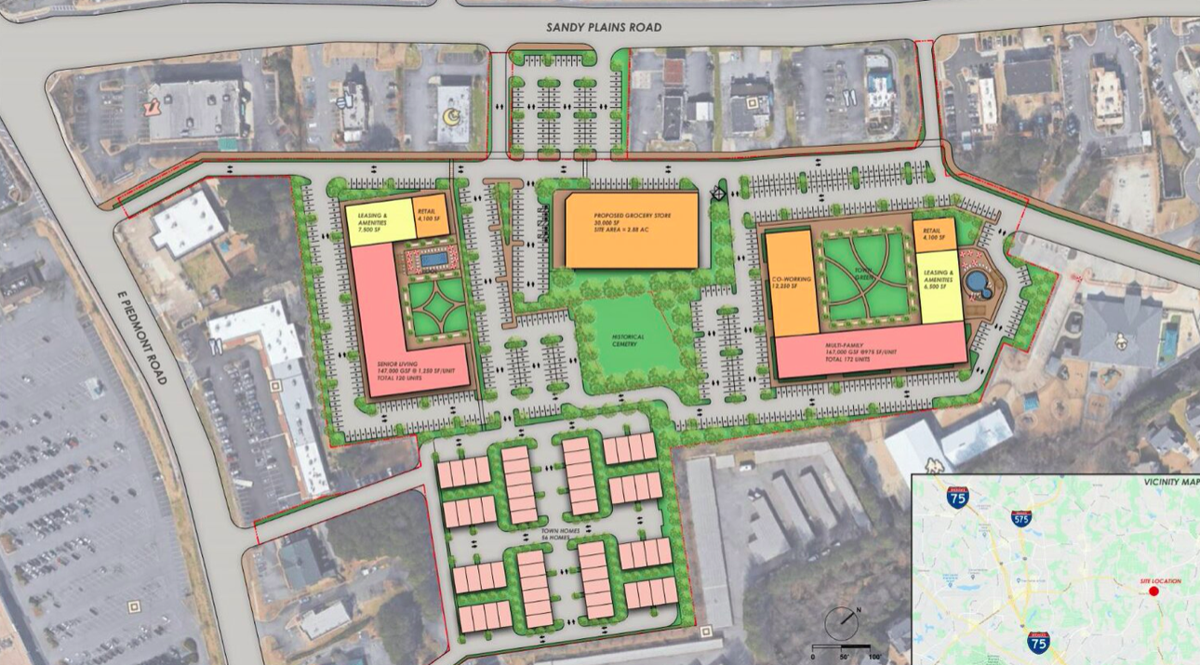 Atlantic Residential released a site plan for the Sparyberry Crossing redevelopment, which it hopes to complete by late 2022. 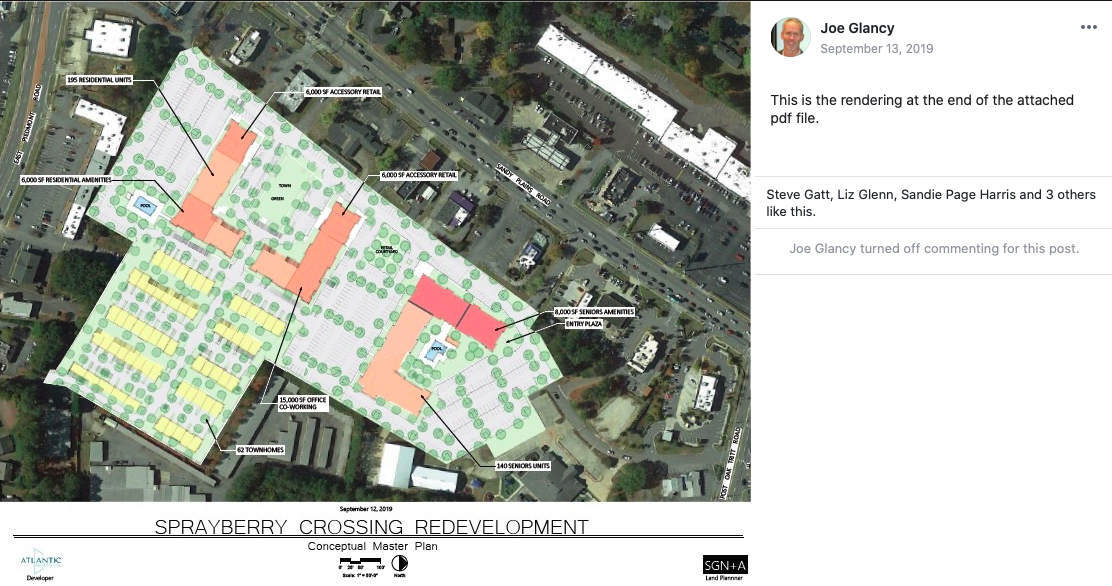 In September, Atlantic Residential released a site plan for the Sprayberry Crossing site, seen here, that it later removed.

Atlantic Residential released a site plan for the Sparyberry Crossing redevelopment, which it hopes to complete by late 2022.

In September, Atlantic Residential released a site plan for the Sprayberry Crossing site, seen here, that it later removed.

Renderings of the proposed redevelopment of a mostly vacant, dilapidated shopping center in east Cobb were unveiled by developer Atlantic Residential this week.

Since site plans for Sprayberry Crossing shopping center were released in September — and then pulled — most features, such as the number of residential units and the amount of retail space, have been downsized. But there is one major addition to the proposed redevelopment.

The complex is now slated to include a 30,000 square-foot “national grocer,” according to a website owned by the developer.

The website also lays out the development’s timeline. If everything goes according to plan, retail and residential spaces should be open by the end of 2022.

The state of the shopping center led to the 2017 birth of the Sprayberry Crossing Action Facebook group, aimed at pressuring the property owners into action. Area resident Joe Glancy heads the group.

“Both Shane (Spink) and I still intend to have a public discussion and answer session with the developer at a later date, but BEFORE any potential zoning hearing,” Glancy wrote in a Facebook post Monday. “Based on my discussions with (North Cobb) Commissioner JoAnn Birrell, I would not anticipate the resumption of zoning meetings until mid-summer at the very earliest. As of last week, the developer had not attempted to even get on the agenda for a future zoning meeting. So this is not going to happen quickly.”

Glancy was able to secure the Sprayberry High School gym for a March 31 meeting at which the developers would present their plans for the site, but the meeting was scrapped due to concerns about the coronavirus, Glancy wrote on Facebook.

In addition to the grocer, the plans released this week include:

“This project will offer the quality and sustainability of other much larger well known mixed-use developments like Avalon and Ponce City Market, albeit on a much smaller scale,” the project’s website reads.

Birrell said Thursday she could not comment on the proposed plans for the shopping center, as developers have not filed a zoning application. But, she said, as she understands it, this stage of planning is meant for the developers to gather public feedback before filing a final proposal.

Once site plans are final and a zoning applications are filed, Birrell said she'll host a community meeting with her appointed planning commissioner and county staff.

The commissioner also noted that the property owners, Sprayberry Crossing Partnership, are still paying a blight tax on a portion of the property, which multiplies the usual property tax by seven.

When property owners failed to bring the portion of the site up to standard by the end of 2018, Birrell said an increased tax was levied at the start of 2019.

At last estimate, the county said the blight designation was expected to take the annual tax bill for the 3.4-acre portion of the property from about $3,100 to nearly $22,000.

Birrell said the property owners will continue to pay the tax until the problems identified are remedied.

For more information on the new Sprayberry Crossing proposal and to fill out a community feedback form, visit sprayberrycrossing.com.

Cobb schools to move to Monday through Thursday online learning

Cobb schools announced Friday that it would be moving to a four-day school week, effective Monday, for the remainder of the 2019-20 school year.

How COVID-19 has changed losing a loved one

MARIETTA — As the coronavirus has spread around the nation, more stringent guidelines on social gatherings and distancing have taken effect, c…

Cobb school board to consider $4.6 million in roof replacements

The Cobb school board will consider approving $4.6 million in roof repairs at four schools, among other items, during online meetings beginnin…

There is massive opposition to apartments in East Cobb. Check out the "Residents against apartments at Sprayberry crossing" page on facebook to see the strong opposition. The PR ploy they are using does not change the fact that this could be redeveloped without a rental component.. Using the same hand picked supporters to push their agenda as before, they are presenting the same basic plan. They have made zero effort to work with the members of the opposition. But now to say it is for seniors is hard to believe. What senior is going to want an apartment overlooking at cemetary? A few years from now this will likely end as an apartment complex for Kennesaw State students.

Rome, Floyd students arrive for their first day of school

Calhoun, Gordon County schools, back in class, will report COVID-19 cases each Friday

7 seek to follow Lewis in House, but long-term prospects dim