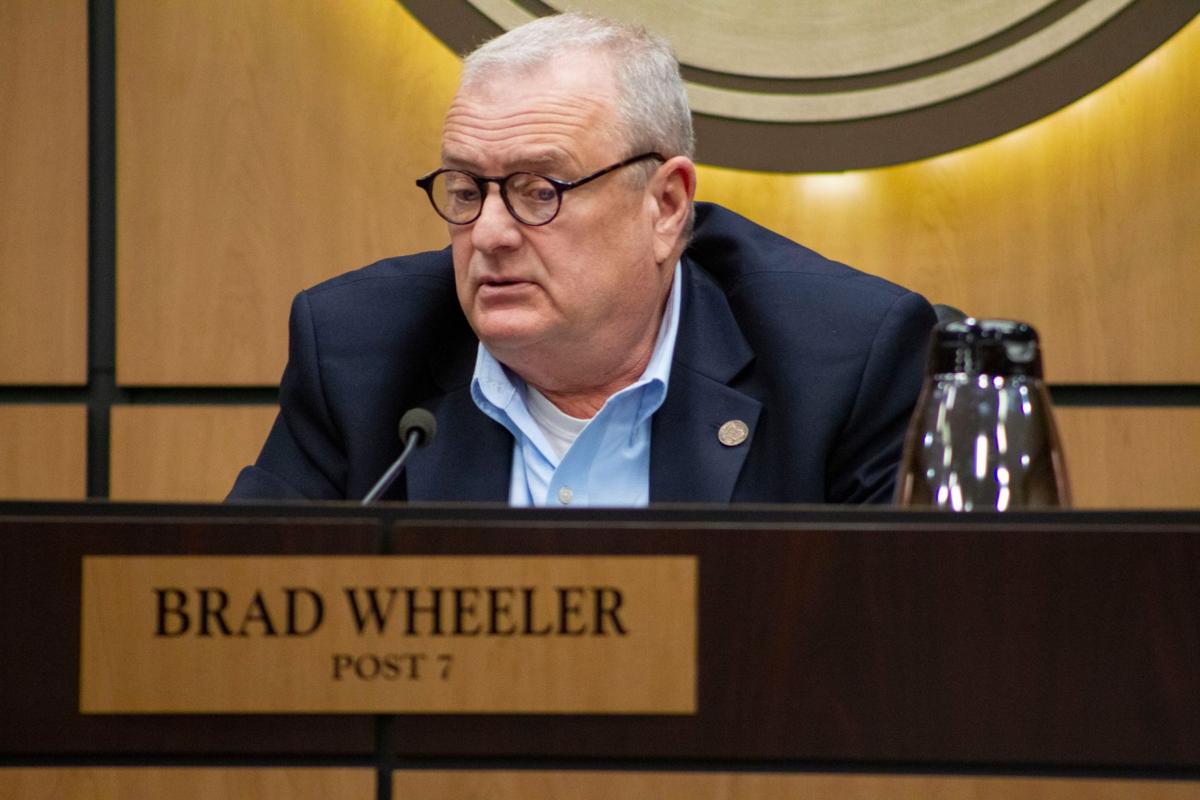 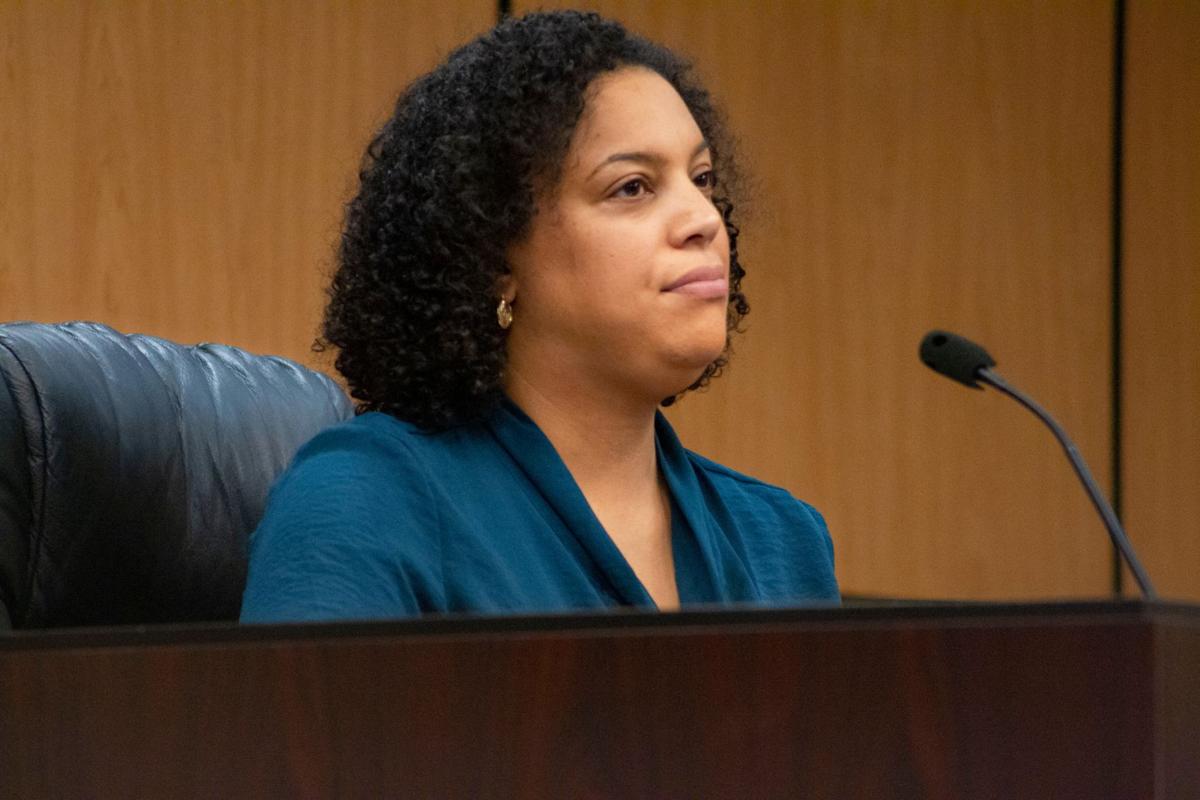 Charisse Davis, a second-year board member on the Cobb County school board, spoke up after votes on Tuesday naming Brad Wheeler as the board’s chair and David Banks as vice chair. 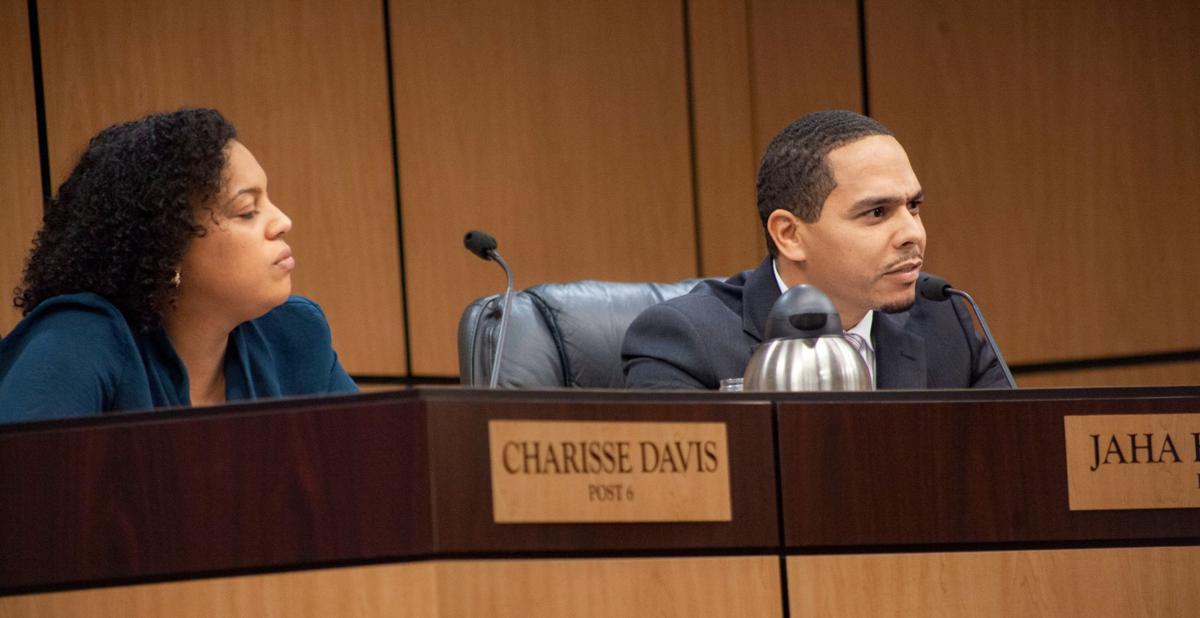 Charisse Davis, a second-year board member on the Cobb County school board, spoke up after votes on Tuesday naming Brad Wheeler as the board’s chair and David Banks as vice chair.

MARIETTA — Cobb school board member Dr. Jaha Howard said Tuesday that racial and gender discrimination, as well as a political agenda are all possible factors in the naming of Brad Wheeler and David Banks as chair and vice chair, respectively.

Wheeler, as well as other Republican colleagues on the board deny those claims.

Sparks flew during a board discussion following a 4-2 vote — down party lines — naming Wheeler chair and the same vote naming Banks vice chair.

Democrats Howard and Charisse Davis, both of whom joined the board in 2019, were the two votes in opposition in both cases. Board member David Morgan, also a Democrat, was absent from the meeting.

Howard, whose nominations for Davis to serve as chair and vice chair both failed earlier in the meeting, took to the microphone first.

Howard bemoaned the speed and lack of discussion with which the board moved through its chair and vice chair votes, adding board members should more openly discuss their decisions so colleagues and the public can hear them.

“We get up in front of people, and we have a quick vote — hurry, hurry, no questions asked, nothing to see here, folks. That’s what it comes across as,” he said.

Declining to name which individuals, Howard, one of three Democrats on the Republican-majority and seven member board, said in conversations with board members over the last year regarding Davis’ interest in the chair role, he’d been told she was too inexperienced, that she spoke up too much or that other board members would do a better job. But he questioned whether the Republicans had ulterior motives.

“That’s this year, and then next year, it’ll be another thing,” he said during the board’s discussion. “All I know is something stinks, and I don’t know if it’s personal preference. ... Is it personal preference, is it gender bias, is there a racial bias? ... Is it a political party bias, because I know we’re a partisan board? I know, for me, we don’t get any marching orders from the Democratic Party in Cobb County. ... The public deserves to hear why you’re choosing somebody, what’s going on, and we can get to the bottom of it.”

He later told the MDJ that the Cobb GOP has “way too much influence on our school leadership and policies.”

“They know exactly who they are,” Howard said, also noting the board’s chairmanship has not historically reflected the diversity of the county. “It’s sad that some leaders need their party’s blessing before advocating for the educational needs or our children.”

Wheeler, newly seated at the center of the dais, denied Howard’s accusations of the board following Republican Party “marching orders” in naming a certain chair or vice chair and said Howard should ask each individual member of the board why they voted the way they did.

“I’ve been in this situation before,” Wheeler said, referencing his previous role as chair in 2018. “(Sometimes) I’m elected and other times I’m not elected. It is what the makeup is and who the board majority has confidence in.”

For her part, Davis echoed Howard in listing the reasons she’d been told by fellow board members that she wouldn’t be supported as chair.

Davis also said that she’d been told last year when she joined the board that political parties were “watching us.”

“That only meant the Republican Party,” she said.

Davis declined to comment on the discussion after the meeting.

Jason Shepherd, chair of the Cobb County GOP, told the MDJ he was “dumbstruck” by the suggestion that the party would have somehow chosen which members would lead the board in 2020.

Calling Howard and Davis “the two hyper-partisan members of the school board,” Shepherd said any partisanship on the board has been thanks to the two Democrats, who he said have tried to make it even more partisan in their first year.

“It is hardly a surprise after the year of obstruction and partisan stunts by only two of the three Democrats on the board that the Republicans who fundamentally disagree with their political philosophy and partisanship would not vote for Davis for chair or vice chair,” Shepherd said. “If they want to point fingers, it should be at each other.”

Wheeler and board member Randy Scamihorn also told the MDJ that Howard’s claims he’d spoken on the phone with them about the chairmanship were false. But Wheeler did acknowledge an email that Davis sent to all board members last month.

The email, dated Dec. 21 and obtained by the MDJ through an open records request shows the board member had been expressing her concern about board partisanship preventing her from serving as the 2020 chair.

Davis wrote that the board has historically shared leadership, but as of late has moved to “recycle leadership opportunities amongst the same couple of people,” something she said is not in the best interest of the district.

“I take my role as school board member very seriously, and welcome the opportunity to serve in an increased capacity as chair. I have been hard at work over the last year, including hosting community meetings and meet and greets, and writing a monthly newsletter that includes educational issues and explains board agenda items. Additionally, as someone who has recently taught in public schools and has two children in our schools, I pore over research, articles, and books about education,” her email states in part.

In response to Howard and Davis’ concerns, Wheeler had a closing message during discussion at Tuesday’s meeting:

“I will work with all board members on their concerns and issues ... and I think this position represents all of us (collectively) and our differences. And hopefully we can mend those differences and work together for the betterment of our school district and our children.”

In other business, the board approved the 2020 board meeting schedule by a 5-1 vote. Davis, citing her desire to hold board work sessions and meetings on separate days, was the sole no vote.

Time to pull the card issue.

the remarks from GOP members of the board are dis-ingenuous and attempts to cover up the naked truth of cronyism to cover their racial insecurity.[ohmy][ohmy]

If it wobbles and quacks, should I call it a skunk?

Oh, pullese! Those from the far left are so predictable. You don't agree with something, so you call people names. The radical far left vocabulary is limited to: Racist, Sexist, Homophobic.

Do you have anything of substance to offer?