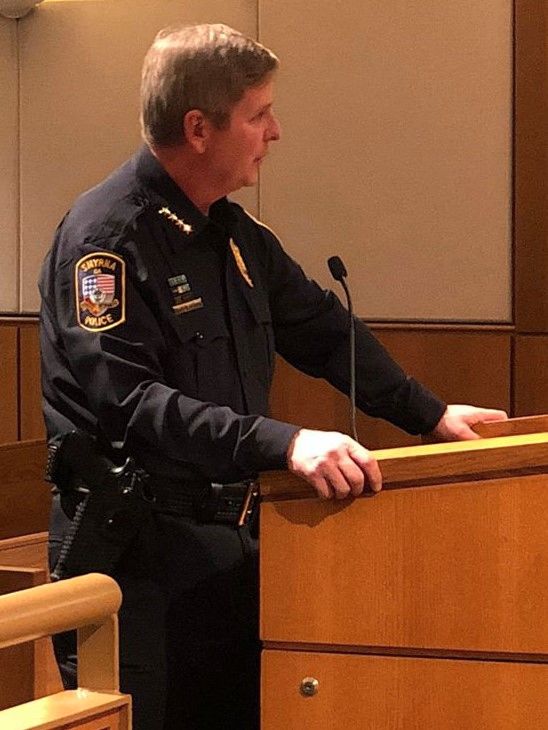 Smyrna Police Chief David Lee announces his retirement, after seven years in the job, at the City Council's meeting on Monday night. 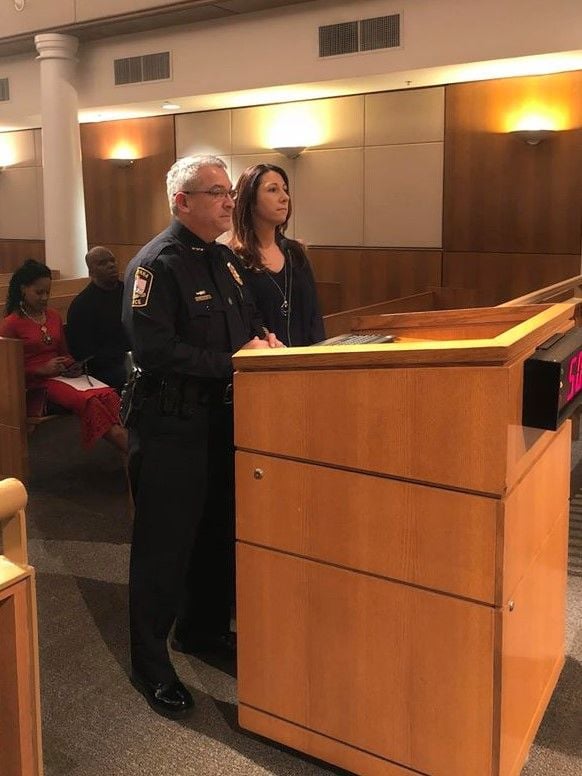 Smyrna Deputy Police Chief Joe Bennett and his wife Mary Bennett at the City Council's meeting Monday, when members voted to promote Deputy Chief Bennett to the position of Police Chief upon the retirement of current Chief David Lee. 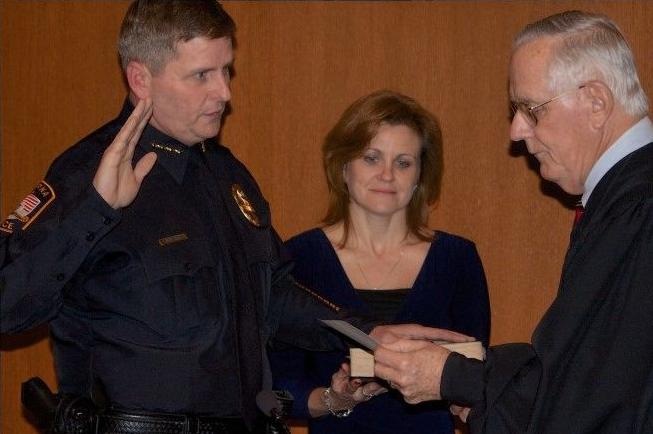 Smyrna Police Chief David Lee announces his retirement, after seven years in the job, at the City Council's meeting on Monday night.

Smyrna Deputy Police Chief Joe Bennett and his wife Mary Bennett at the City Council's meeting Monday, when members voted to promote Deputy Chief Bennett to the position of Police Chief upon the retirement of current Chief David Lee.

Smyrna Chief of Police David Lee is retiring, making way for one of his deputies to take over.

The move was made official Monday night at the Smyrna City Council’s regular monthly meeting when members approved an agenda item to appoint Operations Deputy Chief Joe Bennett as chief of police upon Lee’s retirement.

The change is effective Friday and was announced on the city’s public Facebook page with photographs of Lee and Bennett fronting the council.

Lee, 61, has been Smyrna’s top police officer for the last seven years. He joined the Smyrna Police Department as the chief in February 2013, aged 54, planning to be in the role between five and 10 years.

“I’m kind of going out on the top of the game, if you will,” Lee told the MDJ on Tuesday. “I’ve achieved so many things.”

Lee said he started thinking about retirement in December. He wants to be able to spend more time with his family, especially his five grandchildren, aged between 2 and 7, who are spread throughout the metro Atlanta area.

But Lee said he won’t turn his back on the community, and will remain living in Smyrna with his wife, Lisa.

“I’m one of those chiefs who wears the uniform 99% of the time,” he said. “There’s no question I’m going to miss the men and women of the Smyrna Police Department family, they’ve been so good, but I’m not going to be a stranger.”

Before joining the Smyrna police, Lee was with the Marietta Police Department for 31 years, rising through the ranks from patrol officer to deputy chief.

Even as a boy, he knew he wanted to be in law enforcement, joining the explorer program in high school. Prior to joining the Marietta police, Lee served three years in the United States Army Military Police Corps.

In his role as Smyrna Police chief, Lee implemented several community outreach programs and gained the department state certification in early 2019 — one of his biggest accomplishments in the job.

It took about two and a half years for the department to reach all state standards, Lee said. The biggest hurdle was the evidence room, which had to be reorganized.

“Without naming any names, somebody dropped the ball,” Lee said. “We weren’t missing evidence, but it took us almost two years to really go back and inventory everything and make sure we had it. We also created a new system in doing that, bought the software program and got everything organized.”

Former Smyrna Mayor Max Bacon, who just retired himself, said Lee’s leadership over the last seven years meant he never had to worry about the police department.

“He just brought another level of professionalism to that department,” Bacon told the MDJ on Tuesday. “When the previous chief retired, Lee was the No. 1 choice.”

Bacon said Lee was smart to surround himself with “good folks” like Deputy Bennett and Administration Deputy Chief Robert Harvey.

“They both have the qualifications to be the next chief,” Bacon said of Bennett and Harvey, who have both been with the Smyrna Police Department about 25 years.

“That is a good example of the leadership that Lee provided, in that we didn’t have to go outside the department to search for a new chief, and that’s the way it ought to work,” Bacon said. “He had men below him and responsible to him that could step in at any time, and I think that in itself is a good indication of leadership.”

Bennett began his career with the Smyrna police in March 1995, according to his biography on the city’s website. He has worked in the divisions of community policing, street crime, criminal investigations, 911, administrative services and SWAT (Special Weapons And Tactics).

A Cobb County police officer almost crashed while in pursuit of a stolen vehicle as the suspect swerved all over the road, at one point striki…

Acworth police busted an illegal drug dealing operation when they pulled over a Maserati on Cherokee Street, finding the driver in possession …

A Marietta man is dead after being hit by a car while cycling in the city of Ball Ground in Cherokee County, authorities confirmed.

U.S. Rep. Lucy McBath, D-Marietta, maintains a solid lead against her rivals in fundraising for this year’s election to represent Georgia’s 6t…