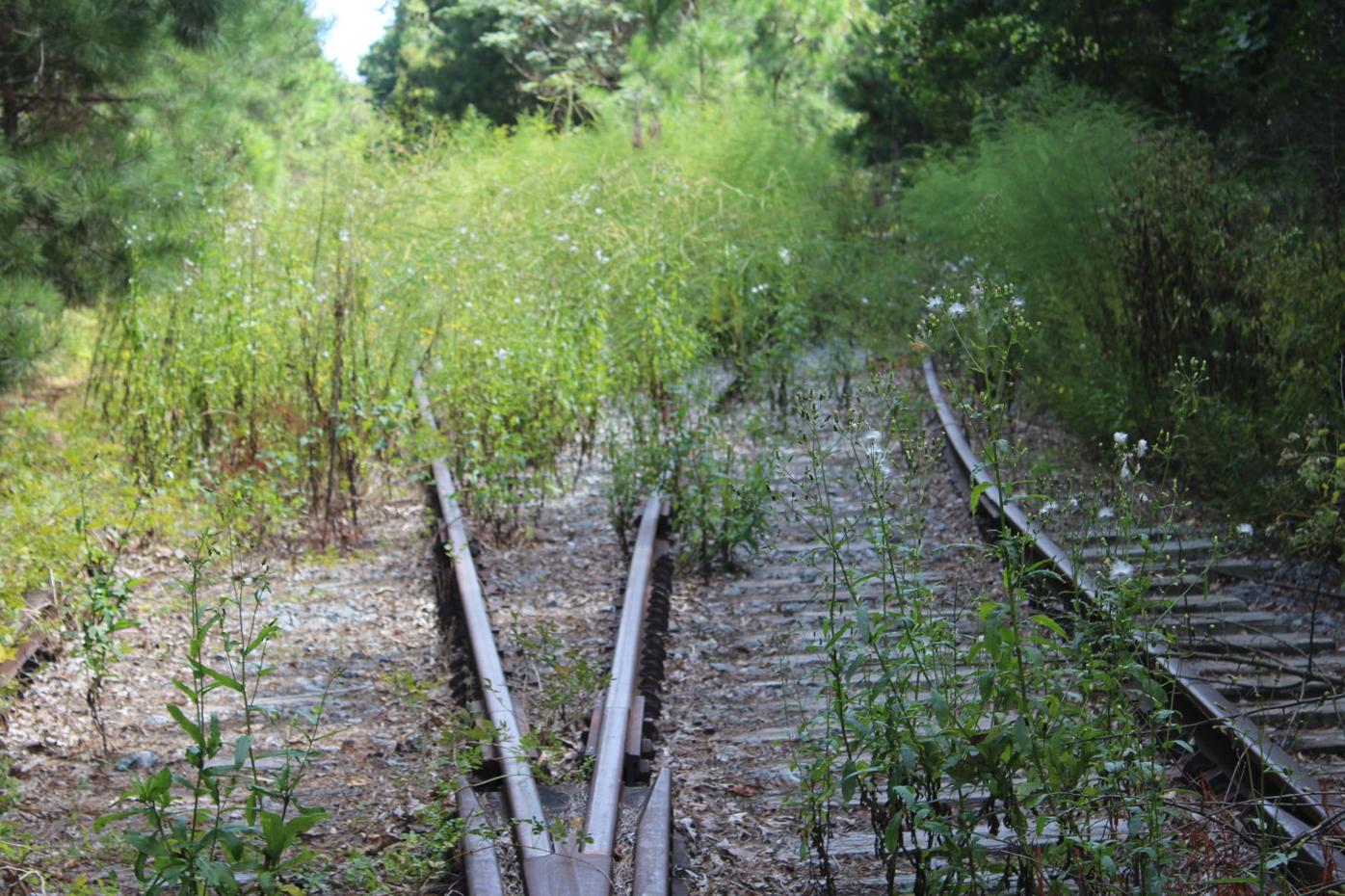 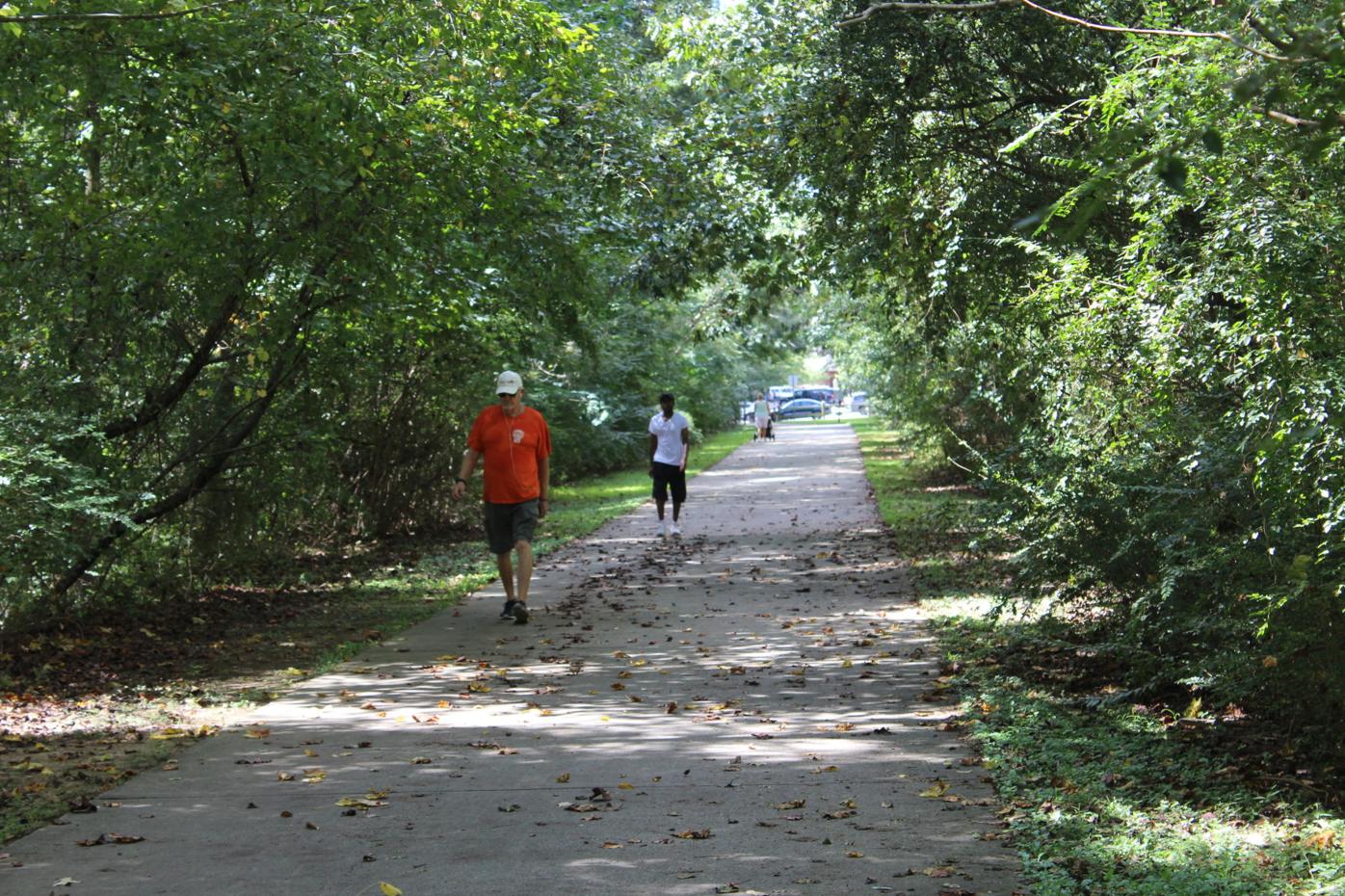 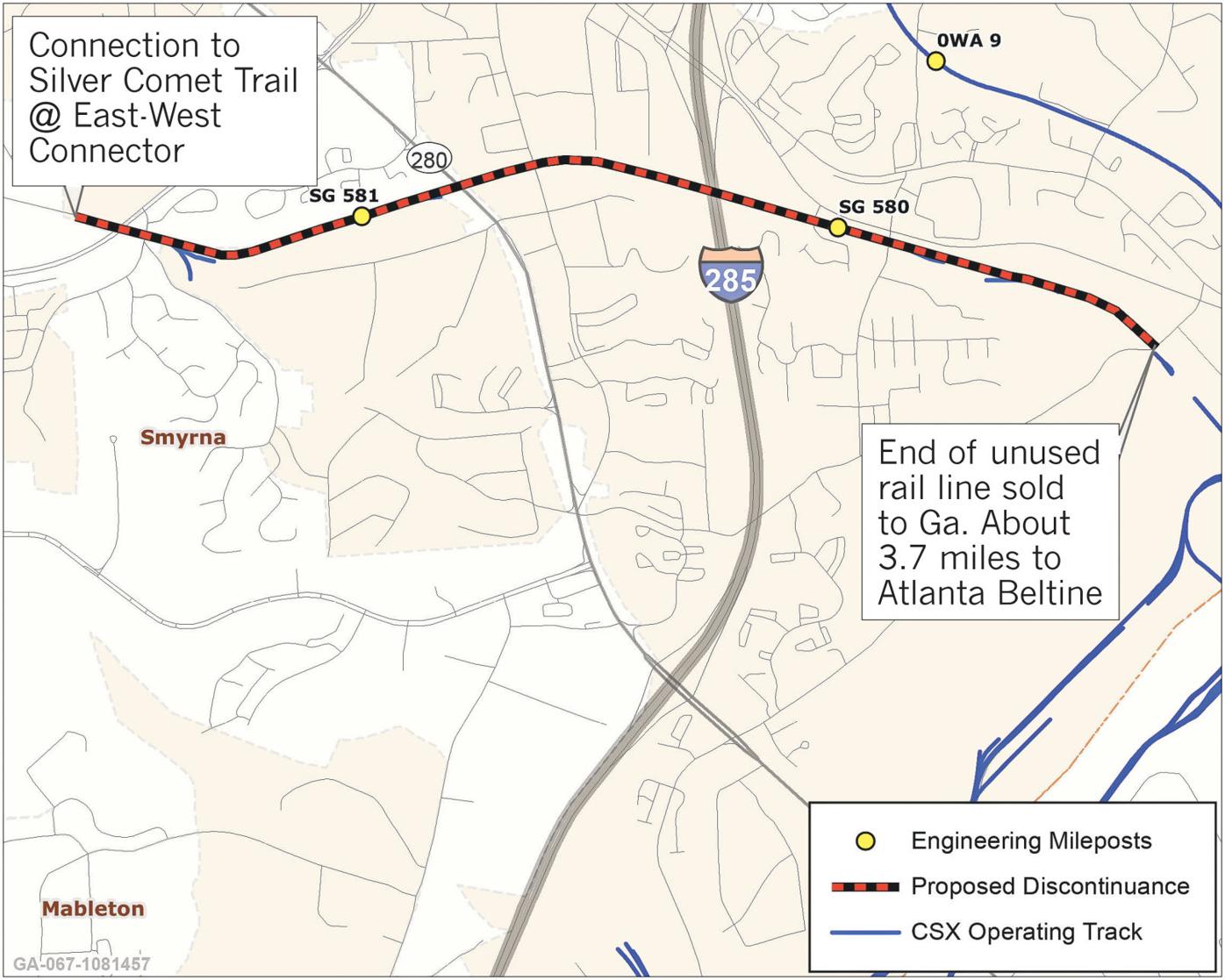 This map shows the 2.3 miles of unused train tracks that CSX has given to the Georgia for $10 as part of a new lease between the rail company and the state. Advocates want to use the property as part of a plan to connect the Silver Comet Trail to the Atlanta Beltline. The unused portion starts near the Silver Comet Trail’s intersection with the East-West Connector and runs to Plant Akinson Road.

SOUTH COBB — The Silver Comet Trail could soon be getting a little longer, inching toward a connection with Atlanta and the Beltline there.

The two trail systems are presently separated by about six miles, according to Eric Meyer, planning division manager for the Cobb Department of Transportation.

There are several options under review about how best to bridge those miles, but part of the gap may soon close.

On Sept. 4, rail company CSX agreed to convey to the state 2.3 miles of unused rail to be used to extend the 61.5-mile Silver Comet trail for $10.

The portion of the unused rail line that will become part of the trail runs from the Silver Comet’s intersection with the East-West Connector to Plant Atkinson Road near Atlanta Road, is overgrown and unrecognizable as a rail in some spots.

But once it is spruced up, it will be a step toward connecting Cobb with Atlanta for bikers and pedestrians. That’s big news, Meyer said.

Meyer said he does not know when that connection will come, but it is coming.

He said the goal at the moment is to have the trail go down to the Chattahoochee River by 2021. Atlanta and the Path foundation, a group that seeks to promote trails in metro Atlanta, will work on getting a path from the Chattahoochee to Centennial Olympic Park and the Beltline. The first step will be turning the newly acquired rail into a walkable trail, a project for which there is not yet a concrete timeline.

“Like any other trail project or road project, we first have to produce engineering designs,” Meyer said. “There will likely be some right-of-way acquisition if we have to run the trail along Atlanta Road for a stretch. And then construction, so there’s the usual three big steps for us: design, right-of-way and construction. If we’re going to use local dollars, SPLOST dollars and philanthropic dollars from the Path Foundation, it’s possible the timeline will be a little shorter than if we used federal dollars.”

In its Greenways & Trails Master Plan approved by commissioners this spring, Cobb County estimates that its 3.38-mile portion of the “Connect the Comet” project would cost an estimated $9.8 to $10.7 million to construct, though the estimate does not include engineering, land acquisition costs, utilities or special studies.

The same contract that passed the 2.3 miles of the rail line to the state also stipulates that the government will have the right of refusal to purchase another 4.3 miles — that is, if CSX decides to sell that property, the state will have the first chance to buy it.

Ed McBrayer, head of the Path Foundation said his foundation and Connect the Comet, a citizens group that aims to make the connection to the Beltline, still have some irons in the fire with CSX, but declined to elaborate.

“This is a negotiation process, and in time, it will be determined whether or not we’re successful,” he said. “We would like to think we will have future transactions that will happen with CSX, and that’s as far as I want to go with that.”

Powder Springs Mayor Al Thurman said he has long seen the trail as a big booster for the city — the city is in the final engineering phase of building a downtown park with a trailhead to the Silver Comet.

“The Silver Comet is a big, big benefit to the city of Powder Springs,” he said, “Certainly if we can get a connection to the Beltway, we’re just going to be excited about that. I think it would just be a great opportunity for the city of Powder Springs to have that. Approximately 100,000 people are on the trail annually, to have them coming through our town, we see that as a benefit to our city and our citizens.”

McBrayer said connecting the two trails will be good for more than just nature-lovers, bicyclists and hikers. It will also be a help for commuters.

That means healthier citizens and fewer cars on the road, he said.

For some, like Roberta Cook, one of the leaders of Connect the Comet, that connection cannot come soon enough. She called the deal “woefully inadequate.”

“Connect the Comet has documentation showing the railroad track over the CSX Chattahoochee River bridge to Collier Road in Atlanta has been unused by CSX for years,” she said. “Connect the Comet delivered a petition to Governor Deal's office on June 28, 2017 with over 4,000 signatures requesting acquisition of all the unused CSX track— about 6 miles … but we only received about third of that request. We question why this important resource is being withheld from public use, when there is high demand for pedestrian recreation and alternative transportation.”

But McBrayer was optimistic more good news would be forthcoming in the near future.

“I think you’ll see some big things happen in the next six months,” he said. “I think we’ll be well on our way to making this connection.”