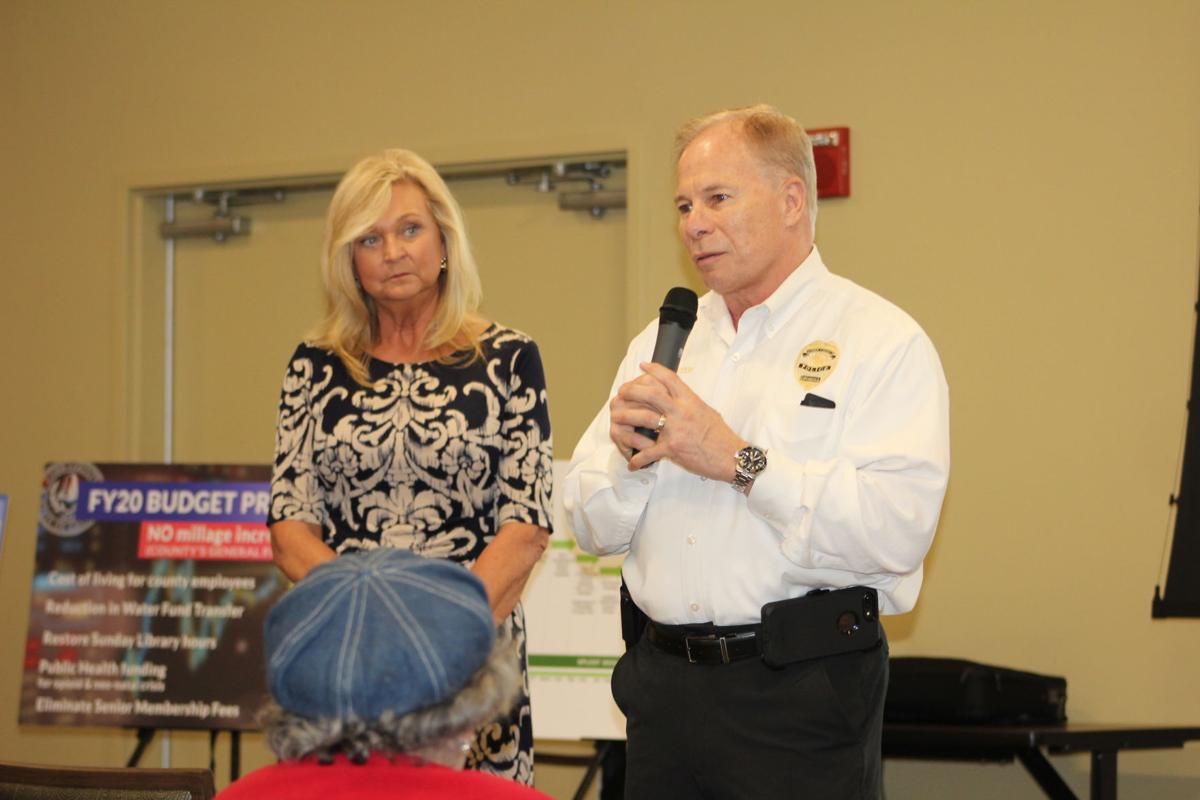 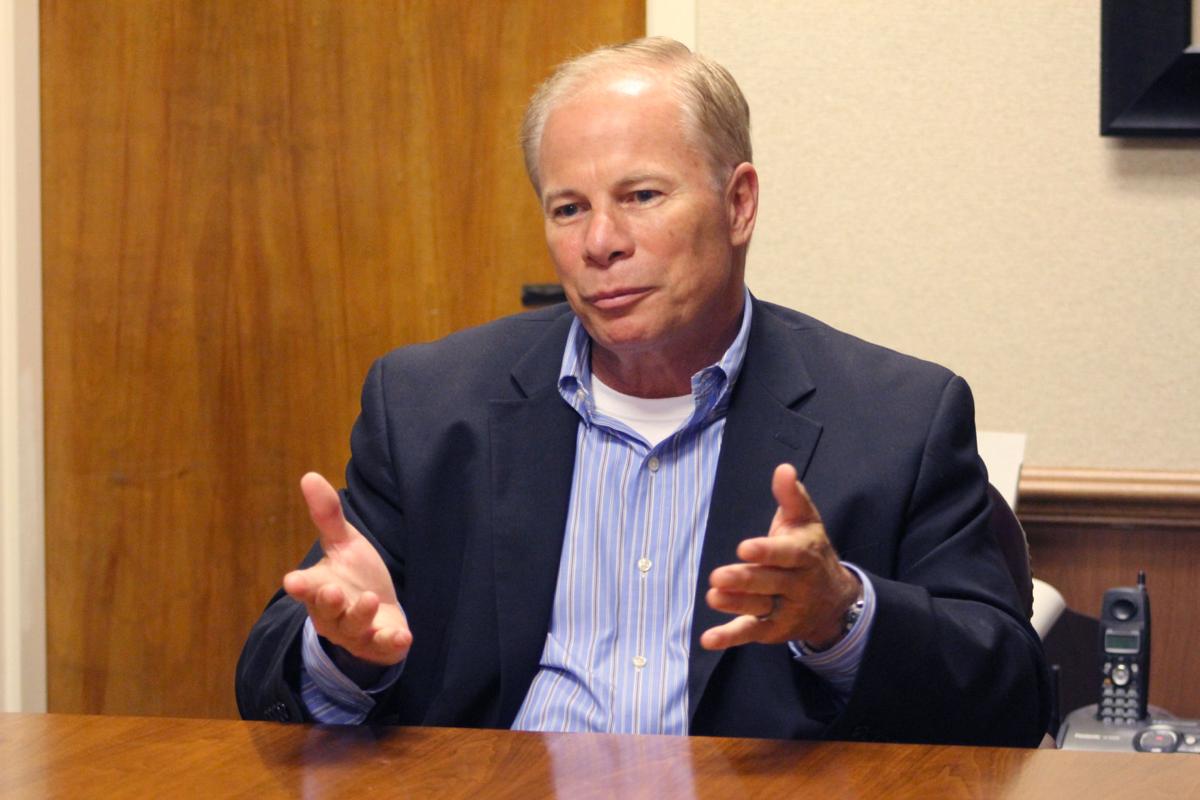 Michael Register sat down with the MDJ in 2017 after being named the finalist to become Cobb’s police chief. Register, who became chief in June of that year, became public safety director in April but will step down at the end of August due to family issues, the county announced Tuesday.

Michael Register sat down with the MDJ in 2017 after being named the finalist to become Cobb’s police chief. Register, who became chief in June of that year, became public safety director in April but will step down at the end of August due to family issues, the county announced Tuesday.

After nearly two years of leading the Cobb Police Department before becoming head of public safety, Michael Register is leaving the county better than he found it, local leaders said Wednesday.

In a news release sent at about 11:15 p.m. Tuesday, the county announced Register had submitted a letter of resignation, citing “personal matters will require his immediate attention and will force him to move out of Cobb County.”

His announced last day will be Saturday, Aug. 31.

The Cobb Board of Commissioners selected Register, then the county’s police chief, to be public safety director this past April. But his impending departure will see county leadership soon begin a search for a new head of the department less than four months after he was tapped for the role.

“I was deeply honored to be police chief and public safety director and appreciated the support of the board and county manager,” Register said in Tuesday’s release. “I regret personal issues are tearing me away from this job, and I leave with a sense of accomplishment.”

Register brought a 30-year law enforcement career to Cobb when he became the county’s police chief in June 2017. In May, Deputy Chief Tim Cox, who had been serving as interim police chief following Register’s promotion, was officially selected to succeed Register as head of the police department.

Register was police chief and later public safety director amid strong outcry earlier this year from current and former public safety personnel and their supporters over what they said has been lagging pay in the county compared to surrounding metro counties and cities. The salary issue has been a factor, pay increase proponents said, in county personnel taking employment with other metro Atlanta governments.

“He was there at a very difficult time, when we have officers moving on to other places and budget constraints. He’s done a good job of navigating through all of that,” said Commissioner Bob Ott, the board’s liaison to public safety, who classified Register’s tenure as a “positive impact” on Cobb.

“I think the single biggest thing I would say I’ve seen is his push towards community policing,” Ott added. “That has been something the public had said they wanted, and I know especially in south Cobb, I’ve heard a lot about what he put in place with that.”

Ott was the sole vote against Register’s appointment as police chief in 2017, saying he disapproved of the process that led to Register’s selection, not Register himself. Ott was also the lone dissenter in the vote to make him public safety director, saying he believed the money associated with the position’s pay needed to go toward fire and police to improve their salaries.

Cobb Chairman Mike Boyce lauded the former chief’s implementation of “faith forums,” to which pastors, staff from religious institutions and community members were invited to speak to law enforcement on topics such as church safety, crime and gang activity.

“(Cobb) is a county that’s conservative but has a deep religious foundation, and he tapped into that,” Boyce said. “I’ve spoken to many ministers that went to them, and the comments are astounding. ... They appreciate that he’s coming to them, that he recognizes the impact they have throughout the community, because we have a lot of churches in this county and a lot of them have large congregations. (And) he realizes how we deal with law-abiding citizens goes to the values that they reflect.”

Register had also played a major hand, Boyce said, in the 7% pay increase for public safety personnel that will be implemented into the county’s fiscal 2020 budget. When the chairman initially introduced his budget this winter, it had been proposed at 3%. As Register began his tenure as director, he urged that number to be increased.

“Through the budget process, he made it clear to the commissioners why we needed to do more, and then he brought the reasons … and fortunately, we had enough votes to get this through,” Boyce said.

Deane Bonner, former president of the Cobb NAACP, said Register’s departure would be “a total loss for Cobb County,” saying shortly after hearing the news that it will be “a real shock to see him go four months into the leadership of public safety.”

“Those are the kind of changes we were looking forward to (in) making public safety what it’s supposed to be. There’s certainly a new respect within the African American community for law enforcement based on Chief Register,” Bonner said, adding that Register had showed that the department and county as a whole “needed to be more community-based.”

“At Juneteenth, he was there and so was his head people. It’s very important for our community to see police officers and hierarchy in common settings or regular settings, where you’re not with your hands behind your back. I think you lead by example, and I’m saying that based on Register because Register was seen in our community,” Bonner said. “Juneteenth is so open and so inclusive, being on the Marietta Square with thousands of people there, and these are people that look like me, and he’s there to say ‘Hello.’ Leading by example, we haven’t always had that. We certainly have not had that.”

That precedent of mutual respect, Bonner said, is one she hopes will continue under Chief Cox and Register’s eventual successor.

“(Register) showed that we do have to be each other’s keeper, in a sense,” she added. “In order for us to respect police officers, we need to see them not as an advisory for us, but as a partner in making all of our lives better, because we certainly want police officers to go home to their families after they get off of work just like everyone else.”

An interim successor to Register had not been named as of Wednesday afternoon, with County Manager Rob Hosack saying in Tuesday’s release that Cobb leadership would be “considering our options” on the position in the coming days.

“We understand that family comes first to Mike and are saddened that he will leave us,” Hosack said. “He did tremendous things in his short time in the position.”

Boyce said Register had been “transformative” during his time in Cobb.

“Mike and Commissioner (JoAnn) Birrell and Rob and I sat down with him yesterday morning, because obviously I was going to try to see what I could do to keep him,” Boyce said, “but he has some really important family matters that he wanted to address, and if you would have been there, you would’ve seen he’s doing the right thing. Family comes first, and in this case here, we simply said, ‘Anything we can do to support you, just let us know.’”

Register, who could not be reached Wednesday for additional comment, said in Tuesday night’s release that he would “always treasure my time in Cobb County.”