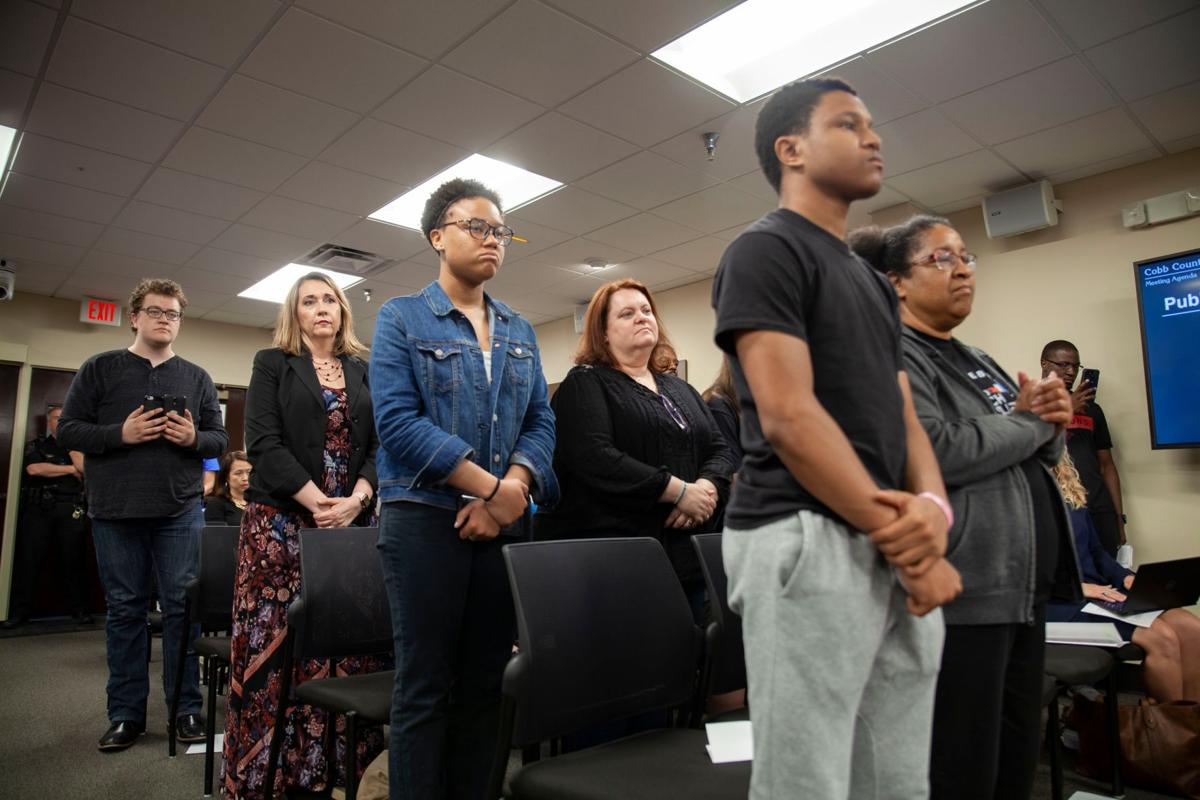 A group of Cobb citizens and students attended Wednesday's school board meeting in support of Pebblebrook High School, wearing black and standing together when a Pebblebrook speaker approached the podium.

MARIETTA—Pebblebrook and Campbell High School students, staff and community members have again put a spotlight on what they say are unacceptable conditions at the schools.

Seven speakers at the Cobb school board’s evening meeting Wednesday addressed issues ranging from overcrowding to deteriorating bathrooms to safety hazards affecting Pebblebrook and Campbell high schools, Both schools are slated to expand through funding from a Special Purpose Local Option Sales Tax for education, approved by voters in 2017.

Comments from the public spurred an atypical response from Chris Ragsdale, superintendent of Cobb schools, who said there would be good news coming for the Pebblebrook and Campbell communities.

Pebblebrook High SchoolAlex Ash-Green, a Pebblebrook student, said schools like his lack necessary funding and “are unable to provide students with even these most basic necessities, which they are entitled to and which their parents pay taxes for.”

Ash-Green said many of Pebblebrook’s toilets, stall doors, sinks and mirrors are broken. He said elevators, which should consistently provide disabled students with transportation to higher or lower floors, are often inoperable.

“The voices of (Pebblebrook) students and faculty seem to fall on deaf ears... We need to be treated with a level of equity,” Ash-Green said, adding that Pebblebrook is heavily overcrowded. “We can’t just continue like this. We have too many students, and we can’t house them all.”

Anna Clay, a Pebblebrook teacher, echoed Ash-Green. She added that the school is 37 classrooms short for the number of enrolled students. Clay said the district could demolish a specific building, which she said only houses nine classrooms and has limited Americans with Disabilities Act accessibility, and expand SPLOST construction into the space.

“I know it’s expensive, but 37 classrooms short is unacceptable to me. Even after the SPLOST construction is finished, based on projected enrollment numbers, we will still be 19 classrooms short of where we should be with student enrollment,” she said.

According to 2018-19 school district projections, Pebblebrook is 687 students over capacity.

Tony Waybright, who serves on the Campbell High School council and has been an outspoken advocate for improvements to the school, spoke at the school board’s afternoon meeting. Waybright said some areas of the high school haven’t changed for decades.

“We need Class A classrooms for our school, not new gyms and new theaters. We’re glad SPLOST V is bringing some relief, but we need to get beyond doing the bare minimum,” he said. “One half of our building has sat facing Powder Springs Street as it is since it was built in the ’60s... We can no longer pile pinestraw high enough on cleanup day to hide the 60 years of inattention.”

Other speakers noted the school’s overcrowding, lack of parking and need for cafeteria facilities and food service as improvements that they felt should be better addressed in SPLOST projects.

According to 2018-19 school district projections, Campbell High School is 266 students over capacity.

Ragsdale: Good news is comingRagsdale chose to respond to public commenters during Wednesday night’s board meeting, straying from the usual meeting procedure.

Ragsdale aimed to calm the nerves of the Pebblebrook and Campbell communities, saying plans for the two school expansion projects have not yet been finalized. Both schools’ plans are being updated based on enrollment concerns, he said, but the newest plans have not yet been made public.

“We’re not going to rebuild a school and have it be at capacity the day that ... the new addition opens,” Ragsdale said.

The superintendent doubled down on that promise Thursday. Ragsdale said concerns about lacking expansion projects for the two high schools are misplaced at this point. Ragsdale said the number of students that will be accommodated at both schools after their expansion is not yet set in stone.

“Coming and saying, ‘Hey, the project is not appropriate. You’re not focusing on this area or that area,’ is really premature. ... If you’re making decisions on 10-year-old data or 10-year projections, you’re not making decisions on accurate data,” he said, referencing enrollment projections cited by speakers during public comment.

New and more accurate enrollment projections will be available next month and better decisions can be made based on that data, he said.

In response to community complaints of SPLOST funding inequity for schools like Pebblebrook and Campbell versus schools like Walton and Wheeler, Ragsdale said funding decisions are tied to the result of the district’s demographic and enrollment studies.

“I’m excited for both (Pebblebrook and Campbell), because I think once those designs are completed, I think they’re going to see that it’s going to be an awesome project in both locations — just like Osborne and the career academy,” he said.

Report: Plane that crashed, killing 4, broke up in air

Report: Rome woman charged with aggravated assault after shooting person with a shotgun