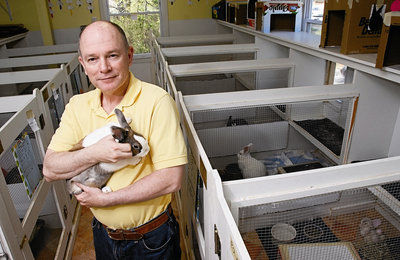 Ed Van Herik, president of the North Georgia House Rabbit Society, holds Wilson in the adoption room of the shelter. 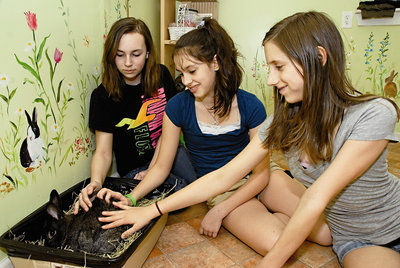 Ed Van Herik, president of the North Georgia House Rabbit Society, holds Wilson in the adoption room of the shelter.

MARIETTA - Rabbit rescuers know live bunnies are cuddly and cute, but they urge people to think carefully before giving one as an Easter gift.

"A stuffed bunny is an Easter bunny," said Ed Van Herik, a Kennesaw resident and a member of the North Georgia House Rabbit Society. "A live bunny is a 10-year commitment ...What we tell people is that if you want an Easter rabbit for your child, get them a chocolate bunny.

The society is caring for about 120 rabbits, most of them rescued from animal shelters where they would have been euthanized. Earlier this year, members opened a permanent shelter for rabbits in east Cobb, which houses about 25 bunnies. The others are in foster homes.

"We ask people to really think through what it is to get a bunny," Van Herik said. "Rabbits have special needs, so what does that mean? What supplies will you need? How do you keep them happy and healthy?"

The house rabbit society, which is part of a national network, requires rabbits it adopts out to be housed indoors, where they will be safe from predators and closer to the companionship they crave. Rabbits need at least four hours of cage-free running and playing time each day, society members say, and a diet of unlimited amounts of grass hay, pellets and water.

"A bunny is often an impulse buy at Easter - they think Easter basket, Easter eggs, Easter bunny," Van Herik said. "They're wonderful pets, but they're as much work as a cat or a dog, and if you're not prepared for that it's probably not going to be realistic."

Unfortunately, the rescue organization has found that many people buy the animals at Easter, just to abandon them come summertime.

While Van Herik can't say enough about what wonderful pets rabbits make, he warns that children under the age of 8 should not be expected to be the primary caretakers of the animals he calls timid, loving and adorable. But he warns that rabbits don't behave like cats or dogs, and likely won't come if their name is called. They are fairly independent creatures and don't usually like being held, but love being petted.

Van Herik also says that one of the worst things to do to a house rabbit is to move it outside or free it into the wild.

"These rabbits have spent all their life indoors, they're about as likely to survive in the wild as you or me," Van Herik said. "You don't make them free, you make them food."

Cobb Animal Control workers agree that rabbits, or any other animal, should not be given as gifts.

"If someone receives a rabbit or a duck for Easter, the owner still needs to have the animal properly vetted. A veterinarian will be able to guide the owner in proper care," said Officer Nathan McCreary, a spokesman for Cobb Animal Control. "As with any pet ownership, we encourage a healthy and long-lasting relationship between pet owners and their animals, and unless the recipients of the pets are willing to take on the full responsibility of pet ownership, we discourage giving them as gifts."

For people who are interested in rabbits, Van Herik suggests that they visit the North Georgia House Rabbit Society Web site at www.houserabbitga.org for more information and then, after serious consideration, give the shelter a call if they're ready to take on the commitment.

Residents look for hope and pray against violence on Inauguration Day

Austin commits to relying on career civilians to craft Pentagon policy, if he becomes defense secretary