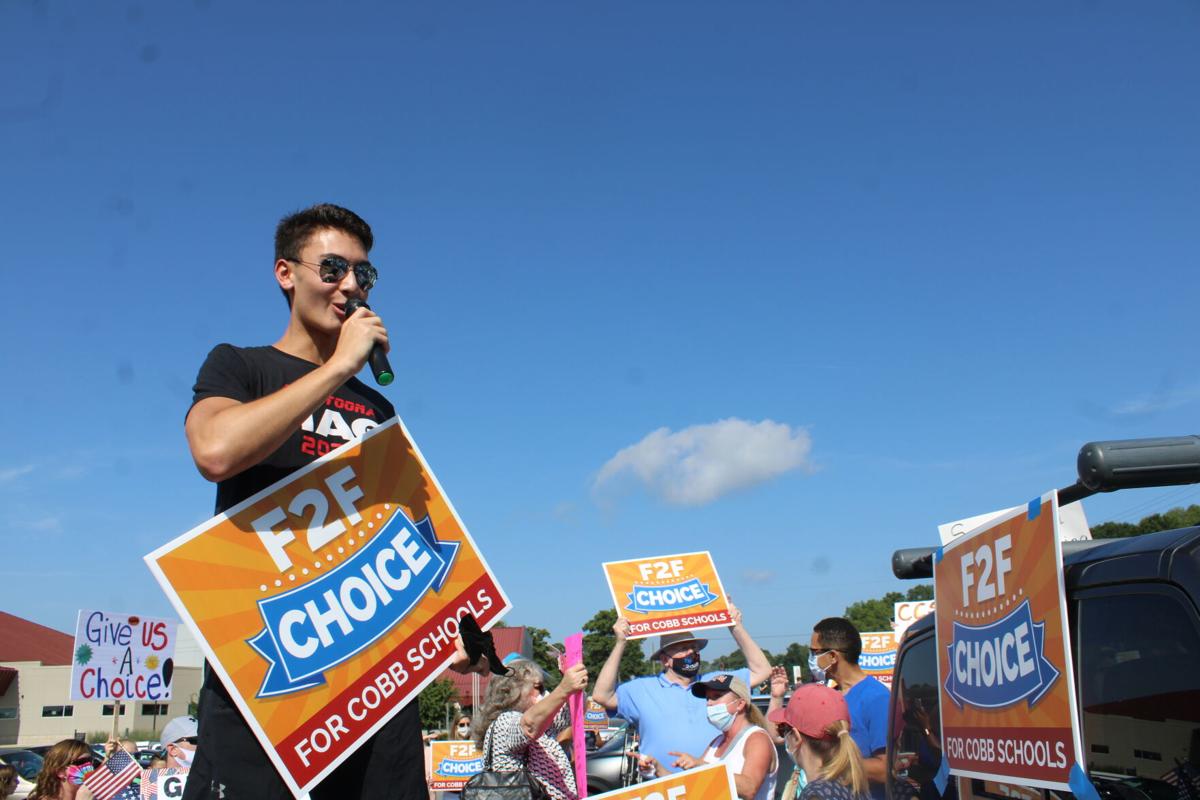 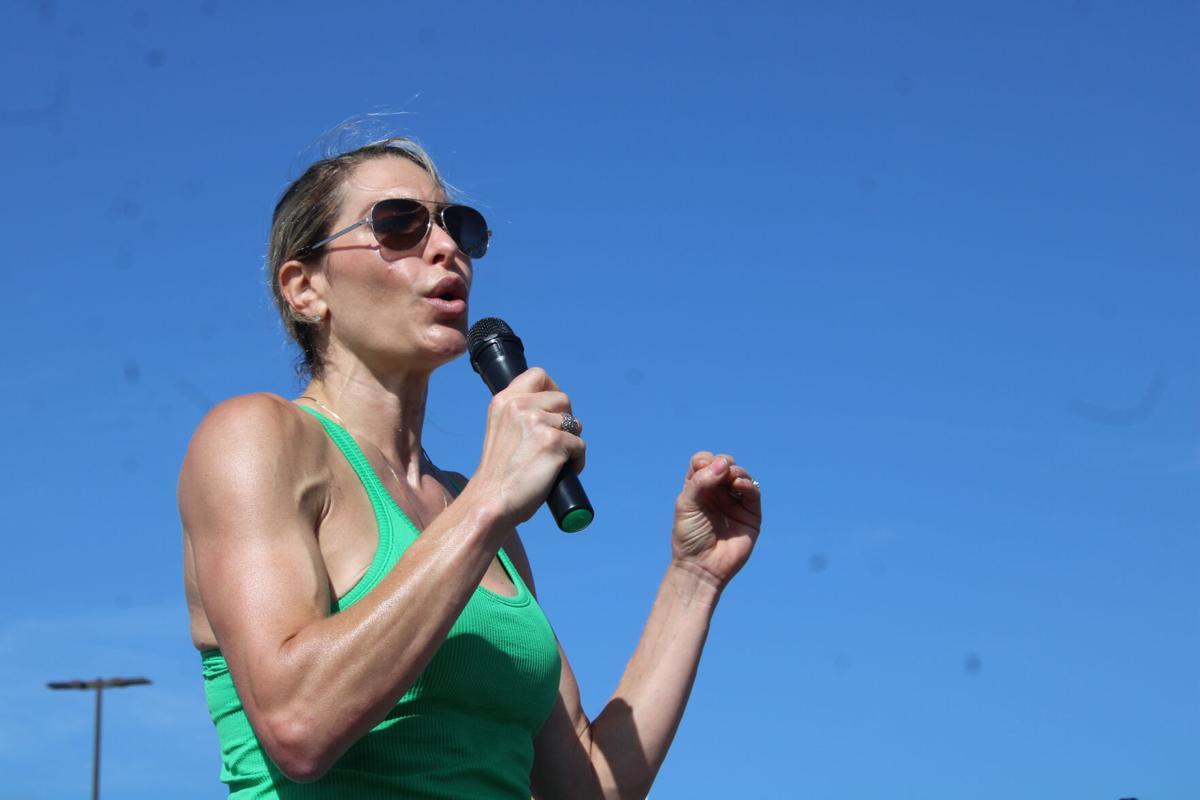 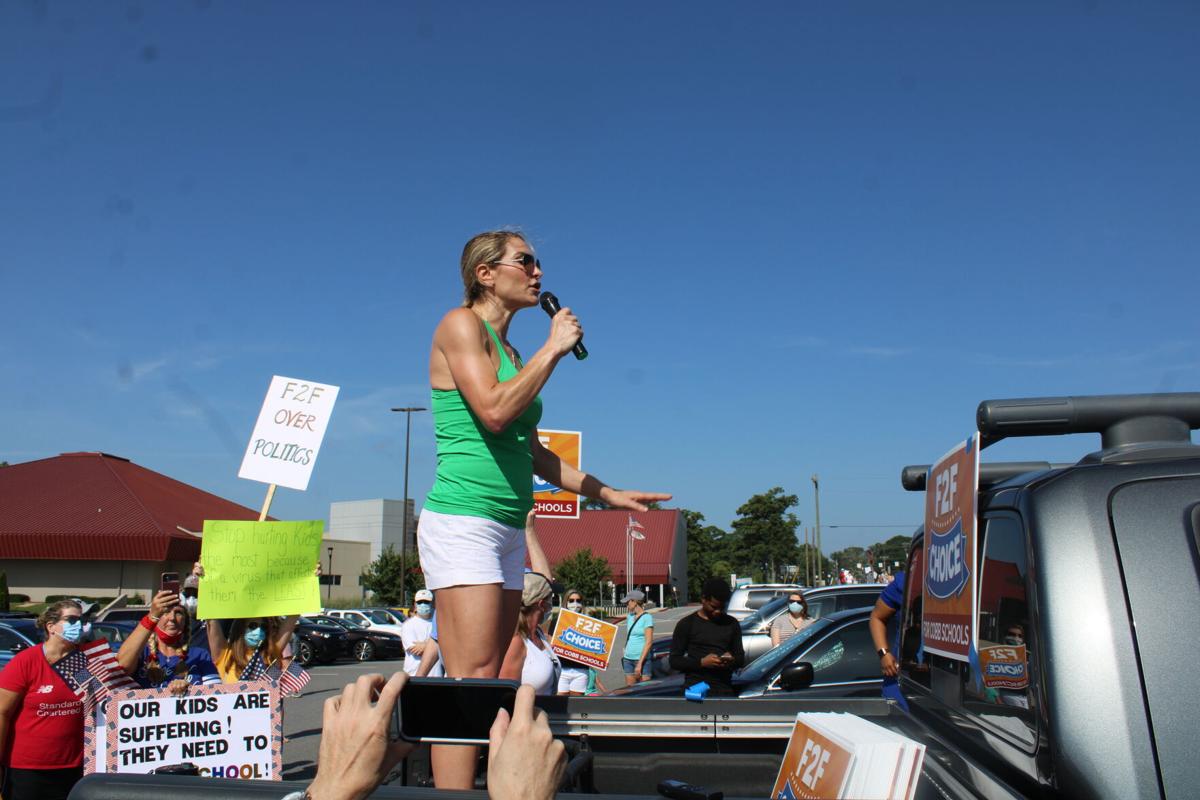 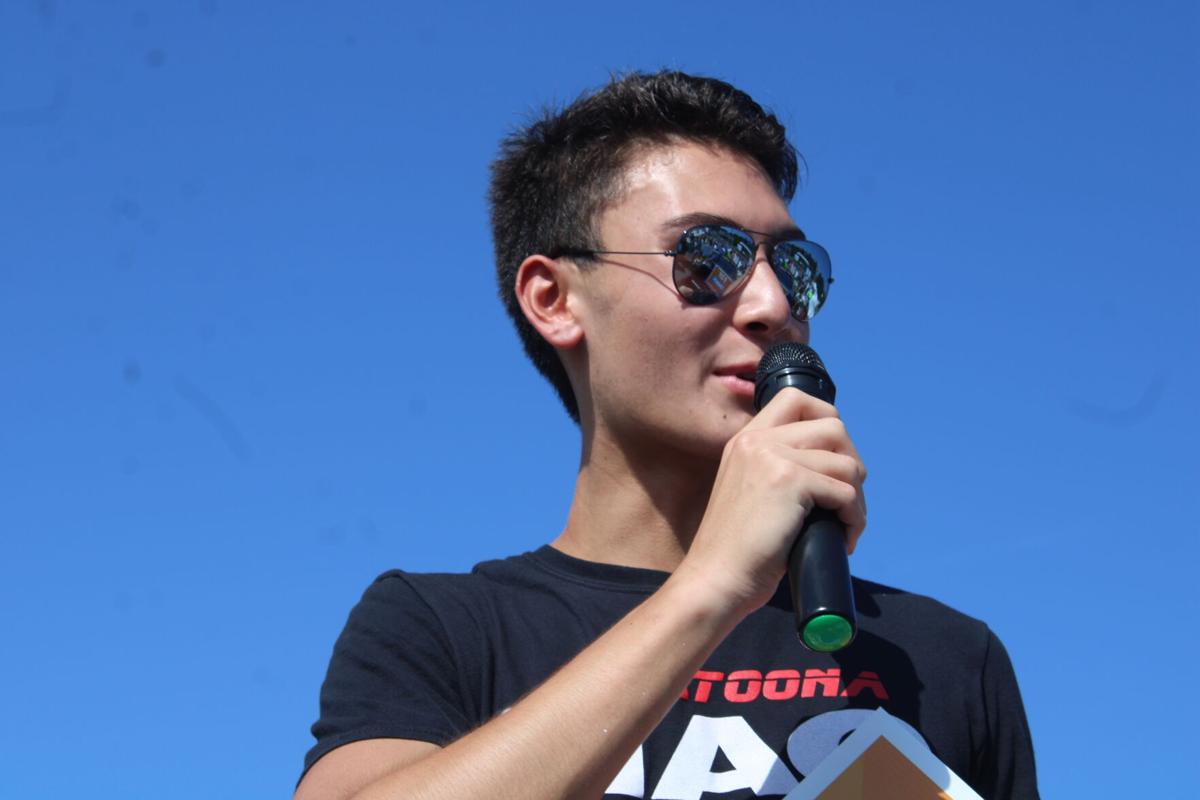 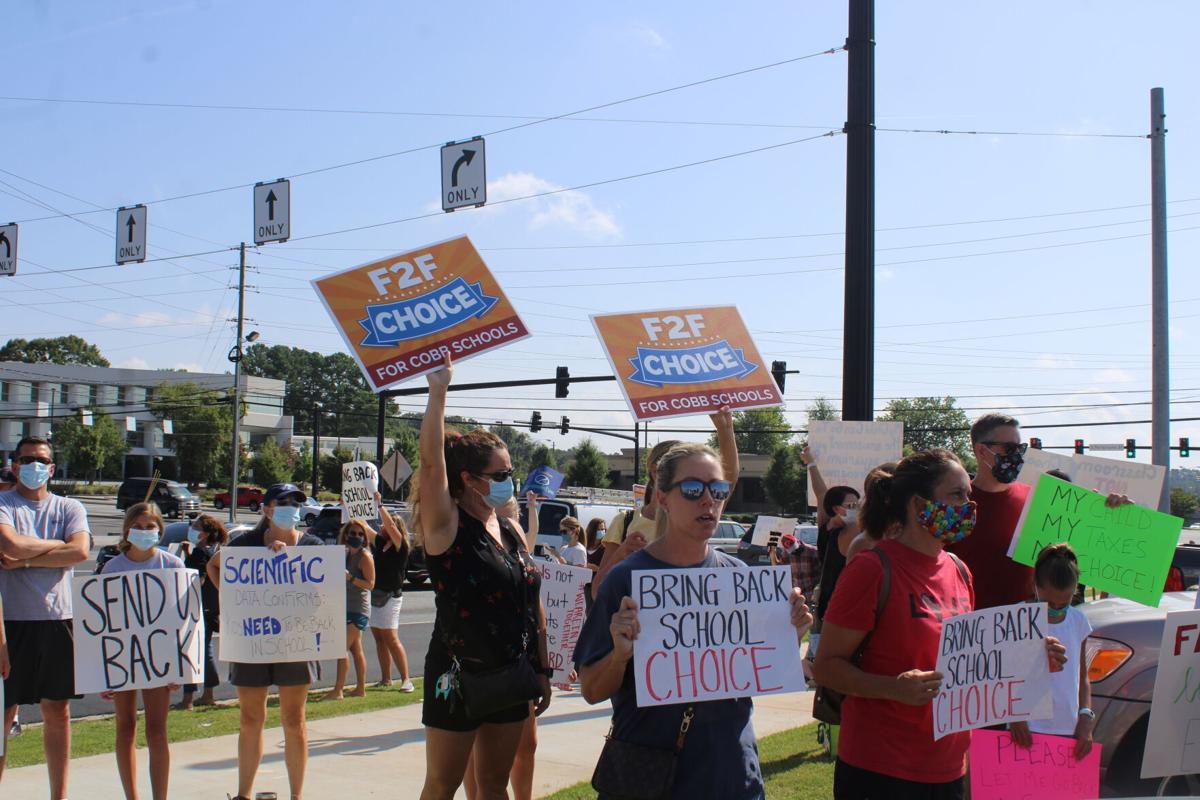 Protesters call for face-to-face classes in Cobb Schools on Saturday. 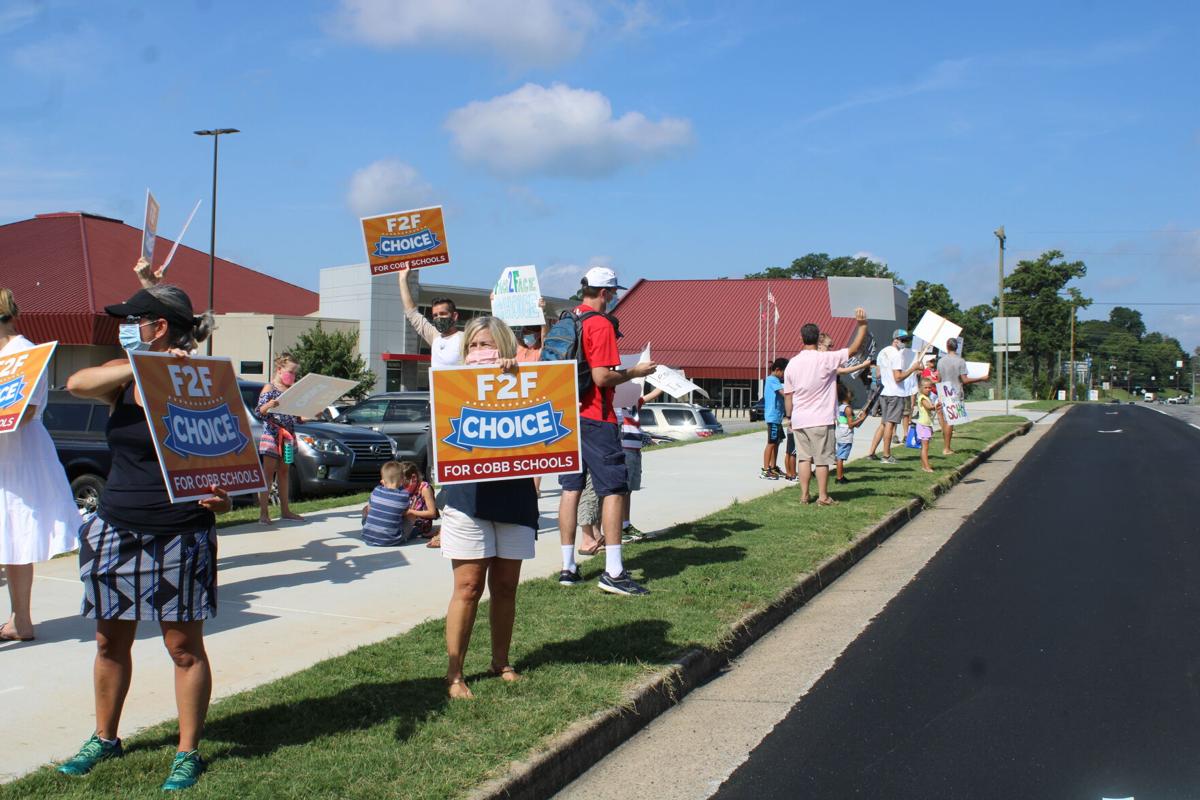 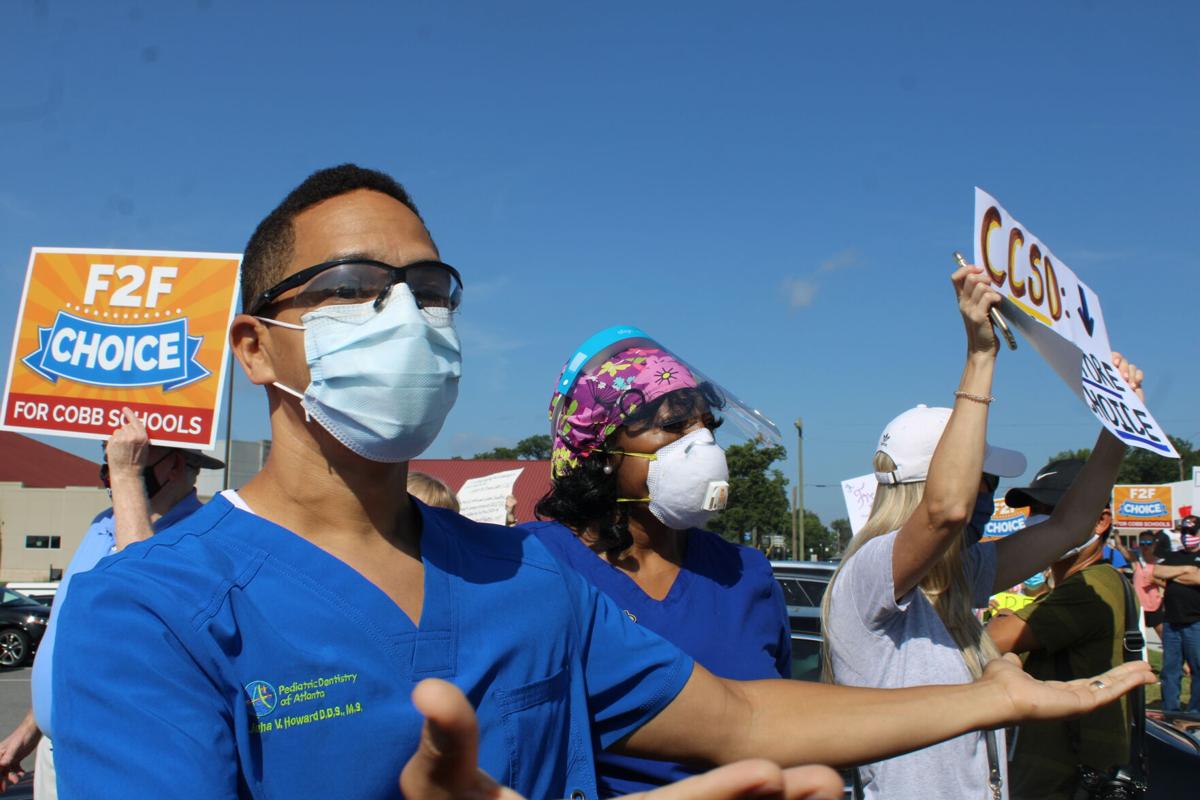 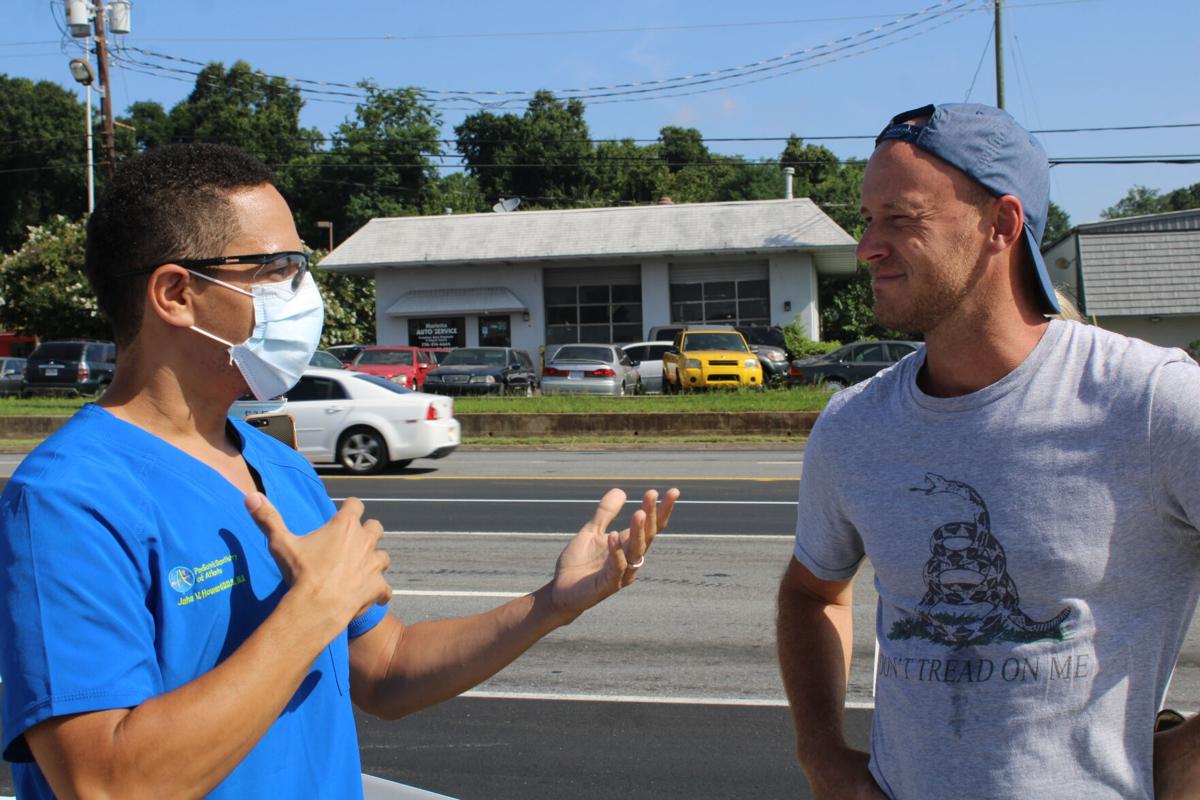 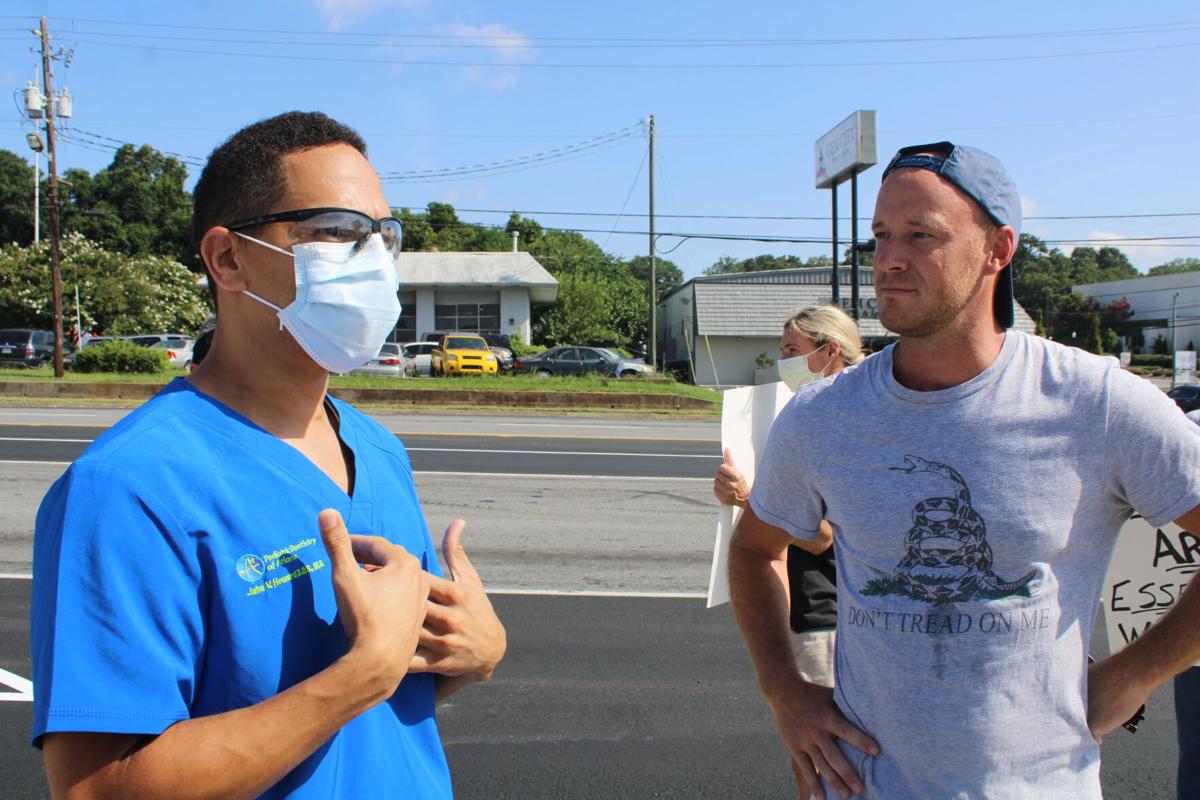 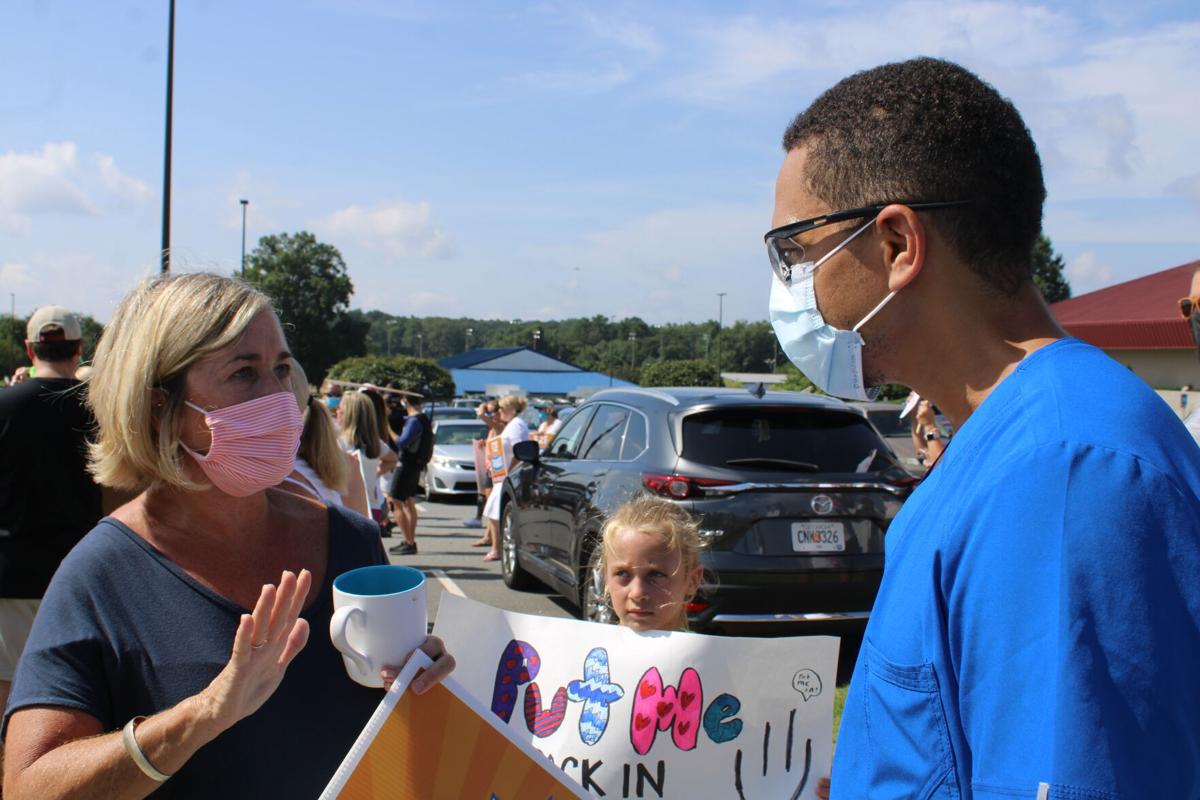 Protesters call for face-to-face classes in Cobb Schools on Saturday.

MARIETTA — Dozens of protesters, including parents, students and other community members, rallied at the Cobb Civic Center on Saturday to call on the Cobb County School District to reinstate the option for face-to-face classes.

Some fear their students will be left behind if classrooms do not open for in-person learning this fall, despite the threat of the coronavirus.

Speaking into a microphone from the bed of a pickup truck, Amy Henry, a mother of four students in east Cobb, said families should have the choice to send their children to in-person classes.

“We are here for our children to be able to have their community back,” Henry told the protesters in the parking lot. “We have 113,000 students, and they will be left behind. This choice that was taken away from us, from our children, from the teachers, it is unacceptable.”

Henry is a founding member of the Cobb County Parents for Choice Committee, a group of 20 parents urging the district to provide the option of in-person classes when school starts on Aug. 17. She said the parents are asking the district for transparency, information about how the decision to start online only was made, who advised Superintendent Chris Ragsdale to start the year online only and what the strategic plan looks like to reopen schools.

“There is no plan,” Henry told the protesters. “Other school districts, they have their plans set out. There’s transparency. The board at Cobb County, there’s no transparency because they don’t have a plan.”

Cobb school board member Jaha Howard attended Saturday morning’s protest, not to join the protest, but to speak with the group about their concerns.

Howard said the school district needs to be more transparent in delivering information to families, and during the July 16 meeting he voted for board member Charisse Davis’ recommendation to hold a special-called public meeting to discuss health and safety before their next scheduled meeting on Aug. 20. The motion failed 4-3 as members David Morgan, Howard and Davis voted to approve the extra meeting.

“Our families, our county, deserve more frequent communication and more public communication, which is why I voted in favor of the motion to have a special board meeting to bring our local public health experts in and have the superintendent and his team and the board, virtually or face-to-face, come together so everyone can hear it at the same time,” Howard said. “If we can get similar information, we have a higher chance of getting on the same page moving forward.”

Allatoona High School student Ryder Kim spoke from the bed of the pickup truck, saying he wants to return to face-to-face classes.

“I just want the choice to go back to school,” Kim told the protesters.

“This is where we build the foundation of excitement for learning,” Hadden said of schools, “and now we’re building a falsified environment, an isolated environment where children are afraid to be around others.”

While protesters took turns speaking from the bed of the pickup truck, Howard spent the hourlong protest speaking with individual protesters. Protest organizers did not allow him to address the whole group with the microphone.

“(I was) extremely disappointed that I was not allowed to speak to an active audience, to share information and even correct the record, because there were some things that were completely off, and also affirm some of their concerns that were made today,” Howard said. “I did have several conversations to the side with people who were willing to talk with me one-on-one, and I thought that was really constructive. … We may even disagree on where we land, but at least we can agree that there’s thought and care that went into the decision.”

Connie Jackson, the president of the Cobb County Association of Educators, said Cobb schools must look out for student welfare, but also should prioritize information from Dr. Janet Memark and Cobb-Douglas Public Health over national advice that may not apply to each community.

“To judge the safety of our schools in Cobb County, the professional that is over that is the best authority, and she says that the conditions are not right, right now, for us to open schools,” Jackson said in a phone interview with the MDJ. “It may be totally safe in Idaho to send your child to school, but in Cobb County it’s not, and we know that because the person in charge of all this about COVID and all of the health stuff said ‘No, it’s not. Our numbers are too high and it’s not safe.’”

Jackson said she wants students back in school, but the district must also listen to public health officials in Cobb County. She also noted how Wellstar Kennestone Hospital has a limited number of available beds due to an uptick in patients suffering from COVID-19. In a virtual event with county officials on Thursday, Memark said hospital capacity is stretched.

“That’s terrifying,” Jackson said. “If we have an outbreak in the schools and people have to be hospitalized, there may not be room.”

Henry said the benefit of getting students back in schools outweighs the risk of the coronavirus.

“Kids need to be around the community,” she said. “We’re just saying ‘give us a choice.’”

Small minority of parents. But if they can find volunteers to teach and maintain the school and keep a safe distance let them be the guinea pigs. Just a note there have been over 11000 cases reported in Georgia over the past three days. We are heading toward Florida levels per capita. Maybe you should wait until cases go down to just a thousand or two per day.

This is more then simply sending your children to school. If one child or one adult tests positive, the teacher is required to contact trace who the child has been around and all of those people have to be notified and quarantine for 14 days. This is not as simple as it seems. I also understand these same parents keep stating kids aren’t getting it but they are and it is about the teachers as well. We are not the only district but almost every district in the Atlanta area are going virtual. These parents need to get their facts straight. The teachers are being trained for three weeks so they are well prepared. CCSD community is in good hands.

Your statements are based on Junk Science, long ago disproved as false.

Another day and again more than 3000 new cases in Georgia. And check out the story about the the Cobb GOP Breakfast yesterday with Doug Collins. These characters went to a meeting with few masks and little social distancing. I’m getting pretty mad that these idiots don’t care about possibly killing someone by passing along a highly contagious disease. They don’t care about their friends, imagine how much they care about you. https://www.mdjonline.com/news/doug-collins-campaigns-for-senate-at-cobb-gop-breakfast/article_c98fb108-d413-11ea-80f4-679ac5e8e7c7.html

Pastor tells parishioners 'You'll Be Back' in viral parody